There we were, perched atop a beautiful beast named Bunmie in the heart of Phuket’s forest. I had such a love for elephants and couldn’t believe that here I was with my husband riding on the back of one. My feet rested on his rough skin and his bristly hairs tickled my toes. He moved steadily through the forest with its seeping rubber trees and stopped occasionally to chew leaves. From this height, we could see the butterflies which flew away from the ground’s flowers and touch the bark of the trees as we passed. When we reached the viewpoint, we towered above the lower bushes and looked out over Phuket’s curvy coastline. I was even allowed to sit right on his strong neck as he slowly walked down the earthy hill.

The strong muscles in the neck of an elephant make it a better suited spot to carry weight as opposed to their spines.

My husband and I were on honeymoon and like so many tourists and honeymooners before us we were drawn to the romantic notion of trekking through the jungle on an elephant’s back. We were giddy with excitement and wandered around looking at the elephants in the camp wondering which one would be ours for the journey. I’d grown up with a fierce love of nature, the outdoors and animals thanks to my Dad who had a very special way with birds and animals and who once dreamt of becoming a vet . So when I saw the large chains around the elephant’s feet it reminded me of the elephants in the Addo Game Reserve who were unaccustomed to metal chains and used to roaming free amongst the Eastern Cape vegetation and gathering around the water holes in herds. 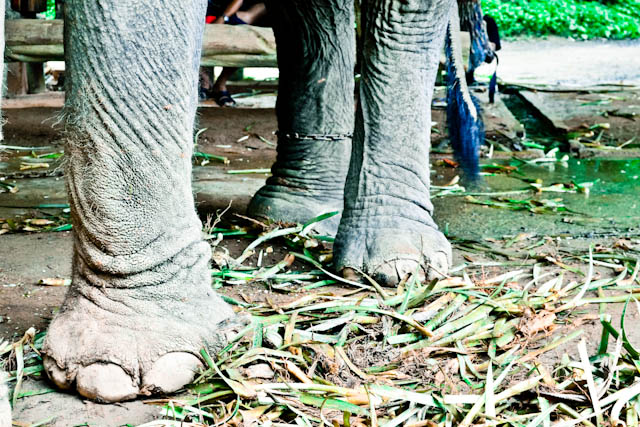 The chains of captivity.

I told myself that because they worked with these elephants daily, surely they had to be looking after them well. Our elephant was hosed down after the walk and given a lot of food to eat and this somehow served to calm my conscience. But that was until I read about the traditional Thai practice of Phajaan which means to ‘crush’. It is a process which originated amongst the hill tribes of South East Asia and India. It’s a ceremony which came about from the people’s belief that the shaman of the tribe could separate the wild spirit of the elephant from its body and yield it submissive to its owners. Sadly it is all about the torturing smuggled baby elephants with hot irons and metal spikes. It has been used on all elephants doomed for the tourism industry and also involves the starving, abusing and crushing of baby elephant’s spirits once they are separated from their mothers. This practice is widely used so that elephants will grow up becoming submissive to humans. The bull hook our guide used to curb the elephant when he stalled for too long should have been a warning sign that whilst this trek was enjoyable for us, it came at a huge price for the elephant. 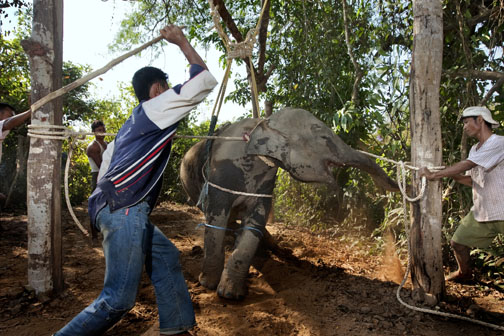 The torturous ancient tradition of Phajaan- photo by Sojourns.com.sg 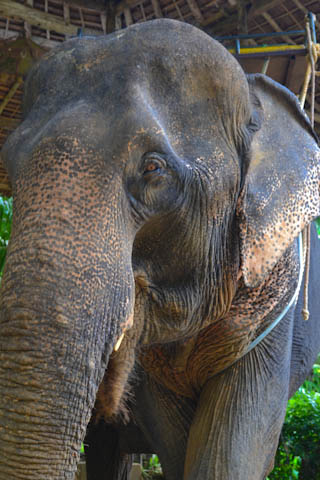 In all likelihood, this elephant was probably subjected to Phajaan as a baby. 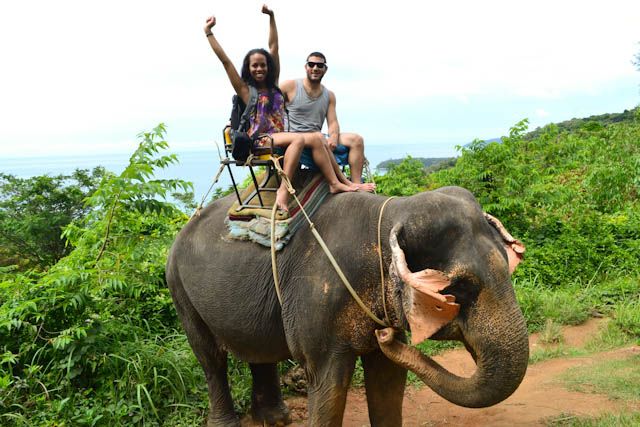 Whilst I was really happy, I’m pretty sure he was not.

With further research I discovered that aside from the childhood torture experienced by these elephants, the weight of constantly carrying humans on their backs is a heavy one to bear and is said to cause long term damage to their spines and feet. Their seats placed on their backs to make the ride for us more comfortable often results in blisters on their backs which become infected. 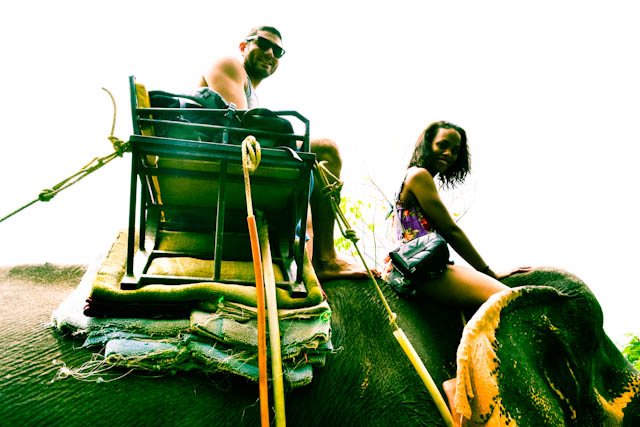 The seats that make our ride more comfortable and give the elephants blisters.

So even though I felt closer to nature and the elephant during the trek, I have learnt that I was merely one of thousands of ignorant tourists paying for a little bit of holiday entertainment at the cost of these majestic creatures who were created to roam free in the wild. What I should have done instead was visit a rehabilitation center for elephants near Chang Mai where visitors can interact with them by bathing and feeding them. And so should you… 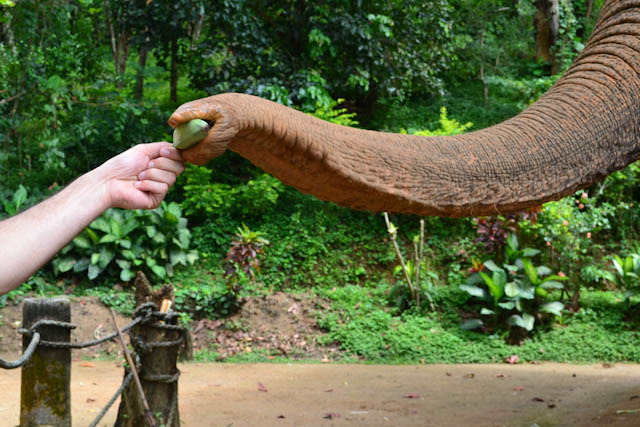 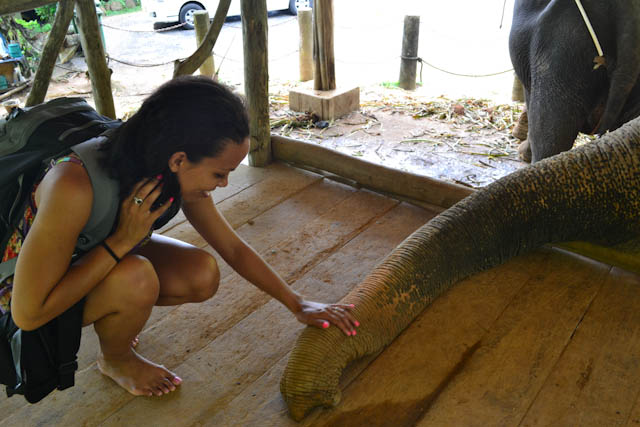 For more information read this incredible of a local Thai lady Lek, who risks her life to save the country’s fast diminishing elephant population and send working elephants back to the forest: The Elephant Whisperer

To interact with elephants, visit the Elephant Nature Park which Lek started in 1996 in Northern Thailand where elephants are rescued and rehabilitated. http://www.elephantnaturepark.org/index.htm 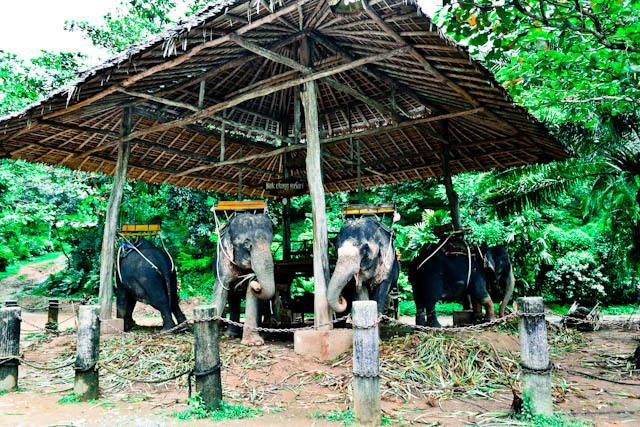 All the elephants kept at this Phuket elephant trekking camp. 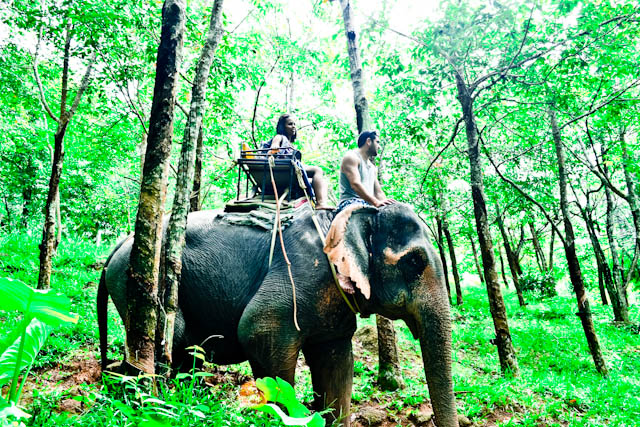 Was quite magical at the time. 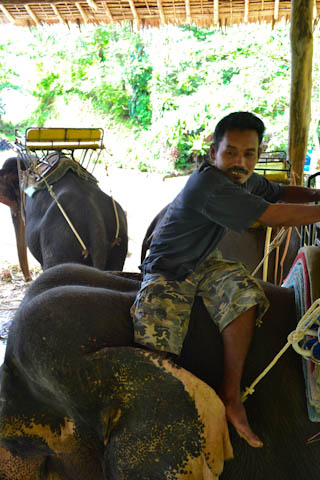 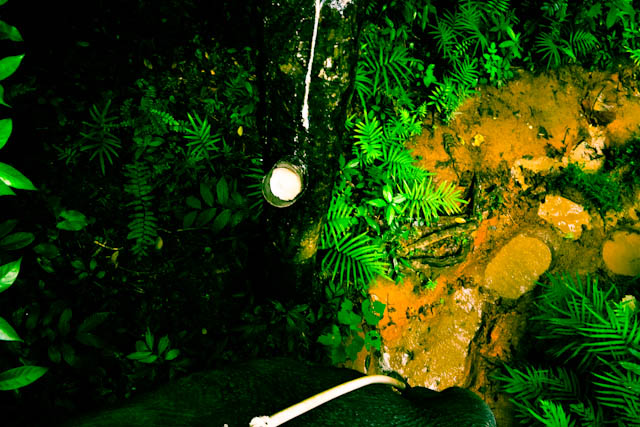 Rubber collected from the trees. 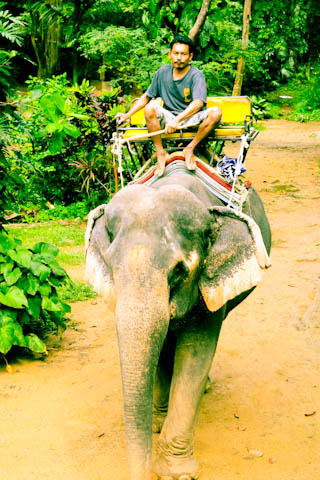 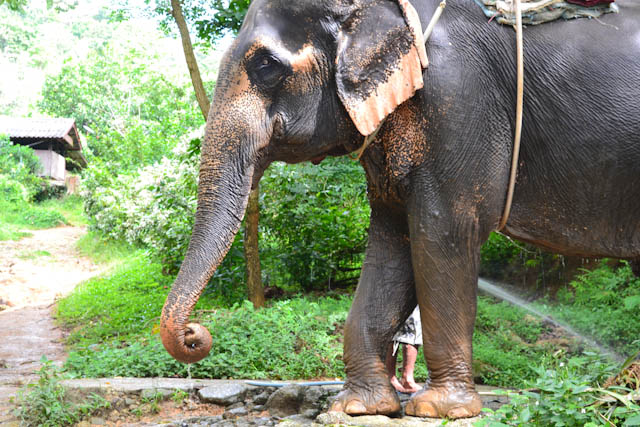 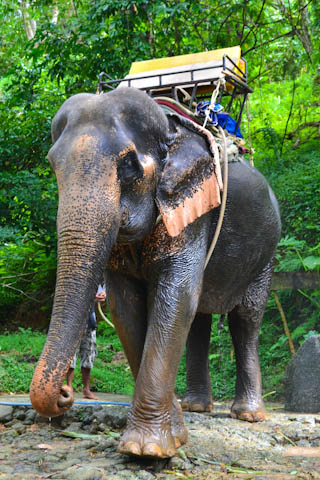 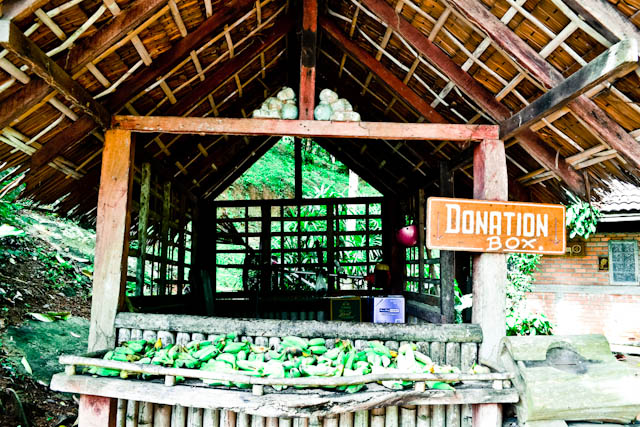 Donate money to feed the bananas to the elephants. 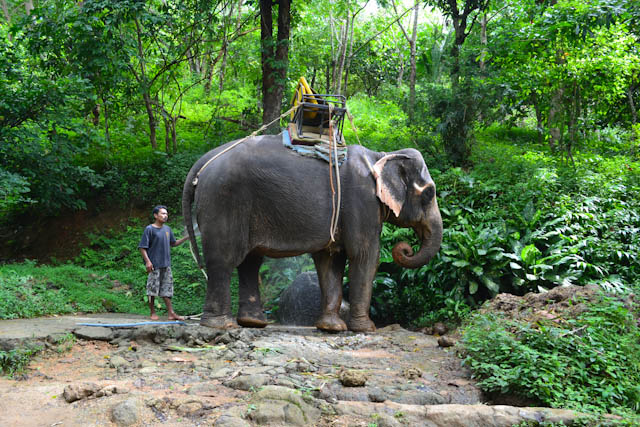 Bunmie getting a hose down.