You are here: Home / Travel / What you can expect from Edirne and Thrace, Turkey
310
SHARES
FacebookTwitterStumbleuponBufferPinterestPocketGoogleWhatsapp
Mail 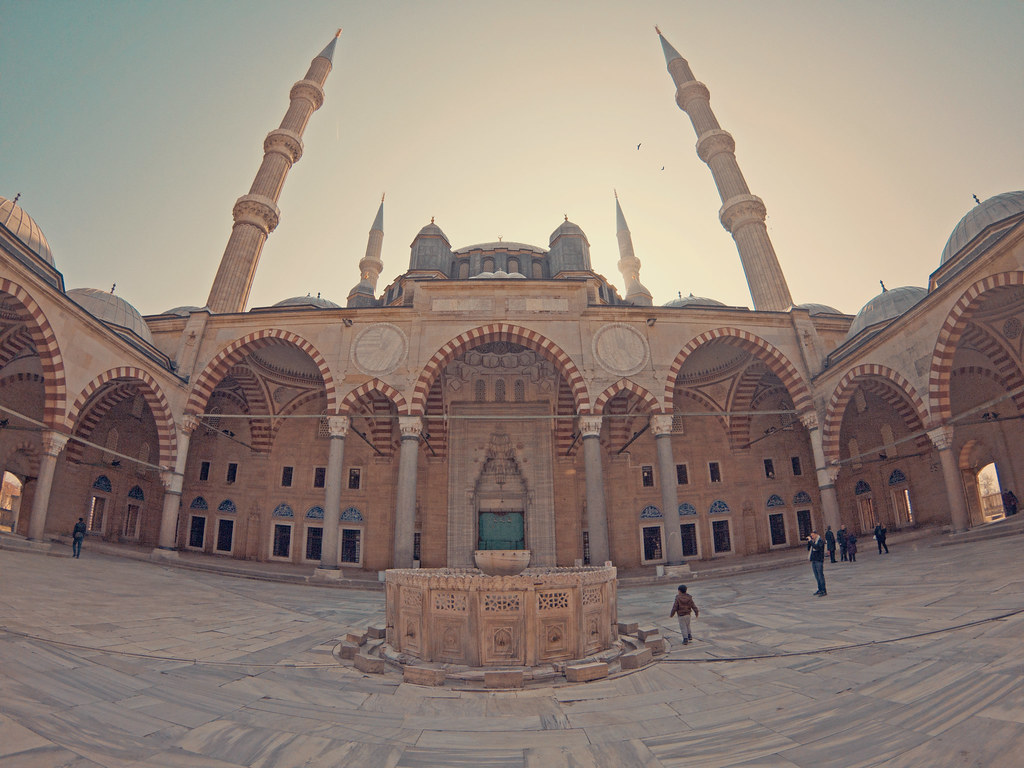 My second trip to Turkey was mostly focused on Istanbul and the World Tourism Forum once again, but this time I was offered the opportunity to head out Istanbul for two days to discover Turkey’s wine route, Thrace.

I was immediately intrigued by the fact that a muslim country had a wine route in the first place but a little research yielded the even more astonishing fact that wine and Thrace goes back to ancient times. Today Thrace is the perfect region for wine tasting, culinary experiences and the chance to visit the city of Edirne, which has a more quaint and intimate feel to it than a mega city like Istanbul. 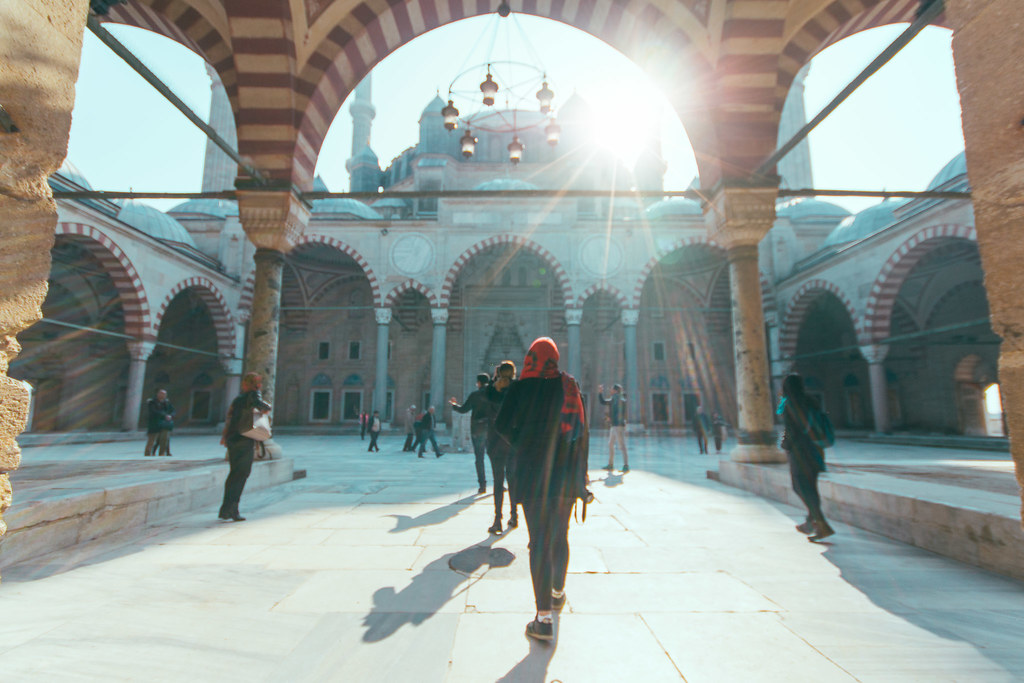 Our first stop was the exquisite Selimiye Mosque in Edirne which was completed in 1575 and still stands today as majestic as it was, when it was built nearly 500 years ago. One of the surprising facts about the Selimiye Mosque is that it actually has a slightly wider dome than that of the Hagia Sofia in Istanbul, which, if you have visited the Hagia Sophia, is astonishing. It’s also filled with intricate tiles and architecture.

One of the highlights was getting the opportunity to climb one of the four minarets that surround the  Mimar Koca Sinan mosque. The vertical climb up the ancient staircase in almost complete darkness and no room to move was a challenge, but one that was worth it in the end. 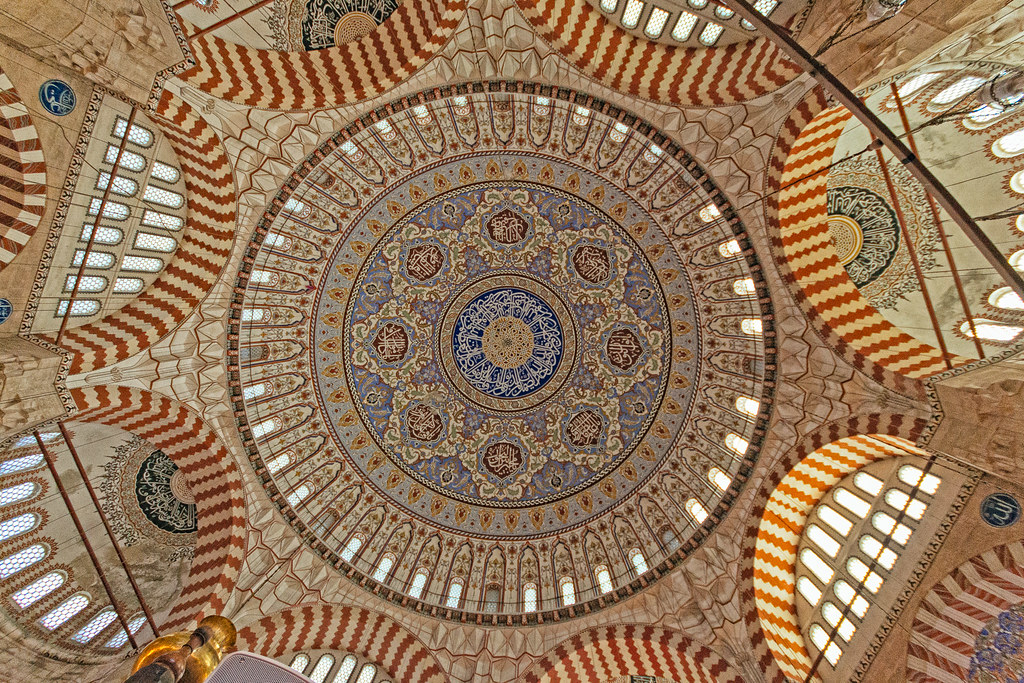 The dome of the Selimiye Mosque

I’m not much of a historian, but it was incredibly intriguing as to why a Grand Synagogue exists in a Muslim country. I listened to our tour guide and learnt, even more surprised, that the Jewish population in this area was once 20 000! And that the Grand Synagogue was built to replace the 13 synagogues that came before it, but were all destroyed in Edirne’s great fire of 1903. 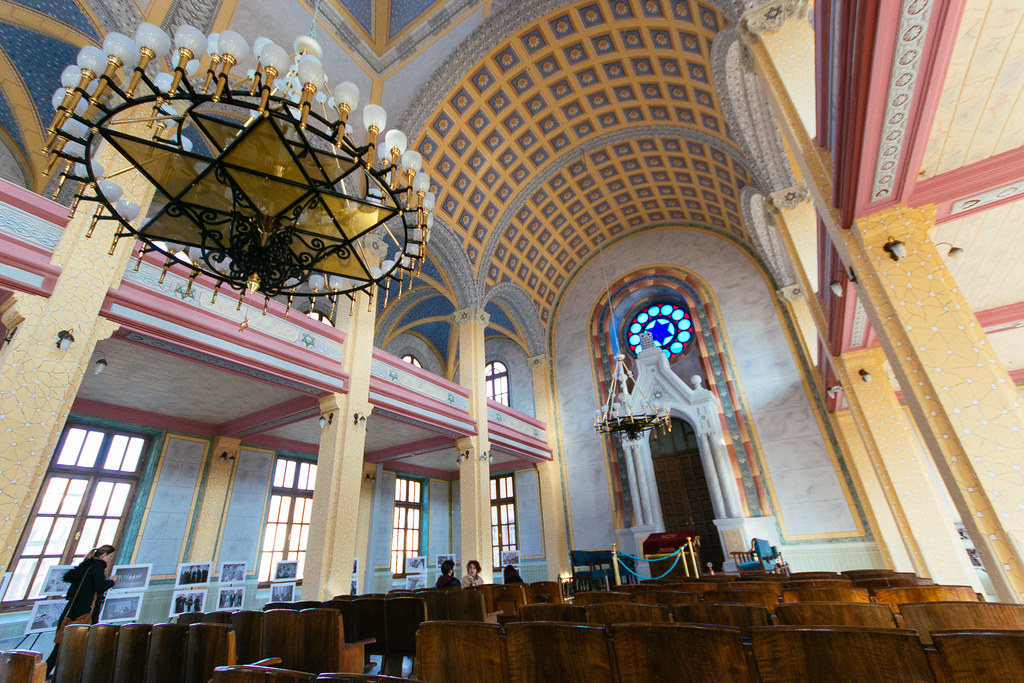 Inside the Grand Synagogue, Edirne 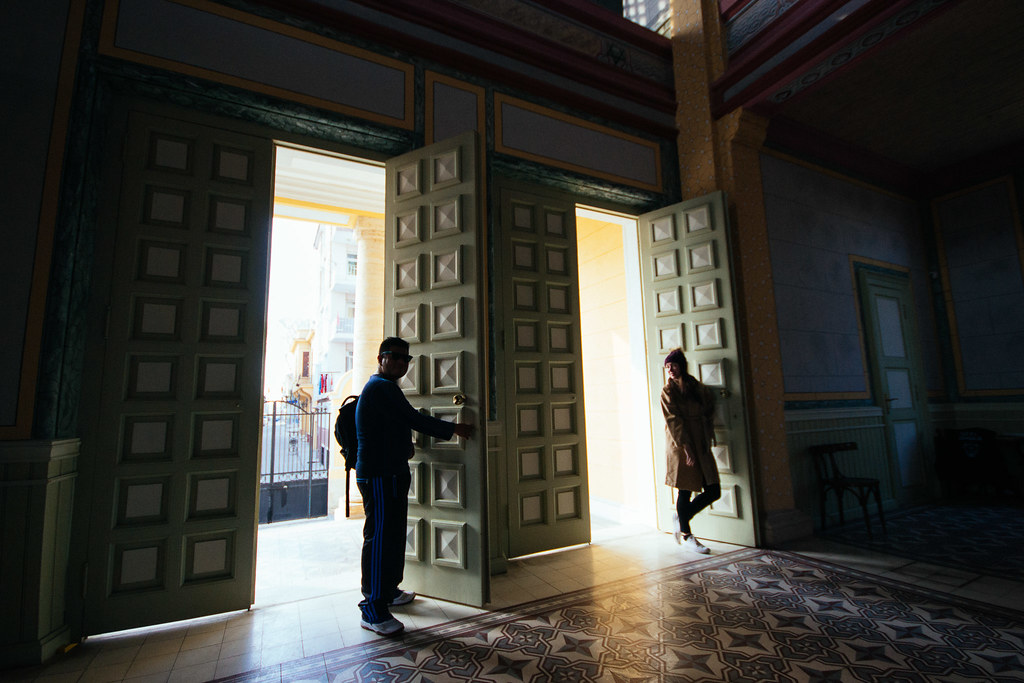 This is a fascinating place. And quite pretty too.

You enter the Museum of health and are welcomed by a large courtyard, inviting you to explore it’s premises. As far as museums go, the exterior is possibly one of the best looking I have had the opportunity to visit. Inside the madrasa there are a number of rooms to explore with detailed history about what kind of learning happened here (medical) and there are statues depicting the progressive medical techniques that were discovered and utilised here.

Some are bizarre, especially the experimental medicine section, but I guess this is how we progressed to the point at which humanity finds ourselves today. It’s quite an honour exploring places like this. 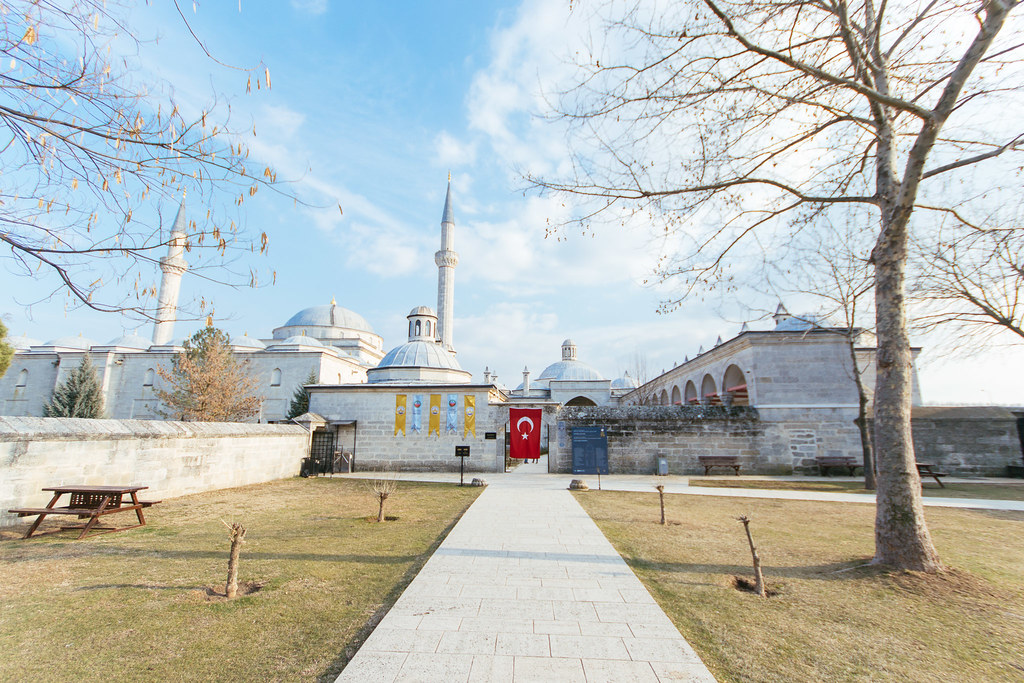 The Museum of Health, Edirne 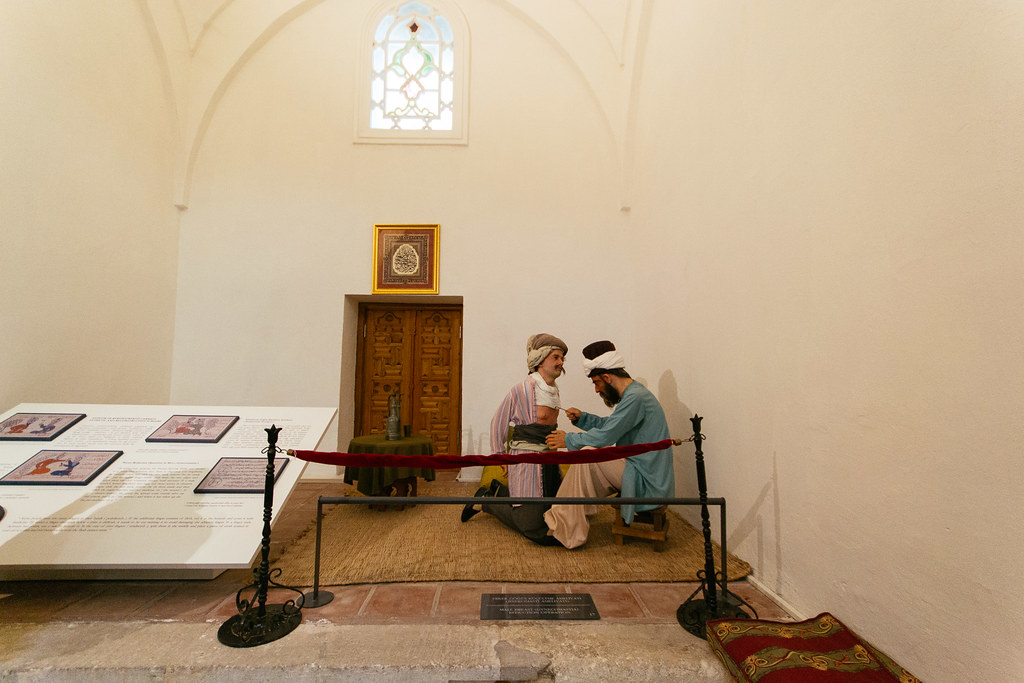 Just one of the terrifying examples of medical procedures. 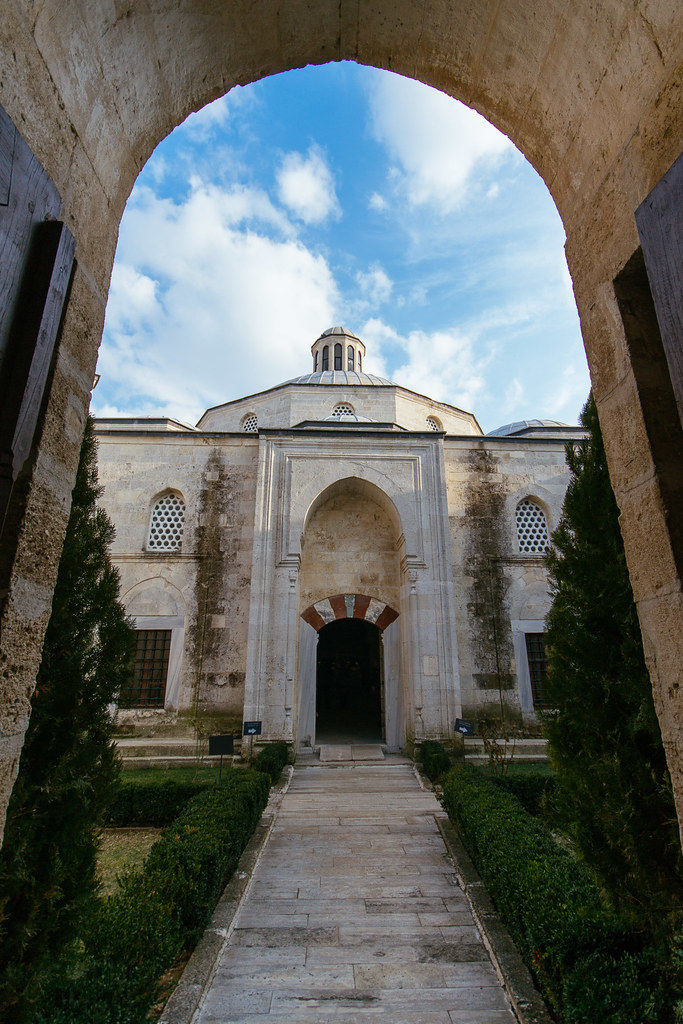 It is quite pretty.

We were then taken to the wonderful Tulipa Restaurant for lunch. Tulipa is located in Edirne, a few hundred metres from border of Greece, and is filled with beautiful private dining rooms, exquisite Turkish cuisine and local wine.

We sat and ate and laughed and enjoyed the afternoon sun for three courses of delicious turkish food in a wonderful setting. IF you find yourself in Edirne, and you enjoy good food, then the Tulipa restaurant is a must visit. 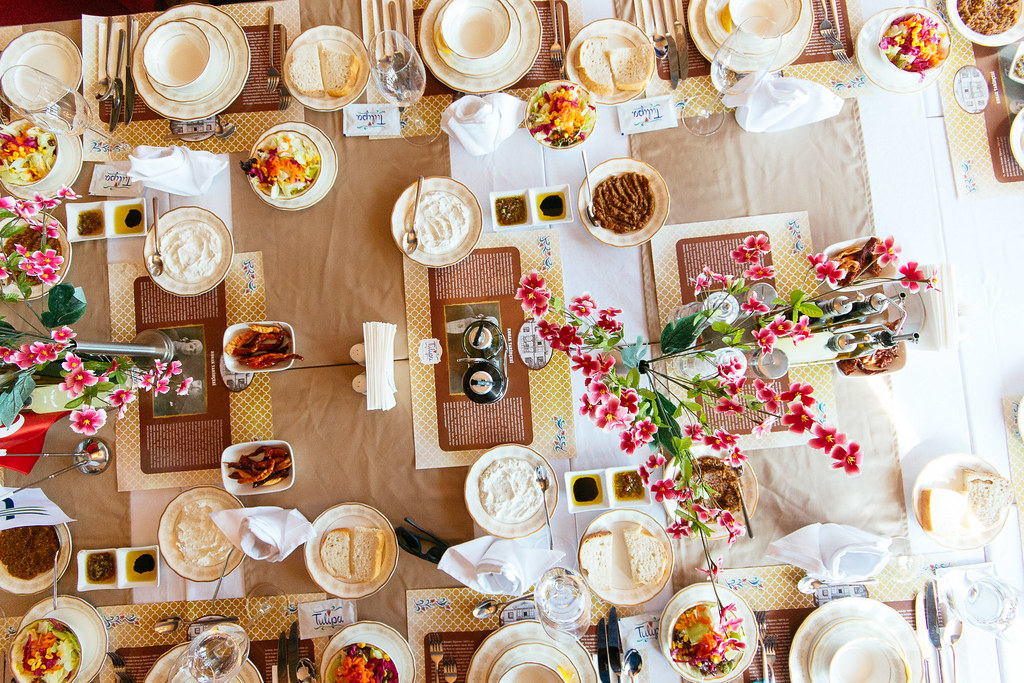 Look at this table!

We didnt actually get to go to these coffee shops that i’m about to talk about, but we drove past them and I really really wished we had another hour or two to simply walk the streets and enjoy the coffee shops and crowds that were enjoying themselves outside in the winter sun.

If you head to “Trakya Ünv. Güzel Sanatlar Fakültesi” you will head down a road filled with delightful restaurants and local coffee shops. You probably wont find anyone speaking english, but if I were driving the car, we would have spent and hour or two here easily.

Here’s a Google Map below.

However, little did I know that we were being taken from one jostling local area to another. And I got to enjoy my Turkish coffee at the end of the day (and some interesting Turkish treats which i’d never seen before.) So, there is more to Turkey than Turkish Delight and Baklava!

We explored the market and streets for a while before heading inside one of the local desert shops and made our way up to the third floor and enjoyed coffee, laughter and sweet deserts while overlooking the streets of Edirne. 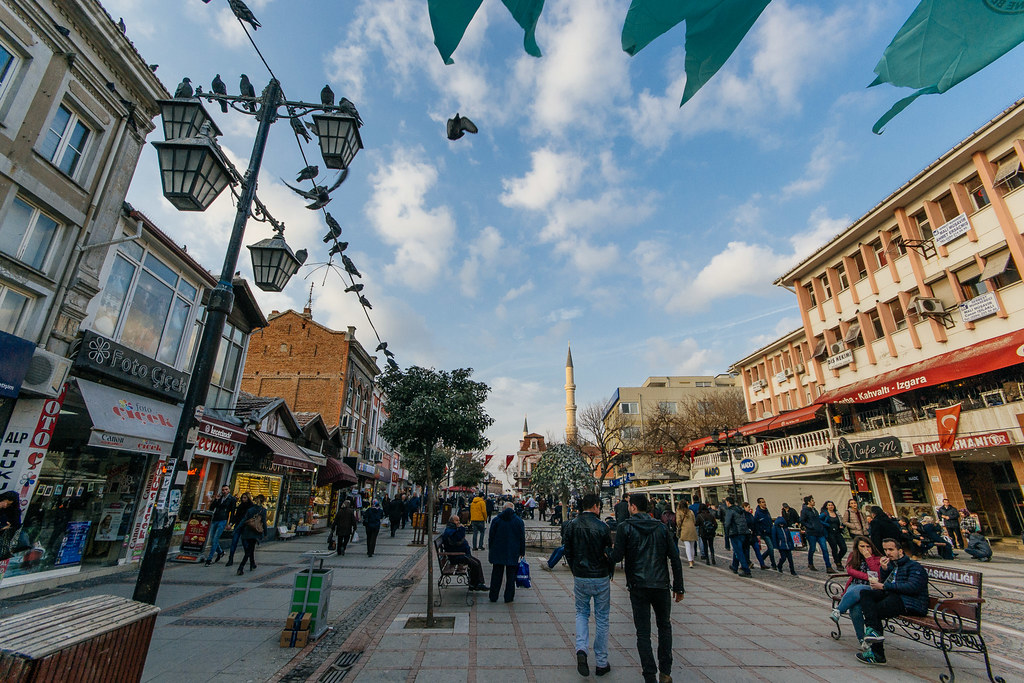 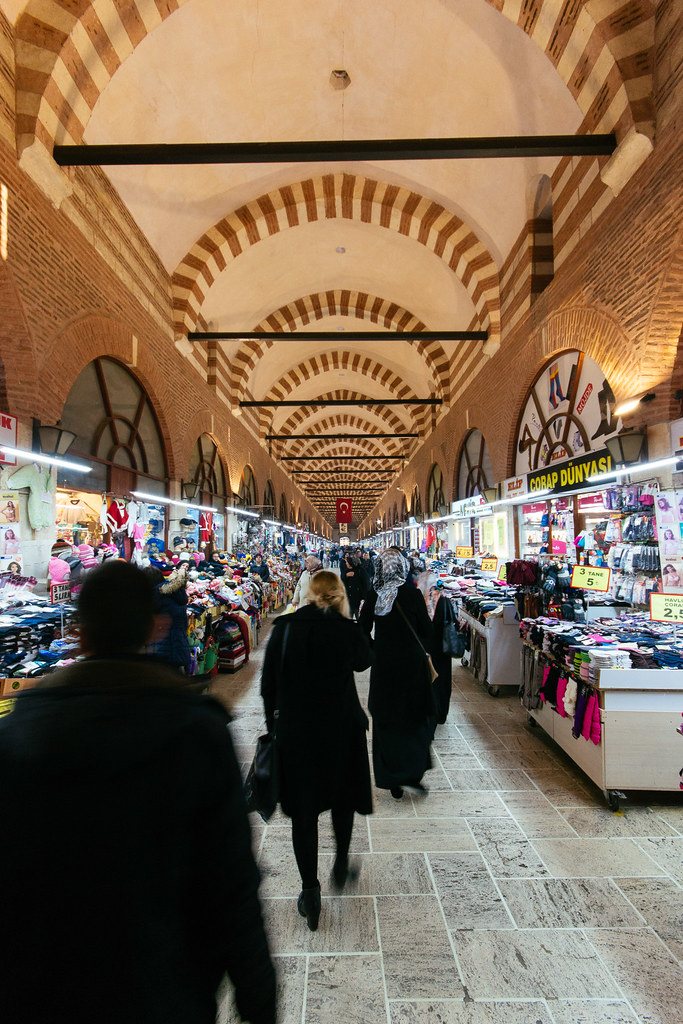 Our last and final stop was at Arcadia Vineyards, which are about an hour and a half back towards Istanbul. They’re situated almost exactly halfway between Edirne and Istanbul on the path of the Ancient Wine Road, between the villages of Çe?mekolu and Hamitabat .

We arrived late at Bakucha, our home for the night, and I managed to get in a quick shower before joining everyone for dinner in the restaurant. What I found was a very relaxed environment, with sofas and comfy chairs placed around a central wood burning fireplace. The team were already drinking their glasses of wine and relaxing before dinner. I think I was the only one that showered! 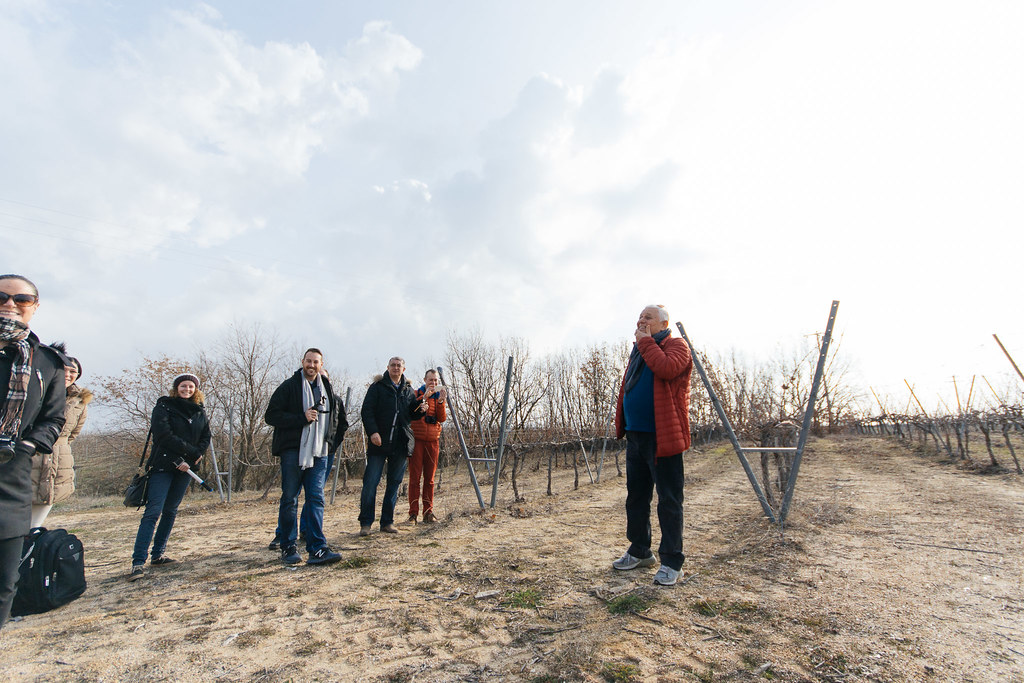 A tour and brief history of Arcadia Vineyards by the owner, who knows how to make you smile.

The next day we were taken on a tour of the vineyards and wine cellar by the vineyard and hotel owner before doing a wine tasting. It was unfortunate that it was winter, and the vineyards were all stripped of their beauty, but I learnt that growing wine in the Thrace region of Turkey actually goes back to ancient times, which again surprised me as Turkey is a Muslim country. Although it’s fairly well known as one of the more liberal or secular Muslim majority countries.

We had an incredible experience at Bakucha and Arcadia and I would have loved to spend another day there enjoying the peace of the Turkish countryside, the warm winter fires, the delicious cuisine and of course, the wine. 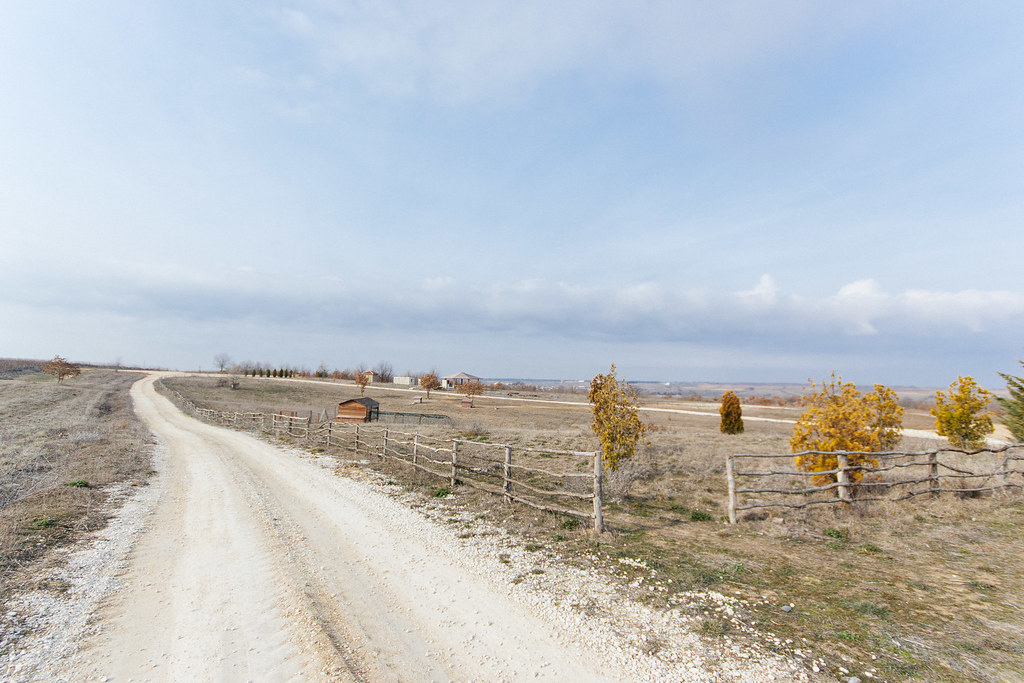 Beautiful, despite the lack of greenery. 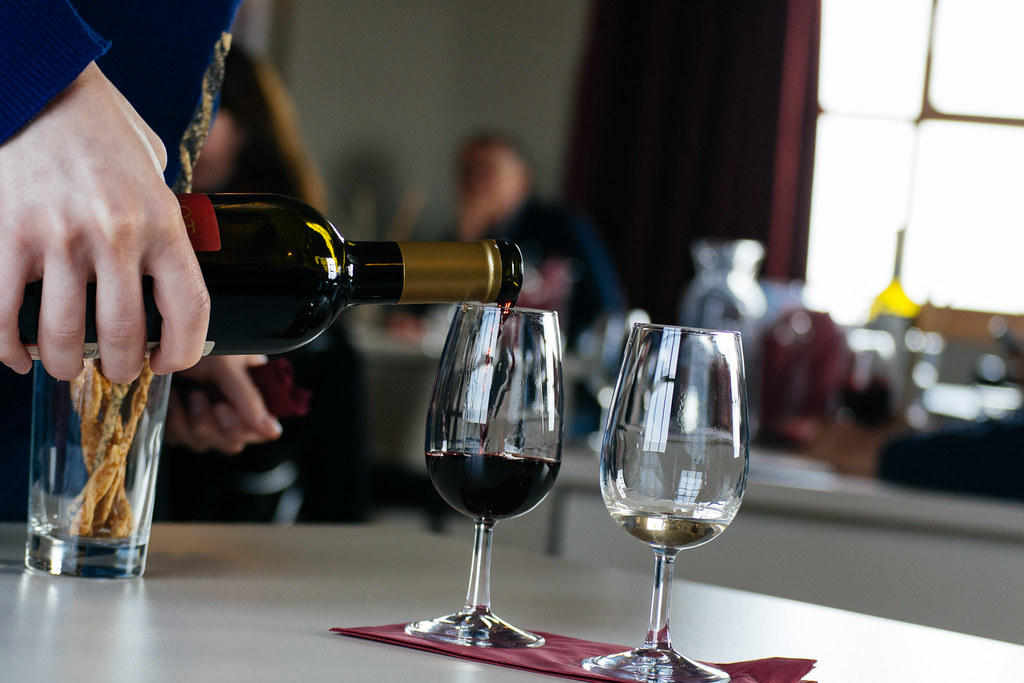 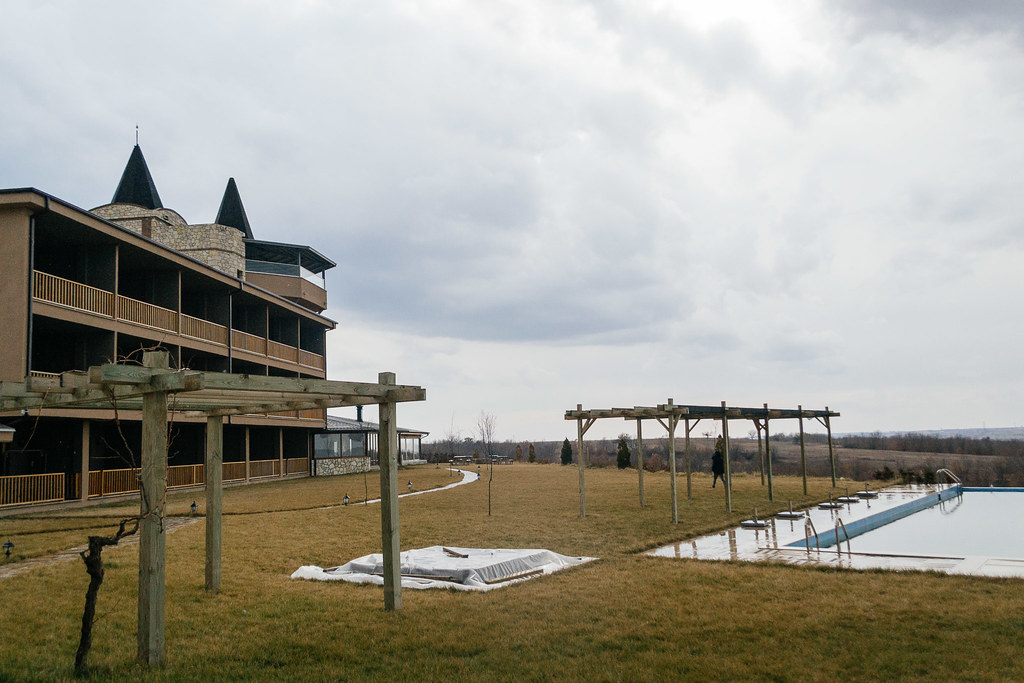 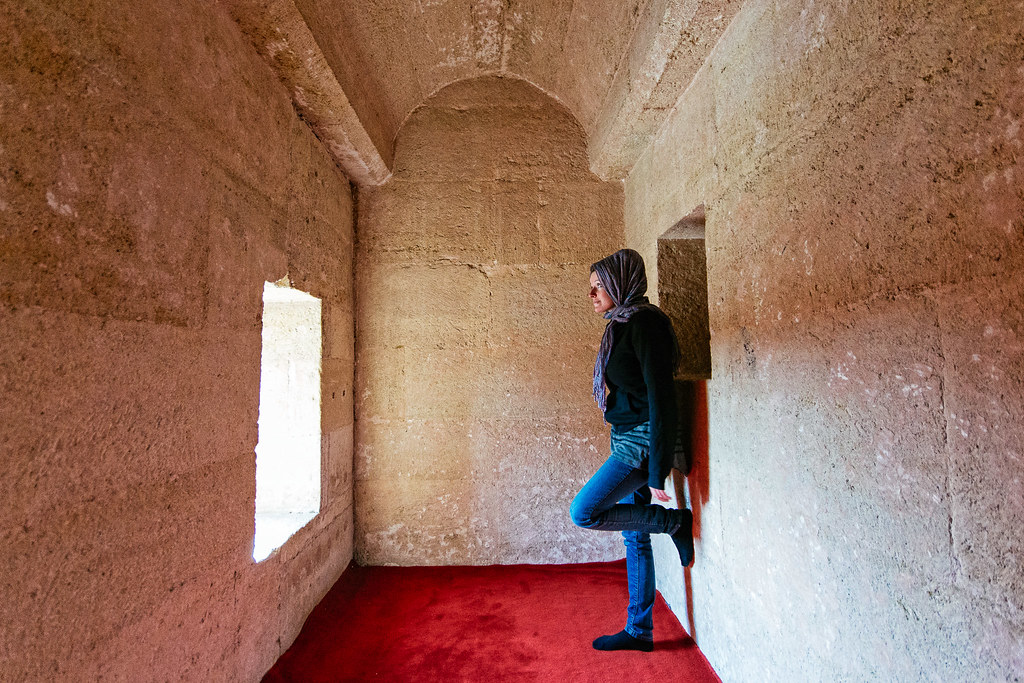 Mel, from A Boken Backpack, reflecting on Thrace.

So all in all, Thrace really surprised me. We had less than 48 hours to experience it but it was enough to make me want to go back again and that it the true test for me. Last word: Arcadia is just one of 12 vineyards in the Thrace region of Turkey and I highly recommend searching for the rest. 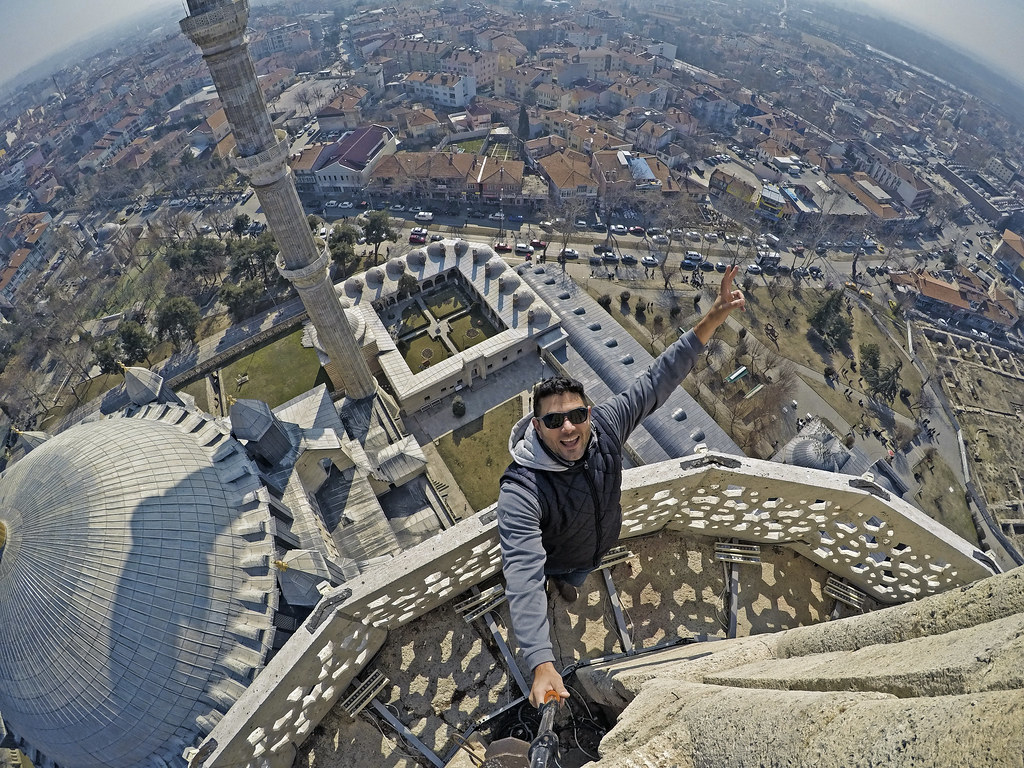 Thanks for reading and cheers from Thrace!