You are here: Home / Travel / What we love about the Waterberg, Limpopo.
195
SHARES
FacebookTwitterStumbleuponBufferPinterestPocketGoogleWhatsapp
Mail
[cs_section parallax=”false” style=”margin: 0px;padding: 45px 0px;”][cs_row inner_container=”false” marginless_columns=”false” style=”margin: 0px auto;padding: 0px;”][cs_column fade=”false” fade_animation=”in” fade_animation_offset=”45px” fade_duration=”750″ type=”1/1″ style=”padding: 0px;”][cs_text]Until I searched for Malaria-free family safaris, I had no idea that the Waterberg really existed. Quite shameful really as this region in South Africa’s Limpopo province is only three hours drive from Johannesburg and the ultimate bush escape especially with kids.

It’s quite tough to pinpoint a single thing I didn’t enjoy about this trip or our stay at Ant’s Nest so I’ll just point out that this is more of an ode to one of the best holidays we’ve had with Caleb. Could be the fact that we took my parents with as live-in babysitters or that Caleb was allowed to join us on game drives; either way three nights was really not long enough. Here’s what we loved about our stay in the Waterberg:[/cs_text][cs_text] 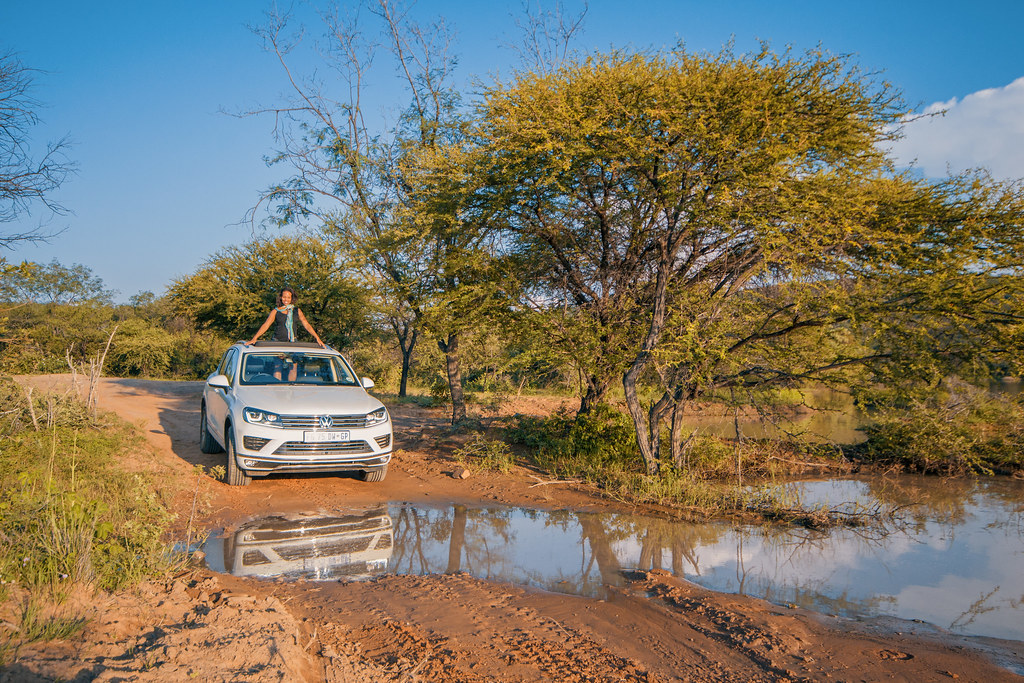 Parked beside a watering hole at Ant’s Nest.

[/cs_text][cs_text]Turns out, Ant’s Nest is known for its horse riding and safaris on horseback. Our fellow guests included families who were all experienced riders, owned their own horses in the UK and Belgium and who had kids who rode professionally. Aside from a few horse riding lessons in primary school, I had minimal experience on a horse and still had the best time. My dad, husband Vaughan and I jumped on our horses who were all great with beginner riders like ourselves and off we went into the bush.

Outside of a game vehicle on a four-legged steed, there’s nothing between you, the acacia trees and the zebra, giraffe and antelope that wonder by. Even as beginners, we took the horses ( or perhaps it was the horses who took us) up hills, beneath trees and through open bushveld to enjoy unparalleled views and close encounters with nature’s finest.
[/cs_text][cs_block_grid type=”two-up”][cs_block_grid_item title=”Block Grid Item 1″] 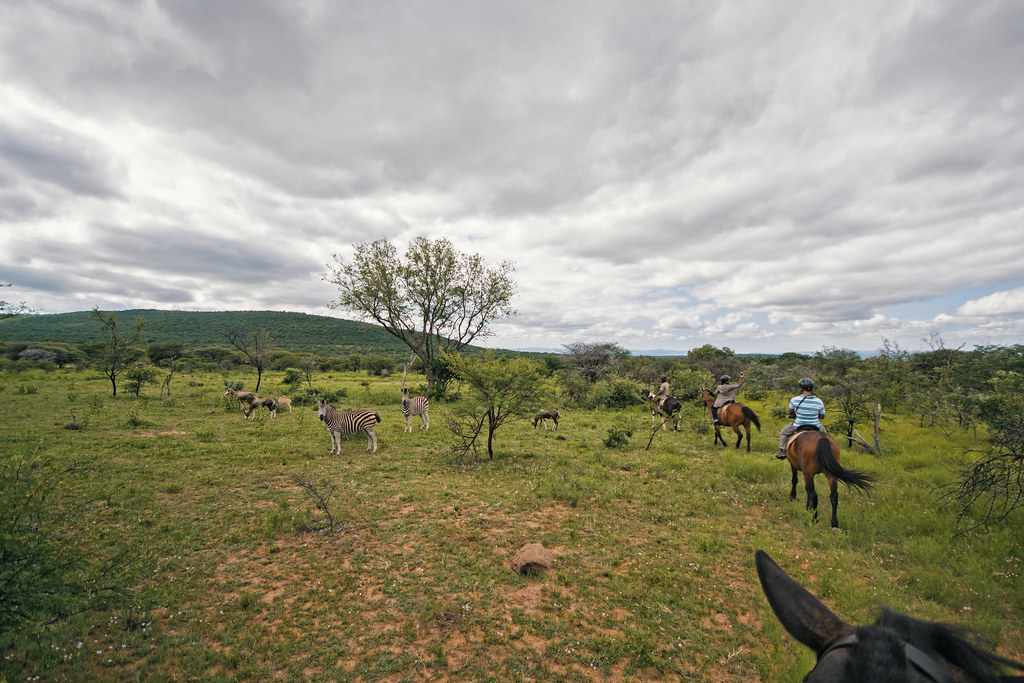 Passing Zebra and Blesbok on horseback. 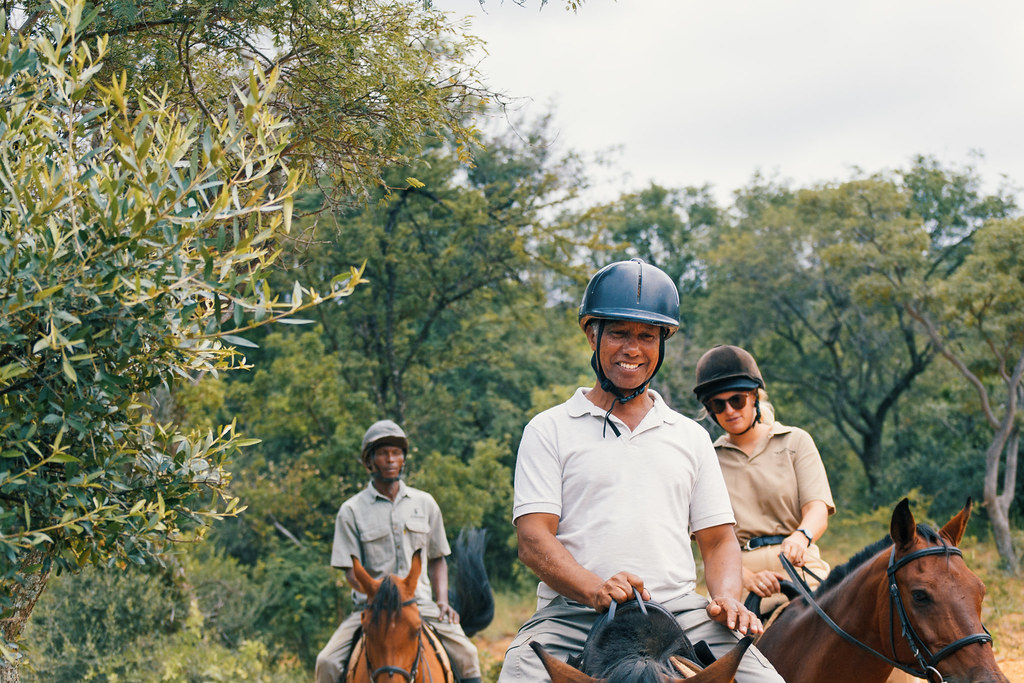 My Dad atop his beautiful steed. 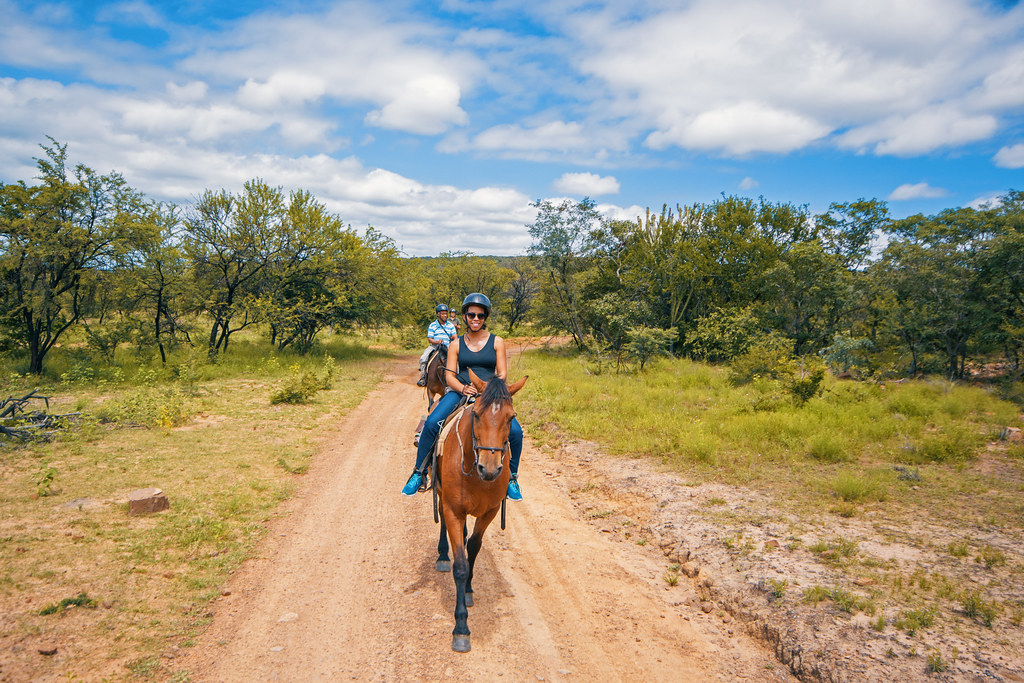 [/cs_text][cs_text]With the Big Five on neighbouring game reserve, this reserve is free to explore with your kids in the game vehicle. Sitting inside vehicles with names such as ‘rattle snake’ and ‘mamba’ we ventured out with Caleb( 15 months at the time) and enjoyed seeing the wild through his excited eyes. Most game reserves don’t permit kids below 4/5 years old on game drives, but here we were able to enjoy it as a family and watch Caleb shriek with delight at each zebra, wildebeest and giraffe sighting.

We especially enjoyed out game drive with the enthusiastic guide, Seqwiri Langa with his frequent chuckles and questions, which really made for fun and insightful experiences as we got out of the vehicle to touch and look at various types of trees, termite mounds and bugs.[/cs_text][cs_block_grid type=”two-up”][cs_block_grid_item title=”Block Grid Item 1″] 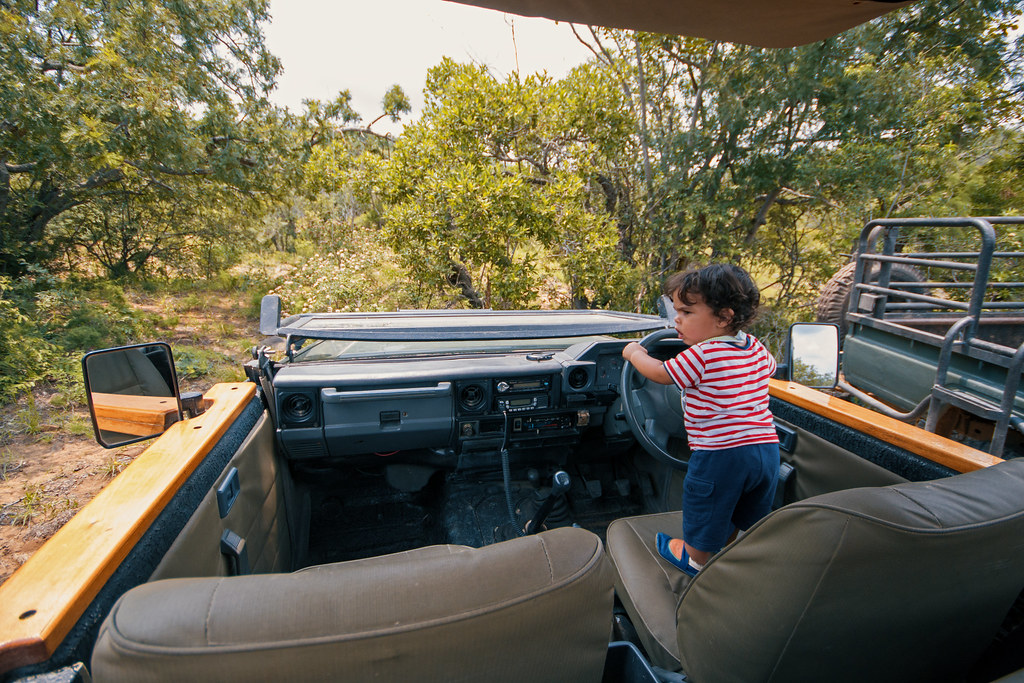 Caleb keen to take the wheel at only 16 months. 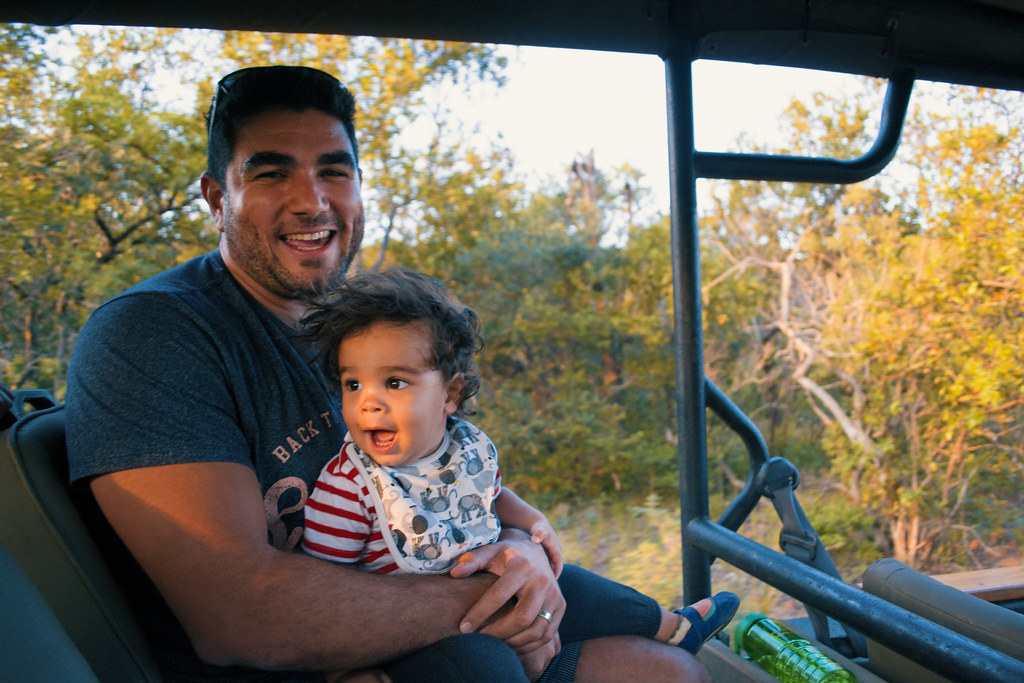 Caleb’s palpable excitement each time he saw an animal. 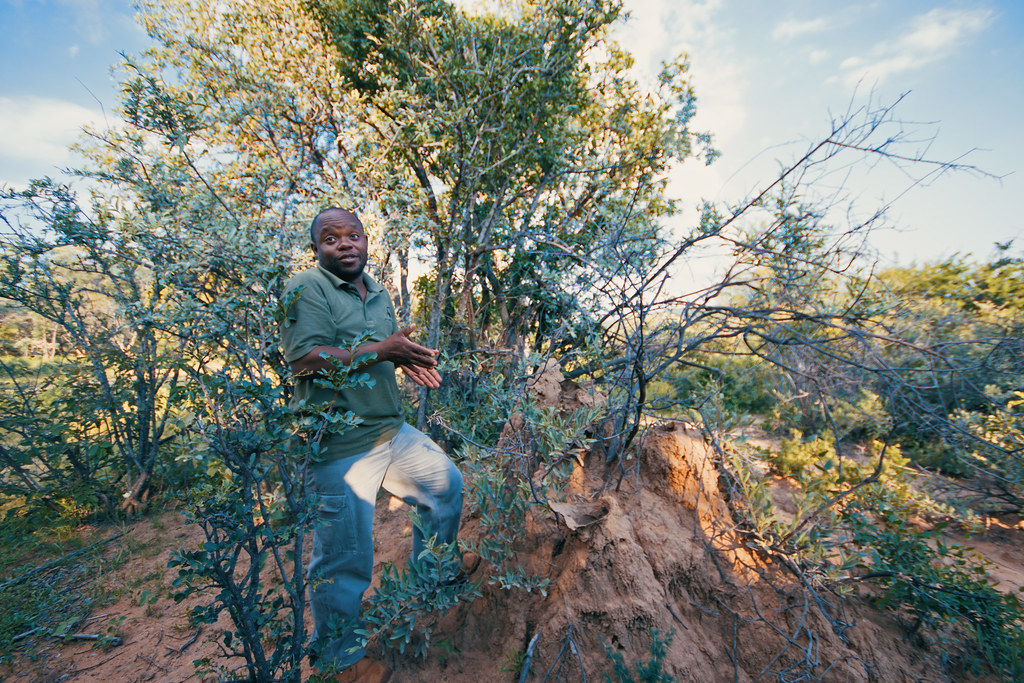 Our Guide, Sekwiri Langa explaining the life of termites.

[/cs_text][cs_text]Even though my parents came along with us, Vaughan and I never imagined that we’d get to have a private dinner beneath the bush sky as most dinners at the lodge are communal and very interactive. We’ve learnt that it never hurts to ask and luckily we did because one evening whilst Caleb stayed with his grandparents, we were led though a stone passage of lanterns to a private dinner table beside a majestic Euphobia tree and a roaring fire. Sans our child, we sipped champagne, dined on impala steak and relaxed beneath a myriad of stars on a fire-side couch.
[/cs_text][cs_text] 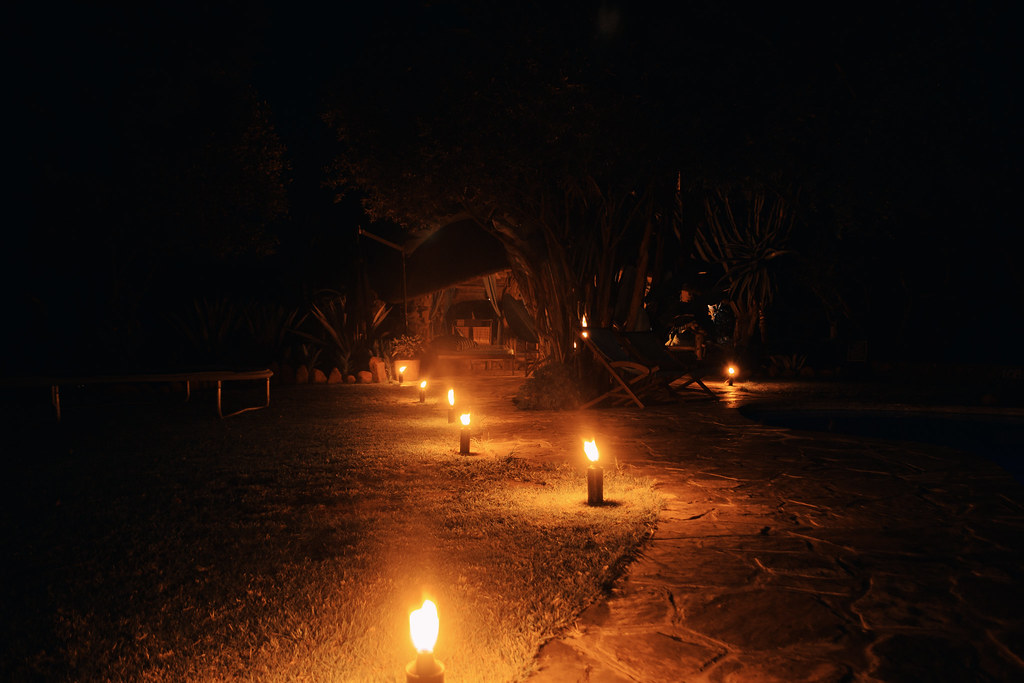 Lights leading the way to dinner beneath the stars.

[/cs_text][cs_text]Aside from going on horse rides, these beautiful beasts were never far away. We’d hear them galloping in the darkness as we had dinner and watched them walk past the lodge walls. One afternoon I’ll never forget, we went on a short self-drive to a nearby watering hole only to be onlookers of horses bathing and playing in the water as the sun cast its last light over the bushveld.[/cs_text][cs_text] 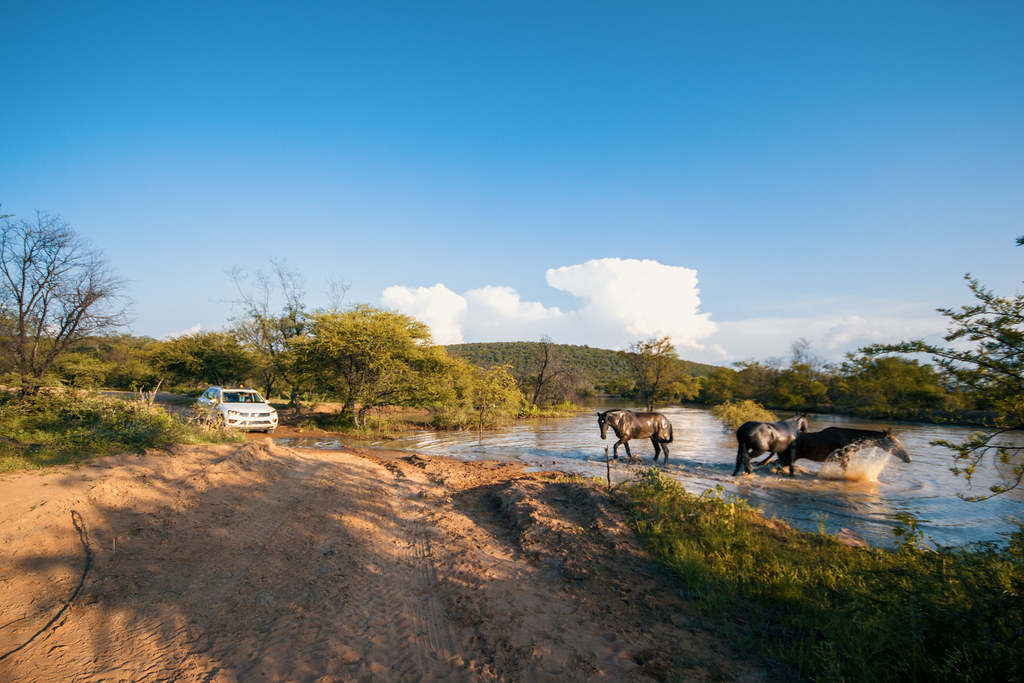 Pretty much the time of sunset, one can only dream about. 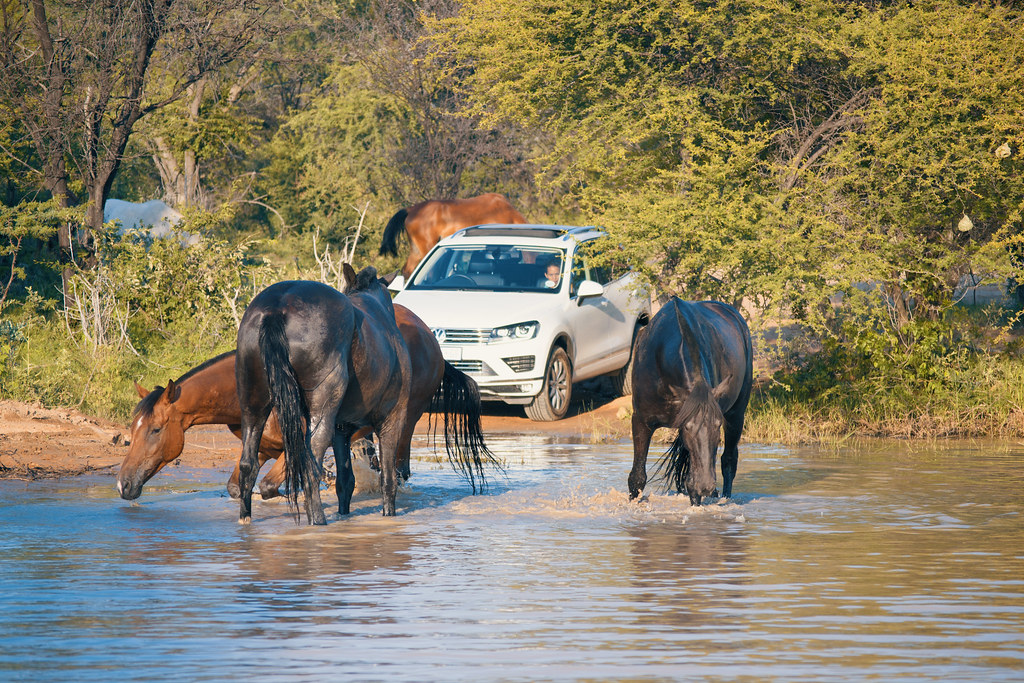 Catching the horses at last light. 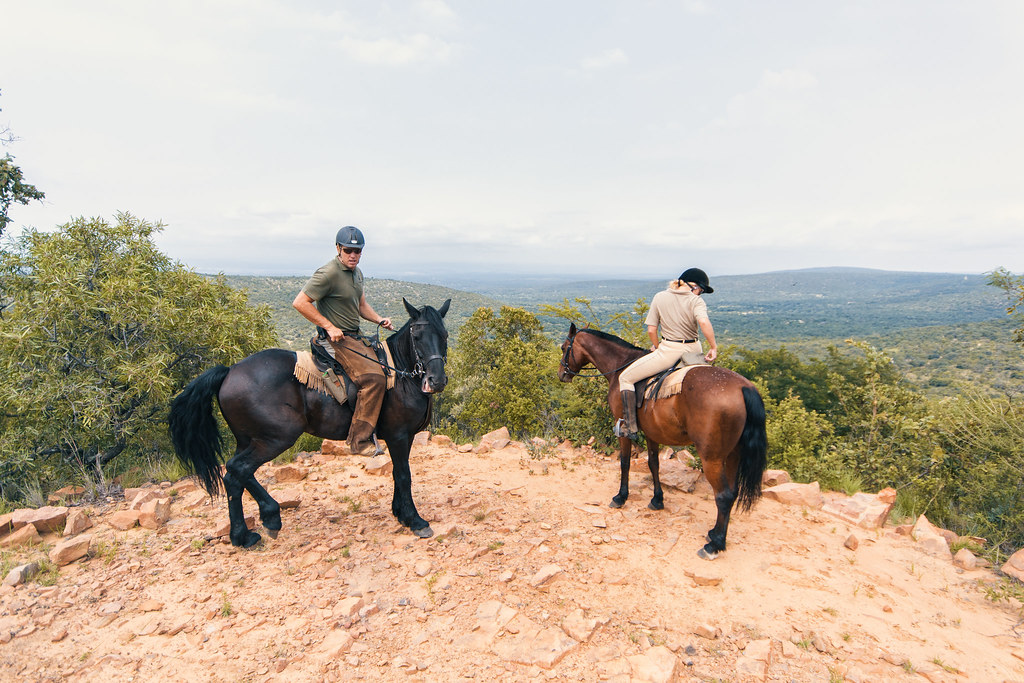 These animals provide so much of the reserve’s allure.

[/cs_text][cs_text]And by sundowners, I don’t mean the drinks served although G&T’s in the bush always have a certain extra tastiness to them. Each evening we were treated to a new sundowner spot, each with their own magic. One evening we were driven up a very rocky hill to the place where owner Ant Baber proposed to his wife, Tessa Baber.

And it was here that we could let our eyes rest on the giant red globe that fast retreated from the land, leaving the Waterberg in a fiery sunset hues. The second night we had drinks at Ant and Tess’s house on a deck beneath an acacia, overlooking their rhinos eating lucerne and marvelling at a 4 month old rhino feeding from her mom.[/cs_text][cs_text] 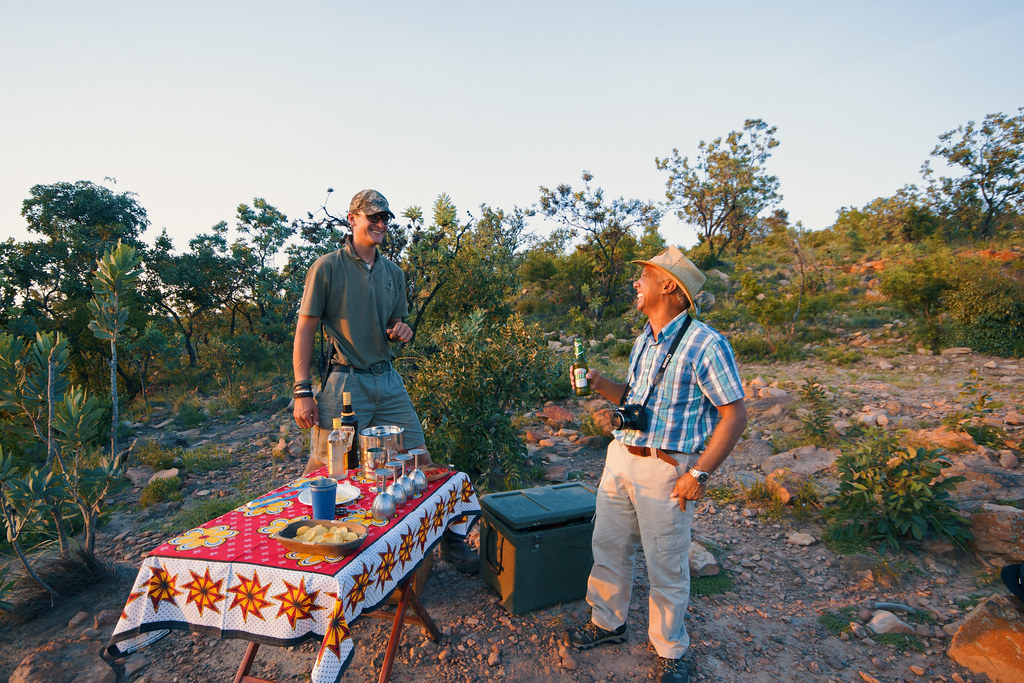 Drinks atop a hill 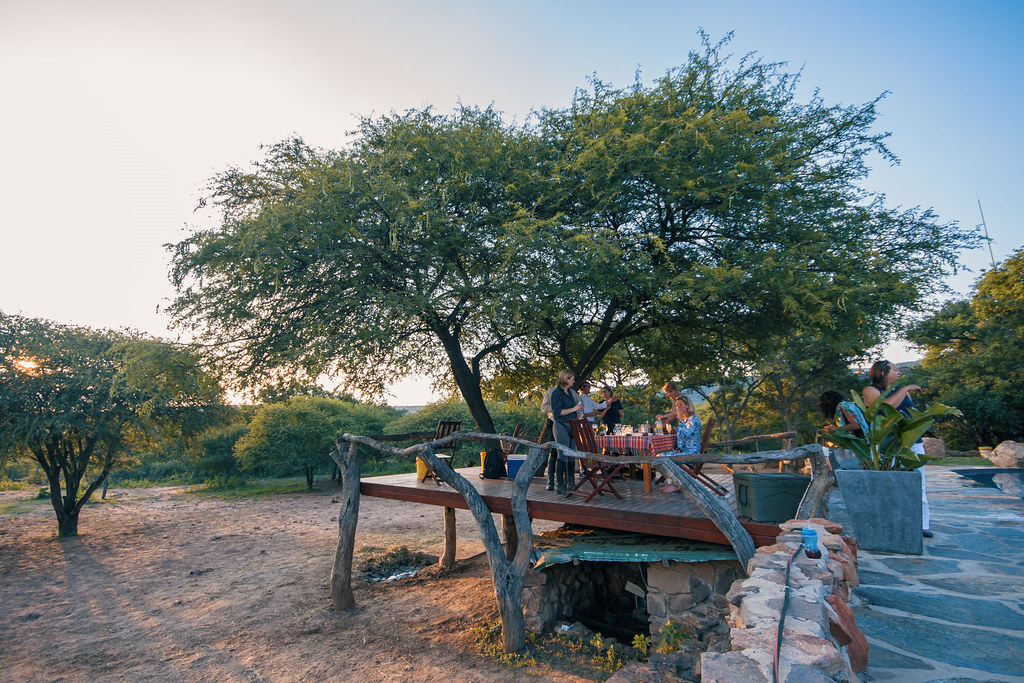 Sundowners at Tess and Ant’s House. 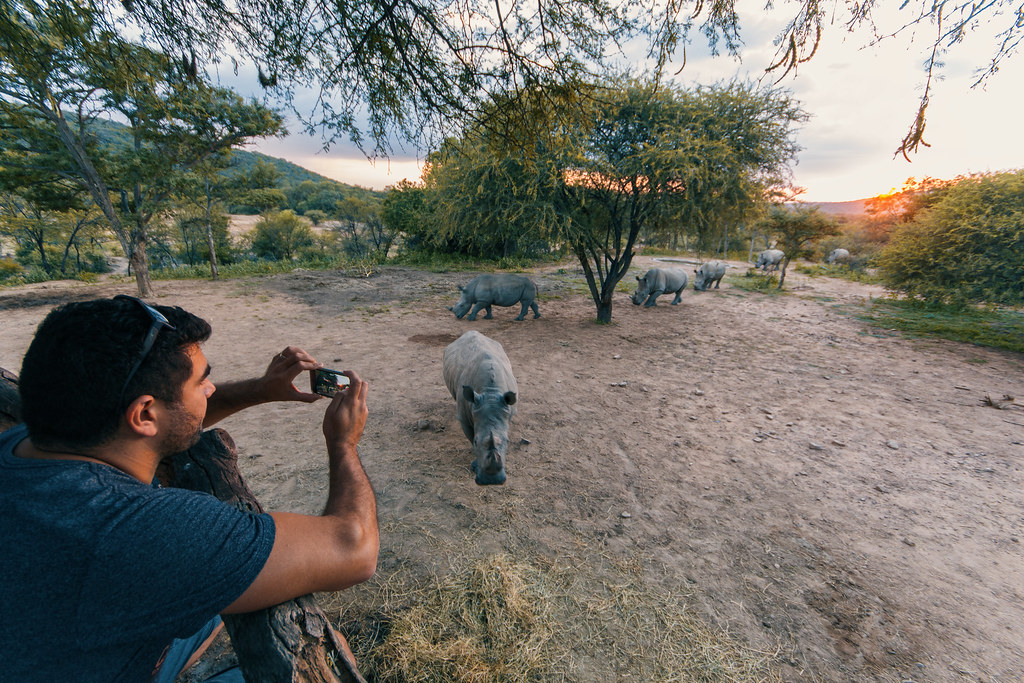 Rhinos, sunset and sundowners beneath an acacia.

6. Save the Waterberg Rhino Campaign.

[/cs_text][cs_text]After admitting that a baby elephant’s bum is quite possibly the best bum you’ll lay eyes on in the wild, I feel like a rhino is a close second. Sadly in 2015, one rhino was being poached every 6-8 hours leaving the birthing rate lower than the poaching rate. It was also recorded in 2015 that only 18000 white rhino remain making them endangered, with only 6000 Black rhino left. After three of their own rhinos were poached in 2012, Tess and Ant decided to join efforts with the waterberg community to take control and save their rhinos.

With no support from the government, all funding is private and goes towards security equipment, bullet-proof vests and self-defence courses for rangers as well as educating kids in the region. The lodge have taken a unique approach and have their horns infused with ectoparasites and an indelible dye which devalues the horn and renders it useless for ornamental or medicinal use.

Ectoparasites are toxic to humans so if the rhino horn is ingested for medicinal purposes it will make the consumer very sick. Because they feed their rhinos daily to keep track of them, we were able to see them up close and really marvel at their pre-historic beauty.[/cs_text][cs_text]To find out more about how you can assist and donate towards the campaign visit waterbergrhino.com[/cs_text][cs_text] 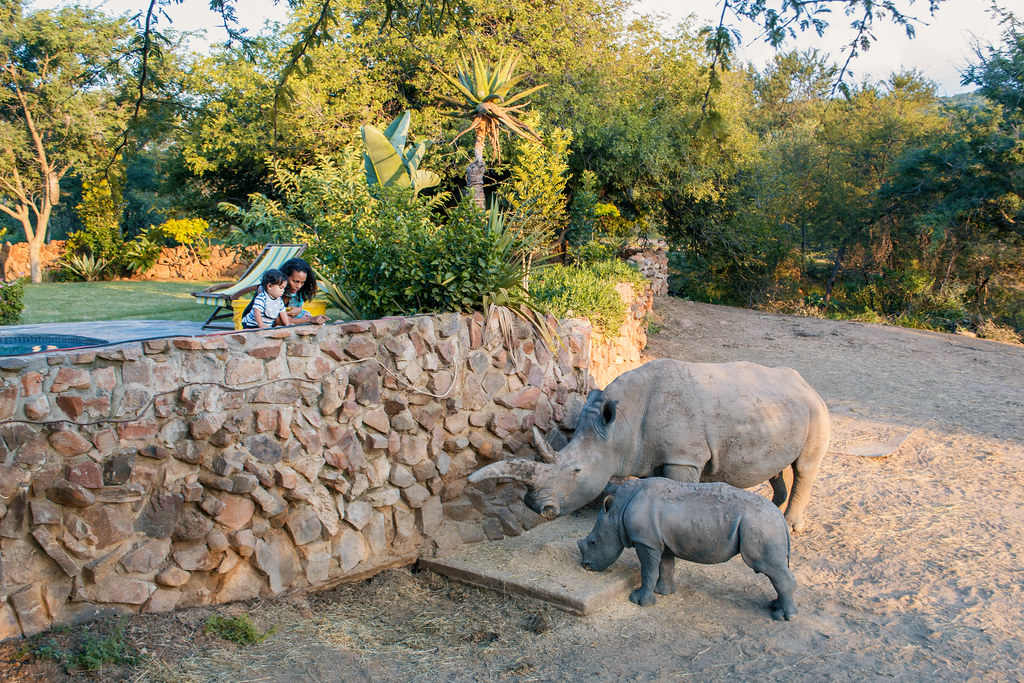 Meeting the mama and baby rhino of the reserve. 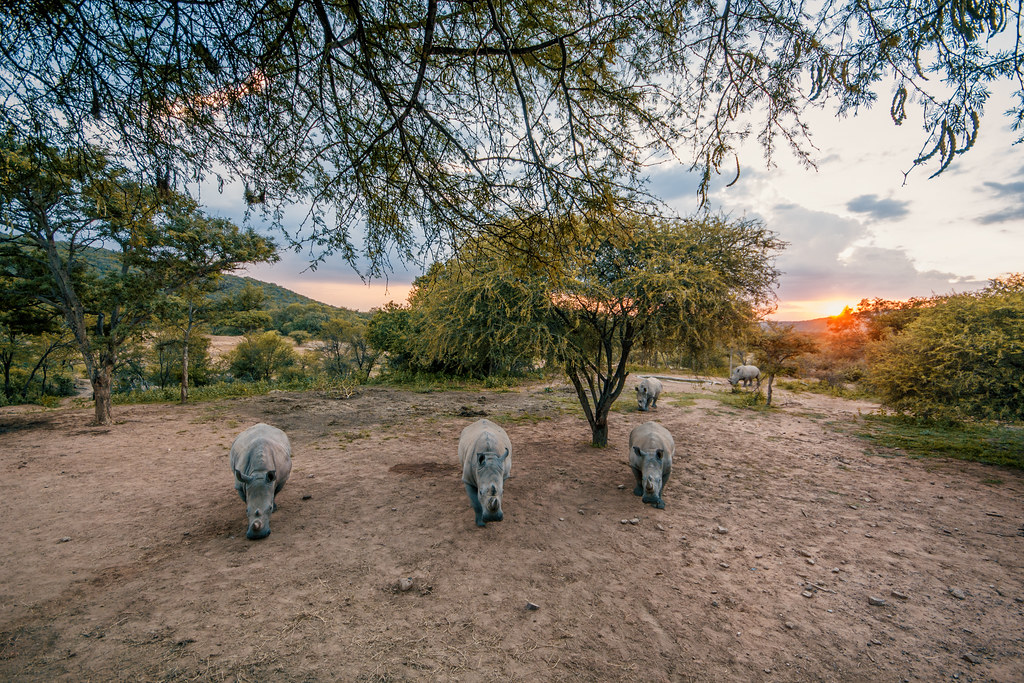 These rhinos are fed daily to keep track of their numbers.

[/cs_text][cs_text]We were blown away by the sweeping views over the gorge and the romantic nature of Ant’s hill which is best suited for romantic getaways for couples. The family-friendly lodge of Ant’s Nest is really no less chic with its poster bed, thatched roof and spa baths. Staying in the Sable Suite with Caleb and my parents really proved ideal as we had a really large bedroom and bathroom plus a massive lounge and dining area for him to enjoy during the day and for us whilst he slept.

Our favourite part of the suite must be the spacious balcony with a couch curving around the edge for us to relax in between activities and in the evenings. As we’ve realised having ample leisure space to enjoy while your child sleeps is paramount to you enjoying your trip as parents. 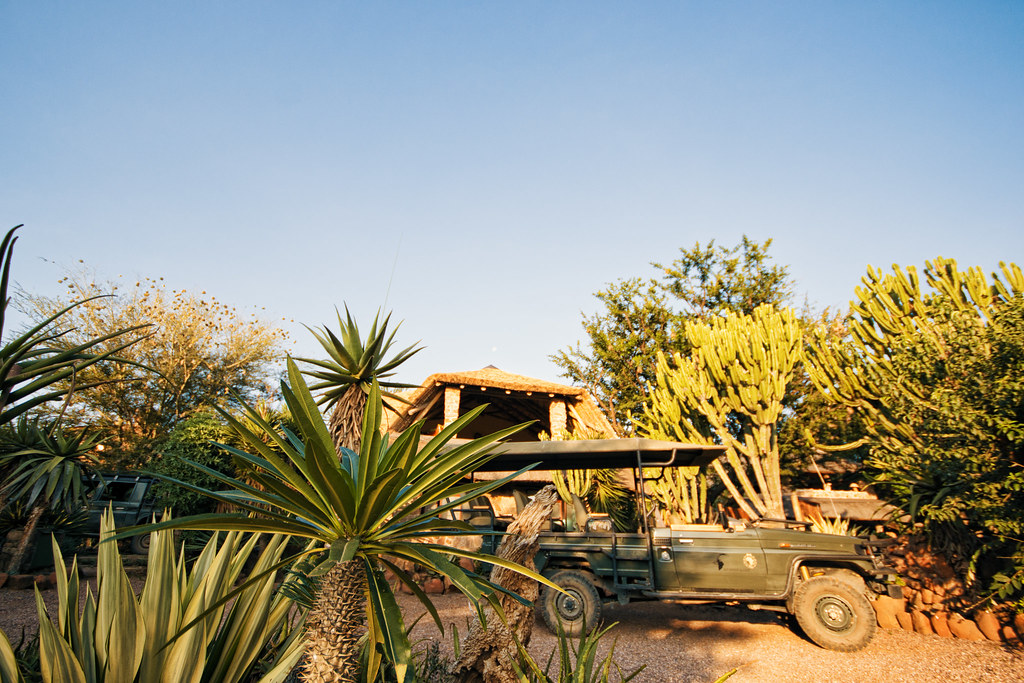 Golden Hour this side of the bush. 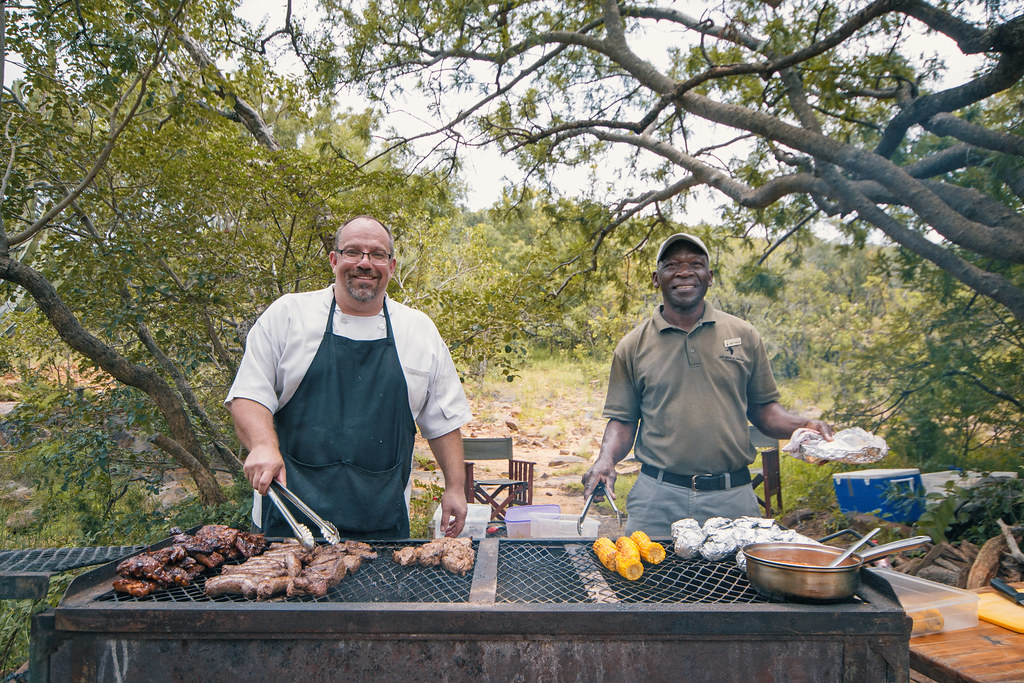 Food and people were some of the highlights of this reserve. Here we braai outdoors with Matthew and Kobie. 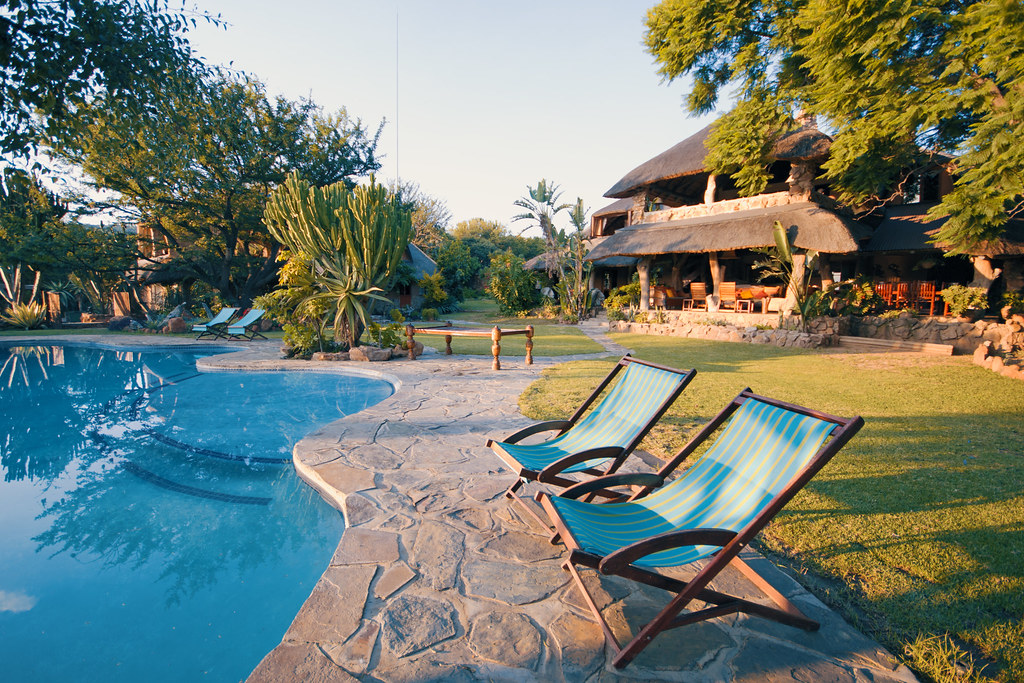 The spectacular Sable Suite ( our home for three nights) at Ant’s Nest.

[/cs_text][cs_text]Being in such close proximity to zebra, blesbok, blue wildebeest, rhinos and horses is such a magical experience. To be able to see these creatures in their natural habitat and watch as they go about their day is a true privilege. It is our dream that every South African could get to do this at least once in their lifetime as its bound to leave anyone and everyone unchanged. [/cs_text][cs_text] 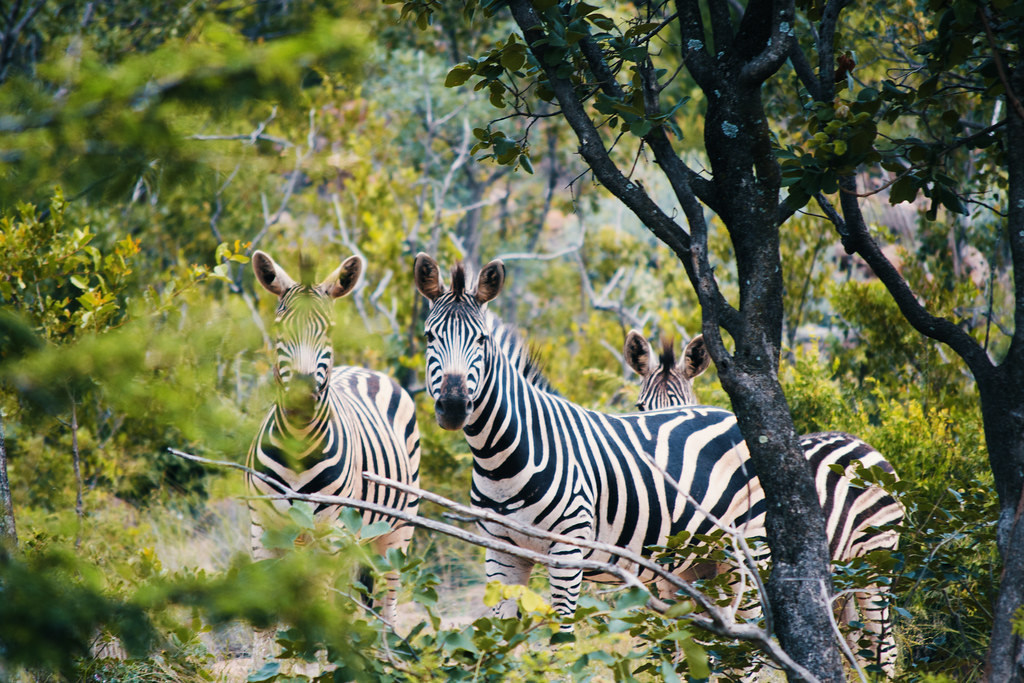 How did the zebra get its stripes? 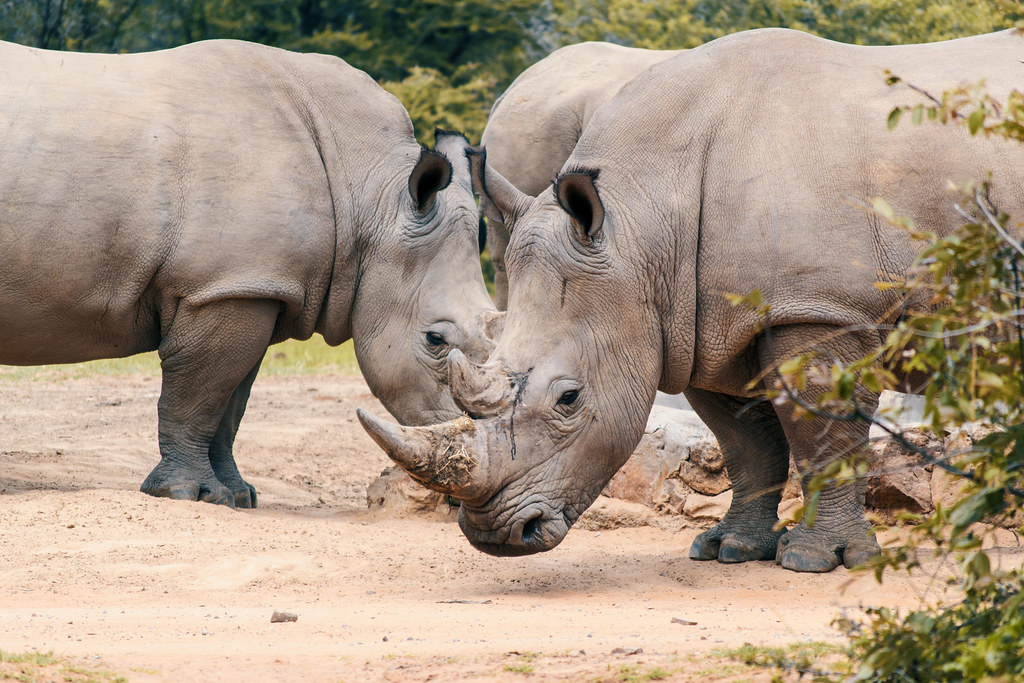 We love Ant’s Nest’s tactic to inject the horns with dye-infused poison to deter poachers. 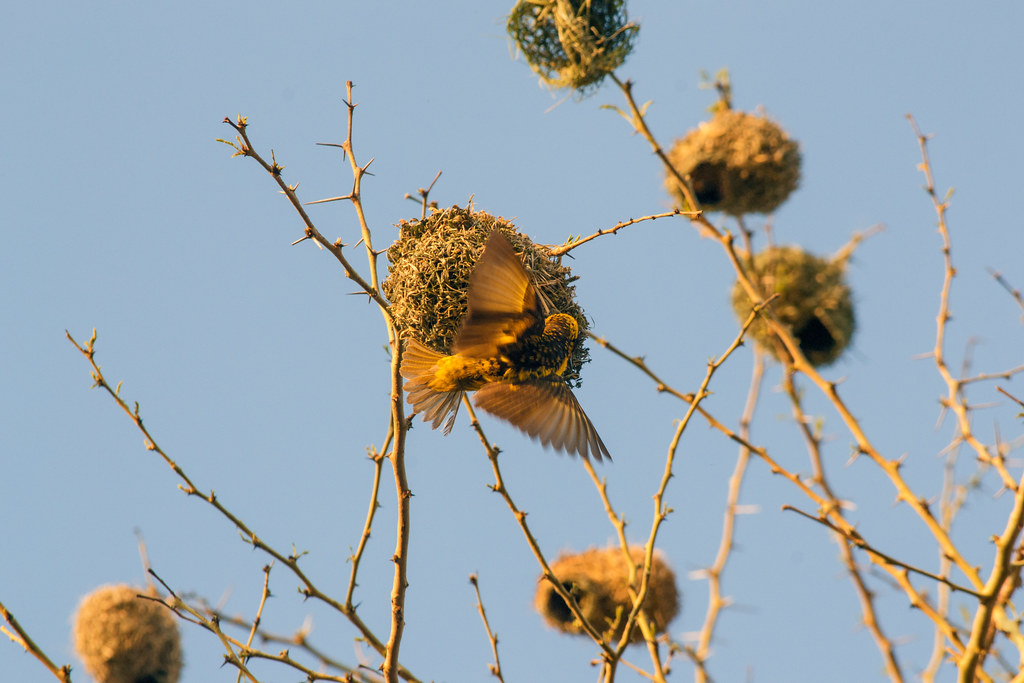 Weavers making the sweetest of sounds whilst visiting their nests.

[/cs_text][cs_text]Thank you to Volkswagen South Africa for getting us to the Waterberg in the strong and sexy Touareg. Ample space for grandparents, toddler and all our luggage plus great for those out of the city roads.[/cs_text][cs_text] 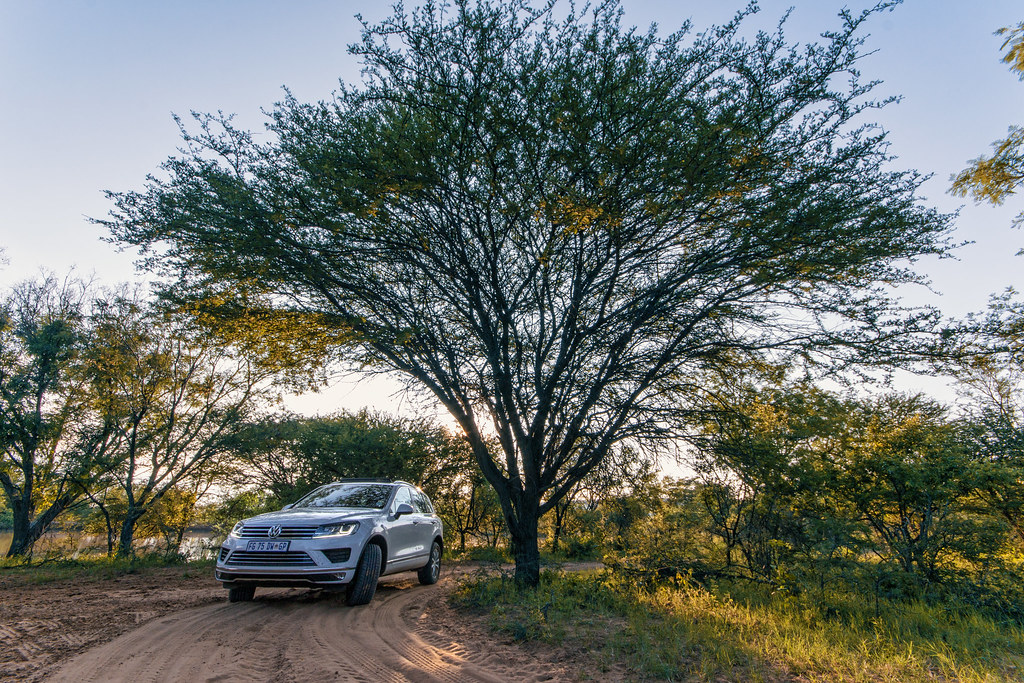 The Touareg looking good and getting us into the rural Waterberg in style. 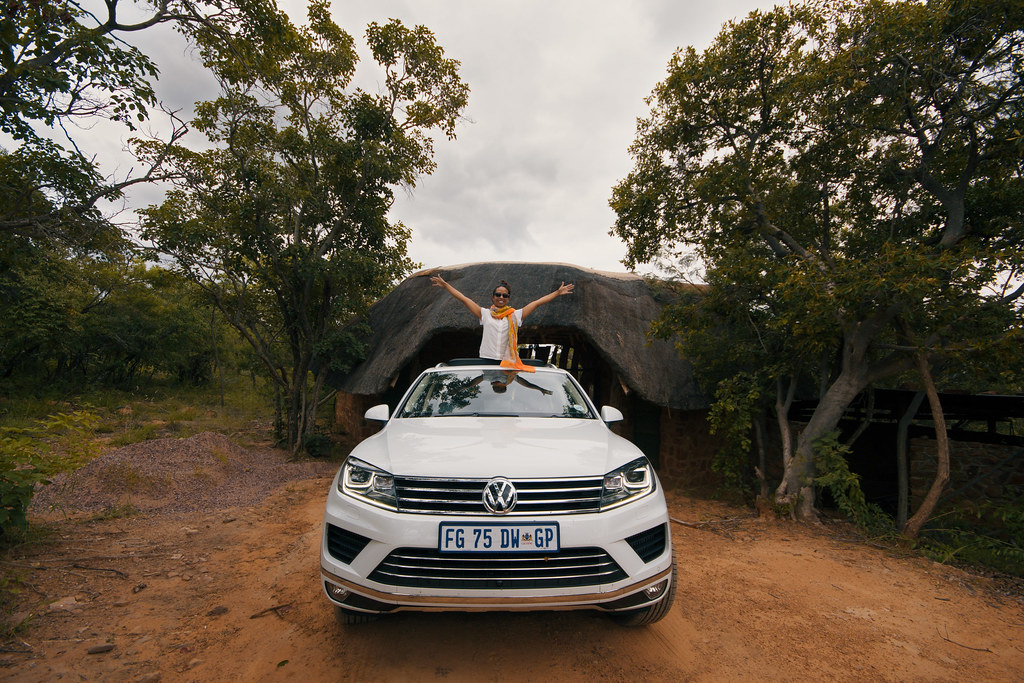 Arriving at Ant’s Nest in this sexy beast.

[/cs_text][cs_text]To watch my Insert on The Expresso Morning Show on SABC 3 when I walk about the Waterberg, click play below.[/cs_text][x_video_embed no_container=”false” type=”16:9″][/x_video_embed][/cs_column][/cs_row][/cs_section]