Whilst Samui is dotted with luxury resorts, yachts moored along the coast, restaurants that seem to cater for millionaires alone and shopping districts that will leave your card steaming, there are so many things you can do on the island for free or at least as far your scooter will take you. As I don’t benefit from the wondrous pound, euro or dollar exchange rate, I have found some spectacular natural sights to see, food you have to try and markets to explore on a shoestring budget.

Being an island with an uninhabitable mountainous interior and tropical rainfall, many waterfalls abound here. Two waterfalls I really loved were the two Na Muang waterfalls. The drive 15km south of Nathon will take you along Samui’s ring road through spindly palm trees, acres of lush green vegetation and actual tarred road.

Na Muang waterfall one is accessible from the main road and you can park a minute away from it for 20 baht. Once you’ve walked past the stalls of Thai souvenirs, you’ll hear the unmistakable sound of rushing water. Walk down the rocky steps and behold an 18m high rock face with cool mountain water gushing over it and into a large pool at the bottom. This is probably the coldest water you’ll find to swim in on Koh Samui, but just swim slowly into the centre as there are many rocks just below the surface. 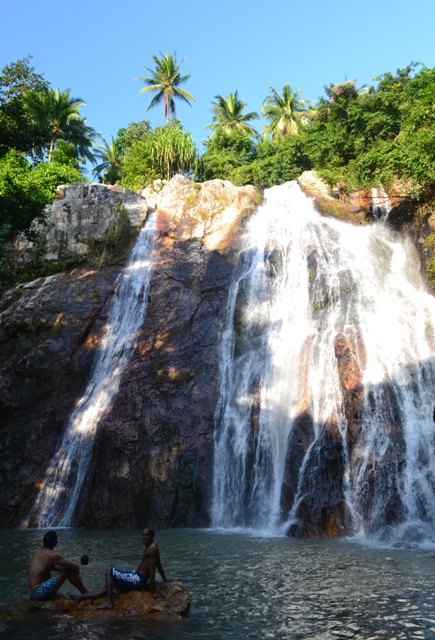 Nothing like a swim in the cool pool of Na Muang waterfall one.

Na Muang waterfall two is the mother of all waterfalls and is 80 m high. You may have guessed that you’ll have to hike up to catch a glimpse of its beauty. There’s an entire Safari park and petting zoo at the bottom, but if you’re keen to save money and not engage with animals that way, keep walking upward. You can pay 100 baht for the safari vehicle to take you closer, but you will still have to hike most of the way. It’s a good 20 minute hike so wear better shoes than slip slops (I didn’t and slipped quite a bit) and go when its slightly cooler in the morning. You’ll walk across its lower pools via a wooden hanging bridge and have to clutch onto rope along the trail at times but once you reach the top, you can enjoy a view down over the valley and a tier of the waterfall crashing below. Take a dip in its cool waters, swing from a tree above the pool and take in the majesty of its powerful beauty. 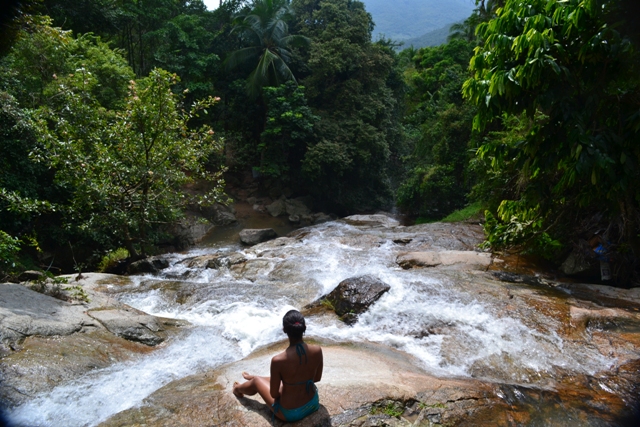 Try as I might, I could not find real coffee beans or espresso on the island until I wondered down the road going towards the sea from Soi 4 in Maenam. This unassuming little café with its old postcards, colourful chalkboard and photo memorabilia of past patrons had a worldly look about it and my hopes soared at the prospect of a true cappuccino. It was only when I sat down at the wooden table beneath an umbrella and took in the aroma of pure coffee beasn that I knew I’d found my new favourite coffee shop. They import coffee beans from all around the globe and serve sublime mochas, cappuccinos, lattes for less than 60 baht. (Starbucks on the island charges over 100 baht for a coffee). Their breakfasts and pancakes make the perfect pairing for your java. 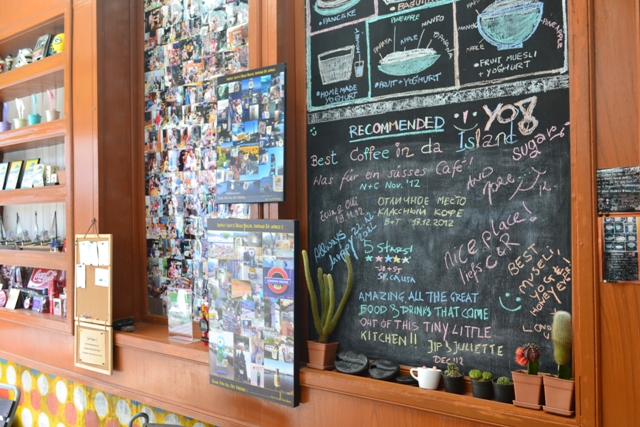 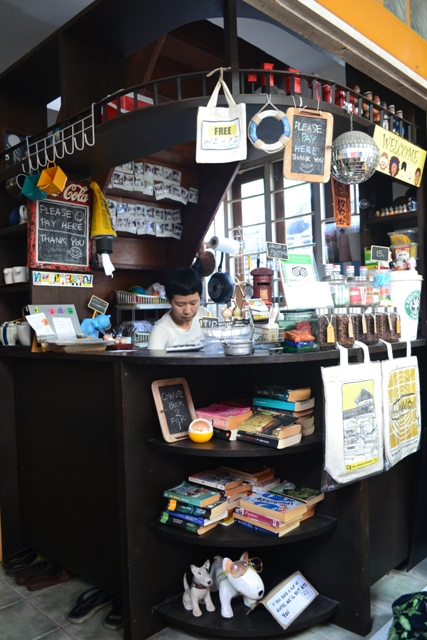 The quirky About Cafe coffee shop.

The night market is located in the same road as ‘About Café’ opposite Maenam’s Soi 4 every Thursday evening. Food, clothing and souvenir vendors sell their wares and the market winds around into two streets. The sounds of a live band resound through speakers and you’ll find delicious food here at great prices. Spicy grilled sausages, fired pork, chicken samoosas, sugar cane and seafood abound in this market. You’ll find rice cakes, cheap pad Thai, fruit smoothies, pizza slices and banana rice wrapped in banana leaves for under 100 baht each. Aside from grabbing a cheap dinner, there’ll be clothing, lockets, headphones, jade jewellery and crafted soaps for you to feast your eyes on. 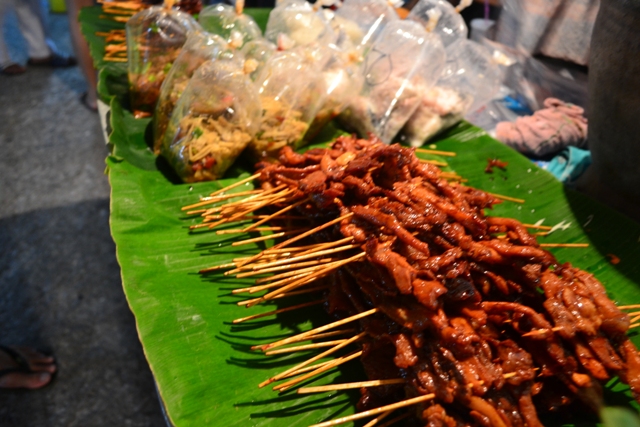 Every kind of food you can imagine is sold at the Maenam night market. 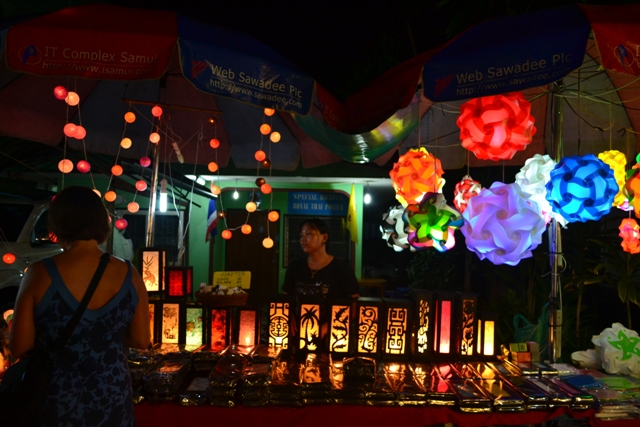 A stall of lights at the Maenam market. 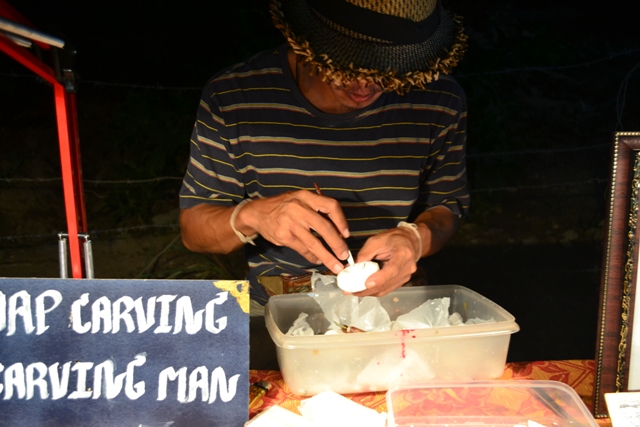 The art of carving delicate flowers out of soap is very popular trade in Thailand.

This is one beach front restaurant that won’t charge you the earth. They are very new, but their owners are great guys who take an interest in each of their guests and understand just how important impeccable customer service is from the get go. Whilst your lunch is being cooked or your cocktail mixed, grab a lounging chair down on the beach and go for a swim in this calm turquoise bay. True to its name, blue lights emanate from used vodka bottles hanging on the wall and the deep house tunes get a bit louder as night falls. On Thursday and Friday nights you may catch a live band there together with a fireworks display on the beach. 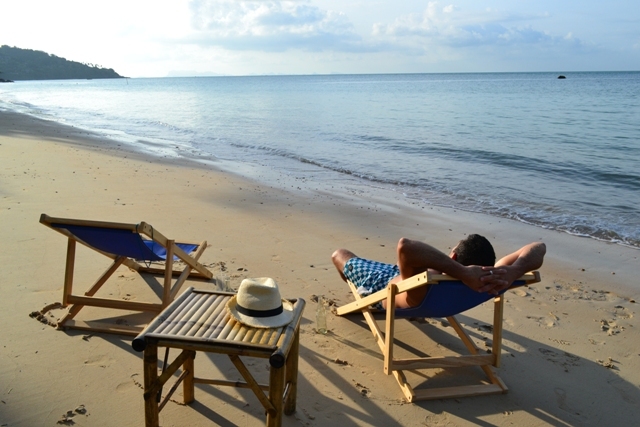 Laem Yai beach in front of the Blue Marlin.

Owner, Pikun and her husband wield magic into their little Corner Restaurant at the intersection just before the road in Nathon becomes a one way. Once we tasted her Pad Thai and Panang, everything else paled in comparison. Her Pad Thai is only 60 baht and the mango sticky rice is half the price of that found in Chaweng’s busy district with double the flavour. I’m yet to taste anything on the menu that is not delicious or not made with superb quality meat. If you stay long enough she will chat to you about their adored King, the ingredients for her dishes and the basics of speaking Thai. 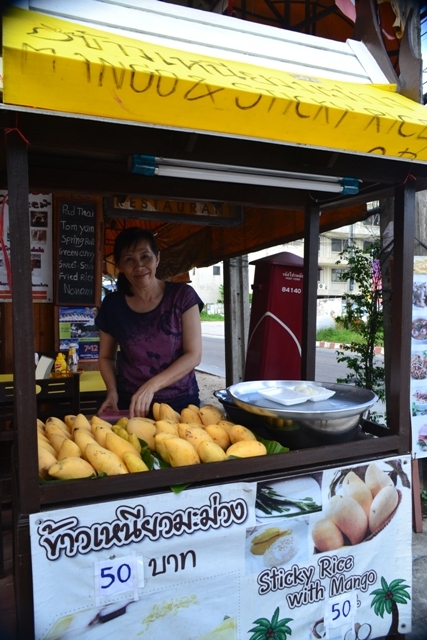 6. Coconut ice-cream at the view point over Chaweng.

Between Lamai beach and Chaweng Noi, stop off at the view point. Whilst there are a few stalls selling coconut ice-cream around Samui, you won’t find a better view to go along with it than here. Three scoops of coconut ice-cream served in a half a coconut with slithers of it in between will only set you back 50 baht. Take in the vast ocean below or walk the path down to the rocks below where you can feel the breeze in your hair and wish that your ice-cream would last forever. 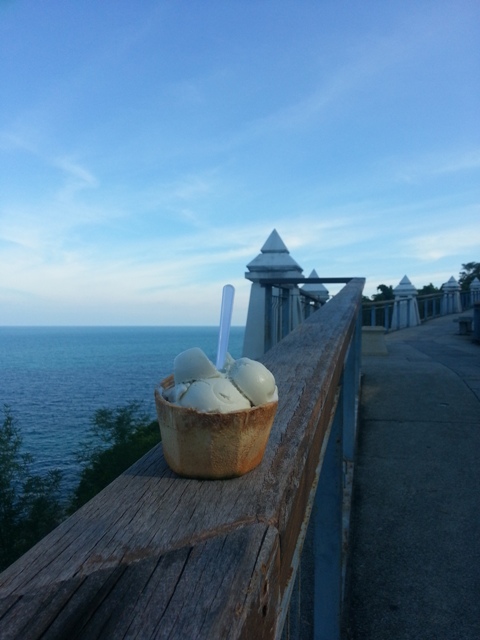 Coconut ice-cream at this scenic viewpoint.

7. Use the songthaew to get around the island.

There are no tuk tuks on the island so if you want to avoid the hefty taxi fare and don’t have a scooter, flag down a songthaew (red van with a canopy and benched seats) anywhere on the island. It’s the only form of public transport and trips cost around 50 baht which you can pay the driver upon arrival. When I first hopped on a songthaew, I figured shouting for the driver to stop was the only way he would know where I needed to get off, thankfully a local pointed to the bell on the roof which I needed to press and I saved myself the embarrassment. At night, the songthaews work as private taxis so best negotiate the fee before you leave.

8. Adventure over Samui’s highest peak on a scooter.

When we read that the route over the mountain from Maenam 5 to Lamai was for 4×4’s, we scoffed and took our scooters instead. But once we passed the viewpoint closest to Maenam, we realised they weren’t lying. If the impossibly steep gradients were not daunting enough, the orange dirt road had crevices so deep you and your scooter could disappear in them. I would not suggest tackling this as a nervous or beginner rider as we’ve heard of many accidents over this route involving falangs (foreigners). Luckily for me, my husband has no fear and an experience of dealing with a bike whose brakes occasionally fail, so I knew we would make it through to the other side alive. Aside from two safari vehicles, an off road motorbike and a few locals, we totally disappeared from civilisation for awhile. We were rewarded with sweeping views over the island all the way down to the ocean, canopies of coconut trees covering the hills and steep drops on either side of the road with some of the richest tropical vegetation I’ve ever seen. We also passed the impressive big Buddha and the sleeping Buddha on the highest peaks. So hire a scooter for 200 baht a day and fill up your tank for only 100 baht (lasts about 110 km) and head inland, as this is a ride you don’t want to miss. 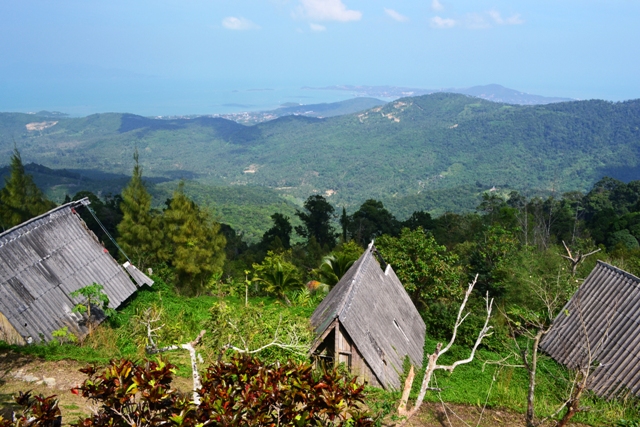 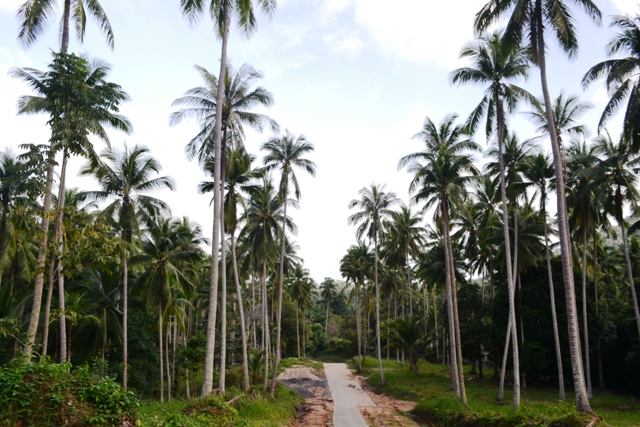 A forest of palm trees. 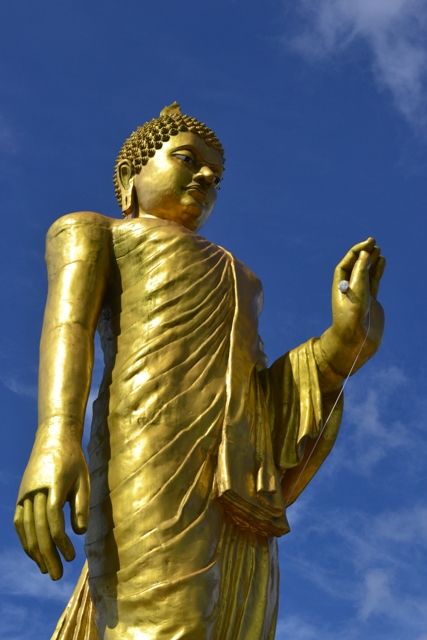 Big Buddha atop a hill. 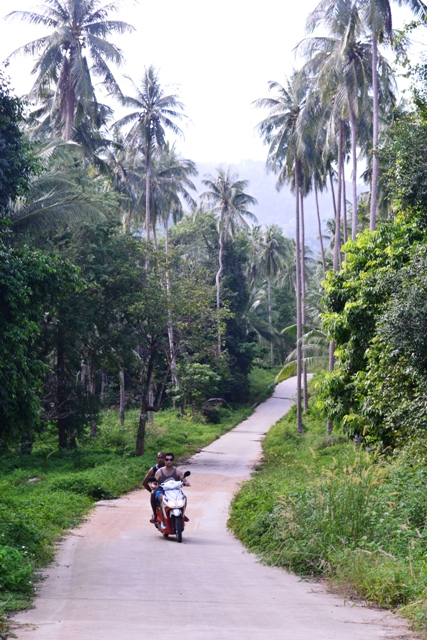 9. Beach hop your way around.

Why come to an island if you’re not going to bask in the sun, swim, snorkel and float in the salty sea? As long as you have petrol in your scooter tank, there’s a plethora of beaches to explore around the coast. Whilst Lamai beach is well known with its abundance of sea front restaurants, massage stalls and bars, it is extremely busy and serves as a place to socialise rather than relax. Coral cove wedged in between gigantic boulders is a smaller, cosier spot whilst Bang Por beach(down the road from our house) is quiet with calm waters and occasional walkers passing by. To catch the sunset, head to the Nathon side and watch it slink away below the shallow waters where silhouetted fishermen sit in their longtail boats. 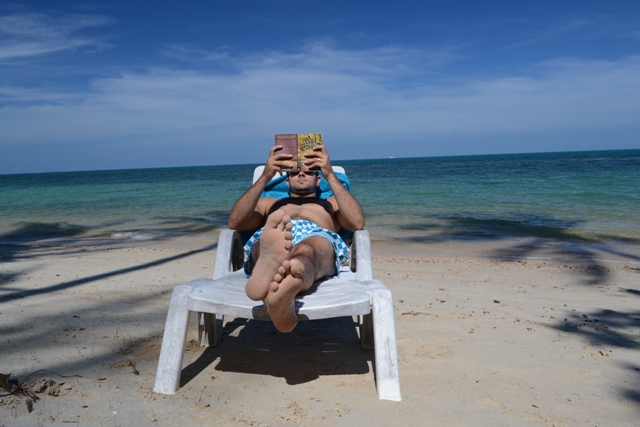 The idyllic beach of Bang Por. 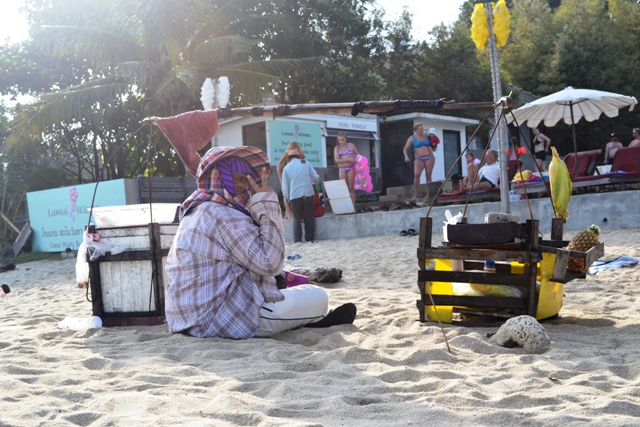 A vendor on Lamai Beach. 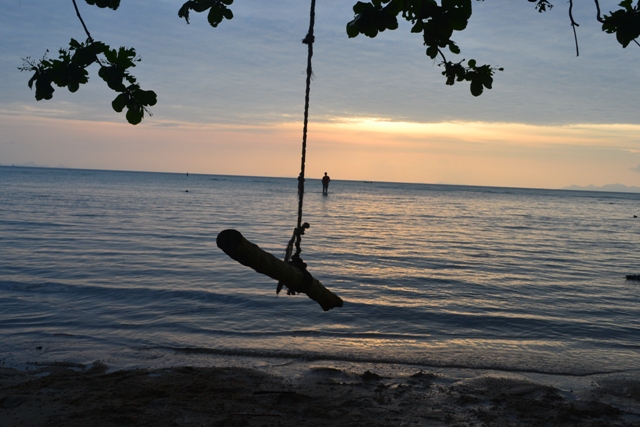 10. Grill all you can eat at Maenam’s BBQ Buffet.

If you’ve had your fill of noodles, rice and the usual suspects of white meats chicken, pork or seafood, it’s time to visit a BBQ buffet. They are scattered all over Samui, but I’ve found that the meat and service is top notch at the one in Mae Nam. For only 139 baht, you can go wild and pack your plates full of every kind of meat(including beef), vegetables, salads, seafood plus there’s fruit and ice-cream (at selected venues). You’ll get a grill with searing flames in a bowl below it on your table. Waitresses will pour water in the ring around the grill and that’s where you can boil your vegetables and seafood, whilst you can fry your bacon, beef cuts and chicken on the grill. It’s probably the best value for money you can find on the island. 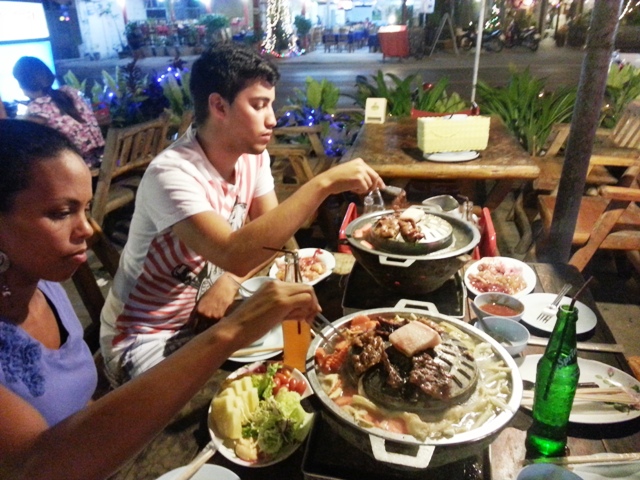