Whilst most people flock to Kuala Lumpur and Penang first, I have decided that Malacca (Melaka in Malay) is unequivocally my favourite Malaysian city.  As a crucial trading port for over 600 years, the city reveals an unexpected mix of historical remains from the British, Dutch and Portuguese rule beside funky graffiti and wall art, Malacca is Malaysia’s hippest and most historical city.  Here’s why we love it.

When a place has been named a UNESCO World Heritage site, you know there’s going to have history abounding, beautifully restored buildings and the remains of a bygone era.  When it comes to vivid history, Malacca has many tales to tell and signatures of the past to bear witness.  From colourful shop houses dating back over 100 years to the last remaining past of the Portuguese Fort, A’Formosa.  The Ruins of St. Paul’s alone (dating back to 1521) sheds light on the many Colonial powers that fought over this land.  First a chapel built by a Portuguese sailor, the first school in Malaysia, a powder magazine for the British and a mausoleum for Dutch and British dignitaries. 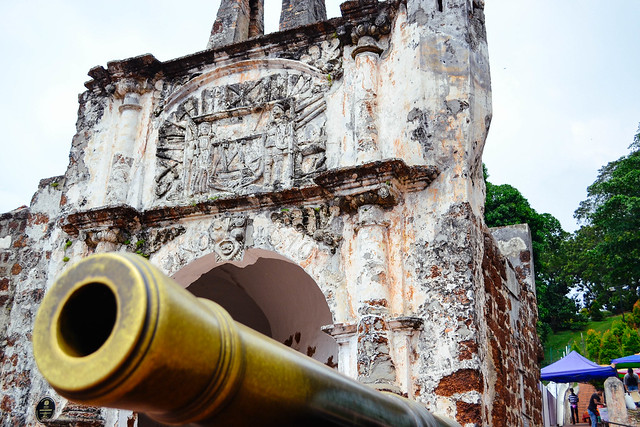 A’Formosa, the only remaining part of the Portuguese Fort. 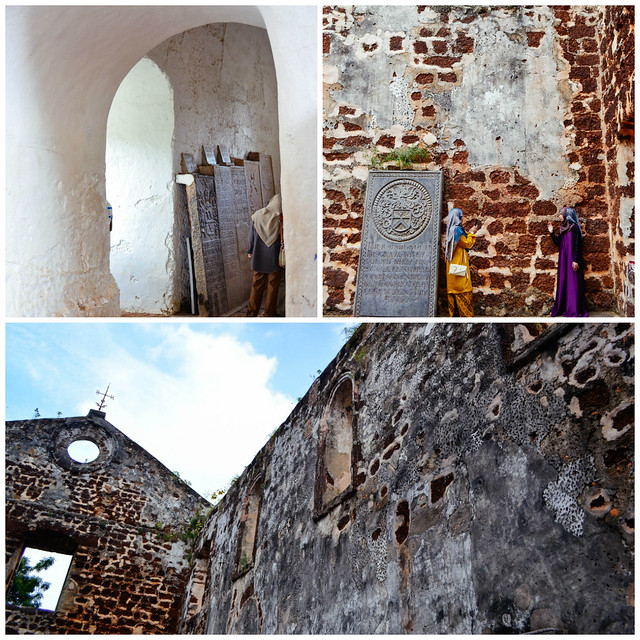 The Ruins of St. Paul’s. 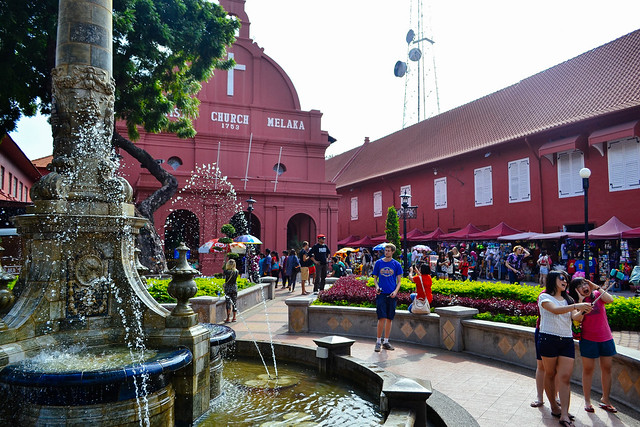 If you enjoy walking tours, join the free Heritage tour which begins at the Tourism Office opposite the Stadthuys and learn about Melaka’s beginnings.

Whilst I’m sure some residents may argue that the funky graffiti and wall murals takes away from Malacca’s historical richness, I feel it really just adds a modern, funkier side.  Cycle or walk along the banks of the Melaka River and see depictions of Malaysia’s various cultures in full colour; Indian, Chinese and Malay. Some sections show the fight for this land from the first warriors to the later day sultans who claimed independence for this state. In and around Jonker Street and near Malacca Straits Mosque you’ll find a new urban face of colours and edge. 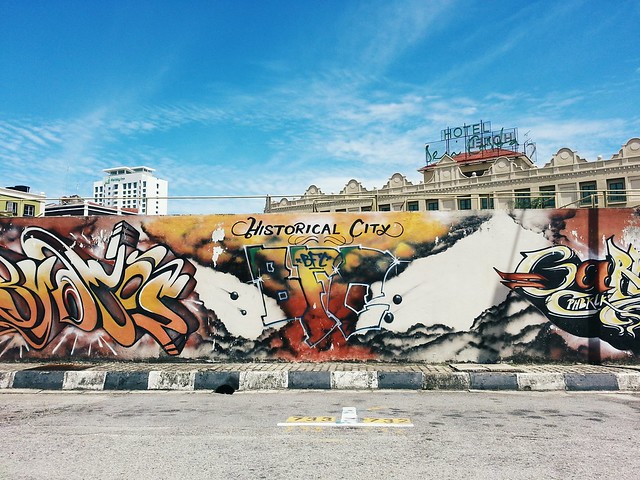 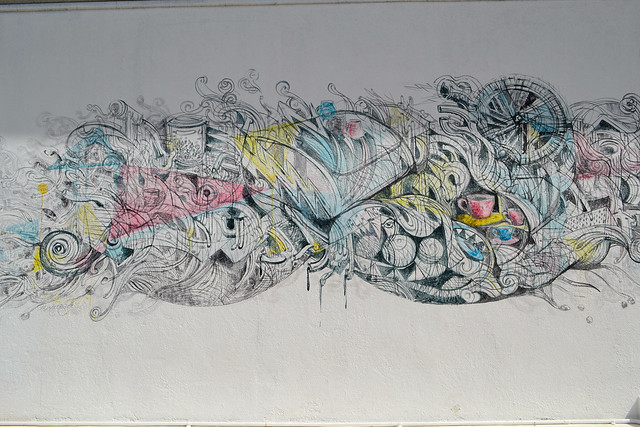 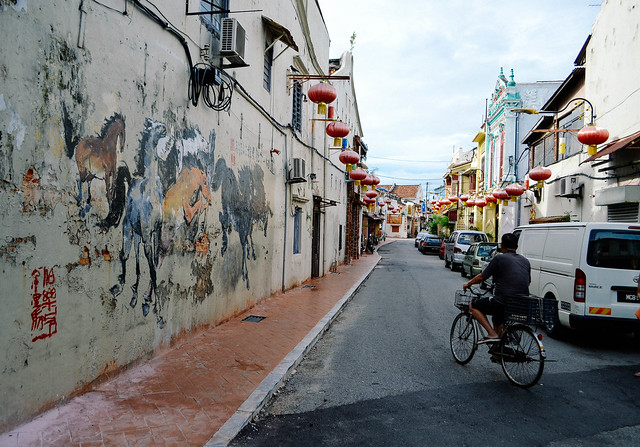 If you’d prefer to rest your weary legs, hop on the 45 minute Melaka River Cruise which departs from the Muara Jetty beside the Quayside Heritage Centre (Look out for the huge Portuguese Ship- Maritime Museum.) It has recorded commentary and allows you to take in Malacca’s daily bustle or evening lights. 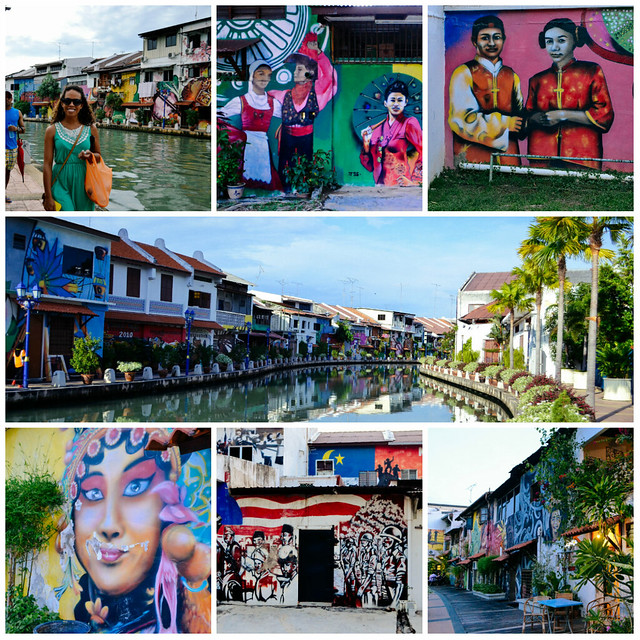 3. What Pre-War Architecture dreams are made of.

It must be known that I have a deep love for arched doorways, colourful shutters, aged windows and buildings with tired personality. Pre-war shop houses, Sumatran-style Mosques and narrow Melaka townhouses of the Baba Nyonya stand alongside colonial architecture in Malacca. And if quaint nooks, intricate design and restored buildings are your thing, Malacca will mean instant love for you. 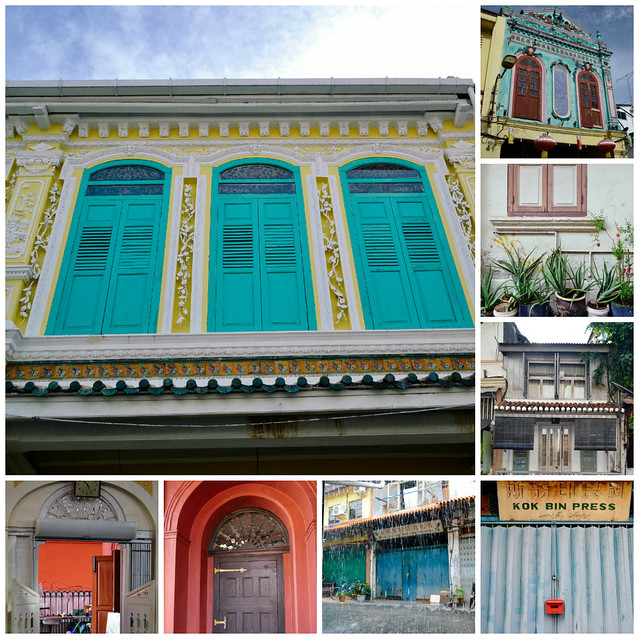 The Babas (men) and the Nyonyas (women) are a cultural group formed by the marrying of the Malay and Chinese.  The first union dates back to the Sultan Mansur Shah marrying the Chinese princess, Hang Li Poh, to create a strong trade union between these two nations.  His entourage married her maidens and a new culture emerged with their own traditions, dress, décor and cuisine.

We joined a cooking class at the Majestic Malacca Hotel and made Chicken Pongteh and Pineapple Prawn curry with Master Peranakan Chef Pow. 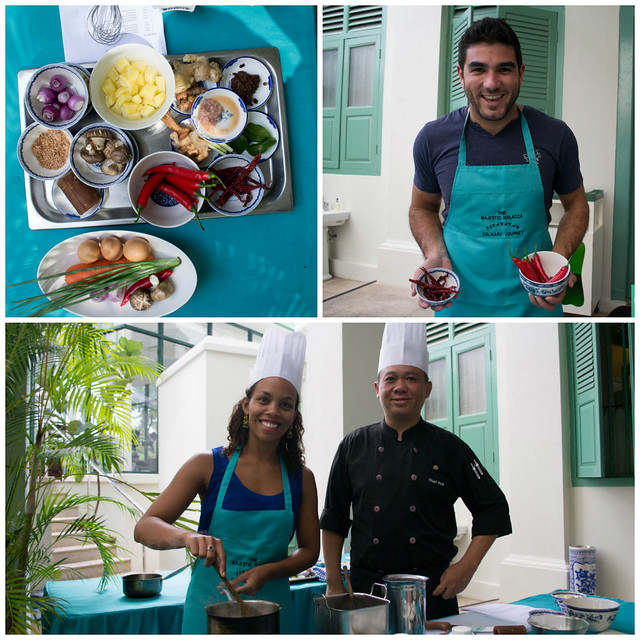 Our Peranakan cooking class at the Majestic Malacca Hotel.

Malacca is home to some of the oldest mosques and temples in the country. All found along Jalan Tokong which morphs into Jalan Tukang Emas halfway.   Jalan Tukang Emas has been nicknamed Harmony Street as places of worship for all three of Malaysia’s main religions can be found with 50 metres of each other.

Cheng Hoon Teng is the oldest temple in Malaysia, build in 1673 and dedicated to the Goddess of Mercy, it is visited by Taoist, Buddhist and Confucian followers. Kampung Kling Mosque has Portguese-glazed tiles, Corinthian columns, a Victorian chandelier and a wooden pulpit with hindu and Chinese-style carvings. Sri Poyatha Vinayagara Moorthy is one of the oldest functioning Hindu temples in maritime South East Asia and one of the few Chitty temples existing in Malaysia. It is dedicated to the elephant deity Ganesha. 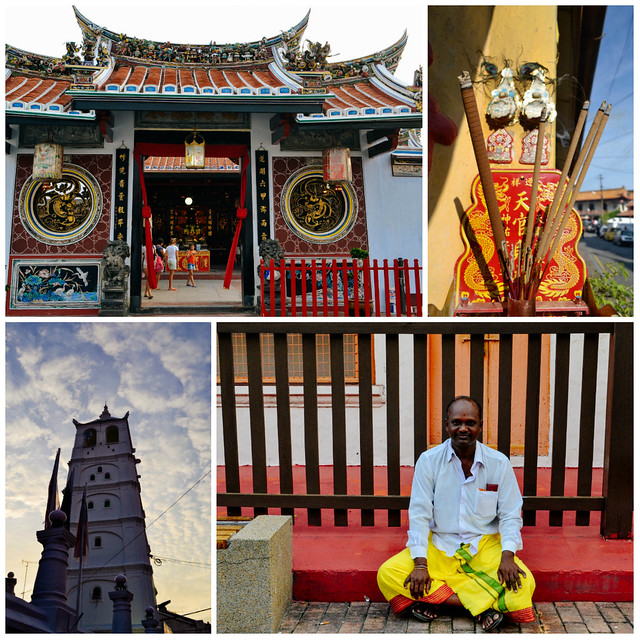 Aside from Baba Nyonya food, you’ll find a plethora of other food, desserts and drinks to enjoy.  There’s the buzzing Geographer’s Café which attracts many locals and foreigners alike with a bar, live music and sometimes dancing. Choose between Indian cuisine, Italian cafes, Chinese cafes and Malay satay stands. 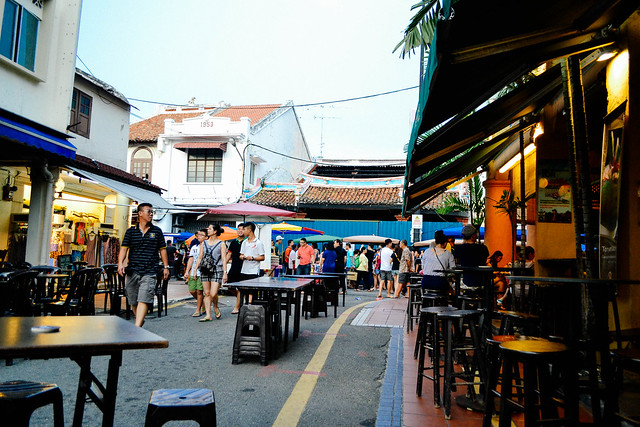 The Geographer’s Cafe on the corner of Jonker and Jalan Hang Jebat.

Whilst Malaysia is definitely not known of its coffee, there are a few goodies to be found once we had wondered around.  Calanthe Art Café ( Jalan Hang Kasturi off Jonker) can be found right in the mix of it all and offers coffee blends from each of Malaysia’s 13 states as well as espresso-cased favourites, desserts, food and free wifi.  But our favourite has got to be Alley no.5 ( no. 5 Lorong Jambatan) which is about 3 blocks away from Jonker and right beside the Melaka River. It’s quiet but the espresso and peaceful cafe is worth the stroll.  There’s also Mods Café ( Jalan Tokong) with its indoor 1978 Volkswagen Kombi Campervan which has been beautifully restored and coverted into a ‘mobile coffee shop’.  Try the Vietnamese drip coffee at Baboon House (89, Jalan Tun Tan Cheng Lock). 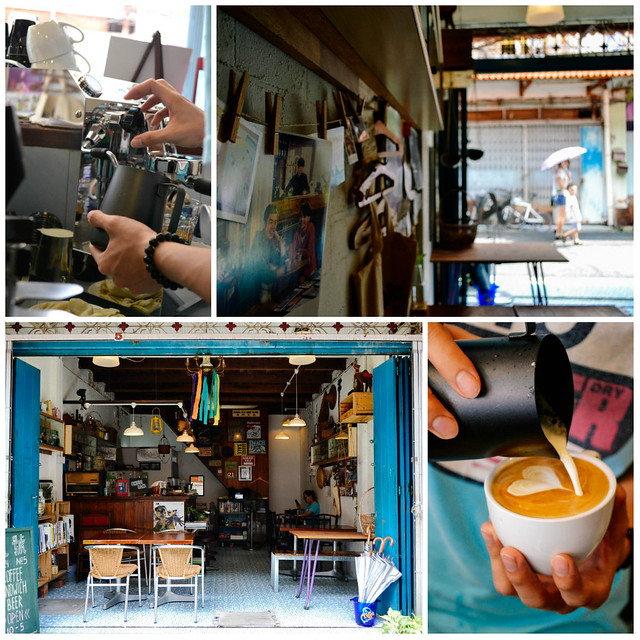 Love the coffee at Alley no.5.

A warning for coffee lovers and those in search of breakfast, nothing and I mean nothing opens before 10am in Malaysia. Find cheap breakfast sets Riverside Kopitiam or sandwiches, yoghurt and pancakes at Limau-Limau Café (No. 9, Jalan Hang Lekiu). Halia Inc. Restaurant and coffee Bar (No 1 Jalan Merdeka. Quayside Heritage Centre.)has delicious fresh toast, hotcakes and Eggs Atlantic-poached eggs with salmon. 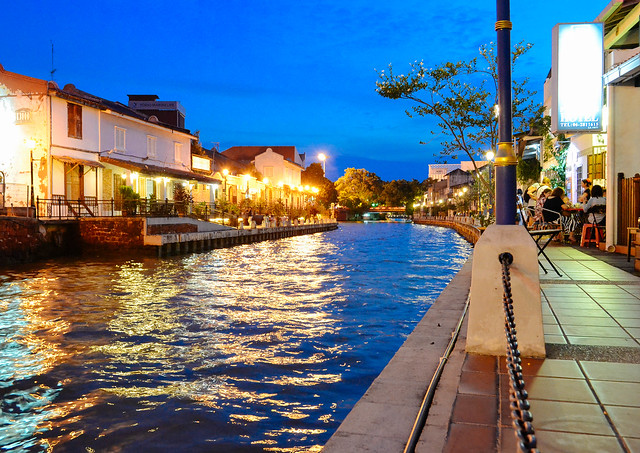 I am a huge fan of markets, but the Jonker Street night market has become so popular that I try to avoid it now. While you can find a few quality things in amongst the cheap junk and experiment with some tasty treats, the crowds become so thick that you are caught in a wave of slowly moving people.  And once you’re caught in there, it is quite tough to escape.  I really prefer visiting Jonker Street before 6pm when I can visit the boutiques and other shops there.  The streets around Jonker have even better buys. 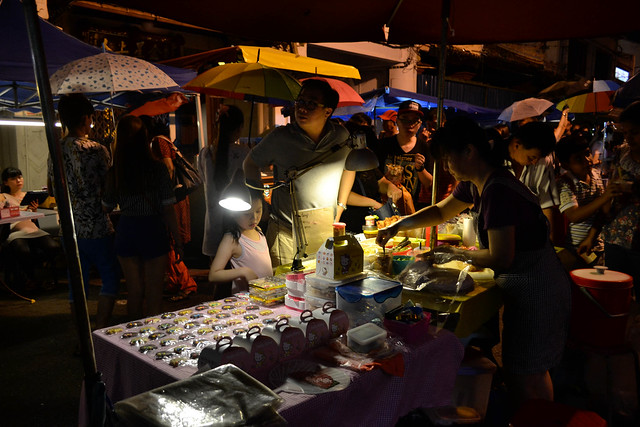 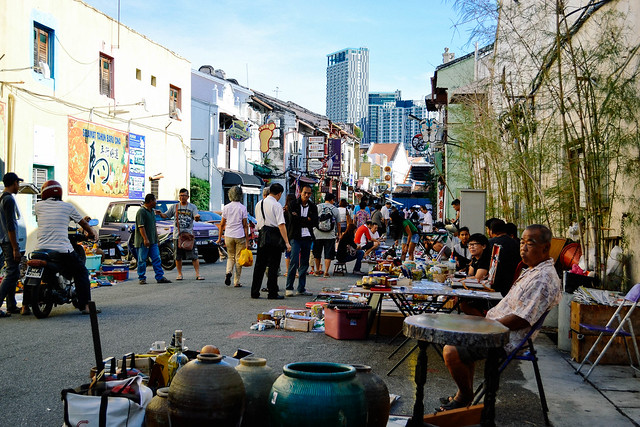 You can find antique stores with everything from gramaphones to typewriters and Chinese pottery; art galleries, clothing boutiques and pottery stores (which also offers classes).  For those with a love of jewelry, scarves, rugs and pashminas, Razkasmir on Harmony Street is where you’ll a mix of turquoise, coral, silver jewelry and crafts made in India, Nepal, Tibet and Kashmir. 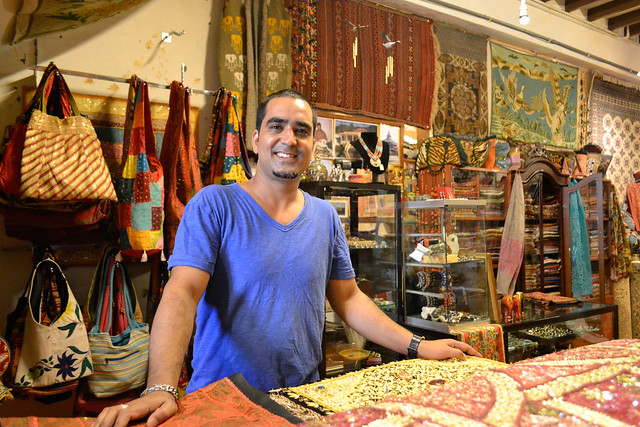 Zaffar, one of the owners of Razkasmir on Harmony Street.

There is no airport in Malacca, so your only option is by road.

From KL, it will take you around 2-3 hours to reach Malacca.  Taking KTM train from Kuala Lumpur (KL Sentral) to TBS Bus station.Take a bus from TBS.  A bus leaves the terminal for Malacca every 30 minutes.

Here are 3 ways to get a bus ticket:
a) Go to the ticket window at the bus terminal such as Terminal Bersepadu Selatan, give your destination and you’ll be informed which bus operators are leaving and the number of vacancies.
b) Go to the electronic bus ticket machines where you can buy one ticket at a time in cash.
c) The easiest way is to book your ticket online through Easybook.com.

– When you arrive in Melaka The Bus will stop at Melaka Sentral. From there you can use a Taxi to the city centre or Take the “Panorama Bus”. These buses are always available through out the city. You can use these buses to get around Melaka at a cheaper price. Look out the buses written “PANORAMA”. You buy the ticket on board every time you board the bus.

– Trishaws: The price of a 1 hour ride are usually 40 RM, but can be negotiated in advance if you negotiate with the trishaw driver. 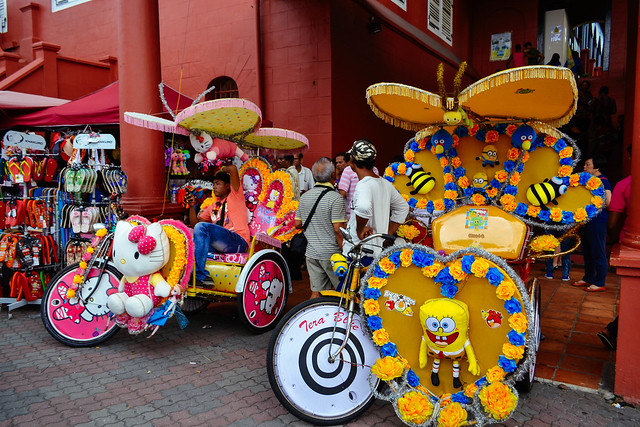 The pimped trishaws of Malacca.

– Self-Guided walking Tour: Buy a Melaka Street Map from the Tourist Information Office at the Dutch square and start from there. 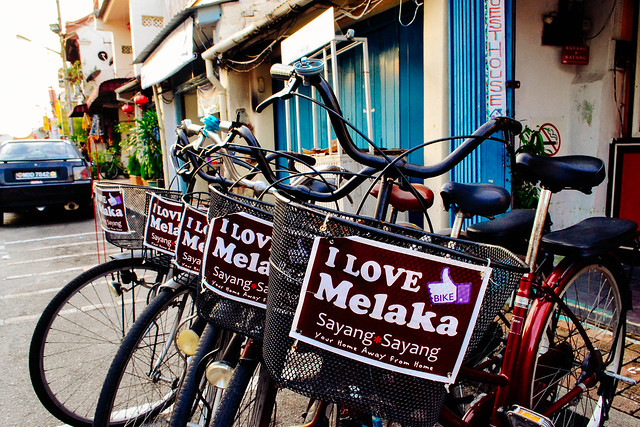