Last December Marliese and I went on my virgin Weihnachtsmarkt pilgrimage to Deutschland. Being married to a frau (woman) with German heritage has finally paid off. Thrown in with the marriage licence is real life translator. Score!

If you search “Best German Xmas market” the same players and lack luster reviews come up over again. You’ll be told about the quantity of stalls and their relative position to a church or bell tower. The sentiment translates as a sales pitch trying to sell package tours.

What I discovered during our holiday is that the essence of Christmas markets has not been done justice by the myriads of English articles. Without knowing the culture and language, the Christmas market charm will be lost.

“Fear not!” ScooterSteve is here to decode the best, and worst, of Weihnachtsmärkte. 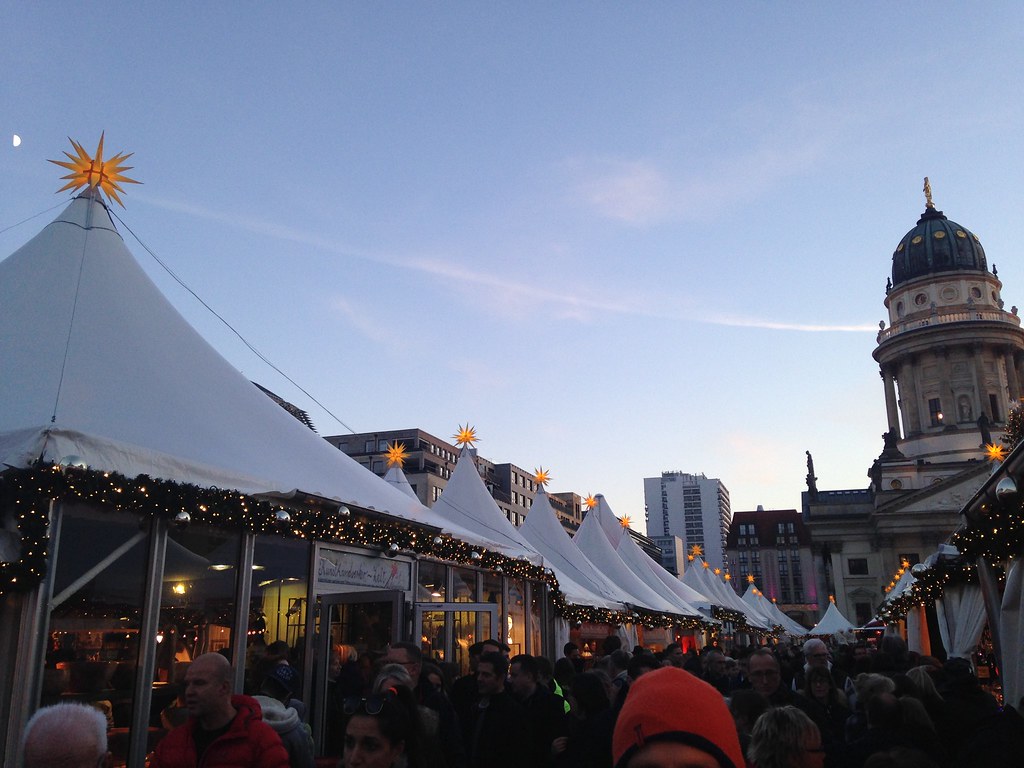 The origin of the Weihnachtsmarkt dates back to the 13th century and on opening night you’ll feel like you’ve time travelled back to the middle ages.
4 weeks before Christmas the markets open to an ornate pageantry. The Christkind (aka baby Jesus) is paraded into the square to usher in Advent. This incarnate of Jesus is usually a small girl to give the scene a more angelic appearance! Confused? Me too! Probably some misunderstood German humour! This is why many markets are also called Christkindlesmarkt. Paying homage to Christ’s child (aka baby Jesus.)

Marliese and I were on a 4 city tour. Frankfurt, Berlin, Nuremburg and Salzburg. Our mission? To sample as many markets and their food as we could. Yup! When we travel we like to eat our way through the day!

In Frankfurt I discovered the collectable glühwein mug

If you fly SAA or Lufthansa from Johannesburg chances are you’ll end up in Frankfurt. Let me be the first to say, “stay a few days”. There is more to Germany than München (Munich) & beer.

The main market is called Weihnachtsmarkt Frankfurt Römerberg. The Römerberg referring to its location in the heart of the city. Ooops! I am sounding like all those travel agency websites.

Here’s what no one tells you about the markets. Every Weihnachtsmarkt has a collectable mug that you drink glühwein out of. What a spectacular find! They are so ubiquitous that I think they have been taken for granted by other bloggers. It’s one of those accepted traditions that is not written about. For this Saffa the mugs became a take home memento of my trip. And boy did I collect a few. 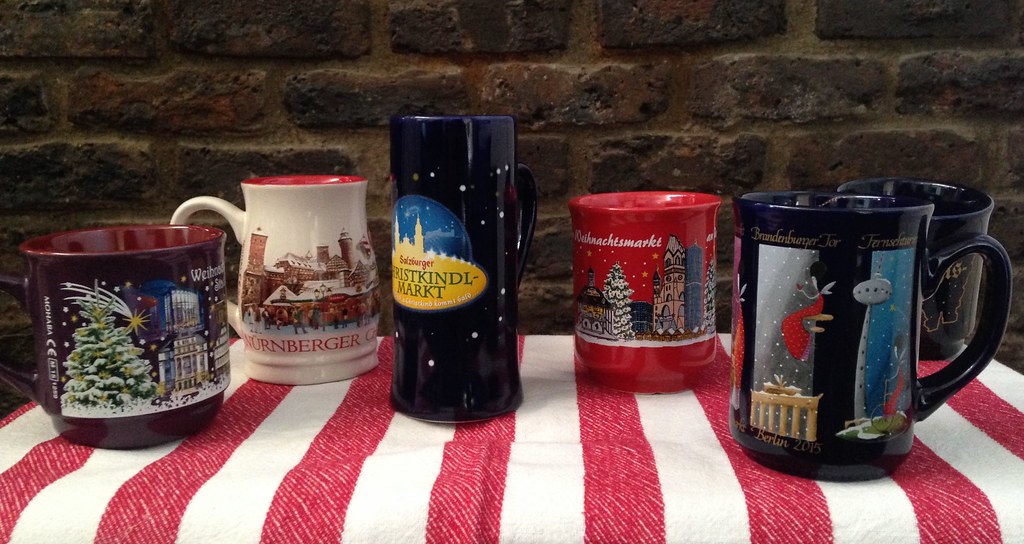 Mug etiquette: You will pay a €3 returnable deposit for your mug. But why would you give the mug back right?

Now that I had been initiated into the mug collecting culture, I was keen to leave the hustle of the city and find a quieter, less touristic Weihnachtsmarkt. Auf Wiedersehen Frankfurt. (‘till I see you again Frankfurt)

Why do they keep asking me, “Mit Schuss?”

A quick 40km high speed train commute from Frankfurt is the town of Aschaffenburg. Unlike the big cities that cater for tourists, Germany’s smaller towns are mostly absent of English. What a pleasure!

I immediately felt at home in Aschaffenburg. Their Christmas market is positioned next to the Schloss Johannisburg. As a Jozi boy I felt at home!

*A schloss is a castle or fortress. 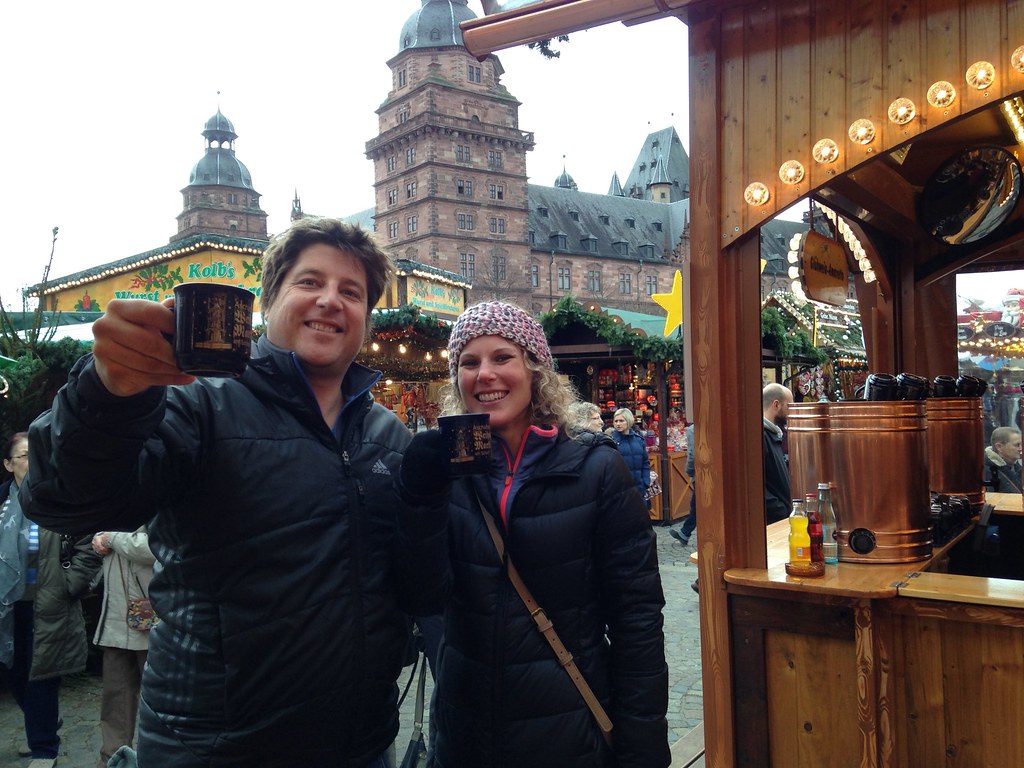 Weihnachtsmärkte are synonymous with glühwein. What had been confusing me since Frankfurt is that every time I ordered a glühwein I was asked, “Mit Schuss?” The correct answer I found out was “Ja Bitte” or “yes please!”
Roughly translated the barkeep was asking if I’d like a shot of Amaretto in my glühwein. A mug of fruity glühwein is akin to a glass of wine. Now add a shot of almond booze. Suffice to say “Mit Schuss” became the new standard and all sobriety was to be lost for the rest of the trip!!!

Next thing I knew I woke up in Berlin. That’s a lie. My wife would never allow me to go on an unhinged glühwein binge!

In Berlin I found raclette – the cheese of happiness!

Berlin is the Weihnachtsmarkt capital of Germany. There are too many to visit and explore. So don’t try. Head straight to Gendarmenmarkt. It’s a 5 star experience with a €1 entry fee that keeps it exclusive. I loved the fact that local artisans were selling their wares, unlike most other Weihnachtsmärkte that stock mass-produced Chinese imports. 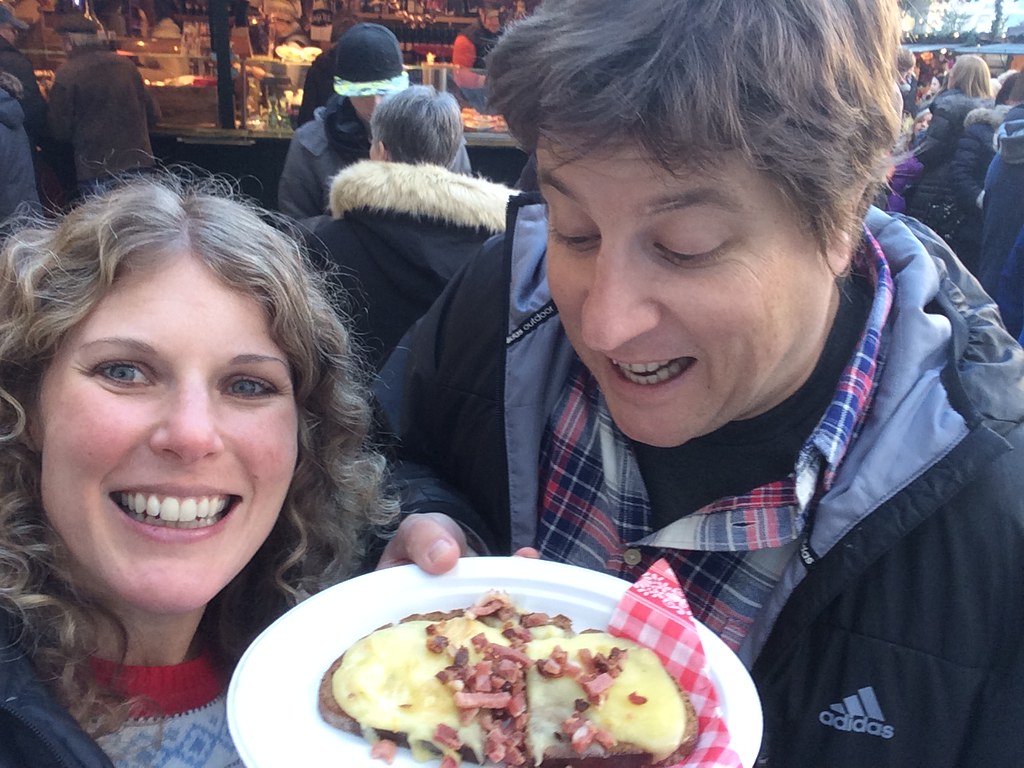 For 38 years I have been trapesing this earth unware of this amazing cheese. The Swiss are the architects of many of life’s pleasures. Chocolate, half of Trevor Noah and Raclette! It’s a mild tasting cow cheese that is grilled to melting point, scraped onto rye bread and served with crispy bacon. In Gendarmenmarkt I died and went to heaven!

In Nürnberg redemption is a würst! (sausage)

If heaven is to be found in Gendarmenmarkt, then the opposite is to be found at Nürnberger Christkindlesmarkt. (in Nuremberg).
On paper this market ticks all the boxes. Its location is the picture postcard for Christmas Markets. 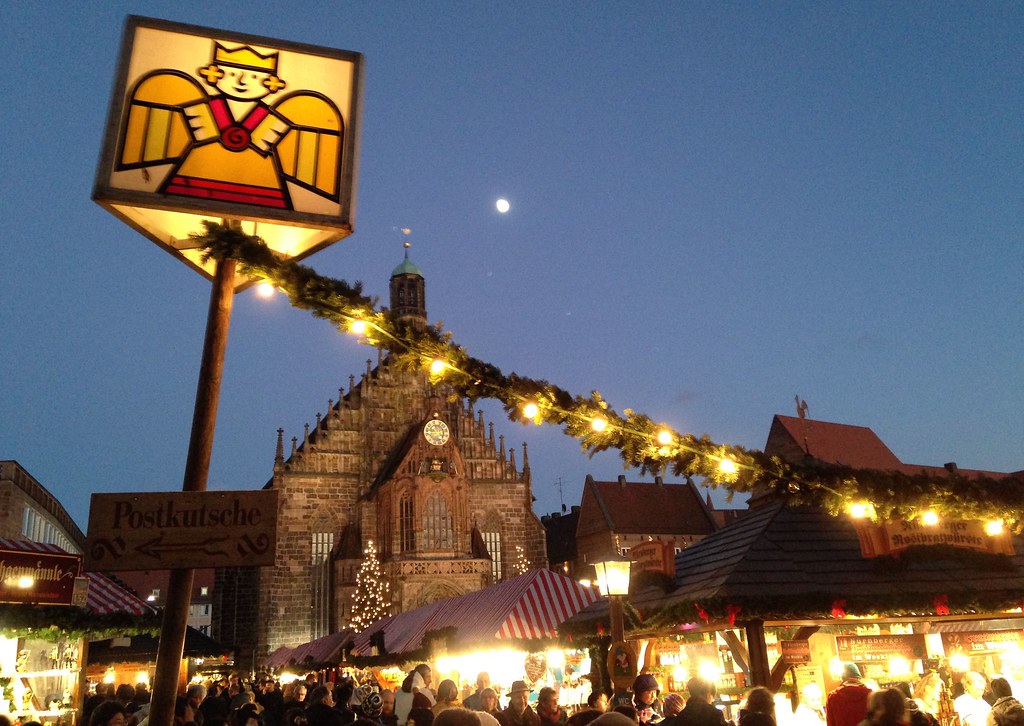 The Frauenkirche (Church of Our Lady) imposes her façade as the spectacular backdrop to the main market. But that’s all its got going for it. Dozens of coach buses line up for miles to express their camera-clad passengers onto the square.

But what was I to do? We were in town for the night and had to make the most of it. Alas, redemption came in the form of a würst. Not one but 3!
“Drei im Weggla.” That’s how Bavarians ask for 3 sausages in a bread roll. Simple, tasty and cheap!
Like the camera clad tourist, you’ll find this staple everywhere in Nürnberg. 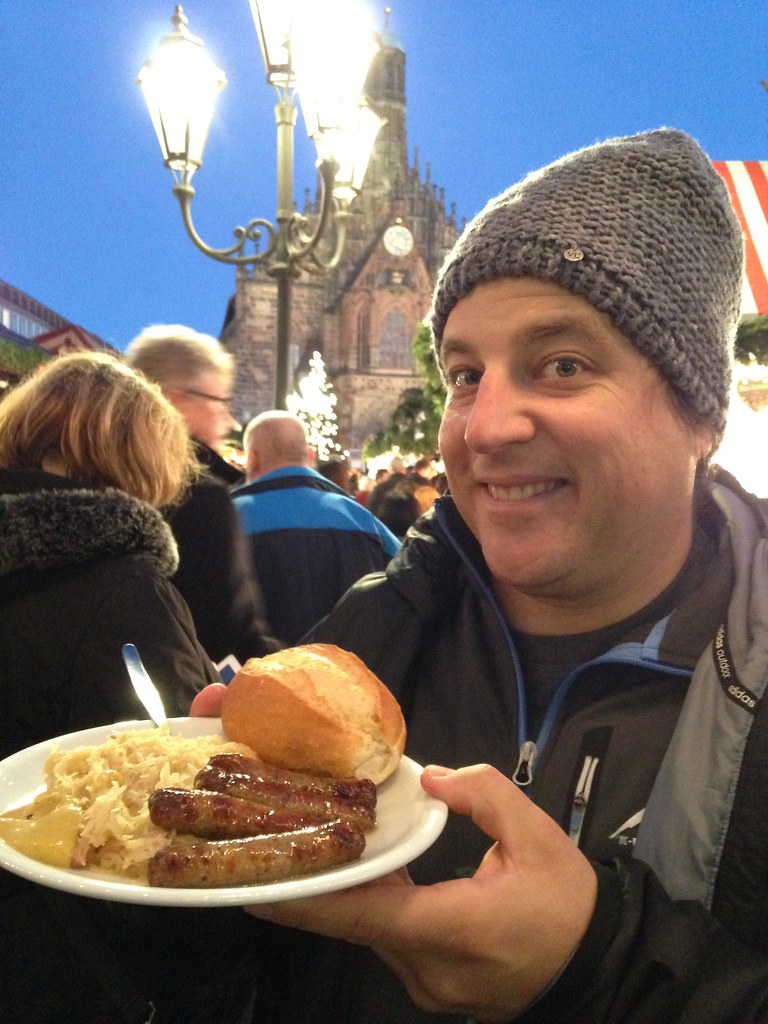 Don’t get me wrong. You must visit Nürnberg. It’s a city with beautiful cobbled streets and epicurean delights around every corner. And not to forget the daunting parade grounds of the SS Party (Nazi). But the market is too popular and has sold out.

There is one reason Salzburg in Austria is the most popular Christmas destination in Europe. Unlike the Germans which close shop on the 23rd of December, the Austrians keep the Advent candles burning. You have been warned. Germany only awakens from it’s glühwein haze around the 27th.

Getting there: Deutsche Bahn’s Freizeit-ticket will get you return from Munich to Salzburg in 1,5 hours for a bargain price of €30.
(http://www.salzburg.info/en/arrival_traffic/train/salzburg_by_db) 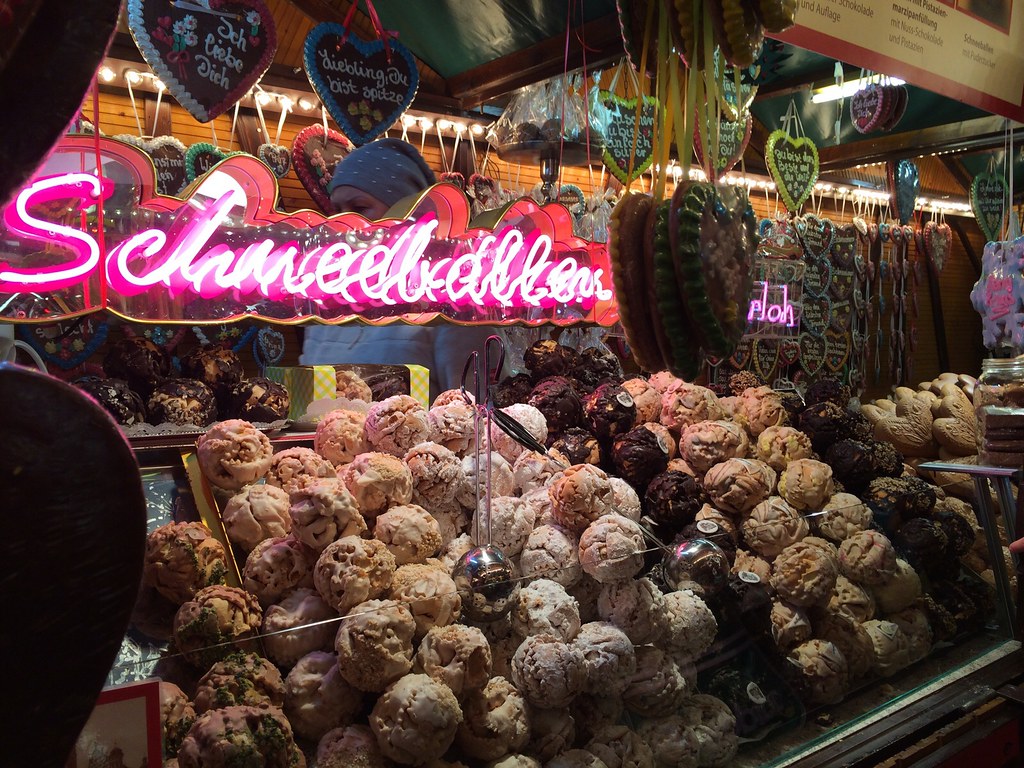 The birthplace of Mozart, Sachetorte and Red Bull. All good reasons to head to Salzburg! But did I mention that Salzburg stays open for Christmas? And they have a few more treats worth speaking about.

Apart from glühwein, ginger bread and stollen (fruit bread) there is an absurd treat to be found at most markets. Schneeballen (snowballs!).
It’s a world away from being icy! Think short crust pastry rolled into a ball, deep fried and coated in flavours from the far corners of calorie-licious! Christmas had come early for Marliese. All that was left to do was for me to order another glühwein, “Zum Wohl!” (Good health!) 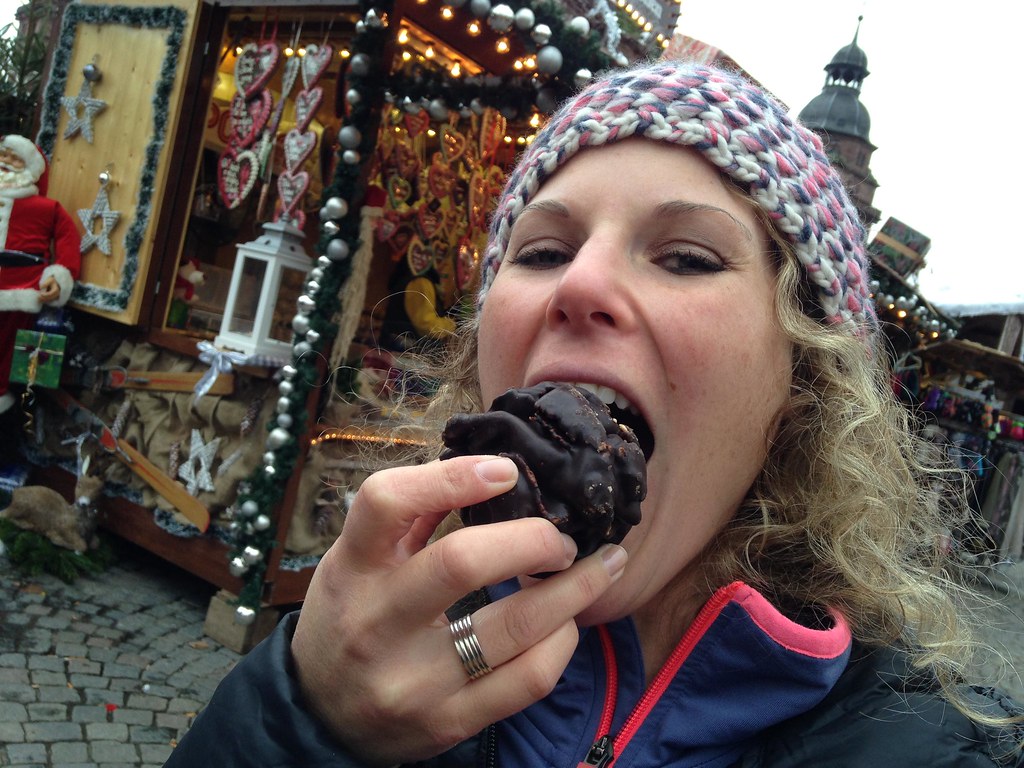 Ps. If was mislead into believing I would experience a white Christmas. The days of Europe being powder coated in December are over. It’s more like a green Christmas these days.

Disclaimer: It’s 9 months since our Weihnachtsmarkt adventure and I am yet to shed the 3 kg’s I put on.

My real name is Steven Warriner. By day I am a South African based reality TV director. The passions that define me are travelling, beer and scooters of course! My philosophy is #scooterfreedom - Scooter freedom means being able to travel anywhere, park everywhere, at anytime! My blog is my outlet to share my love for adventure with whoever wants to read it. Sometimes I write about scooters, sometimes not. One thing for sure is I try be as real as possible without being too offensive. Follow Steve on Twitter and Facebook: @ScooterSteveSA