You are here: Home / Sleep / Africa / Top 10 South African Campsites.
41
SHARES
FacebookTwitterStumbleuponBufferPinterestPocketGoogleWhatsapp
Mail
[cs_section parallax=”false” style=”margin: 0px;padding: 45px 0px;”][cs_row inner_container=”false” marginless_columns=”false” style=”margin: 0px auto;padding: 0px;”][cs_column fade=”false” fade_animation=”in” fade_animation_offset=”45px” fade_duration=”750″ type=”1/1″ style=”padding: 0px;”][cs_text]First published in Sawubona Magazine September 2017.[/cs_text][cs_text]There’s really no better place to unwind, commune with nature and bond with family than in a tent. Having grown up spending my summer nights around camp fires, waking up in a tent and spending early mornings on the beach, I can’t think of any better way to spend a holiday. Here are some of my top picks of campsites around South Africa… 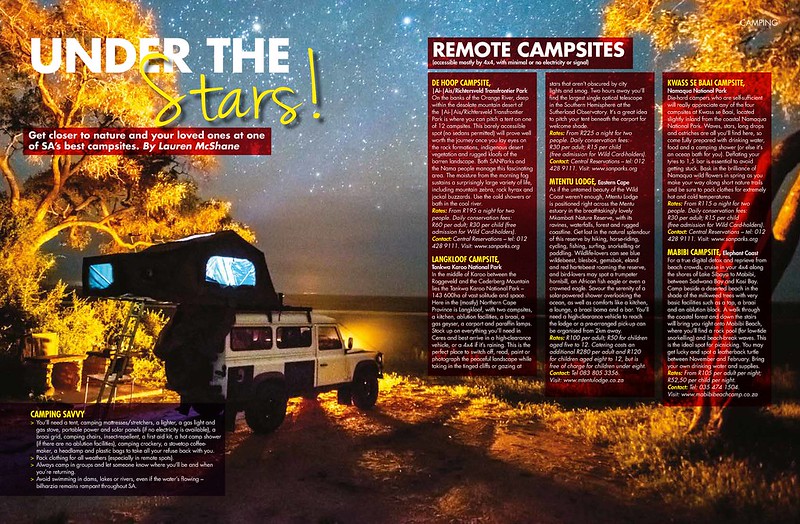 [/cs_text][cs_text]1. De Hoop Campsite, |Ai-|Ais/Richtersveld Transfrontier Park[/cs_text][cs_text]On the banks of the Orange River, deep within the desolate mountain desert of the |Ai-|Ais/Richtersveld Transfrontier Park is where you can pitch a tent on one of twelve campsites. This barely accessible campsite ( no sedans permitted) will prove well worth the journey once you lay eyes on the rock formations,indigenous desert vegetation and rugged kloofs of this barren landscape. This fascinating area is managed together by Sanparks and the Nama people and a surprisingly large variety of life is sustained through the moisture from morning fog-mountain zebra, rock hyrax and Jackal Buzzard amongst them. Use the cold showers or bath in the cool river.[/cs_text][cs_text]Rates: Camping from R195 a night for two people. Plus conservation fees R60 per day per adult, R30 per child per day (free to Wild Card-holders).
Contact: Tel 0124289111 (central reservations),www.sanparks.org[/cs_text][cs_text]2. Langkloof Campsite, Tankwa Karoo National Park[/cs_text][cs_text]In the middle of Karoo veld between the Roggeveld and the Cederberg mountain lies the Tankwa Karoo National Park; all 143600 hectares of vast open solitude and space. Here in mostly Northern Cape province is Langkloof with two camp sites, a kitchen, bathroom area, braai, gas geyser, car port and paraffin lamps. Stock up on everything you’ll need whilst in Ceres and best come in a high clearance vehicle or 4×4 if its raining. This is the perfect place to switch off, read, paint or photograph the peaceful landscape and relish tinged cliffs and stargaze in a place where the city lights are non-existent. Two hours away you’ll find the largest single optical telescope in the southern hemisphere at the Sutherland Observatory. It’s a great idea to try pitch your tent beneath the car port for some welcome shade. [/cs_text][cs_text]Rates: Camping from R225 a night for two people. Plus conservation fees of R30 an adult and R15 a child a day (free to Wild Card-holders).
Contact: Central reservations on 012 428 9111 www.sanparks.org [/cs_text][cs_text]3. Mtentu Lodge, Transkei[/cs_text][cs_text]As if the untamed beauty of the Wild Coast isn’t enough, Mtentu lodge happens to be positioned right across the river from the breathtaking Mkambati Nature Reserve set with ravines, waterfalls, forest and rugged coastline. Get lost in the natural splendour of this reserve with hiking, horse riding, cycling, fishing, surfing, snorkelling or paddling. Game lovers can take a peek at some of the Blue Wildebeest, Blesbuck, Gemsbok, Eland and Red Hartebeest roaming the reserve and bird lovers may spot a Trumpeter Hornbill, African fish eagle or even a crowned eagle. Savour the serenity of a solar-powered shower overlooking the ocean and comfort such as a kitchen, lounge, braai bona and bar. You’ll need a high-clearance vehicle to reach the lodge or a pre-arranged pick-up can be organised from 2 km away.

[/cs_text][cs_text]Rates:R100 per adult camping. Kids aged 5-12 R50. Catering is an additional R280 per adult, kids aged 8 to 12 are R120 and kids under 8 are free.
Contact: Tel 0838053356, www.mtentulodge.co.za[/cs_text][cs_text]4. Kwass se Baai Campsite, Namaqua National Park[/cs_text][cs_text]Die Hard campers who are self-sufficient will really appreciate camping in one of these four campsites at Kwass se Baai slightly inland from the coastal Namaqua National Park. Waves, stars, long drops and ostriches are all you’ll find here, so come fully prepared with drinking water, food and camping shower ( else it’s an ocean bath for you). Deflating your tyres to 1.5 Bar is mandatory if you want to avoid getting stuck. Bask in the brilliance of the Namaqua Wild flowers in Spring as you make your way along short nature trails and be sure to pack clothes for hot and really cold weather. [/cs_text][cs_text]Rates: Camping from R115 a night for six people. Plus conservation fees of R30 an adult and R15 a child a day (free to Wild Card-holders), www.sanparks.co.za[/cs_text][cs_text]5. Mabibi Campsite, Elephant Coast[/cs_text][cs_text]For a true digital detox and reprieve from beach crowds, cruise along the shores of Lake Sibaya in your 4×4 down to Mabibi, situated between Sodwana Bay and Kosi Bay. Camp beside a deserted beach in the shade of the milkweed trees with very basic facilities such as tap, braai and ablution block. A walk through the coastal forest and down the stairs will bring you right onto Mabibi beach where beach picnics, rock pool ( for low-tide snorkeling), beach-break waves is all you’ll find and need. You may get lucky and spot a leatherback turtle between November to February. Bring your own drinking water and supplies.[/cs_text][cs_text]Rates: Camping from R105 a night for adults, R52.50 a night for kids.
Contact: Tel 0354741504, www.mabibibeachcamp.co.za[/cs_text][cs_text] 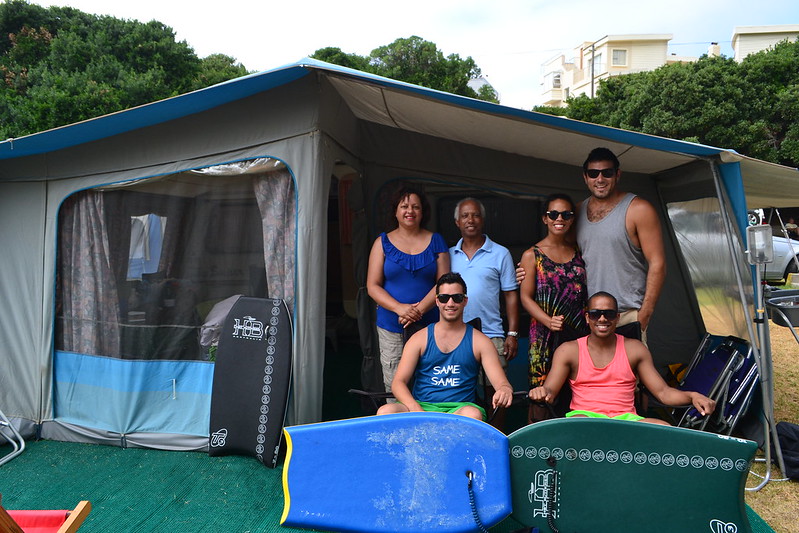 Camping with my family along the Garden Route. 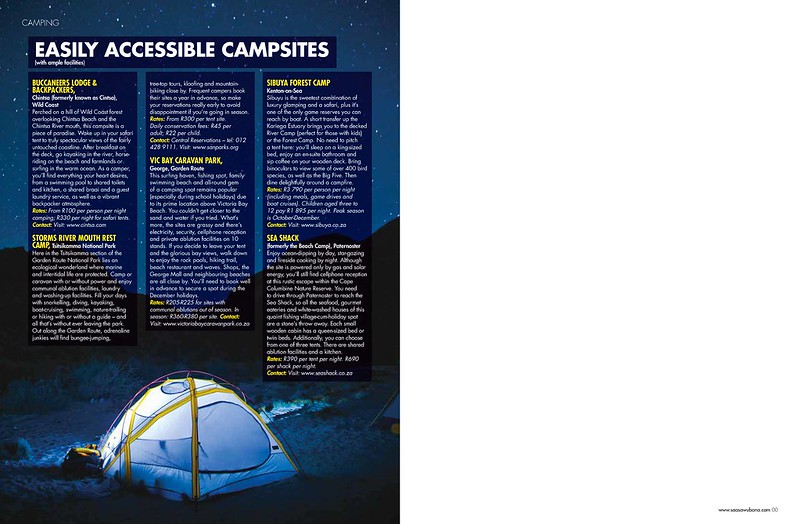 [/cs_text][cs_text]6. Buccaneers, Chintsa ( Formely known as Cintsa) ( Wild Coast)[/cs_text][cs_text]Perched on a hill of wild coast forest overlooking Chintsa beach and the Chintsa river mouth, is where you’ll find Buccaneers Lodge and Backpackers. Wake up in your safari tent to truly spectacular views of this fairly untouched coastline and after breakfast on the deck, go kayaking in the river, horse riding on the beach and farmlands or surfing in the warm ocean. As a camper you’ll find everything your young, wild heart desires such as swimming pool, vibrant backpacker atmosphere, shared toilets and kitchen, shared braai and guest laundry service.[/cs_text][cs_text]Camping from R100 per person per night ( R330 for safari tents).
Book on www.cintsa.com [/cs_text][cs_text]7. Storms River Mouth Rest Camp, Tsitsikamma National Park[/cs_text][cs_text]Here in the Tsitsikamma section of the Garden Route National Park lies an ecological wonderland where marine and inter-tidal life are protected. Camp or caravan with or without power and enjoy communal ablution, laundry and washing up facilities. Fill your days with snorkelling, diving, kayaking, boat cruising, swimming, nature trailing or hiking with or without a guide- and that’s without ever leaving the park. If you venture out along the Garden Route, adrenalin junkies will gleefully find bungee jumping, tree top tours, kloofing and mountain biking close by. Frequent campers book their sites a year in advance so book really early to avoid disappointment unless you’re going out of season. [/cs_text][cs_text]Tent sites from R300. Daily conservation fees for adults R45, kids R22.
www.sanparks.org[/cs_text][cs_text]8. Vic Bay Caravan Park, George Garden Route[/cs_text][cs_text]Surfing haven, fishing spot, family swimming beach and all around gem of the Garden Route, this camping spot remains popular (especially during the school holidays) due to its prime location above Victoria Bay beach. You can’t get closer to the beach if you tried plus the sites are grassy, with electricity, security, cellphone reception as well as private ablutions on 10 stands. If you ever decide to leave your tent and the glorious bay views, walk down to enjoy the rock pools, hiking trail, beach restaurant and waves. Shops, the George Mall and neighbouring beaches are all close by to keep you and the family busy. You’ll need to book well in advance to get a spot during the December holidays. [/cs_text][cs_text]Sites with communal ablutions out of season, R205-R225. In season R360-R380.
http://www.victoriabaycaravanpark.co.za[/cs_text][cs_text] 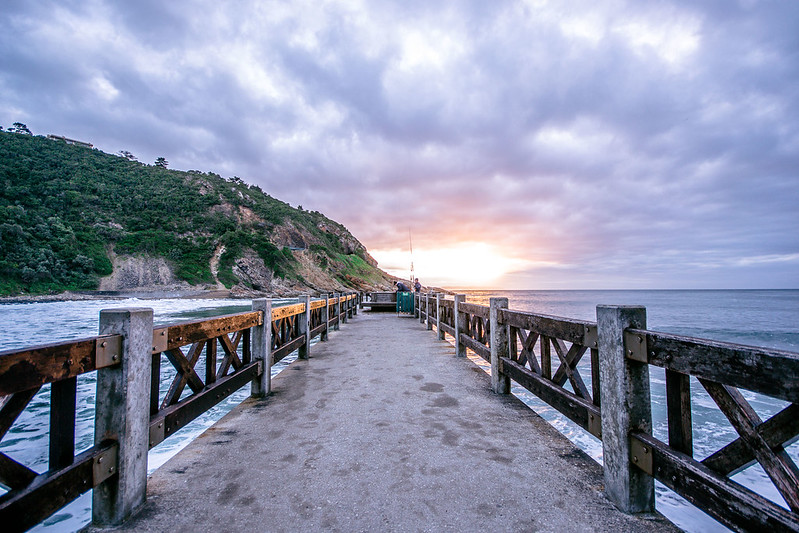 \[/cs_text][cs_text]9. Sibuya Forest Camp, Kenton-on-Sea[/cs_text][cs_text]Sibuyu is the sweetest combination of luxury glamping and safari plus it’s one of the only game reserves you can reach via boat. A short transfer up the Kariega Estuary will bring you to the decked River Camp (perfect for those with kids) or the Forest Camp both nestled within riverine forest. No need to pitch a tent here; you’ll sleep on a king bed, enjoy an en-suite bathroom and sip coffee on your wooden deck. Bring your binoculars to try a view some of over 400 bird species as well as the Big Five and more and dine delightfully around a camp fire. [/cs_text][cs_text]Price per person per day ( including meals, game drives and boat cruises) R3790 ( Peak time Oct-Dec) Children between 3-12 R1895.
http://www.sibuya.co.za[/cs_text][cs_text]10. Sea Shack ( formerly the Beach Camp), Paternoster[/cs_text][cs_text]Ocean dipping by day, star gazing and fireside cooking by night. Powered only by gas and the sun, you’ll get to veer slightly off the grid but still find cellphone reception at this rustic escape within the Cape Columbine Nature Reserve. You’ll have to drive through Paternoster to get to the Sea Shack so all the seafood, gourmet eateries and white washed houses of this popular seaside town will be a pebble’s toss away. Each small wooden cabin has a queen sized bed of twin beds or you can choose from one of three tents. There are shared showers, toilets and a kitchen.[/cs_text][cs_text]Tents from R390 per night, Shacks from R690 per night.
http://www.seashack.co.za[/cs_text][cs_text] 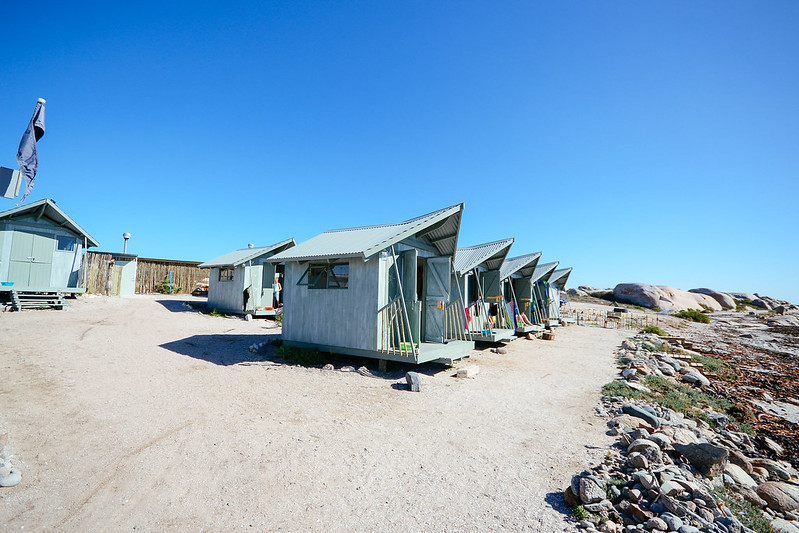 Now that the tents are gone, they’ve been replaced with seaside ‘shacks’. Rustic and all your need by the sea really.

[/cs_text][cs_text]Camping Gear:[/cs_text][cs_text]A few necessities you’ll need when heading out camping includes a tent, camping mattresses/stretchers, lighter, gas light and gas stove, portable power and solar panels ( in the case of no electricity), braai grid, camping chairs, insect repellents , first aid kit, Hot camp Shower ( if there aren’t any showers).Camping crockery, stove top coffee maker, headlamp and a plastic bags to take all your rubbish back with you. When camping in South Africa ( especially in remote places) pack clothing for all seasons, go in groups and inform someone where you’ll be and when you’ll be returning. [/cs_text][cs_text]Words by Lauren McShane. Photography by Vaughan and Lauren Manuel McShane. To read more articles in SAA’s inflight magazine, Sawubona, visit their website here: Sawubona[/cs_text][cs_text]What are some of your favourite camp sites in South Africa?[/cs_text][/cs_column][/cs_row][/cs_section]