You are here: Home / Travel / Tips for flying with a baby.
141
SHARES
FacebookTwitterStumbleuponBufferPinterestPocketGoogleWhatsapp
Mail

At the age of 6 months, our son was already embarking on his first flight- exciting for us all but daunting for me as I had to tackle the journey alone with him to visit Vaughan. Caleb has never been known to be chilled, quiet or still, so the thought of being trapped in an airplane ( albeit for only two hours) was slightly terrifying. His next flight a month later was around five hours to the island of Zanzibar but this time, we had many hands-my brother and parents came along with us so it proved way easier.

If you’ve never flown with your baby, it can leave you feeling rather anxious, but with the right preparation I think you can make the journey bearable- dare I even say enjoyable. Here are few of things that helped me when flying with my son( especially when travelling alone with him): 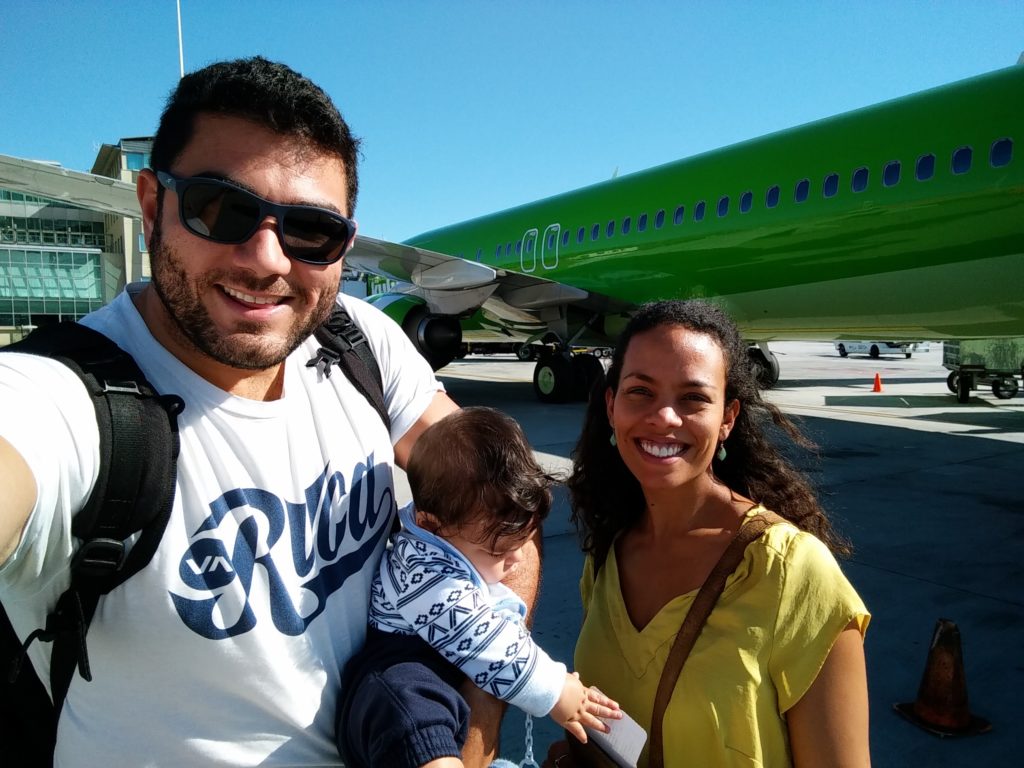 Off we go on Caleb’s first international flight.

I know that packing light with a baby is close to impossible, but make sure that you pack everything into your check-in luggage and carry only the bare necessities. With a baby, even ‘bare necessities’ means a few nappies, multiple changes of clothing ( just in case) as well as multiple distractions. The only bag I took on the plane with me was a single nappy bag which I crammed with everything I needed. There was barely space for anything of mine except for our travel documents, cards and jersey. Remember that at some point or many you’ll have to carry your baby unassisted so you can’t afford to have more than one bag with you. That brings me to my next point…

Since Caleb finally got used to being in a carrier and got used to falling asleep in it, it has been a saving grace for us. He is happy to be in it and best of all sleep on the go which is immensely helpful when you’re on the move, sans help and going through security or the bathroom. It was seriously the best money I’ve ever spent on a baby product and I can’t imagine travelling without one.

So I would suggest investing in a good one. When buying one, try it on first with your baby in it. Make sure that it doesn’t strain your back or neck ( in general depending on your baby’s weight, you’ll feel fatigue in these areas after awhile anyway) and fits comfortably as you may be wearing your baby for some time while travelling. I use the African Baby Carrier which allows your baby to face you on the front and be positioned on your back.

At the moment, we have an amazing pram. But it is bulkier than most prams and built with air-filled tyres for all types of terrain and really made for adventure. When travelling short-distance or alone, this is really not ideal so I decided to go pram-less on the first flight. But when flying to Zanzibar my parents bought a stroller that folds up quickly, is exceptionally light to push and works like charm whilst in transit and at your destination.

When flying with a stroller, check what the policy is with your airline. Usually you can push your baby in it all the way until the plane, where the ground staff will take it and you will receive it again when you disembark. Whether I was moving at pace through the airport or strolling around the resort with Caleb, the stroller really came in handy. 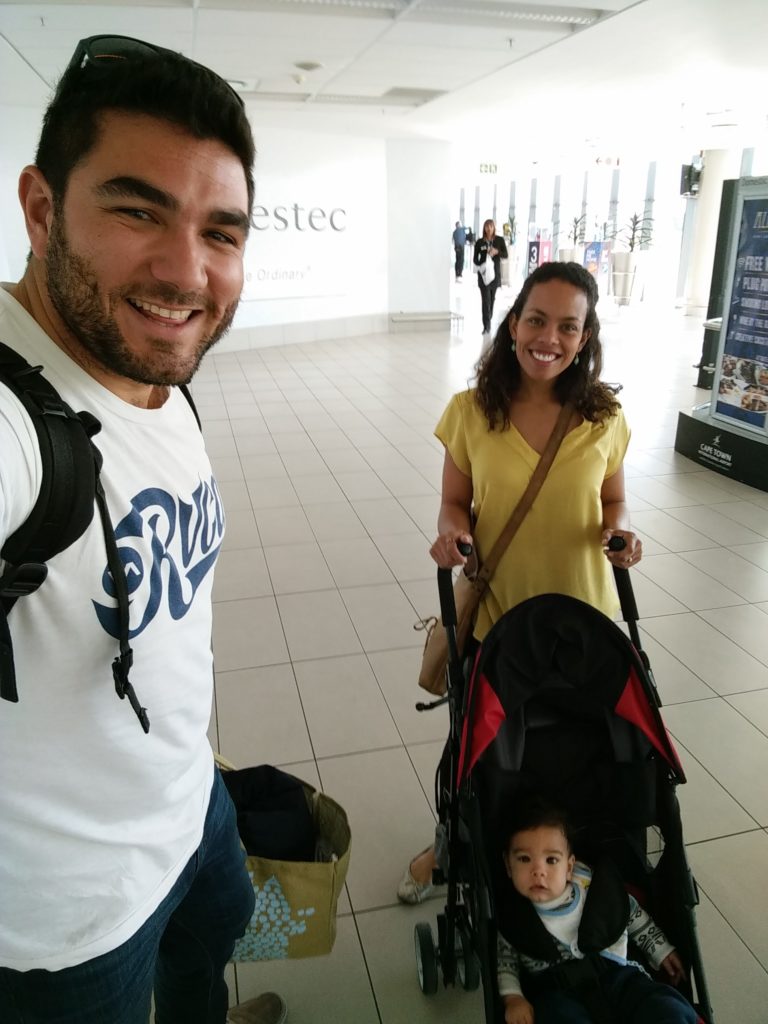 Sadly not for you-your entertainment is trying to keep your baby occupied or attempting in every way possible to put them to sleep. Try take one or two new toys with so your bub is not bored with the old ones. My son gets bored of toys very quickly and is best occupied by smiling and ‘chatting’ to nearby passengers. I brought my Macbook Air with me in the nappy bag so when he started to lose it, I can play some baby einstein videos. This made my bag a lot heavier and he watched for less than 10 minutes before moving onto something else. He was also teething, so the toys and objects that worked best were those he could chew. If your baby is anything like mine, he will want to chew everything that is not a teether. 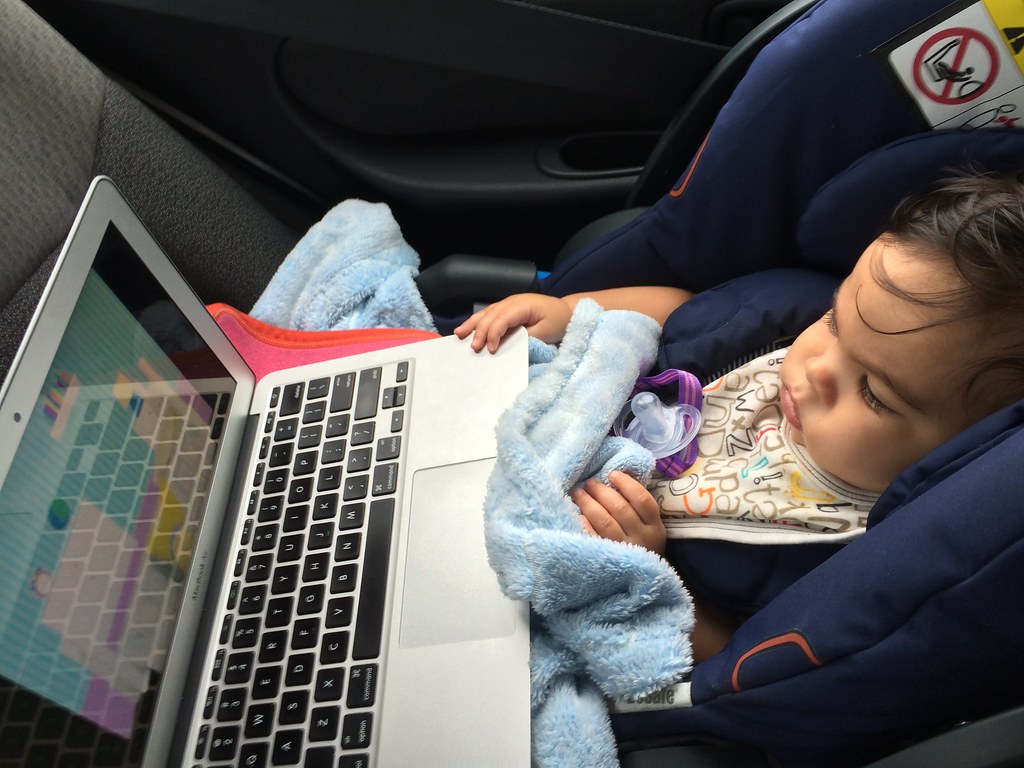 Caleb enjoyed a few minutes of Baby Einstein in the car and on the plane. 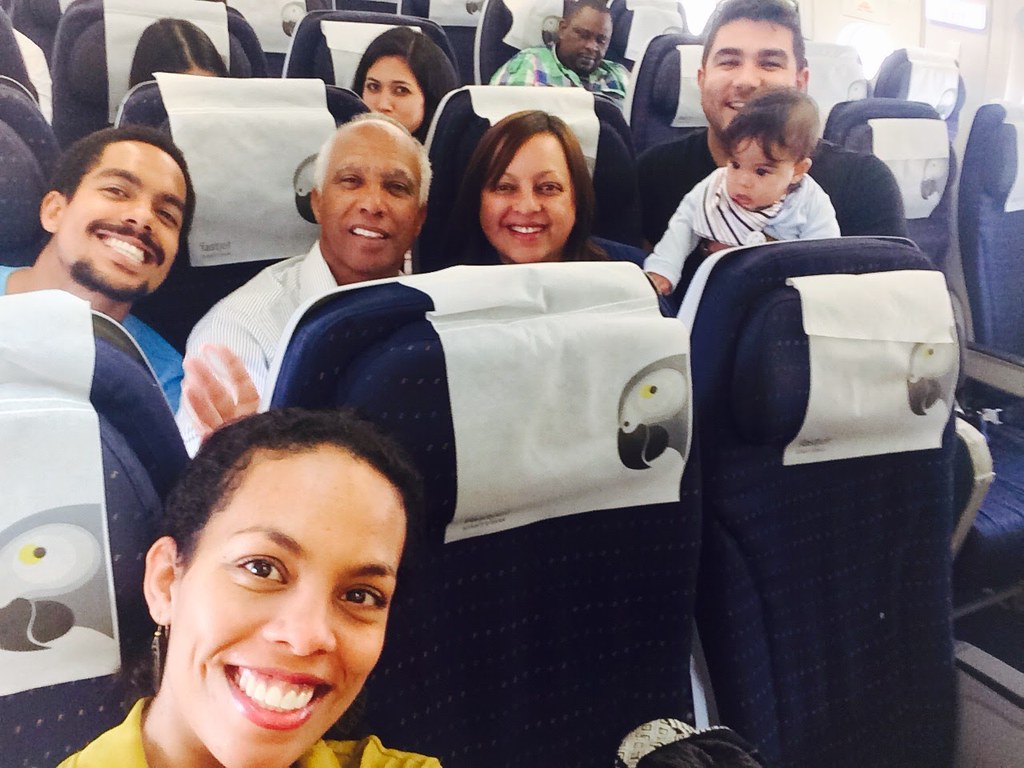 Bring babysitters. Many hands make light work during a flight.

I now look upon childless passengers with their travel pillows and think, “What the heck are those for?”. Long gone are the days when I would travel with a neck pillow ( sometimes even my own pillow on long flights), whip out a blanket, pop a sleeping pill and sprawl across three empty seats for the duration of a long flight. On both flights, Caleb was in the throes of teething and his teething syrup sometimes helped him sleep ( but not always).

I also found breastfeeding to be a great tool while on the go and after a feed he would pop off for a nap. On long distance flights I would recommend finding sleeping aids ( natural or not) for your bub especially if they are not good sleepers or can’t sleep easily in new environments. Nothing could traumatise you more than having a screaming baby on a 9 hour flight and no way of comforting them. Chat to your doctor about they recommend to aid babies sleeping and be sure to test it before you fly as some medications could make your child more hyper.

If the air hostesses are worth their weight in gold, they will ask you if you’ve flown before and advise you to either feed your baby or make sure they are sucking a dummy or something during take-off to relieve pressure and to avoid their ears getting sore. Some people advise on doing so during descend too but I haven’t done so and Caleb has been fine. I always try to keep a feed until take off and breastfeed then which has worked like charm, but when the timing didn’t work out, I forced him to suck his dummy which was just as good.

7. Make friends with the air hostesses.

Sadly not all airlines have friendly or obliging air hostesses who take interest in you or your baby, but if you get lucky and the air hostesses chat to your baby and ask about them, jump at the chance to make conversation and make friends. When your baby is getting niggly or needs some tummy time later in the flight, you can always go hang out in the back and let them relax on the seat whilst the air hostesses are busy. Even better is that when things go pear and you need space to rock/bounce/walk or shush your bub into a slumber, they’ll be there with sympathetic eyes and asking if you need any assistance or some room to move around. 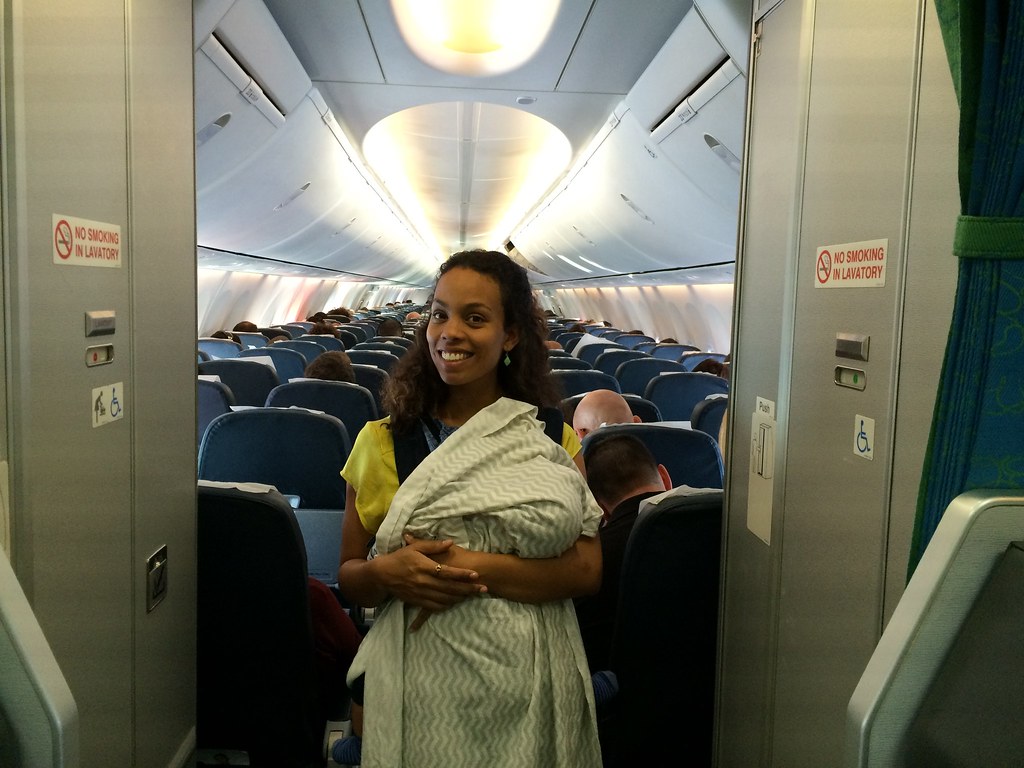 Finding sanctuary at the back of the airplane.

Have you flown with your baby? What are some of the things that helped you make it through?

Our flight to Zanzibar was sponsored by Fastjet, a low-cost carrier in Southern Africa. With really affordable rates, you can get to places like Zanzibar or Victoria Falls without breaking the bank. 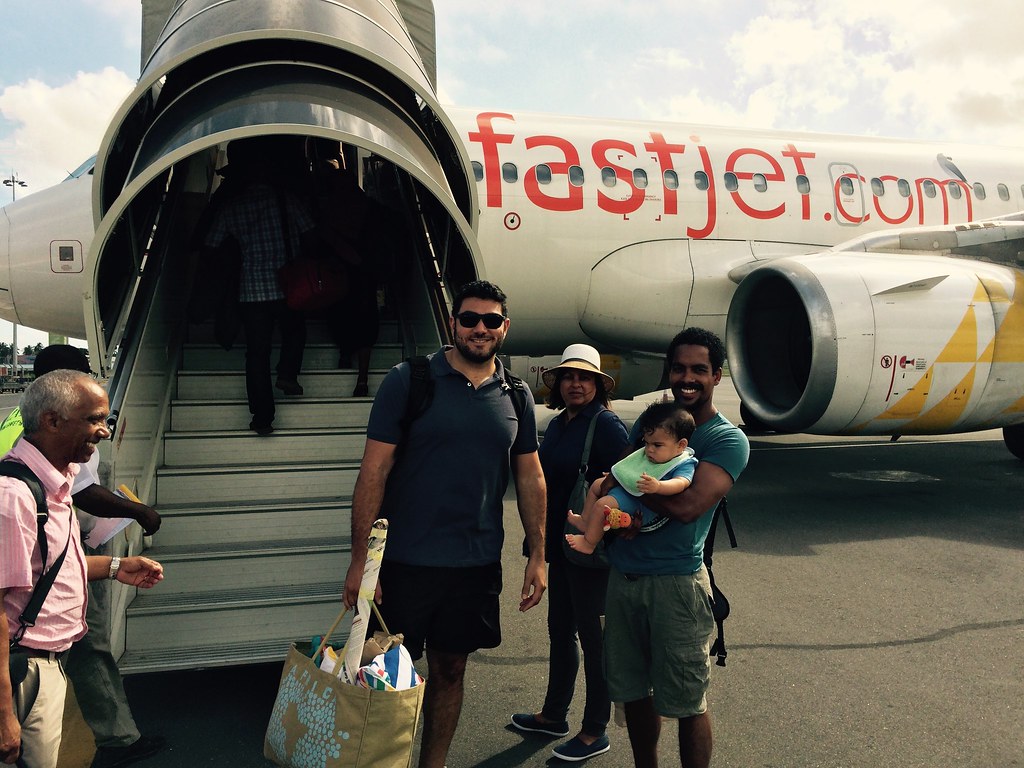 On our way back from Zanzibar.