We were the only four people standing on top of the boat. Surrounded by dozens of islands, we looked ahead to a beach with green peaks which seemed a few meters away. Our boat was anchored and there wasn’t a breath of wind in this sheltered portion of the sea. There wasn’t a sound other than a long-tail boat approaching in the distance. He took my hand, we counted to three and with that we jumped off the edge of the boat and fell into the ocean about 5m below. My heart lurched into my throat and we hit the water with a gigantic splash. I promised myself never to do that again. 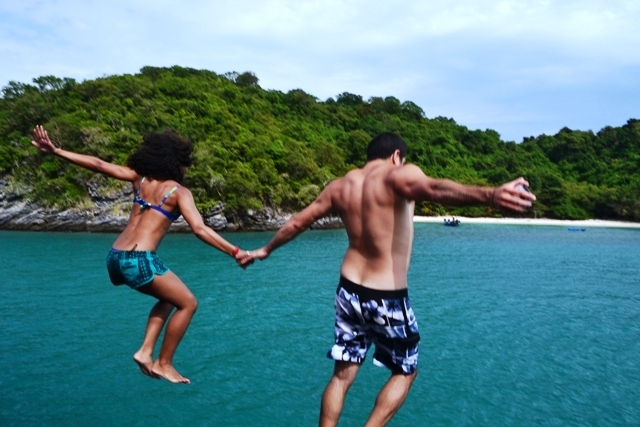 There was only one downside to visiting this archipelago of tropical islands which was Ang Thong National Marine Park and that was the amount of tourists we were forced to travel with. Only government- authorised boats are permitted to enter this reserve and as a result the only way you’re likely to visit it is alongside many others leaving Koh Samui. That’s where the downside ends; everything else is just a sight for sore eyes.

After an hour and a half travelling by a slow boat; limestone outcrops and peaked islands popped up before and around us. Once our ferry anchored, we went down into the hull to grab life jackets and jump on kayaks for our first leg of the trip. The tour guide paddled out in front with about twenty couples in tow. My eyes did not know where to focus. We, mostly my husband, paddled right beside limestone cliffs that hung over the emerald water. Layers of sediment looked as though they were painted onto the rock formations and I reached out to touch a piece of the island as we went by. We manoeuvred between giant rocks in the ocean and the island’s edge and turned left to move into the darkness of a cave. Shafts of sunlight crept into the hole and the water turned a deep jade in its absence. 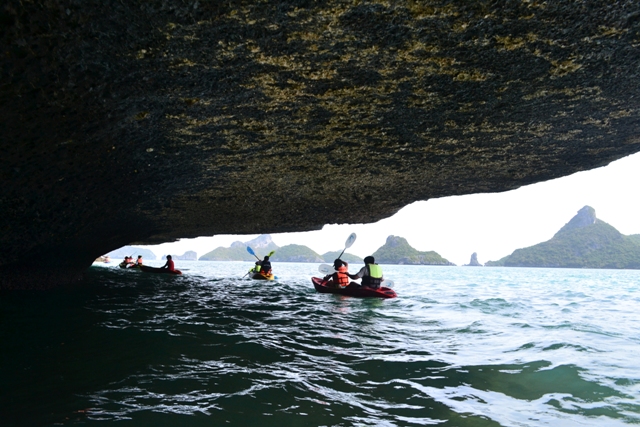 We waded slowly through a narrow passage and looked up to see stalatites hanging from the rocky roof. Suddenly brightness broke through in a passage of light leading down to our boat. I looked up to see an opening in the cave above with vegetation and trees growing on the outskirts. We pushed out into the daylight and continued to a deserted beach. This would be one of many tiny, uninhabited beaches we would pass by on kayaks. Aside from palm trees and some remnants that humans had actually visited, they were a castaway’s dream. If I were to be stranded on an island, I would pray that it would one such as these. 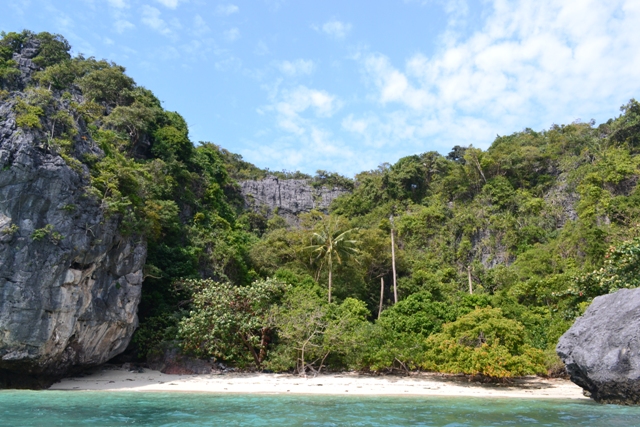 Our kayaking ended too soon and we were back on our ferry and making our way to Mae Koh Island, home to the Emerald Lake. I had seen photos, but nothing quite prepared me for what unfolded before my eyes as I finally reached the top of the steep stairway. I was sweating profusely by the time I reached the viewpoint and wished I had taken in dip in the turquoise ocean before I attempted this climb. I peered over the viewpoint into the island centre and that’s when I saw it. 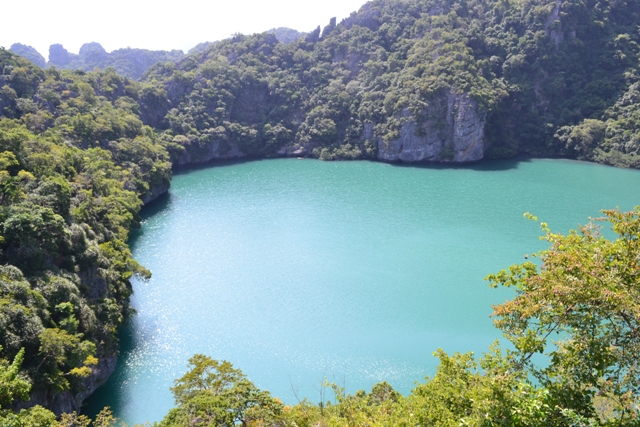 The mountains protectively encircled a body of water. The salty emerald water was untouched by wind and resembled a sea-green mirror. On the other side, a myriad of green islands dotted the sea and appeared as an oasis for those who once searched for land. I walked down the stairs towards it and stood on a platform right above its surface. I could see directly through it and saw black eel-like fish swim near a rock and deep purple urchins warding off predators with their spikes. Back on the beach, there was just time to sip a watermelon shake and look out past a row of stranded red, green and yellow kayaks before it was time to go again. 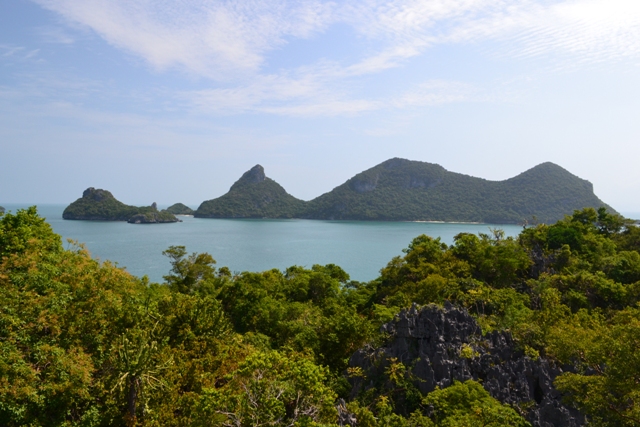 We kayaked once more to Wua Talap Island, headquarters of the National Park where bungalows and tents could be rented for the night. The museum informed us that Finless Porpoises, Dusky Langurs, Pied Hornbills and Bryde’s whales could be found in and around the park. Armed with goggles and snorkel, we dived into the water. It’s a pity that such a tiny square was cordoned off for snorkelling. Aside from swaying algae trees and a few fish, there was nothing much to see. When we had nearly given up on seeing anything, I saw a school of black and yellow striped fish swimming past me. Black and grey fish also wondered close to the algae and that was it. I wished that we had been able to snorkel just off the boat deeper in the ocean; I had no doubt that we would have seen way more. 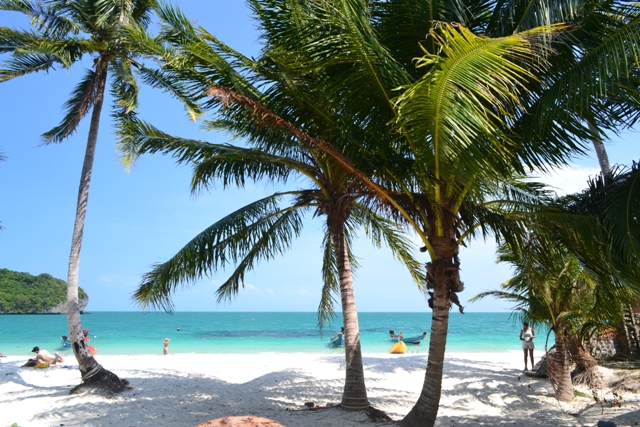 Some of the best corners of the earth are exactly that because humans have treaded there lightly or hardly at all. They are places which we have chosen to preserve where nature can take its course untainted by people. Ang Thong National Marine Park with its 42 islands, tropical vegetation and picture perfect beaches is without a doubt one of those places. My only hope is that visitors are kept to a minimum with less developing and more preserving.

To watch our video of all the day’s action,click here: The Beach 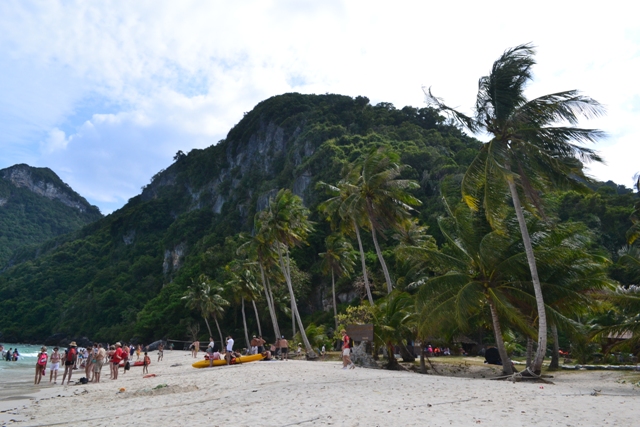 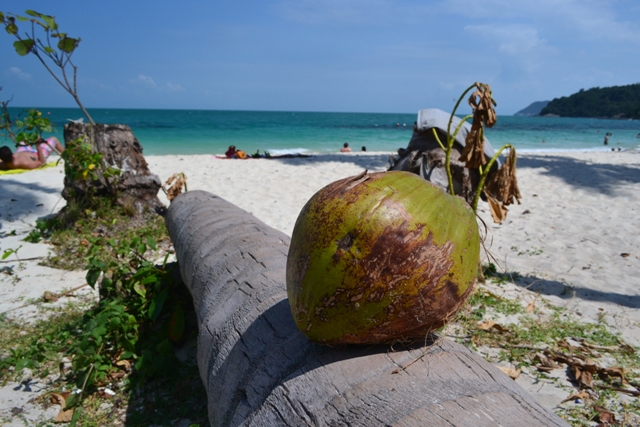 Most people dream of being stranded here. 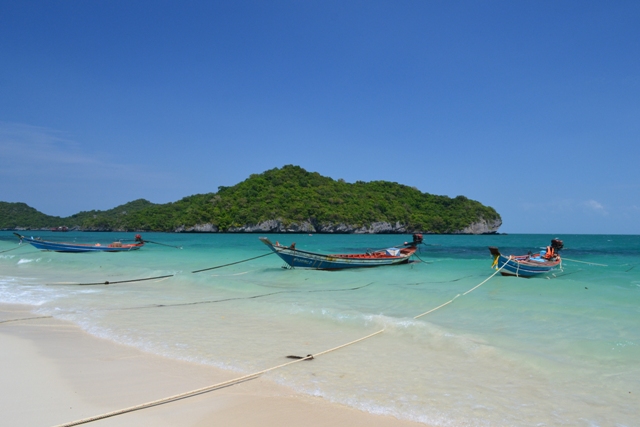 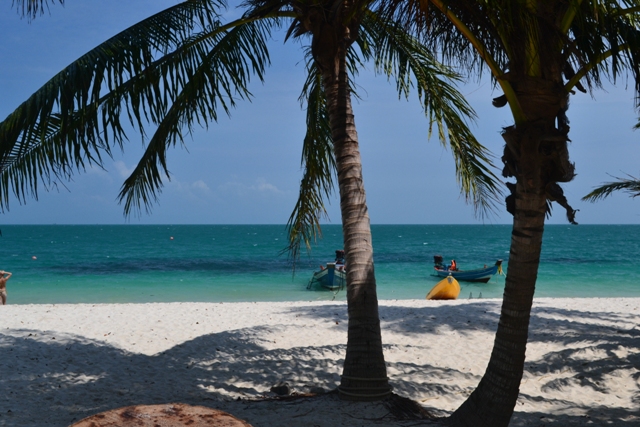 Under the shade of coconut trees. 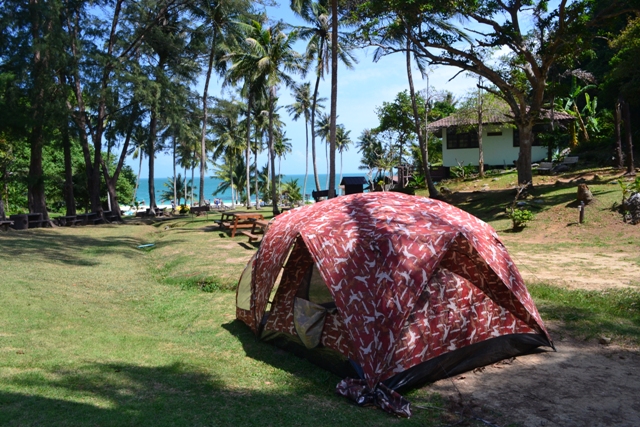 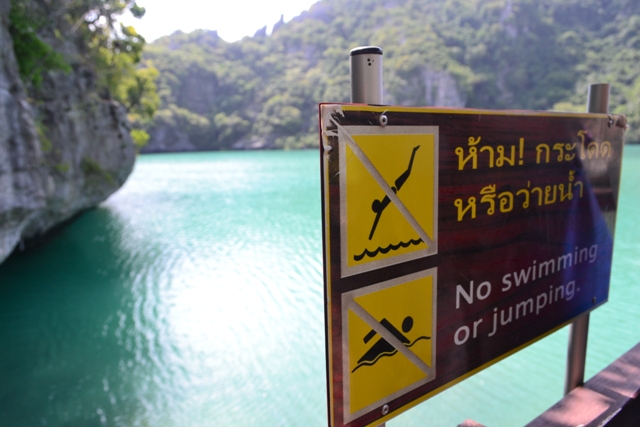 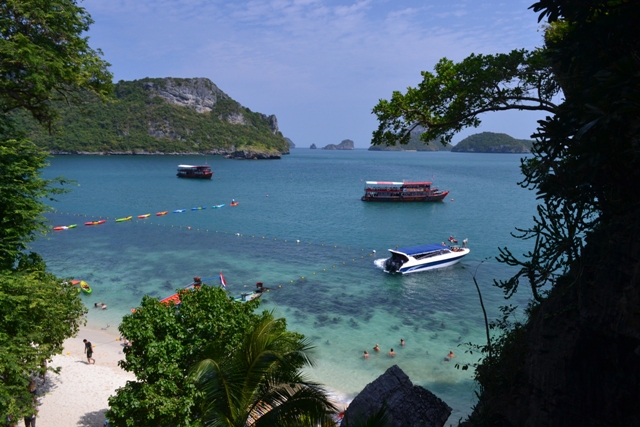 A myriad of islands to see from the viewpoint Mae Koh Island. 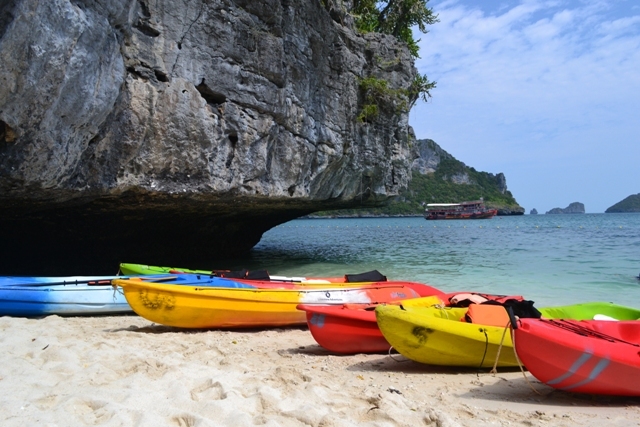 Time for a break from kayaking. 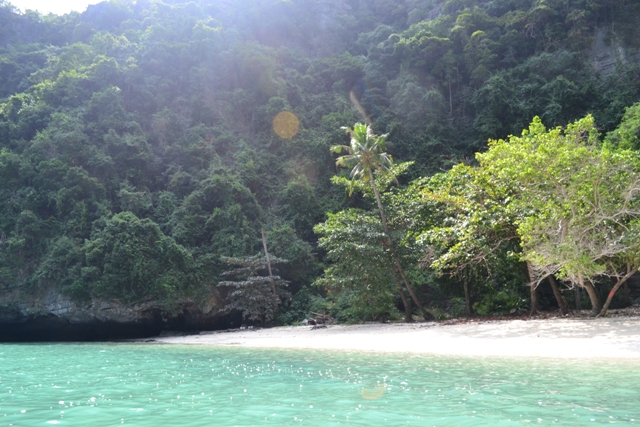 Sunshine on the water. 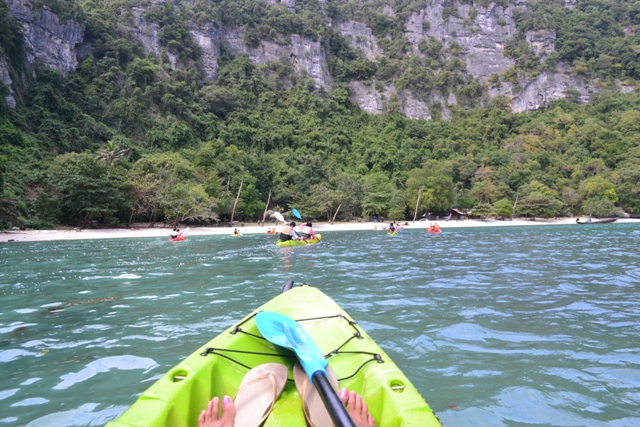 First beach we passed whilst kayaking. 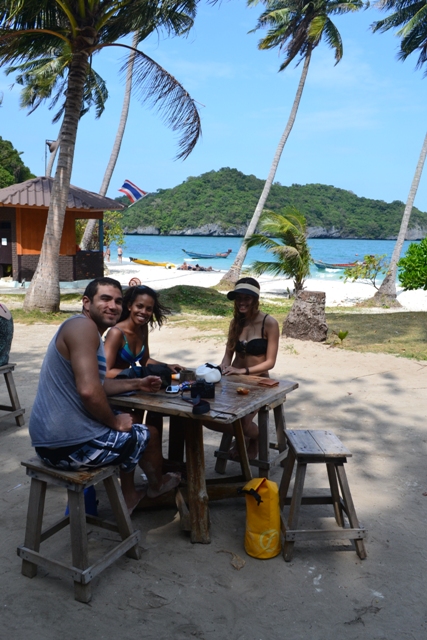 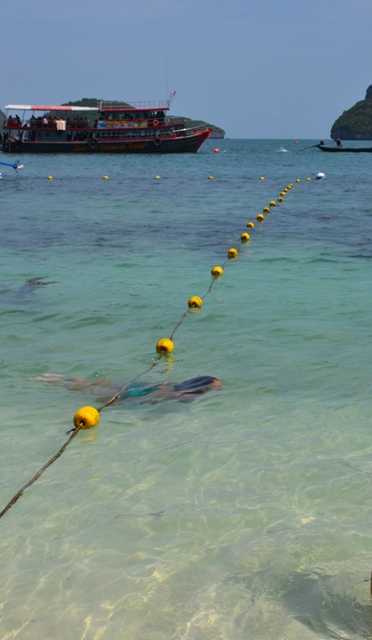 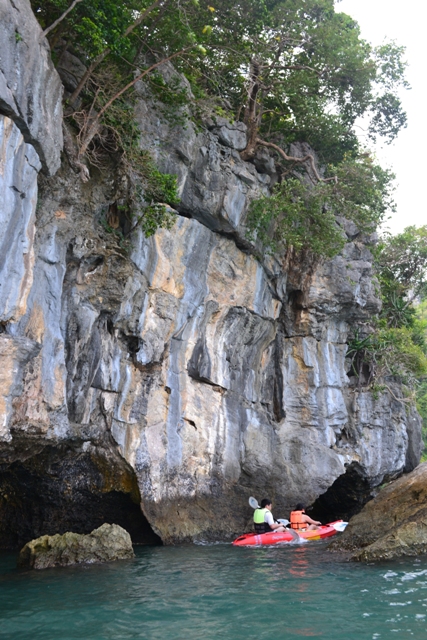 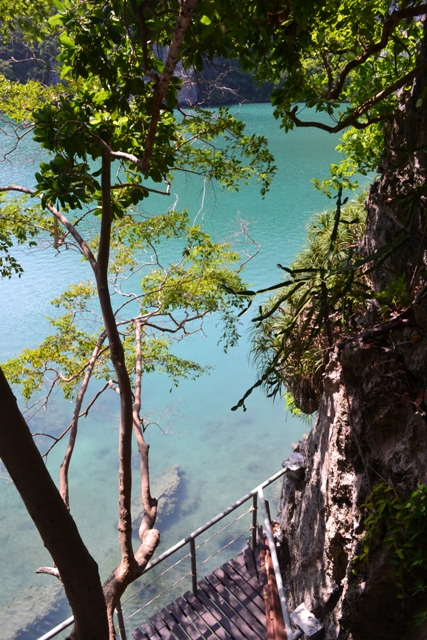 Peering through the trees into Emerald Lake.