It’s not often that you step into a unknown world so close to home.  An open space of bright green, streams rolling beside big, old trees and bridges over soothing-sounding waterfalls.  I recall playing here with friends when I was younger and still had sleepovers, played hide and seek and explored as if pioneering a discovery expedition.  That seemed like such a long time ago, but it all came back to me as I hopped off the scooter, left the tarmac and ventured onto the gravel path of the Alphen trail. 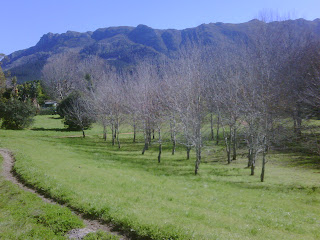 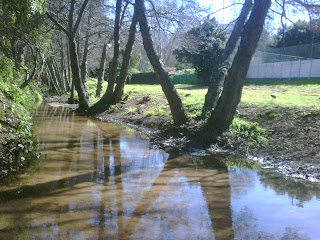 After passing walkers with their dogs, children, prams and conversation, I felt as though I had disappeared into another world.  A world with secret moss-covered gates beckoning you to leave the beaten trail, new fern shoots amongst the wooden logs, lilies growing wildly and freely beside the river and horses munching  hay on the other side of the wire fence.

Two swings made of rope hung from a tree’s top branch over the river.  I wondered how that Dad had braved the climb to fasten it there.  The swings hung in lonely fashion, perhaps in wait of summer when kids and others dare to swing on it, land in the shallow water below and dry off in the sun. 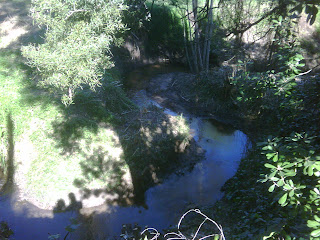 We stood admiring the shape the river took.  At times, it formed a perfect S and further down it was almost fully obscured by the foliage. Out of nowhere, a thick pipe ran across the river. Being the risk-averse person I tend to be, I stood and watched as Vaughan tested his balance walking across the slippery pipe.  The shadow of a giant tree fell on the grass in the shape of a wide mushroom. 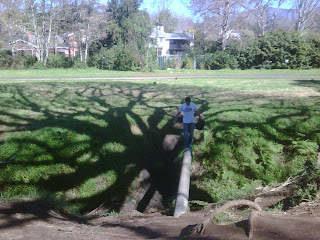 It still amazes that in the heart of the city, so close to my home, I can wander off along my own ‘yellow brick road’, where the only sounds you’ll hear are those of gentle waterfalls, birds ushering in the Spring, wind rustling through the trees and your feet crunching the carpet of leaves. And the lawns were trimmed so well, I actually discussed with Vaughan how they managed to make it look that well. Our conclusion was that they probably used one of these machines.