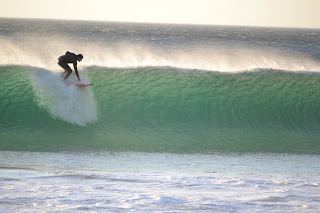 I had been to Noordhoek beach once upon a time.  In the heat of the day, with friends we jumped in the sand and pretended that we might chance getting our toes numbed in the frozen ocean.  But never before had I turned the corner and seen such a scene unfold. 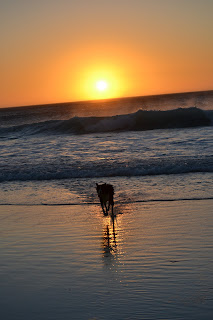 This time it was evening and the sun was promising to dip low very soon.  But in the meantime, scattered people walked in the wind, dogs chased seagulls and I was thankful I made the spontaneous decision to come to the beach on this beautiful evening to shoot surfers.
Pulling the hoodie over my head , I made my way around the mountain.  As the guys tentively made their way into the icy water, I perched on a rock with a perfect view over the wall of waves and the boulders decorating the mountain’s bottom.  A zigzag photographer chilled behind his tripod with a lens the length of my torso and a foreigner clicked away on his compact. 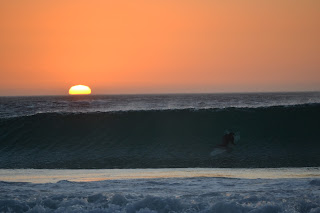 The turquoise hue the waves become upon breaking hold my gave for ages.  Once I took my eye off the colours, I felt anticipation each time they paddled for a wave and relieved that it wasn’t me having to duck beneath the crashing barrel each time.
I silently giggled happily with every wave they caught and every second they hovered on the wave’s lip.  The young locals sliced through the waves in the deepest part of the ‘hoek’ until the sun started to descend.  I found fascination in a seagull who seemed stuck or content on this single rock.
As the sky became smudged in pink behind me and fiery red before me, the surfers seemed adamant to catch as many waves before the light disappeared.  A surfer padded in black, brushed his hand on the inside of a barreling wave.  I could only imagine the exhiliration he felt. 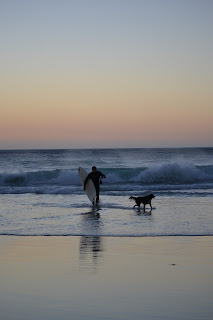 There was one last wave to be caught just as the red ball hung above the horizon.  The seagull tired from teasing the dog, the surfers got cold and families begun moving back to their cars.  Didn’t realise just how much fun I could have watching the waves, not surfing and only capturing.