Recently I wrote about some exciting activities (plus some other things) to do in Dubai and I also mentioned right in the beginning of that post that the reason I was in Dubai was for a media trip, sponsored by Emirates Airlines. Because it was such a lengthy post I neglected to write about anything to do with our host company. To be honest it worked out very well because 1) now we get to give you a sneak peek into a behind the scenes look at Emirates and 2) the airline, as you’ll see, actually deserve their own dedicated article on our site.

*NOTE: Skyclub.com is a good place to find business class flight upgrades at a great price*

So let’s start with those Business Class flights shall we? 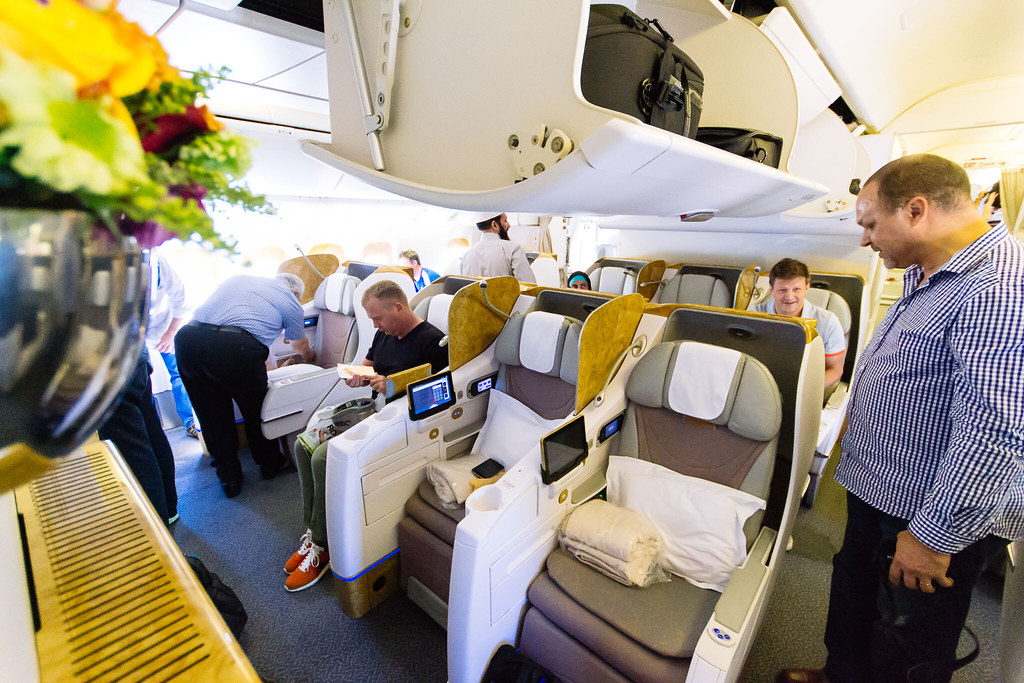 Business class seats. All that space! If you look carefully you’ll see Bobby Skinstad in this pic!

This seems like a silly thing to say, but if you’re headed to Dubai, you really should fly Emirates. I gained a huge amount of respect for the cabin crew (and the airline as a whole) during my tour of their cabin crew training college. So if, in my previous post, I’ve convinced you that Dubai is worth a visit, fly Emirates. And if you can, fly BUSINESS CLASS.

I flew business class from Cape Town to Dubai and it was better than I could have ever imagined. I’m talking real glasses to drink from (champagne, wine, juice, spritzers & pretty much anything you can imagine,) three course meals served atop proper crockery, an electronically operated seat that reclines to any desired position at the touch of a button (do I really need to go on?)

I’m talking about screens so large that you could be watching from home and hostess’ so accommodating, friendly and genuinely funny that you’ll probably leave the plane as friends.

As if a comfortable seat that reclines fully into a bed wasn’t enough, Emirates also provide plush mattresses to add extra comfort to your nights sleep and of course, there are the little vanity cases that contain a range of Bvlgari products so that you leave the flight smelling great and feeling fresh. 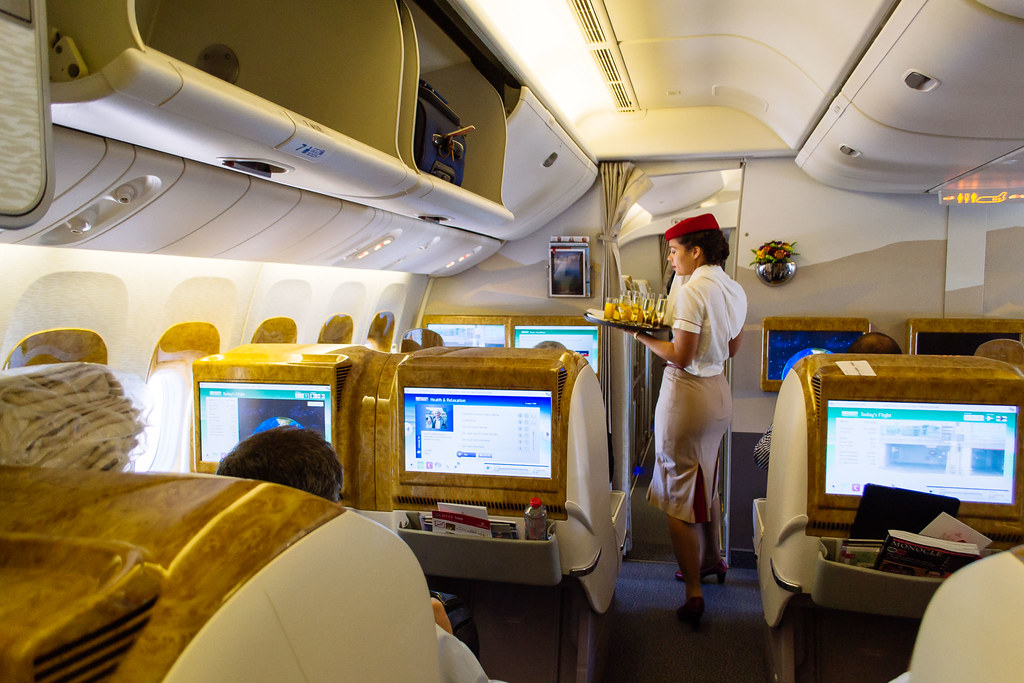 There are too many details to write about here, but a business class flight on Emirates is something that everyone should experience at least once in their lives.

So if you can’t afford it (like me) and you aren’t media (like I am) then you should join the Emirates Skywards programme and in that way, you can get the opportunity to get upgraded to the class where they serve little Belgium chocolates in a box. After dessert.

Of course it’s also true (as has been pointed out by multiple friends) that once you fly business it’s SO much harder to enjoy scum class *ahem* I mean economy class again.

Emirates Flight Catering (Where they make all the food) 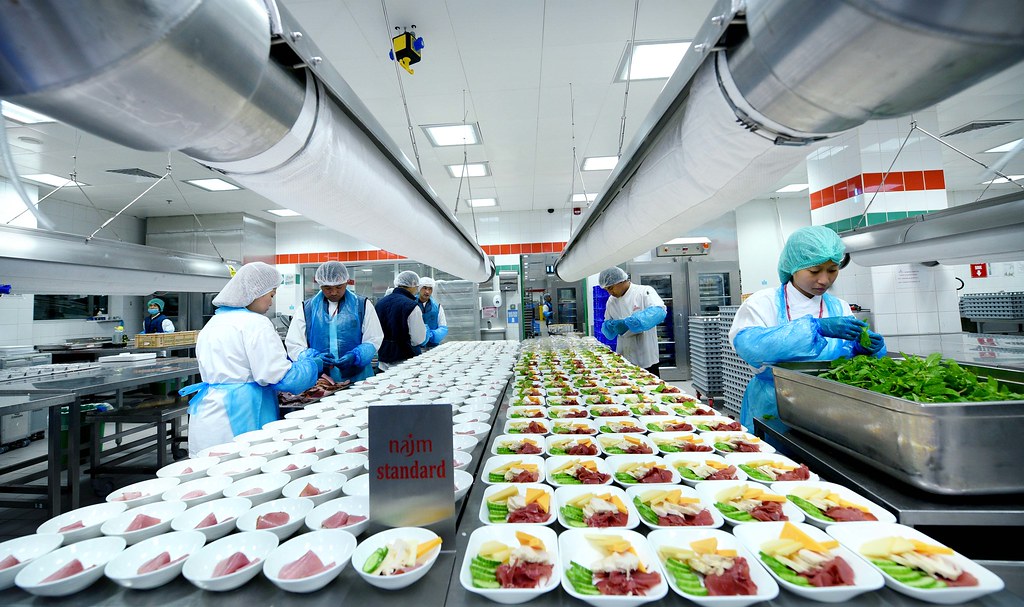 In what I thought a fairly risky move, Emirates decided to take us, a small collective of South African journalists, to where they prepare all the food for every single Emirates flight.

But I was wrong. It was genius!

I’m still blown away by the technology, the precision, the over-the-top health standards they employ and the sheer amount of food they make every day. In case you were wondering – Emirates make up to 160 000 flight meals every day. 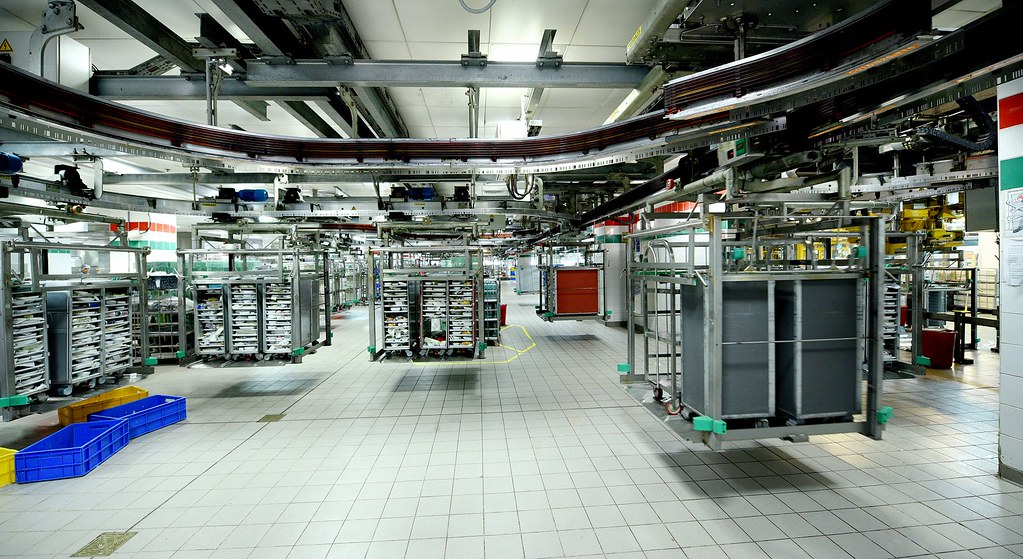 This system is taking the dishes from the planes to be cleaned.

Their catering facility is so big, it basically has it’s own postal code. A city of food really. I’m not going to bore you with the details (which I actually find fascinating) about how strict they are here, so i’ll just throw a few nuggets in. Like the fact that your food is so fresh that it is only loaded just six hours before you fly. This is an exceptional feat of freshness. And also, despite the horror stories we’ve all heard, the food is all real.

There is no hidden lab where they create food that lasts for months on end. They actually ship in tons of products everyday. I was in the store rooms. And I saw the food going through security checks (before being admitted to the facility) that were possibly more challenging than getting through a US airport wearing a turban. There was sampling, X raying, probing, you name it.

The food on your plate actually starts getting prepped 48 hours before your flight and by prepped I mean real prep work. There are no dodgy canned flavours here. The cheese they use comes in blocks so big that it takes a team of three to slice up! And the actual cooking is done 24 hours prior to flight followed by assembly and cooling and then loading, which as I said, takes place 6 hours before you fly. 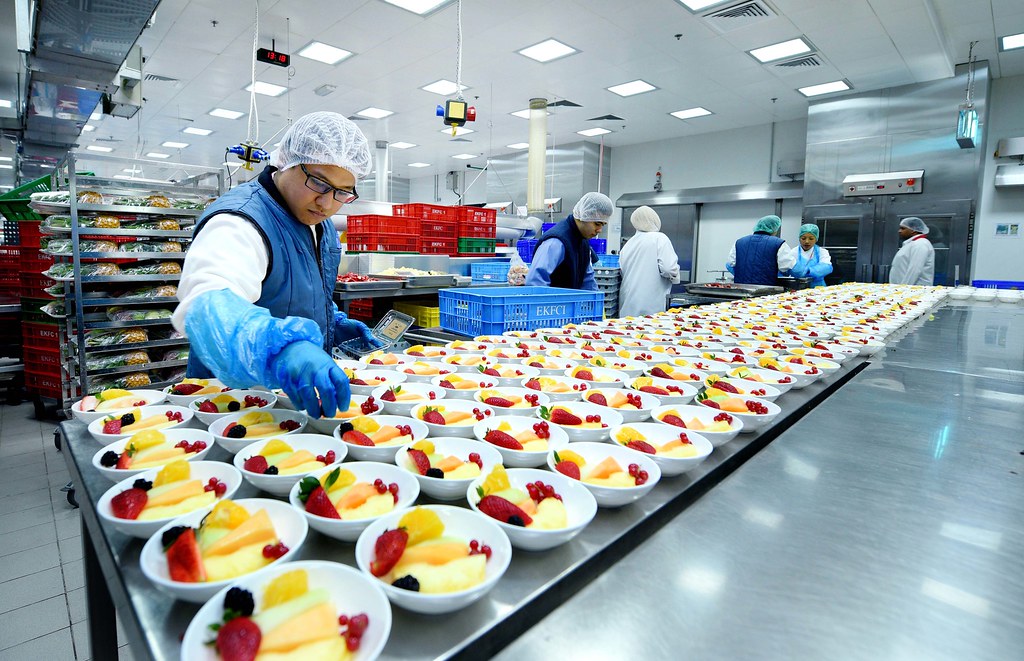 Fruit salad. One blue berry per person! (Must be economy) Hehe.

The fruit comes in those little plastic punnet things similar to what you find in Pick n Pay or Woolies. I was there when they were assembling fruit salads for more than 200 people. The smell was amazing. It’s real fruit.

It’s all real. I watched as they prepared the meat. It looked so good I wanted to eat it. But it was being prepared in what ultimately looked like a laboratory and I didn’t feel like spending the week in a Dubai prison. 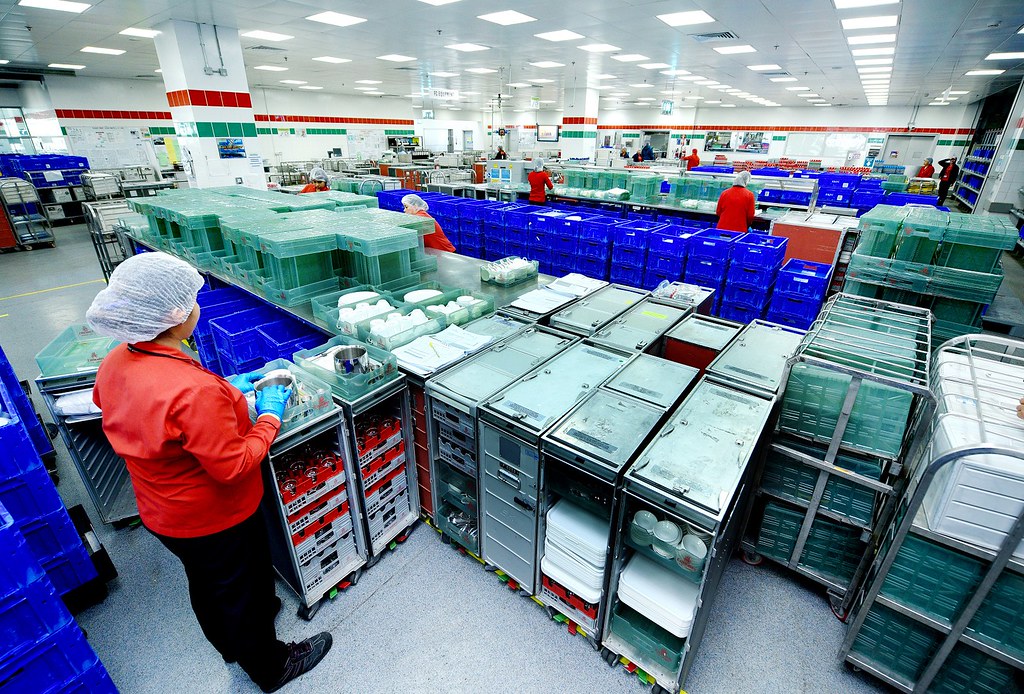 Stocking the loaders for the next flight.

I’m obviously no expert here but in my opinion, the attention to health, well, food safety standards are impeccable. We saw the state of the art system where every item gets washed. We saw the control centre where they keep an eye on the planes. We saw it all and ultimately I left feeling very impressed. And also very hungry. Which says a lot.

Emirates are building a replica facility right next door because this one is already operating slightly over capacity and they anticipate that in the coming years they will need much more. Much more than 160 000 meals every day that is. Mind boggling.

So treat your cabin crew nicely! You are definitely not the only person they need to serve! 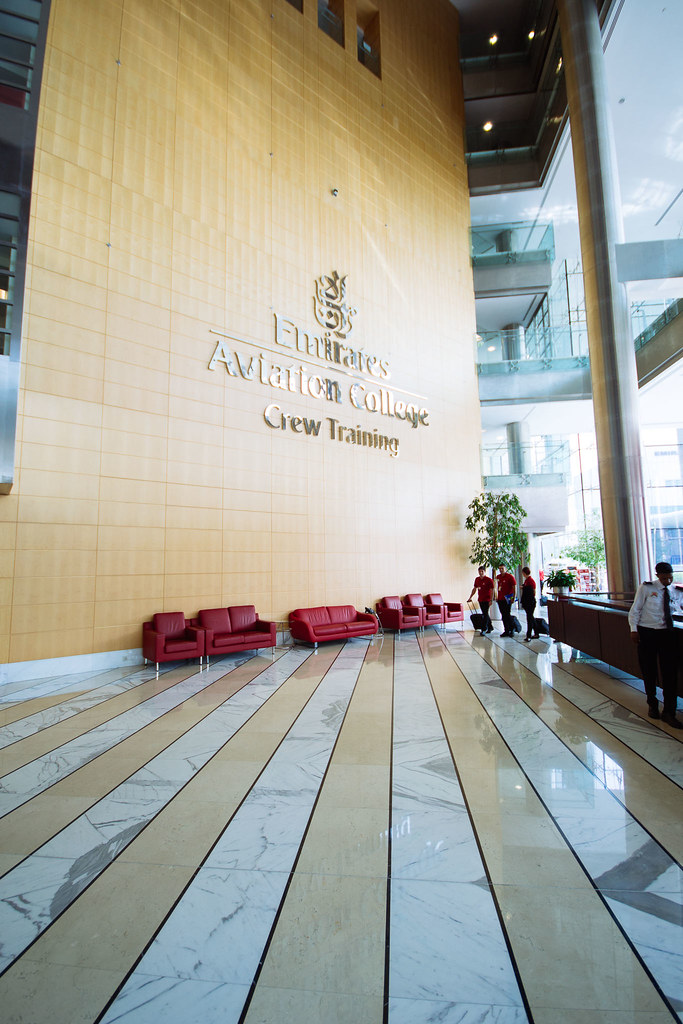 Every single cabin crew member employed by Emirates is trained in this facility.

It’s extremely impressive. The campus (because that’s what it is) is a world class training facility designed for taking potential crew and turning them into world class cabin crew. And from what we saw the testing process is anything but easy.

I think what stood out most here was the attention to detail. Working for Emirates takes on a whole new meaning when you look at where they train their staff. The attention to detail, the pride in their uniform. It’s like attending one of those prestigious schools (*ahem* like Wynberg Boys High School in Cape Town *ahem*,) you leave with a great education, a sense of pride in who you are and where you came from.

People can see it.

For example, have you ever noticed that in the female crews’ hard scarf, there are exactly seven pleats? They represent the seven emirates and the staff personally need to iron these in.

The next part of our tour took us into a model plane where the crew were training to level up from economy crew to business and first class cabin crew. It’s amazing that they built a full scale replica of their aircraft for this. 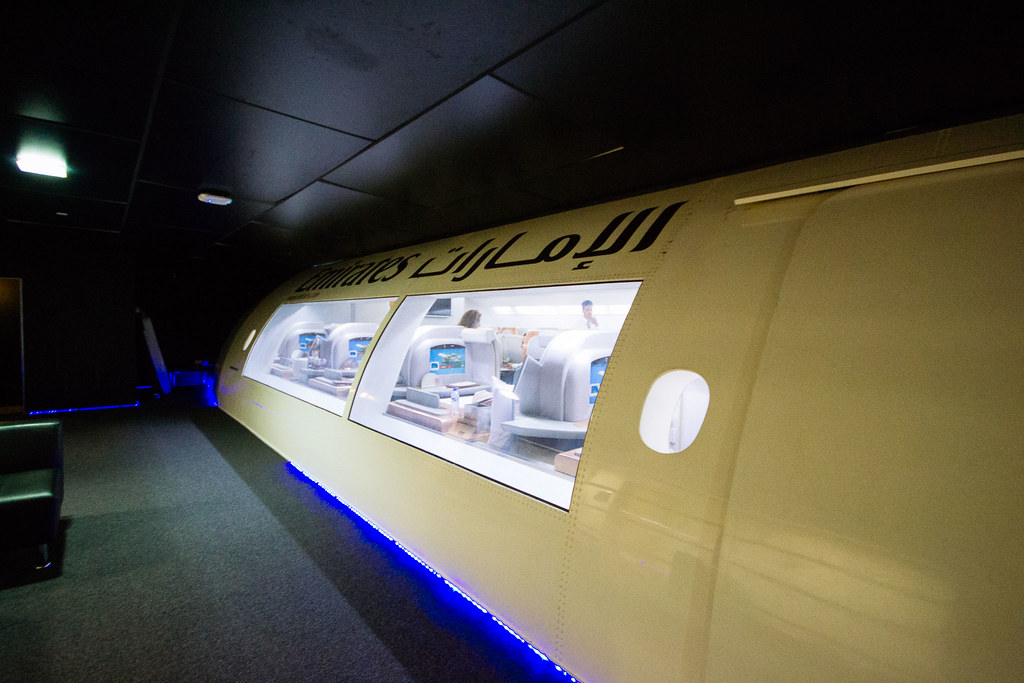 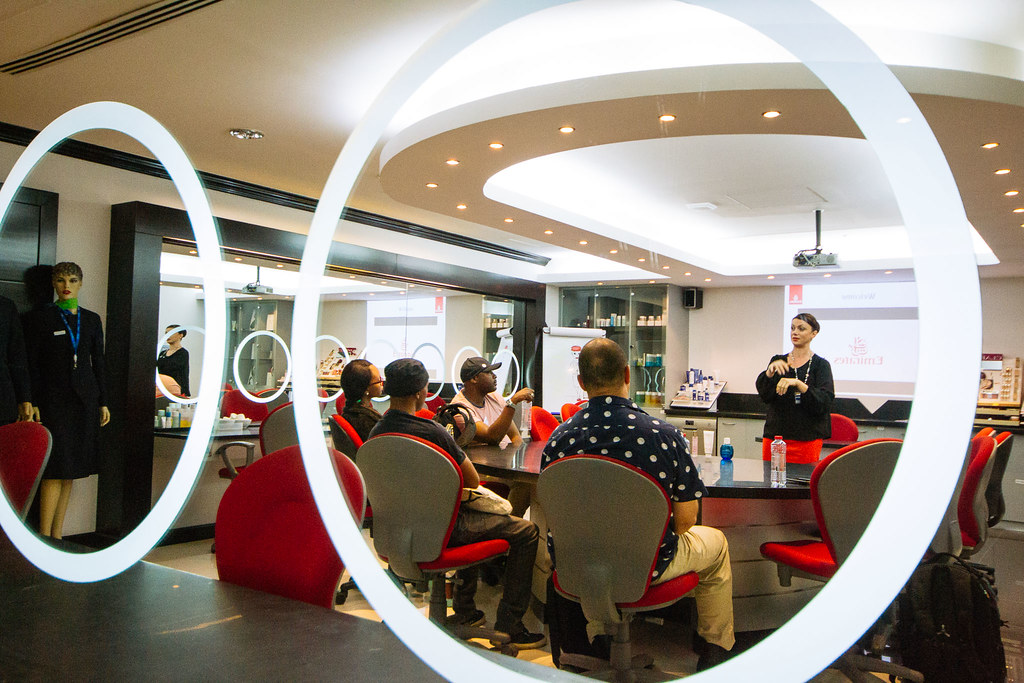 Learning about make up and styling.

The final part of our tour saw us head into the most impressive part. Full on flight simulators, water landing simulators and the general safety area.

It’s pretty spectacular. Overall I have to tell you that I left the building (and Dubai) with a huge amount of respect for Emirates Airlines. I don’t what I expected from an Airline facility but what I was met with was extremely impressive. 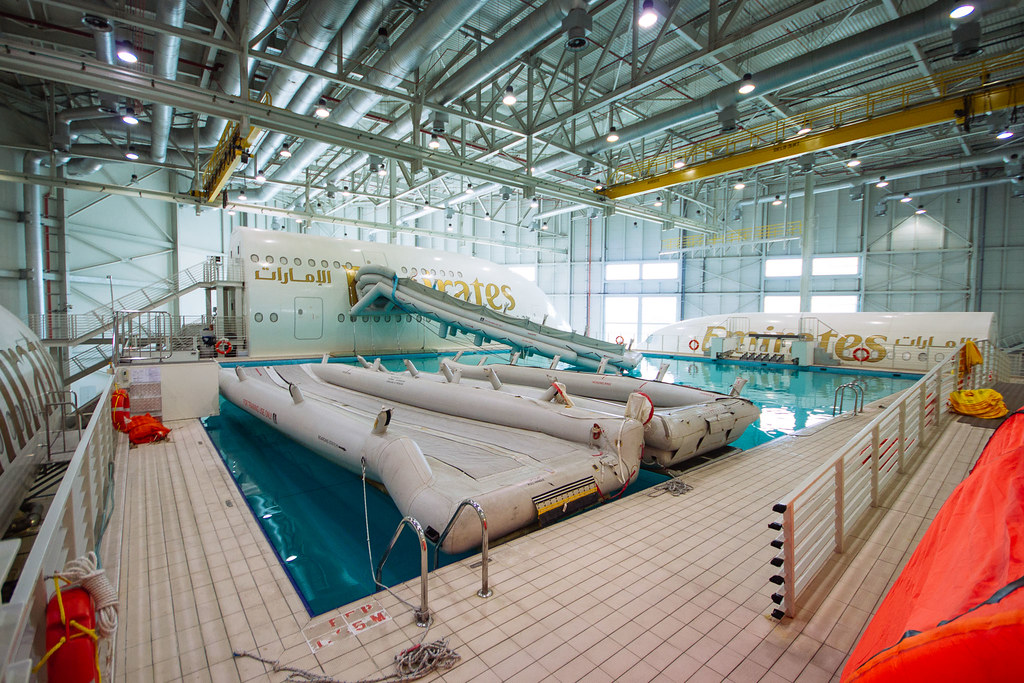 Thank you Emirates for inviting our travel blog to join this media trip. I think as constant travellers it is possible to take many aspects of flying for granted but after this trip I am reminded just how much hard work, commitment and dedication goes into something as “simple” as a flight between two corners of the earth. 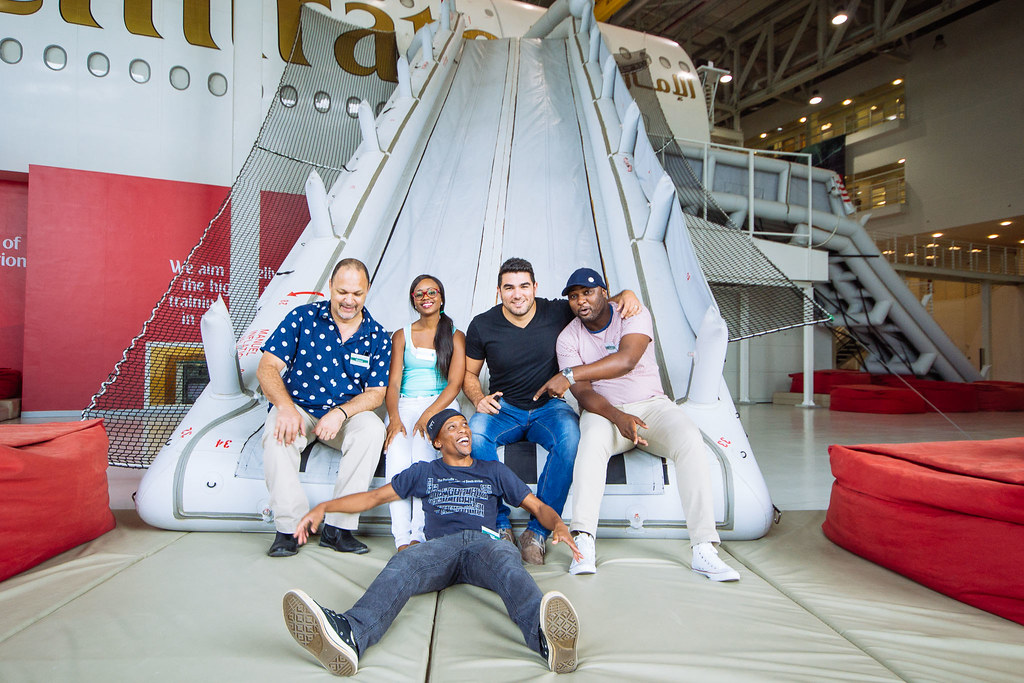