“There are two things you need to know about me,” said Warren Bradley, “I like to ride motorbikes, so you need to give me the space to do that and if you don’t cheat on me then that’s all good.” A bold sentence once uttered to his now fiancé, Elizabeth Ann Ross, on their first date. “It just happened. The minute I saw Lizzy, I knew I was going to marry her,” says sculptor Warren about the time he returned to Durban to find Elizabeth renting the cottage on his friend’s property. Sipping her tea, textile artist and illustrator Elizabeth laughs and tells me, “It was crazy. He said he was going to marry me on our first date and I was like, ok.” 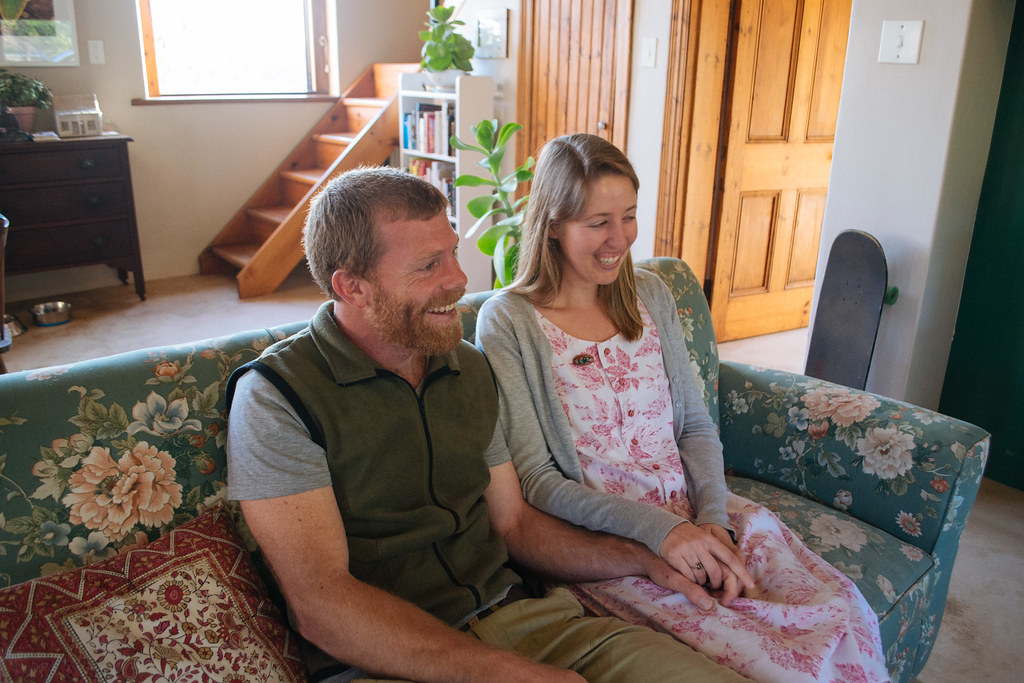 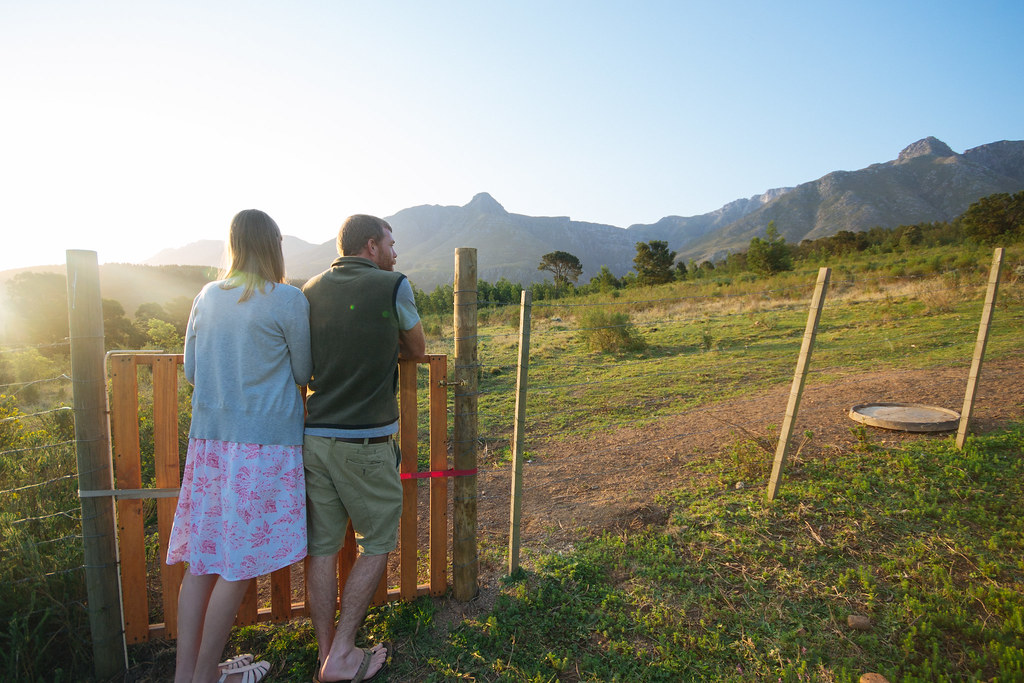 Far from city traffic and the Durban coastline, they now find themselves living on a National Heritage site in the way of farm named ‘Die Skooltije’ in Swellendam whilst sewing custom dolls and crafting wooden toys for children. Dating back to the 1900’s, their relaxed, modern home once functioned as a school until it was closed in 1940. As the kettle whistles once more for my cup of coffee, I peek over succulents, pink flowers and bowl of lemons out through the window and onto their vegetable garden where they grow their own food. As the lazy light of the day begins to fall on the dirt road leading up to their gate, Elizabeth tells me she’s always wanted to have her own business.

After studying graphic design, her mom insisted she find a job but after working in corporate agencies and delving into styling and photo shoots, she entertained the idea of either moving to Indonesia to surf, working with Elephants in the Okavango or going sailing. None of these travel plans came to fruition and for another two years, she returned to work in a big corporate company. “ The people were great to work with, but the office environment wasn’t for me. I was always feeling physically sick. My body was telling me I should stop and do something else. Plus I’d always want to start an online shop.” Here in the Hermitage Valley they get to spend their days creating amidst sunbirds, horses,their dog Frankie and tractor Ferguson. 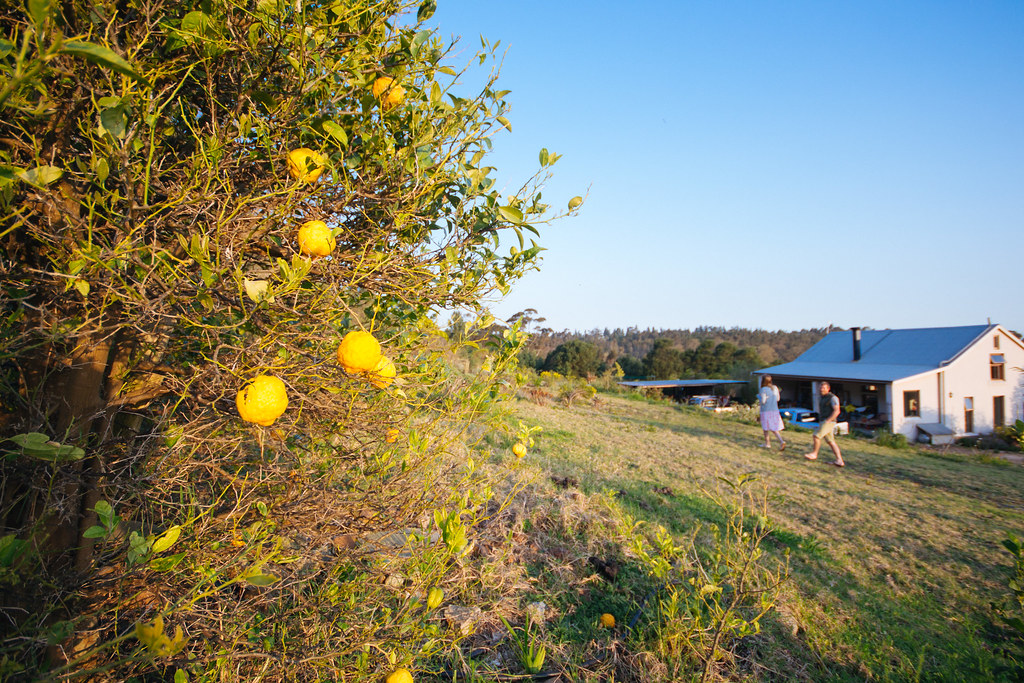 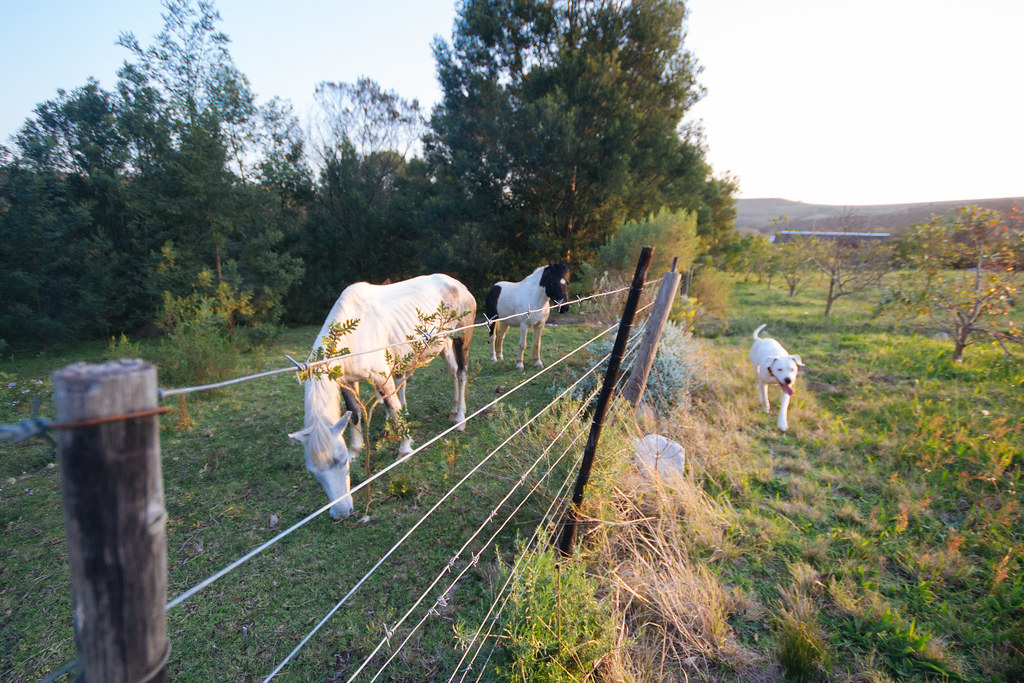 At around the same time Warren moved back to Durban awhile before his mom passed away and eventually found a workshop living upstairs and working downstairs. “I’d always worked with my hands,” comments Warren as he shows me the beautiful children’s wooden creations he’s made with rare woods. With ample experience building everything from custom furniture to a bed and breakfast on his family farm to fixing motorbikes and landscaping; it only made sense to continue making things with his hands.

He tells me that while they both love being creative, neither enjoy chasing money and they wanted to steer clear of the ‘Chinese Shop’ situation and instead create once-off toys. They soon realised this was an expensive exercise in itself but luckily with ample talent between the two of them, they work on freelance projects to help pay the bills.

Sitting in their light, open-plan house, I glance over at the surfboard hanging on a turquoise wall and Warren tells me that surfing is the only thing they miss about living here. Thankfully the ocean is only 40 minutes away. I finally get to lay eyes on the delicately detailed dolls Elizabeth embroiders and sews in her loft studio overlooking the Langeberg mountains. I instantly fall in love with The Photographer but find it tough trying to pick a favourite between The Whale protector, Gardener and The Swimmer dressed in a vintage bikini and wooden goggles. As I express my envy at the perfect work space and countryside home they have, Elizabeth tells me that the freelance life they now lead is not without struggles. 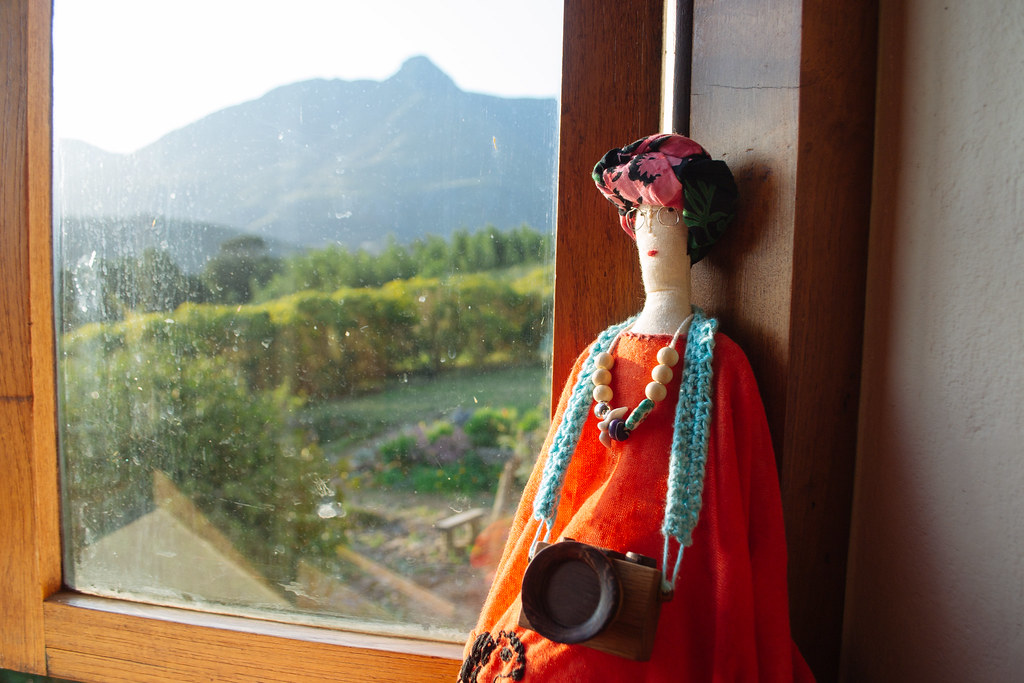 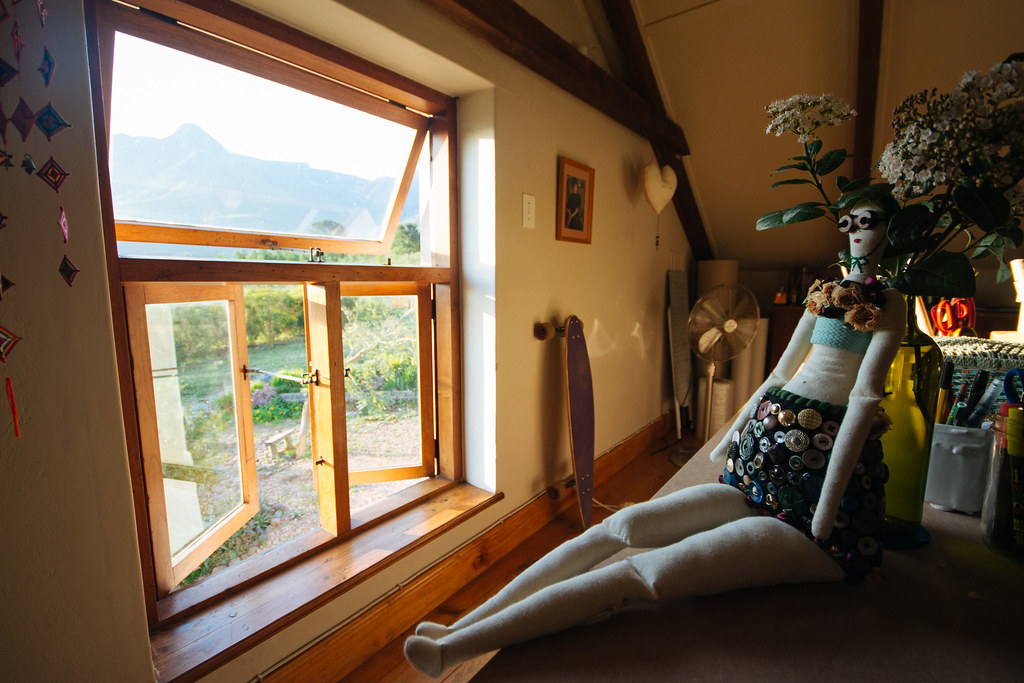 “On social media, everyone thinks you’re very successful, making so much money and just living the dream. When in reality we haven’t sold as much as we’d hoped, are eating our e-bucks and struggling”, says Elizabeth. “But we’re the happiest we’ve ever been. I’ve never felt this alive as we really have to find a ways to survive. Our struggles are real but totally worth it.” Smiling, she goes on to tell me about she gets to garden, weed, crochet and hang out with Frankie daily to get her creativity flowing. And here in the countryside, they never have a moment to get bored what with the snake catching, vegetable growing and tractor fixing.

My eyes scan the wealth of string instruments mounted on the wall above the piano as Warren tells me he collects and plays instruments. He studied music for one year, not to learn anything or do exams but to jam with fellow students. He shares about his love for solitude and the bush as well as his two-fold dream to be a subsistence farmer and to ride bikes. Whilst subsistence farming didn’t pan out, he has been riding bikes since he was three years old and has worked as a motorbike mechanical his uncle’s shop , built tracks and led month long bike tours across the country. 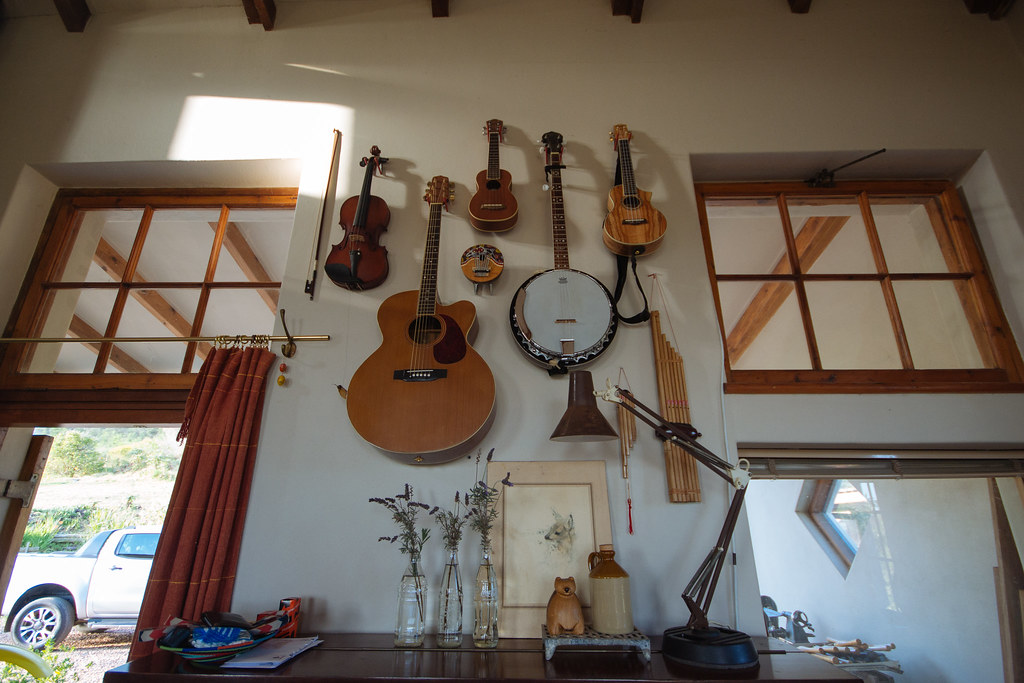 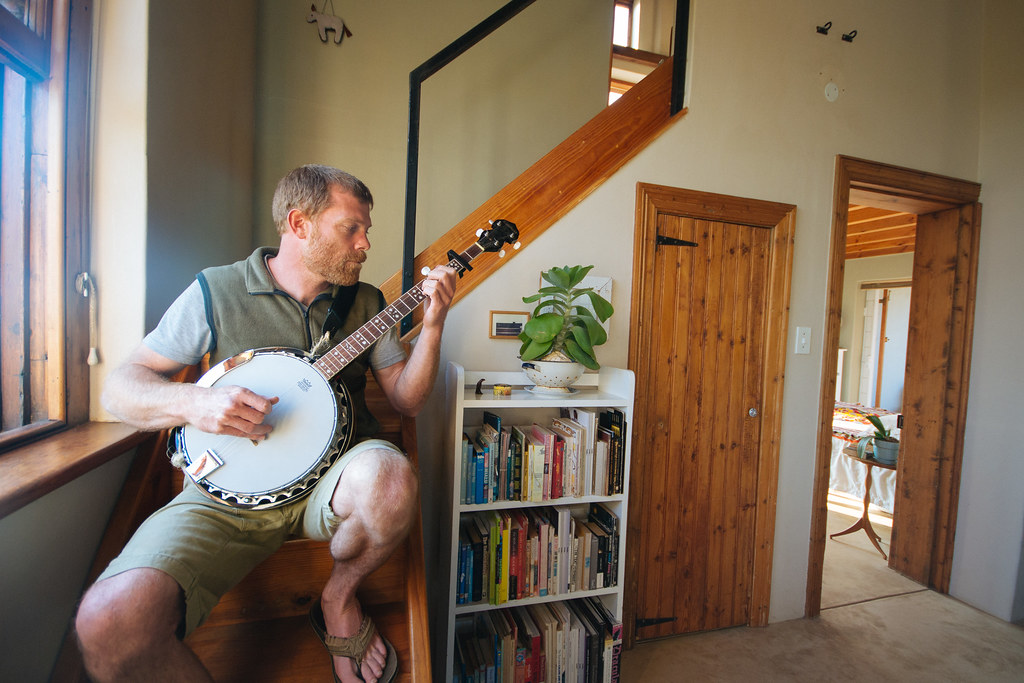 It seems he’s done everything from starting a nursery, growing plants and landscape photography but the one thing he describes as his dream job was a wilderness guide in Imfolozi, Kwa-zulu Natal. “I was so fortunate to do that. It was my dream job. Once you do that, you’ll never look at the bush in the same way. You sleep on a rock, get chased by lions, rhinos and elephants and it’s a very personal hand-on experience.”

As the sun begins to surrender over Swellendam and the horses grazing on the neighbouring farm, we walk up to the little dam on the hill. Frankie excitedly leads us beneath the trees to the kayak pulled fun rom the water whilst Warren explains that it was always his mom’s dream to leave some money for him and his brother. Once he’d decided with Elizabeth that it was time to find a place to live they began scouting online to find countryside homes in random locations around the country.

“We started a road trip to find a place where we really wanted to live. It was actually the weekend when Warren planned to officially propose to me on a hot air balloon in the Drakensberg,” giggles Elizabeth. “Typical me, I decided at the last minute to tell him we were no longer going to the Drakensberg but to find a house on the coast in Cape Town. He asked if I was really sure I wanted to do that,” says Elizabeth. Glancing over the dam and down over the place they now call home, Warren explains he was happy to do whatever. 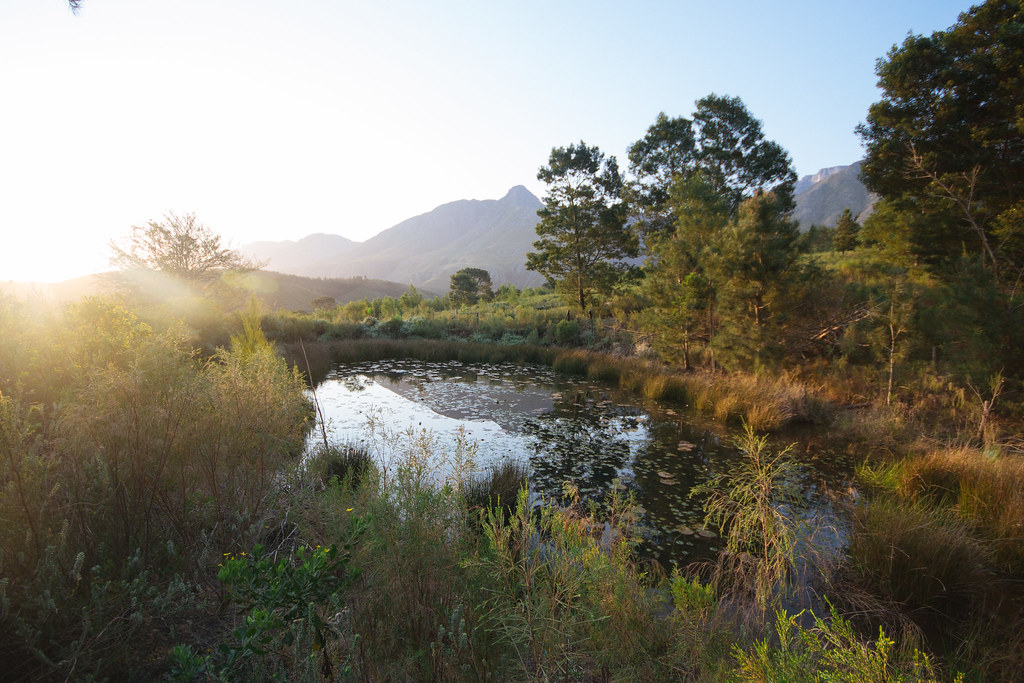 They road tripped through the Karoo, to Elandsbaai and to see a house in Picketberg. Warren laughingly says that they didn’t even know where Picketberg was initially. It was only after their prospective plans for a house fell through and they grew tired of searching did Warren find ‘Die Skooltjie’ online and put in an offer on it with all the money they had.

“We stayed down the road at Wildebraam Berry Farm and walked past the house each morning. The owner at the time, Annalerie invited us in, cooked us roast chicken and vegetables and allowed us to sit up here beside the dam just to experience the place,” says Elizabeth. “We knew it was the place for us and after resigning,packing our lives up, we moved here seven months ago. I still wake up every morning and marvel at how amazing it is here.” 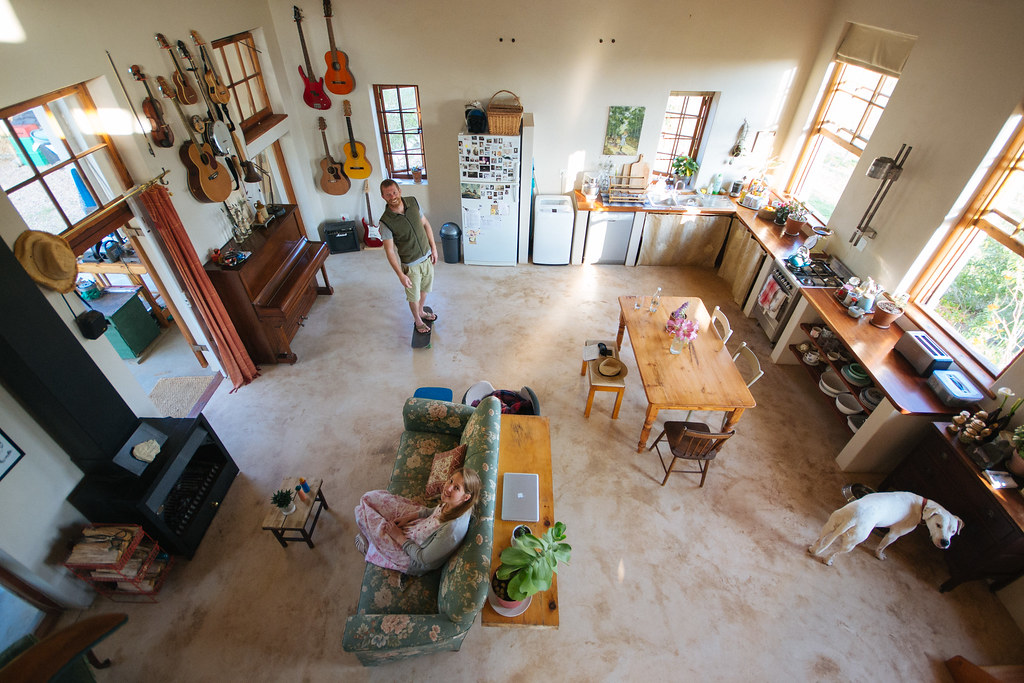 As we descend from the hill to see the horses, we duck beneath a tree where one of the Warren’s wooden bird feeders hangs. “We’ve tried a lot of things,” says Elizabeth, “bird feeders, organic bees wax polish for wood work and children’s toys. I first starting creating digital products while moving. Since then I made colouring in pages, children’s books, post cards, illustrations before making the dolls.”

After Warren hands me a beautiful hand-crafted wooden hippo for my son and shows me the solid bear, painted toys with a long nose and hat along with a wooden car he’s made. I wave goodbye to this warm, talented and humble couple. As I drive out the farm gate, along the dusty road and back into town, I recall something Warren said, “It’s amazing though, something always happens and it’s always at the last minute. Life presses you, but if you want something and you put it out to the universe, it definitely comes back to you.” 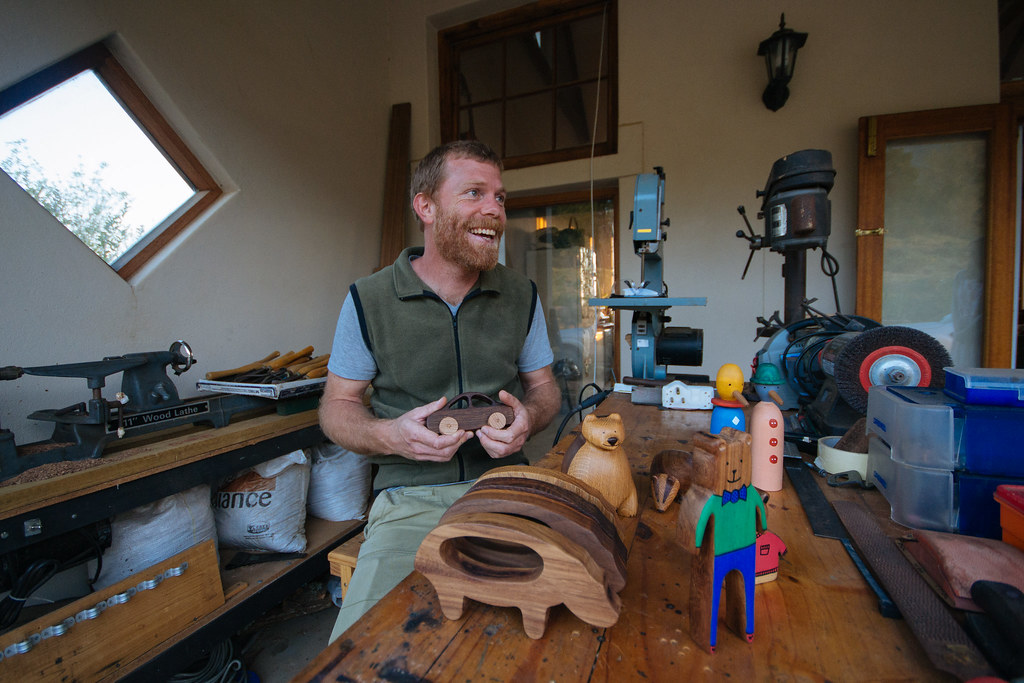 Elizabeth dreams of someday building a conservatory- half studio- half greenhouse, having children, telling stories daily and having her own exhibition someday with murals, giant dolls, music and plants. And I somehow know it’s bound to all come true.

To see some of Warren’s wooden creations visit: http://cargocollective.com/warrenbradley 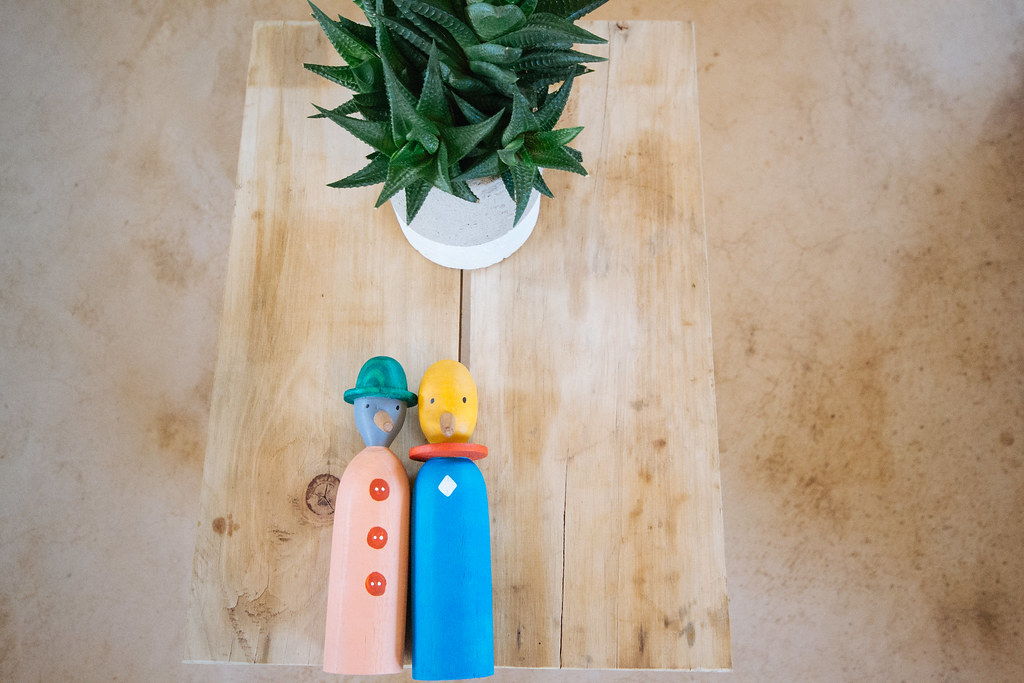 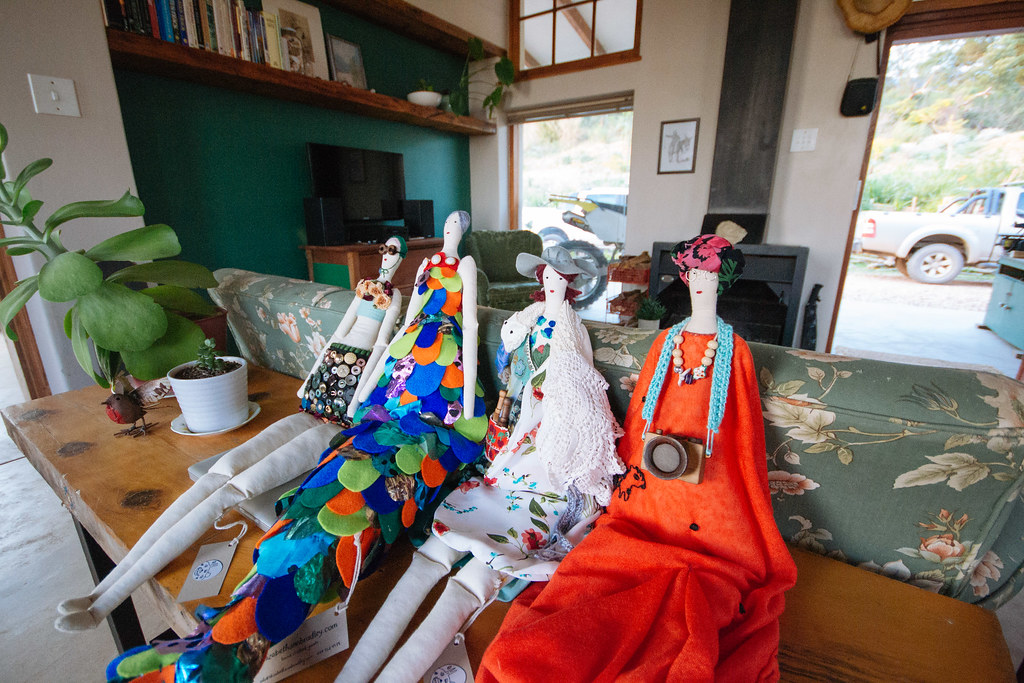 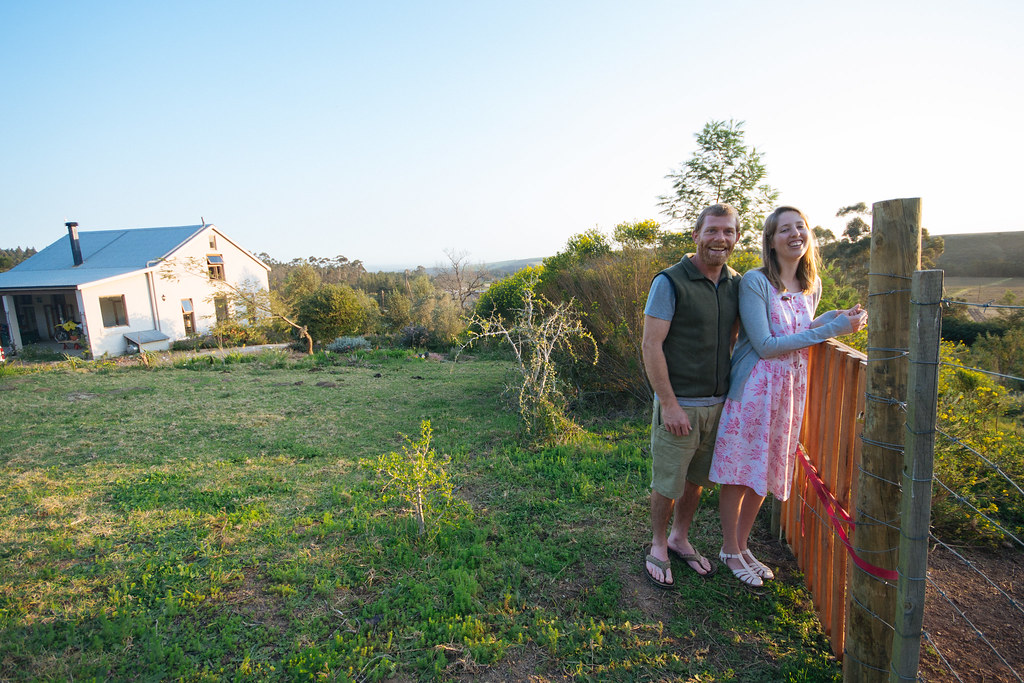