You are here: Home / Travel / Africa / The Breathing of a Lion.
128
SHARES
FacebookTwitterStumbleuponBufferPinterestPocketGoogleWhatsapp
Mail

The sun was at its highest position in the African sky, casting it’s hottest rays down over the sandy banks. A black starling with blue and green shine flew into a nearby acacia, monkeys could be heard making their way into the distance and flies buzzed around in the scorching air. It had been a long time since this bone-dry river bed had seen any rain. The heavens were not set to open and lend moisture to the earth for another two weeks and all that was left behind were sparse green tufts, soft pale sand and green bushes. 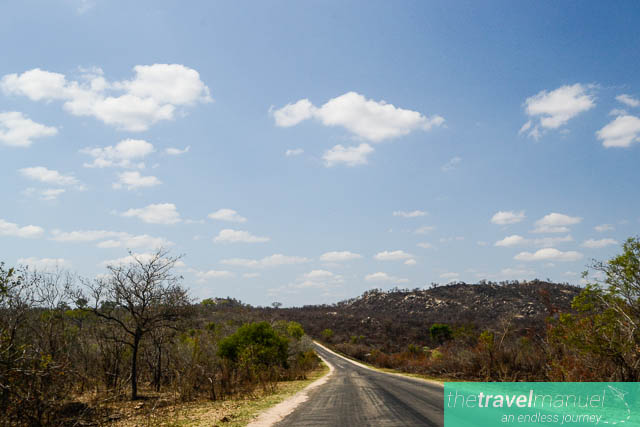 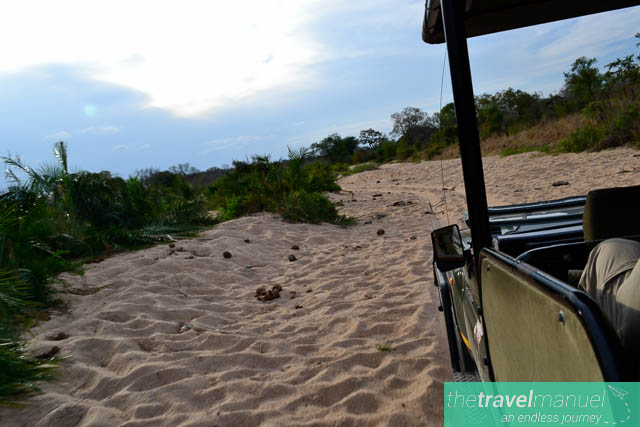 The earth of the riverbed presented itself free of any water. But pebbles, large rock formations and fallen leaves claimed its place. Nearby Marula trees had been stripped of their life-giving bark by elephants and over time did not survive the binge on behalf of these gentle beasts. Instead some had collapsed over into the path were the river would once again flow. 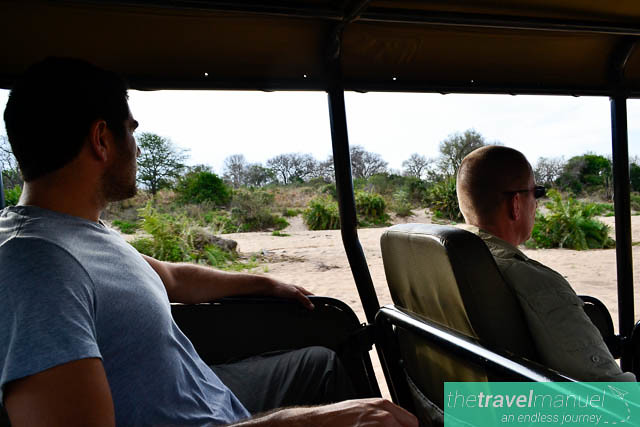 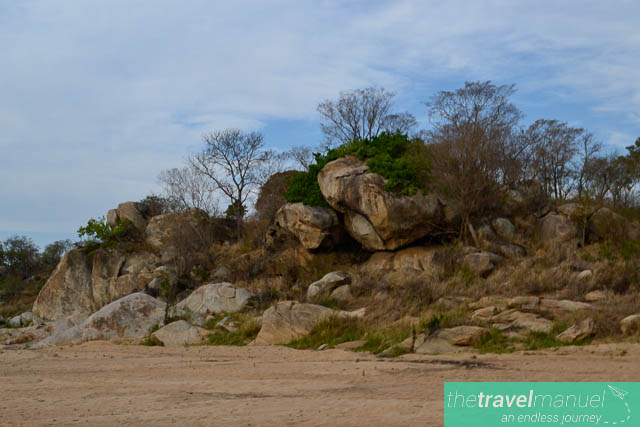 All of us were careful not to make a sound as intensely focused our attention on the far end of the barren bank. An impala lay flat over a few rocks. From this distance it could have been mistaken as alive. But the from behind the lens we could clearly view its limp, beige body and head slumped at an unusual angle. 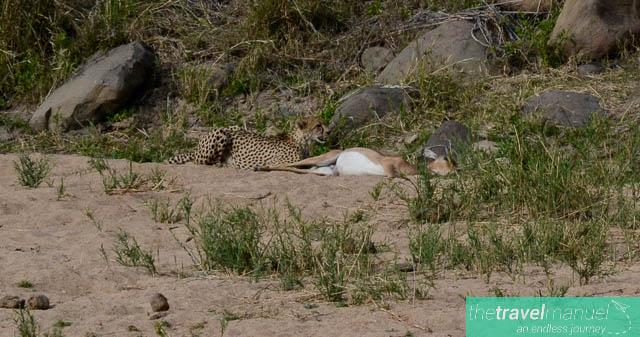 It’s capturer lay right beside it, licking it carefully and in a seemingly distracted manner. She sat up on her furry haunches as if bored and glanced around for any chancers wishing to hone in on her catch. She was all alone and slowly moved ever so slightly away from her prey to lie down and survey the land. She had expended all her energy catching her meal and now she was too exhausted to eat it. She would have to wait but not too long or other predators would chance upon her solitary meal. 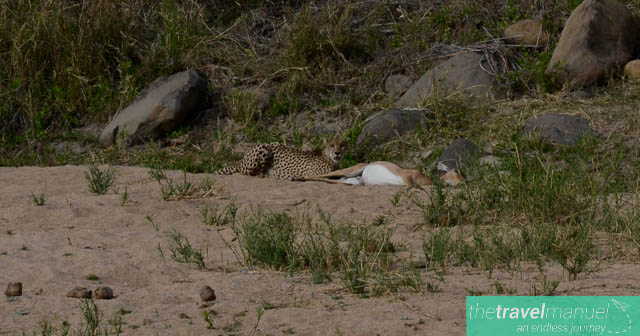 Once it was a few degrees cooler, we made our way down the incline and further down the riverbed in a game vehicle. We trudged along in the thick sand weaving along the trail and bouncing around wildly as the vehicle navigated terrain which no ordinary van could. An eagle soared overhead and what appeared to be greyish-brown rocks began to move. We came to silent halt beside three white rhinos. 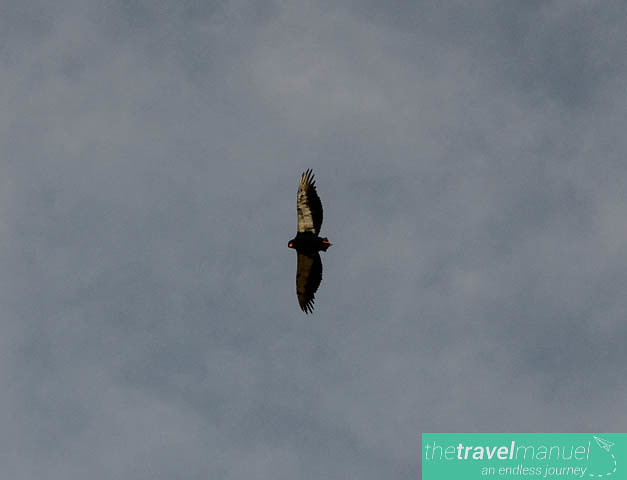 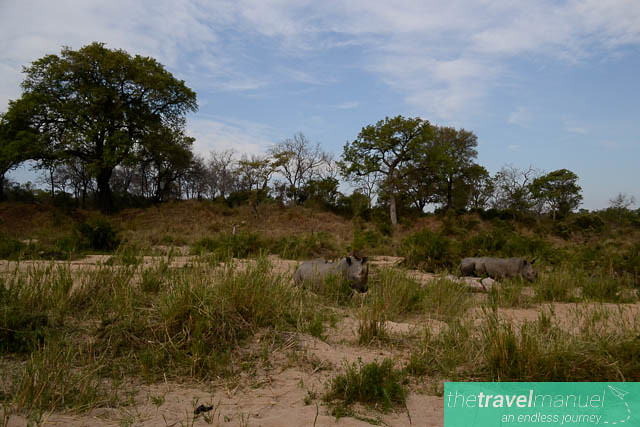 With their square-lipped mouths, they continued to chew leafy greens whilst keeping an eye on us. The rhino who seemed to be in charge faced us directly not once averting his gaze, ready to stand his ground if we posed a threat. He must’ve decided that our vehicle was way bigger, because he stomped his foot kicking up sand, seemingly snorted and trotted off in a huff. 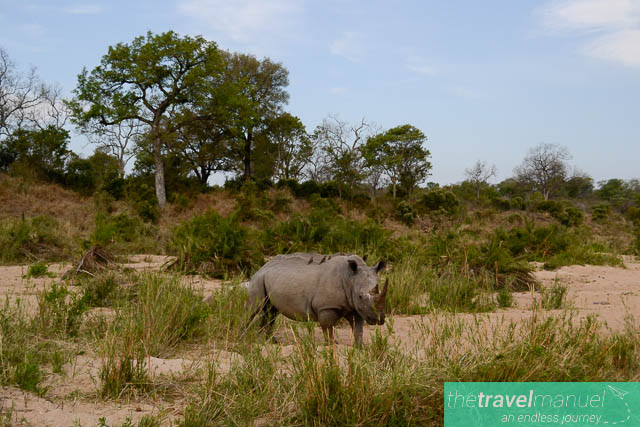 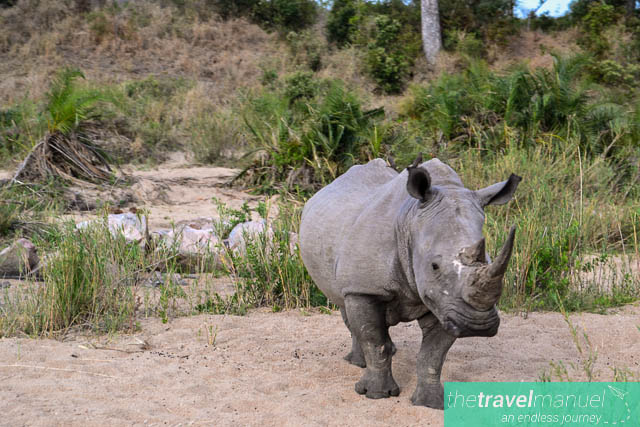 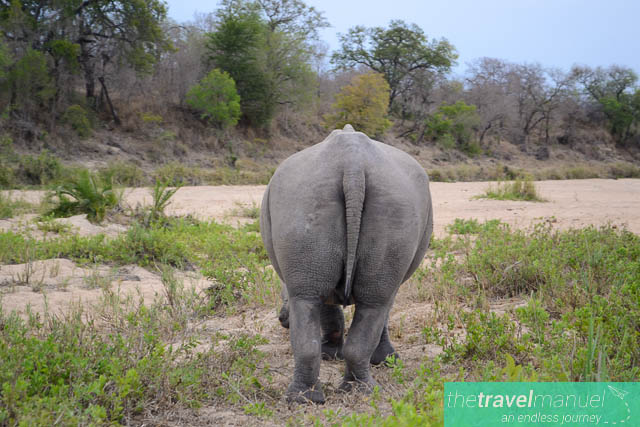 A group of kudu quickly strode past us on their way up the river bank. Their white stripes clearly stood out on its smooth, tan body and whilst they weren’t as skittish as the impala, they too were not certain of what we were and hurried away. 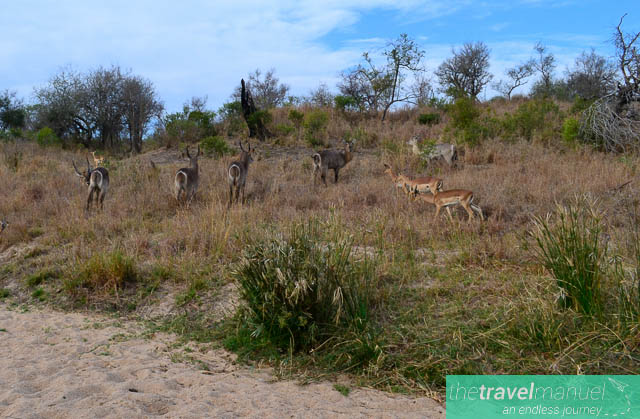 An owl sat on one of the highest branches of a tree almost signaling to us that night time was not too far off. As I watched from a much narrower river bed, he rotated his head almost fully, perhaps to check what was behind him. 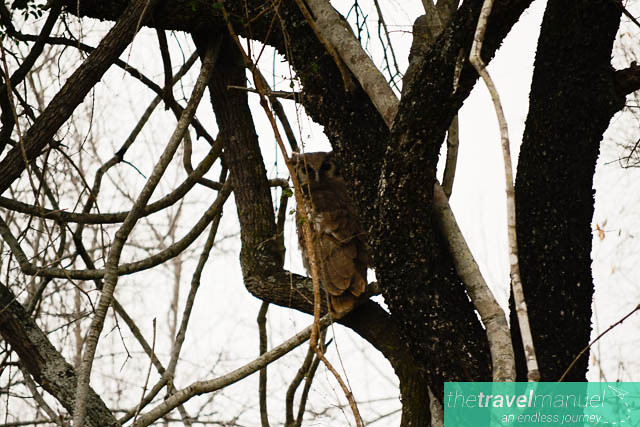 When passing a wide, open space of grass and a tiny waterhole, the dwindling light left us wondering what the yelping sound was. In the shadowy distance below were a group of wild dogs surrounding an animal. It was clearly in distress and once we looked over to the waterhole we knew a hyena was being attacked. The other hyena accompanying it watched from the safety of the water knowing that if he did not escape this territorial attack, he would be next.

The attack continued, not sure if the hyena was still alive, he took his chance and tried to slink away quietly hoping to be unnoticed. But the pack of wild dogs knew his plan and decided that their constant competition would not get away unscathed. They attacked and fought, but amidst the battle, the somewhat wounded hyena managed slip away and moved towards only to seek the comfort of a pipe going beneath the road. His friend was not so lucky.

When all the light had left the sky and only crickets could be heard, we saw two figures lying on the warm tarmac. Everything else was still and the ranger’s light shone on a mane and another one behind him. Parking right beside them, we watched as two male lions rested whilst staring out into pitch-black darkness, whilst panting quickly in attempts to catch their breath.

They appeared hypnotized and didn’t give us a second glance. They appeared well past their prime with fur that revealed many battle wounds and teeth that were no longer young. Their stomachs portrayed that their hunt had been successful and after expending all their energy hunting and catching a buffalo, they were now beyond exhausted.
Jan switched off the engine and the light until even the lion could be seen no more. As I sat looking out over a bushveld of black, all I could hear was the heavy and labored breathing of a lion. 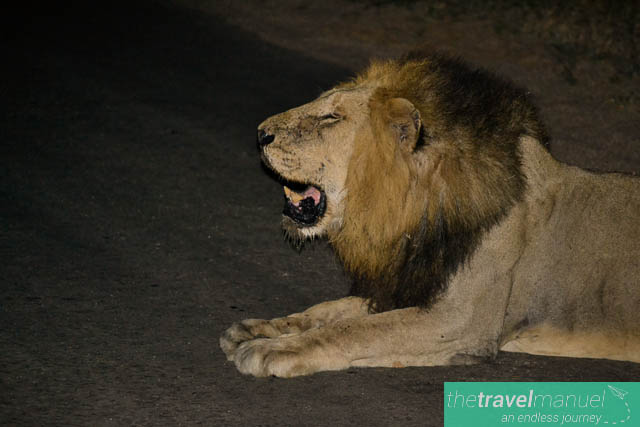 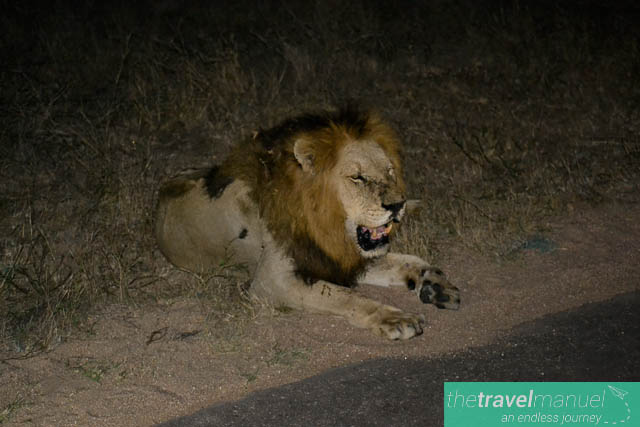 This game drive experience was sponsored by Jock Safari but all views expressed are my own.