After much excitement and minimal planning, our first trip to Bali saw us spending 3 nights in Canggu, North Kuta. While Canggu itself is really quite a wonderful place with its little coffee shops, brilliant breakfast spots and tasty restaurants at (ridiculously) affordable prices, just a few kilometres South lies the city (or swamp), a modern day “Sodom and Gomorah” that we were about to be violated by – in every sense of the word.

Whilst I am all for “eating the meat and leaving the bones,” there are some places in a country which you should just skip all together (especially if your time is as limited as ours was). Those familiar with the ‘real’ Bali will certainly agree with me.

So here’s why you should steer clear of Kuta – maybe not always – but definitely in December:

1. December is the rainy season. And the high season.

The only reason I suspect people book holidays during rainy seasons is to enjoy off-peak tranquillity and good deals – which couldn’t be further from the truth here Kuta. Bali just happens to be one of those extravagantly beautiful islands in South East Asia where the monsoon collides with the peak travelling season of every Western country in the world – the December holidays.

So, while you may enjoy cooler weather, you’ll be trading sunshine for tons of tourists. Meh. 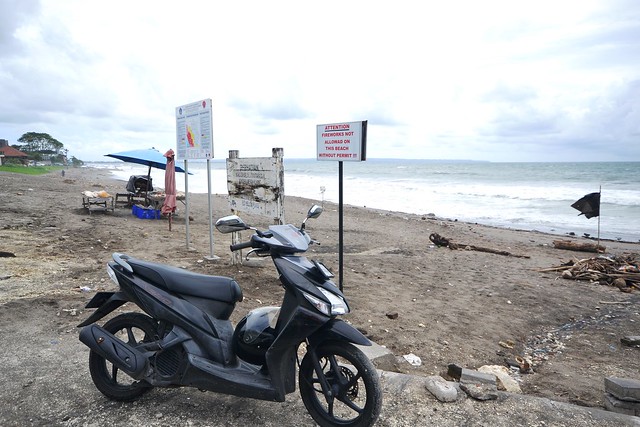 Super amped for sunshine and a swim when we arrived here.

Incredibly, even on a scooter, the traffic is so thickly woven that you won’t be going anywhere quickly. We thought we were in Bali, but suddenly the streets had taken on a distinctly Bangkok (and even Manila-like) appearance.

We could not believe the sheer amount of cars clogging the roads leading to the beaches, restaurants, shops or anywhere in Kuta. At least, we thought, the beaches had to be brilliant to warrant this amount of traffic. *Roughly 10 km’s took us just over an hour on a scooter – we didn’t know local routes but neither will you.

(The only good thing about that traffic was a travel fridge we carried along with us. Here are some suggestion to help you get the best mini fridge available out there.)

In a car, you won’t get anywhere in less than 2 hours unless you live in the heart of Kuta and live close enough to be able to walk everywhere. Two things – who wants to sit in traffic on holiday? And who wants to live in Kuta? (Hint the answer coming to this question lies in the title of point number three.) 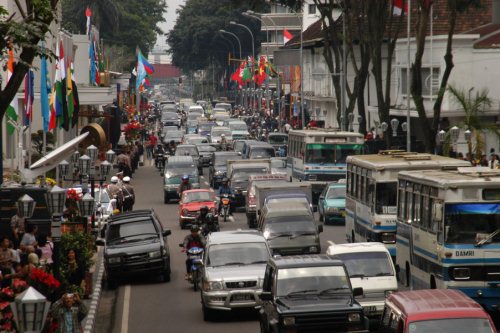 3. You may get lost in a sea of drunken Aussies.

Aside from their rugby and cricket teams I’ve got nothing but love for Australia. Vaughan and I both have family in Australia and Sydney has so many similarities to my beautiful Cape Town – BUT – I did not come to Bali to see, hang around with, get hit on by, and dodge the vomit of overly drunk Aussies.

I FINALLY understand why Australia is such a safe and compliant nation, most of their young citizens have abdicated to Kuta to completely lose their minds, bodies and brain cells to every kind of drunken debauchery out there.

It was as if they were let loose for the first time and had to take full advantage of the music, the sex tourism and drugs. Young men in search of young Aussie ladies probably won’t find many as for every one woman I saw, I saw eight males staggering by. It was, as they say, a *rooster*-fest!

I have to add that a great deal of this is due to (apparently) Bali becoming the place that Australian school leavers go to celebrate the end of their schooling career. I fear however that a trip to Kuta may render those years null and void! 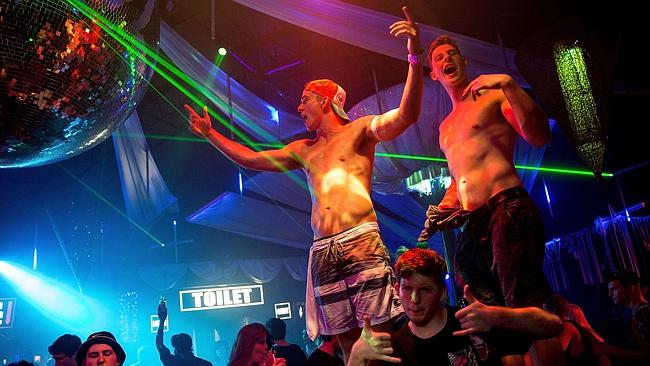 4. It is probably the seediest and saddest corner of Bali.

Very ugly things begin to rear their heads as a result of mass tourism and the downward spiral of a place almost cannot be stopped as mass amounts of people continue to feed their inner hedonists to the utter and complete detriment of the local population.

We’ve seen this kind of thing everywhere. I guess we were naïve to have thought Bali would be unaffected.

Whilst I love to dance and will never say no to a party, I dare say I’ll never return to Legian Street at night. This is the strip which houses some of Bali’s busiest clubs and where inhibitions come, in their thousands, to die.

Foreign men do full dance routines on bars, working Balinese girls grind and flash their boobs at drunken onlookers and worst of all was the behaviour it encouraged on the streets.

We couldn’t take a step (literally every 8-10 metres) without being harassed by drug dealers trying (but not very hard) to seem inconspicuous. Hell we were even offered drugs on our scooter, by a guy on his scooter – while we were riding!

Even sadder were the impoverished mothers who paraded their babies around to sell bracelets on corners and forcing their slightly older children to do the same at 3am in the morning. 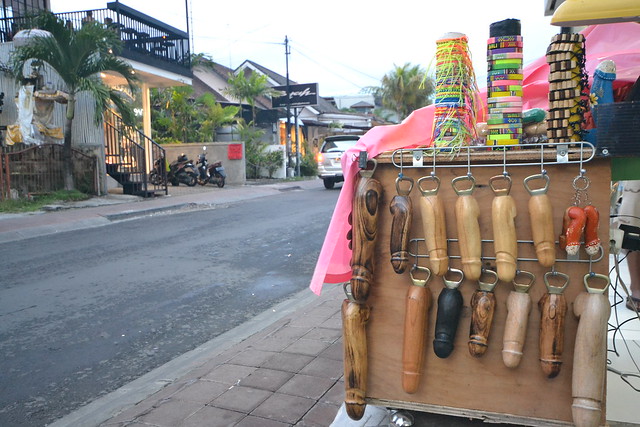 A wooden penis bottle opener for your key chain miss?

5. Kuta Beach is nasty this time of year.

The traffic was so bad (and our time so limited) that we couldn’t get all the way down to Balangan or Padang Padang, the lovely beaches our friends pointed us towards, so we had to settle for Kuta beach.

From afar the water appeared so blue and we were so excited to just say we swam in the waters of Bali – until we walked down to the beach where everyone was swimming and beginners were learning to surf.

It was the dirtiest beach we have EVER set foot upon. We’ve lived in Asia for a while and the beaches here aren’t generally that great. But Kuta beach was lined thick with plastic packets, broken glass, light bulbs, packets and other horrible things – and this was only on the sand!

The boys were so desperate they decided that despite this, they must go into the water. I decided to follow (after much encouragement) thinking it couldn’t be that bad… 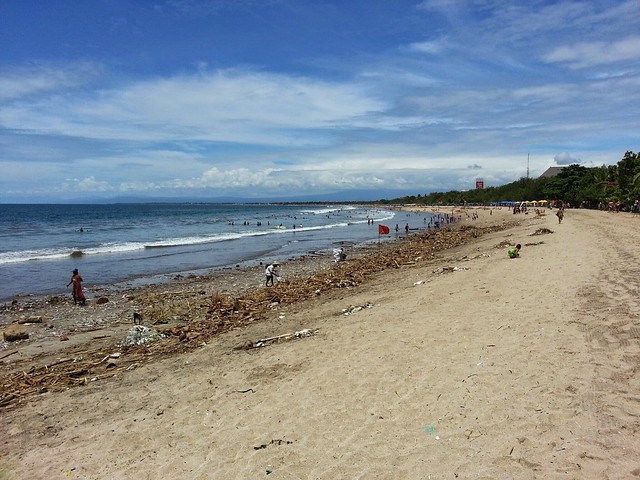 A very small section of the beach.

…It was worse than I could’ve imagined.

When I was knee deep with plastic bags and packets wrapping around my shins, I called it quits fearing a disease would jump species. The boys persevered but after the baby diaper brushed past Vaughan even they had reached their limit.

Just next to us a surprising amount of people were swimming, literally wading in this filth. We couldn’t understand why. Most of these people were Australians that hail from a land of magnificent beaches.

I may be a beach snob, forever spoilt by Cape Town, but swimming here was an actual health hazard – this was confirmed by look on my husband face – a man whose definition of “dirty” is, at the best of times, questionable.

I spotted an empty condom wrapper and the scales finally fell from my eyes. I decided to accept the reality of Kuta and place the whole area into a box somewhere in the back of my mind. A box separate even of Bali.

We may have given Kuta a bad rap here. The truth is that it’s just not for us. We are over seeing tourism destroy a place. I think it reminds us how humanity is simultaneously innocent, fragile and also completely and utterly ruthless.

To have seen communities both pure and those affected is a learning experience that we’ll never regret but it’s not always easy to accept, especially when it’s gone this wrong.

So whether you have been to Kuta and loved it or are desperate to go there after reading our account is your own vibe. Please just be responsible and remember that after you leave life still goes on there, so build it up – don’t break it down.

We probably won’t ever return to Kuta and if we do, it definitely won’t be in December.

So now that we know better. Next time we’ll head straight here… 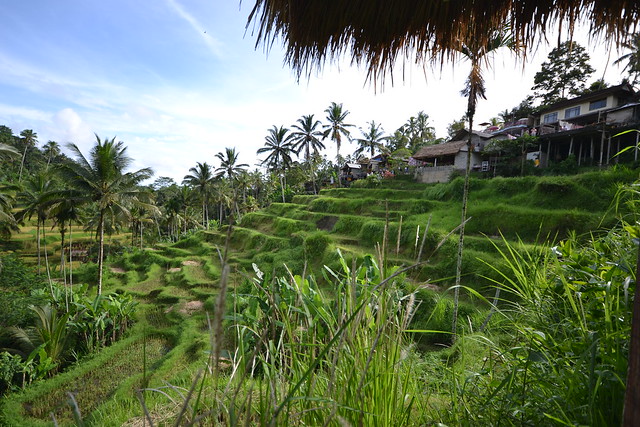 To magical, tranquil Ubud where you can find quiet corners, a table to sip coffee and cocktails whilst overlooking rice paddies and plantations and to catch a glimpse of the Bali everyone’s been trying to sell you.

Have you ever been to Kuta? Did you enjoy it and which other parts of Bali do you recommend?