Our Trip To The Matang Wildlife Center

After enjoying a delicious feast of the famed Sarawak Laksa, and stopping for torches in Kuching’s city center, we all jumped enthusiastically into our car which was now pointing its nose in the direction of the Matang Wildlife Center, based in Sarawak’s pristine Kubah National Park. 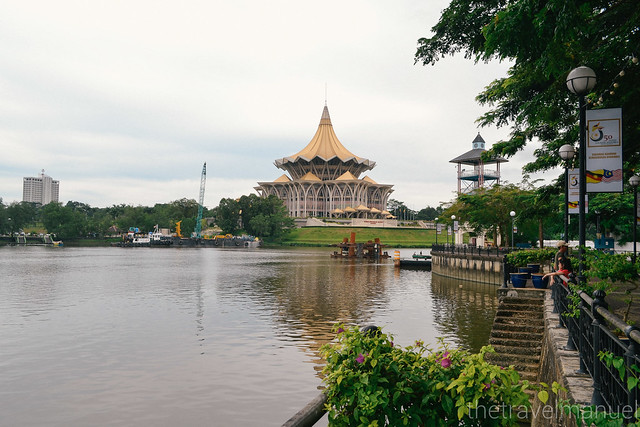 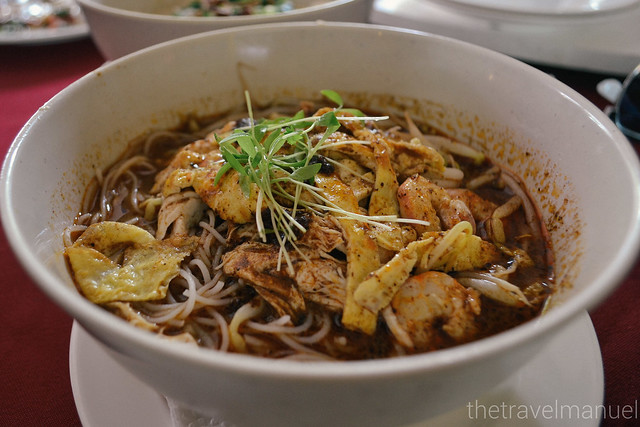 Mmmmm….Sarawak Laksa 🙂
Along the road to Matang we were exposed to the raw beauty of Sarawak and Kuching in particular. We heard fascinating stories and all about the city’s “White Sultan,” Sir James Brooke, an Englishman who was said to have named Kuching after the wild cats in the area (Kuching means cat in Malaysian). 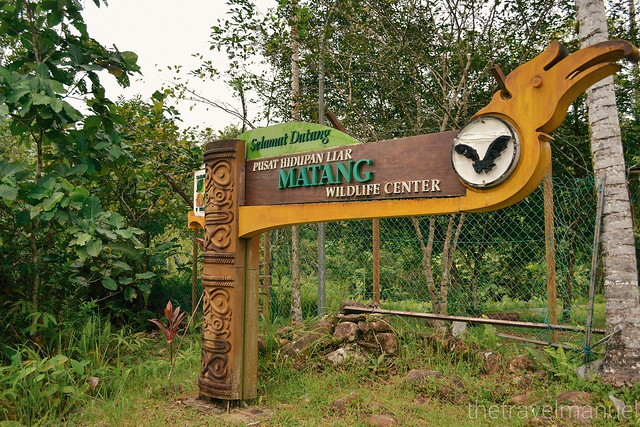 Around 35km after leaving Kuching we arrived at Matang Wildlife Center. Which is exactly that, a wonderful wildlife facility that looks after the regions spectacular animals and provides valuable human assistance to the protected animals and unprotected animals nearby. Though the team at Matang have other responsibilities, the main program at Matang is of course Orangutan care and rehabilitation. They use a variety of techniques to raise up abandoned and orphaned Orangutans with the ultimate goal of successfully reintroducing these guys back into their natural habitat. 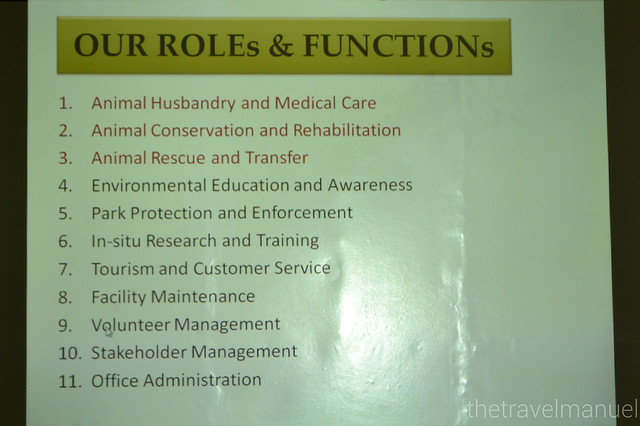 As you can imagine we were extremely excited to get the opportunity to see these adorable creatures once more. The other, equally impressive, species at Matang include Sun Bears, Sambar Deer, Civet cats, Sea Eagles, Horn-bills (of all varieties), the Bornean Gibbon, Crocodiles and more.

Unfortunately by the time we checked in the day was lost to travelling (which turned out to be a blessing in disguise) so we enjoyed some free time and headed down to the river which we heard had a few rock pools. We were so hot and sticky that the disappointment of not seeing the Orangutan’s vanished at the opportunity to spend some time in the cool river. 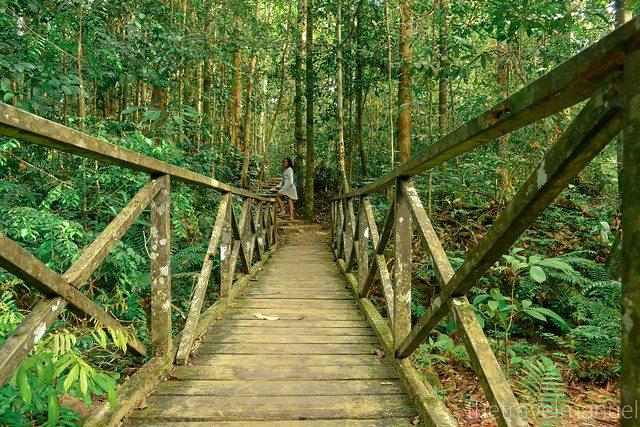 Lauren making her way to the river. 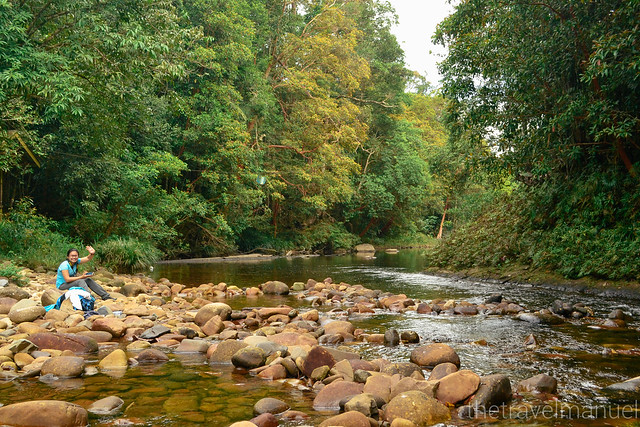 Farah, our new Malaysian blogger friend, enjoying herself beside the river. 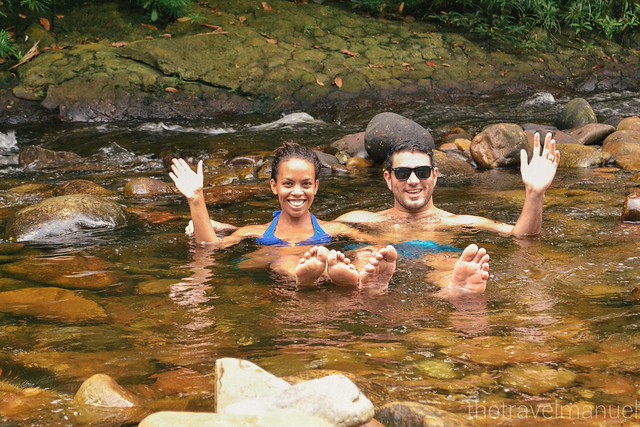 Wish you were here!

Sarawak hospitality is legendary! The general manager of Matang Wildlife Center’s wife cooked us up some delicious treats the entire time we were there including afternoon, snacks, a wholesome breakfast and one of the best Malaysian dinners I’ve had. We also saw the biggest banana we’ve ever seen. It was longer than Lauren’s forearm!

Look at the size of that! Mind you, most things in Borneo are bigger than “usual” including monster ants.

This is made from Ferns and is absolutely delicious. 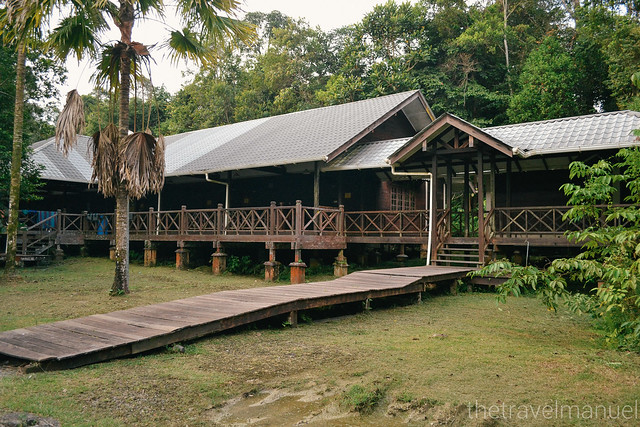 This was our digs at M.W.C. Basic, but cheap and clean (10RM /pn). The many international WOX volunteers also stay here.

The next morning we rose early and gathered around the breakfast table eagerly anticipating our tour of the animal enclosures. As previously said, Matang Wildlife Center’s main goal is to rehabilitate Orangutan and other wildlife back into their natural habitats. Over the years however, some of the Orangutan have become trouble makers and upon release began to attack humans. Wisely, M.W.C decided to keep these Orangutans in spacious, but permanent enclosures so as to avoid future attacks. 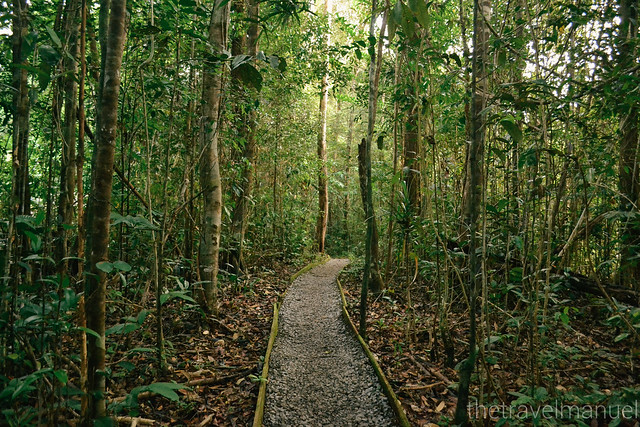 There is nothing more thrilling than entering a jungle that looks like this. 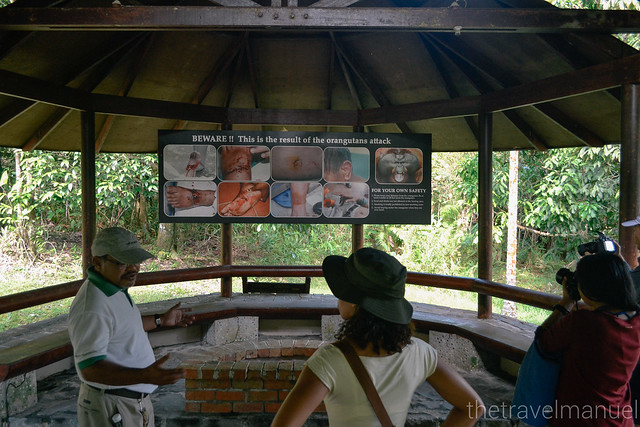 Safety briefing before the tour. Orangutans can be dangerous! 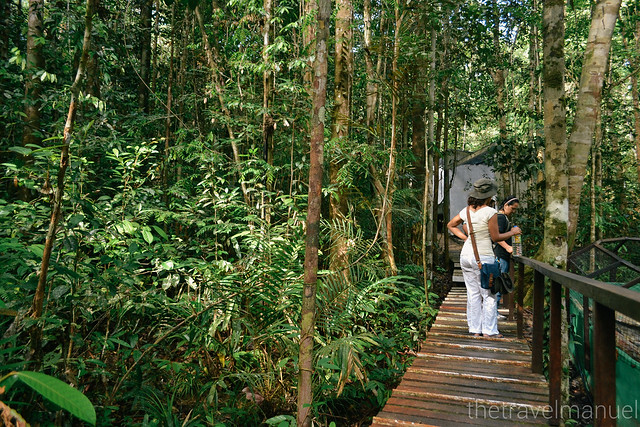 Lauren and Angela looking over the Crocodile enclosures 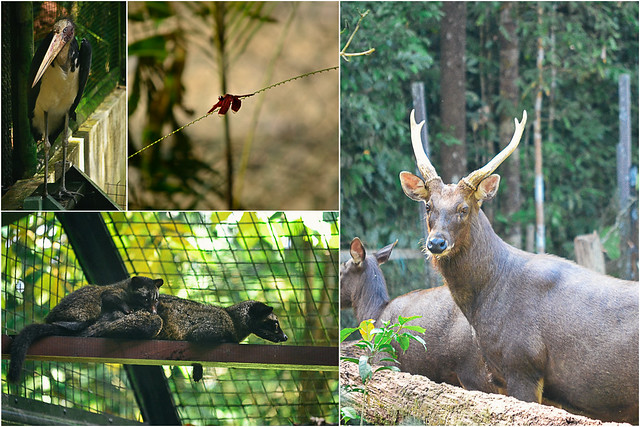 Some of the animals at Matang/ 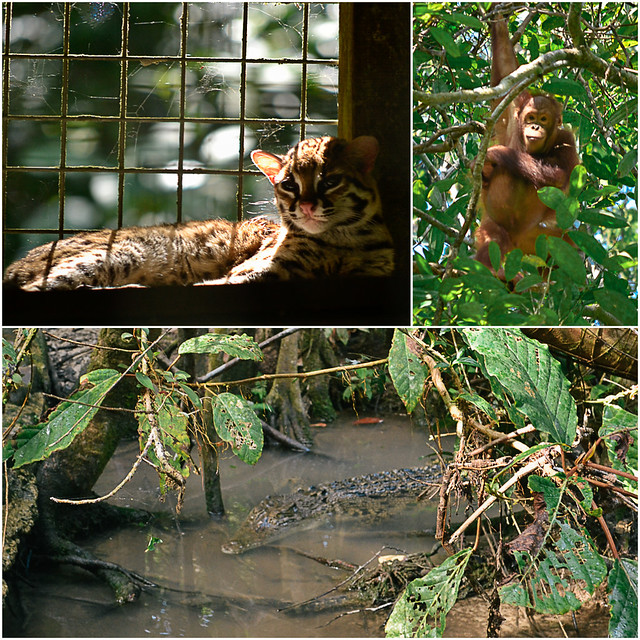 Crocs, a leopard cat and our first view of Dr Kok the Orangutan! 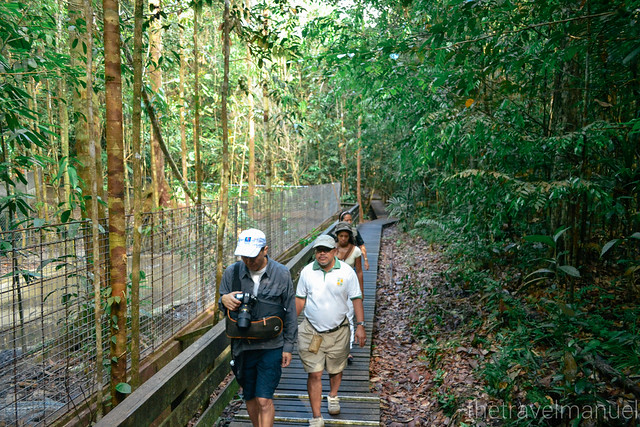 Being led my Mr Sarawak himself, Michael from Sarawak Tourism! 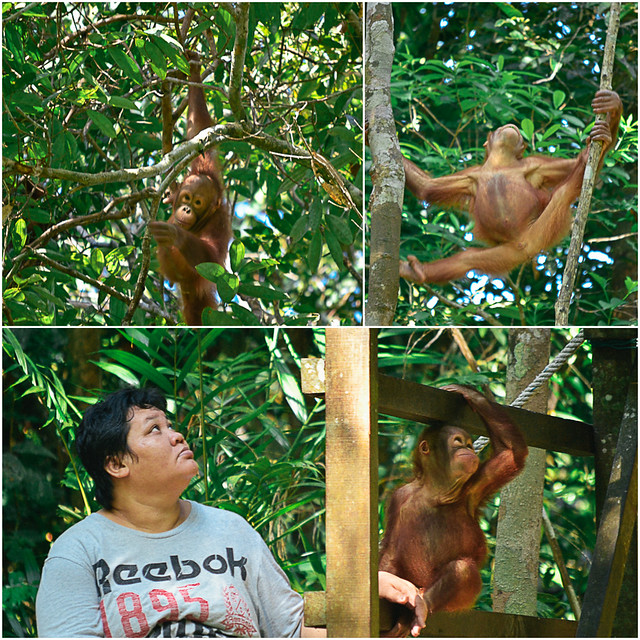 Dr Kok, Bayu and their trainer. It really is an Orangutans life! 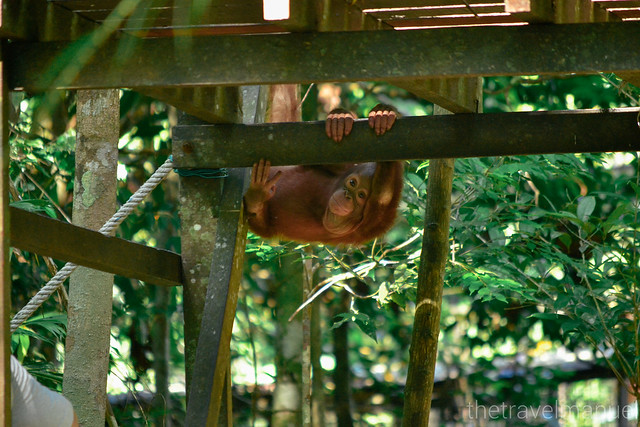 Bayu must be the cutest Baby Orangutan we’ve ever seen. 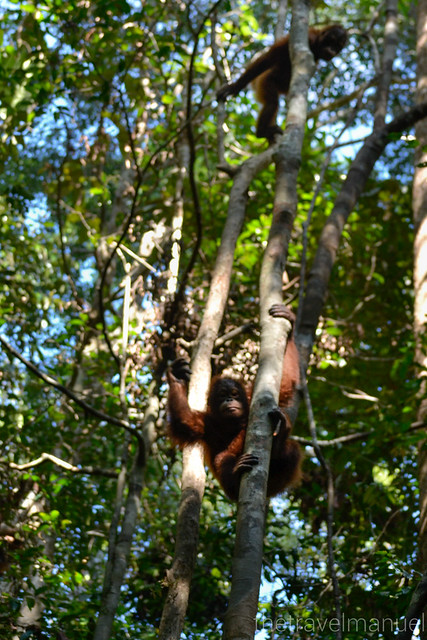 We got the opportunity to see Orangutan’s being slowly reintroduced into the wild. They were extremely interested in us! 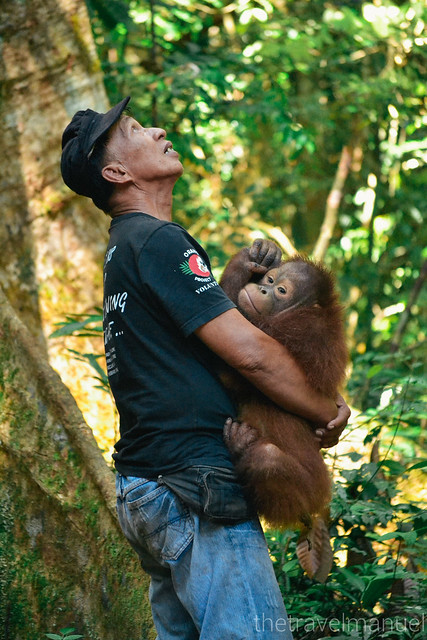 In the safety of his trainer. 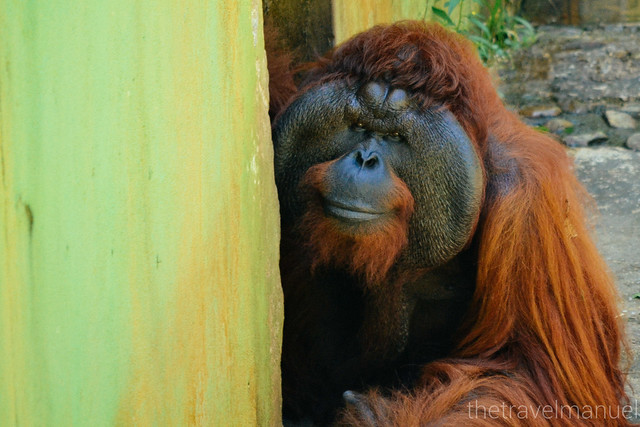 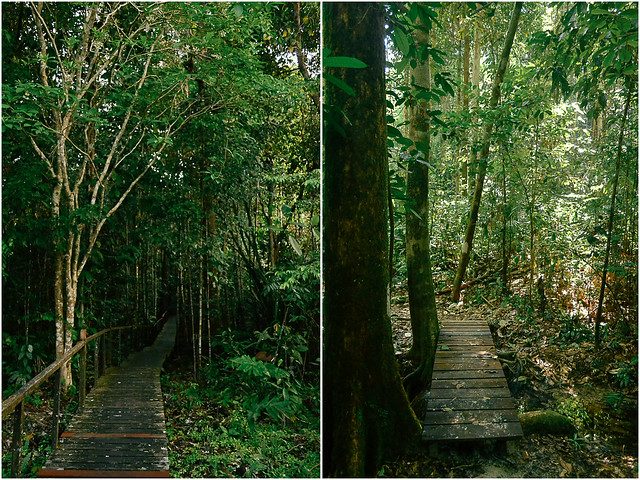 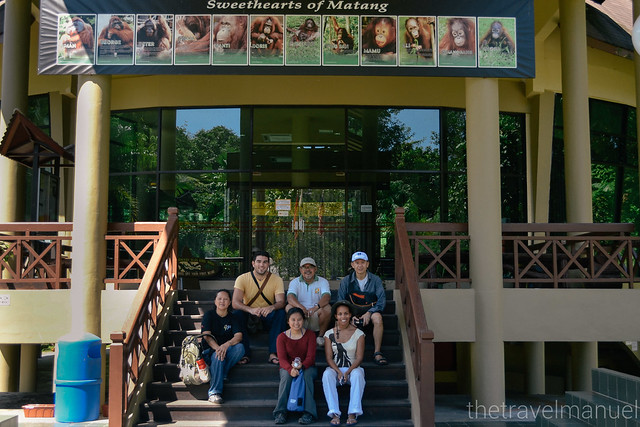 The team on the last day.

Our time at Matang Wildlife Center ended too soon. There is something so calm and peaceful about this slice of Borneo that has you craving more…Perhaps one day we’ll return as volunteers and actually get to wash the babies!

How To Get There

Fly straight to Kuching city in Sarawak or catch a flight from Kuala Lumpur. Matang is about 30 to 35km from Kuching and there is no direct bus to get there so hiring a taxi is recommended. Accommodation is super cheap and can be booked online here.