Exhausted and irritated from a lengthy layover at Sao Paulo’s awkward airport, we grabbed our luggage and fell into a taxi. Night was falling, buildings flew past and just as we caught our first glimpse of the ocean, the excitement started to build. Couples held hands on the sidewalk, people moved around like it was the weekend and that’s when we spotted it- a statue of Jesus illuminated high up in the dark sky. There was no doubt in our minds that we had made it to the cidade maravilhosa (Marvelous City) Rio de Janeiro.

From the time my cousin and I checked into our backpackers in Copacabana, we heard music in the air. Men perched on the corners playing instruments, musicians strummed in restaurants and samba beats floated out of clubs. Mellow Yellow Backpackers blasted it’s very own sultry beach house music. It was very clear that this was not a city for those wishing to relax. 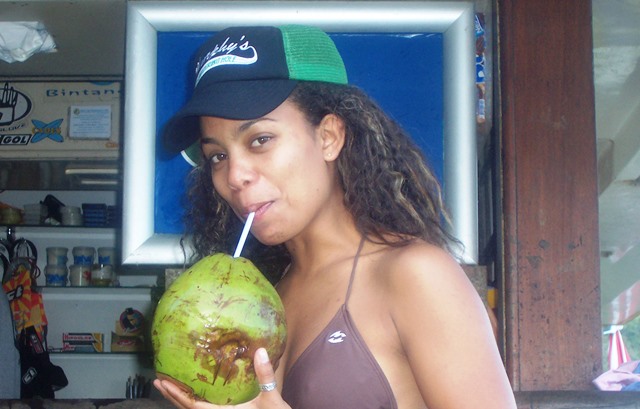 Springing out into the night streets I tasted the fruity nectar of Rio, acai, for the first time. Served up in frozen smoothie form, this purple substance was served in cups along with granola and a spoon. Addicted, I sipped it whenever I was thirsty, tired or hot. The city pulsated continuously. Cariocas ( Rio locals) are the most brazen and confident people in the world. They will not give one thought to what you may think of them and do exactly what pleases them.
No one pulls their hand break up, so car guards can push cars closer together and make room for me in the crowded streets. 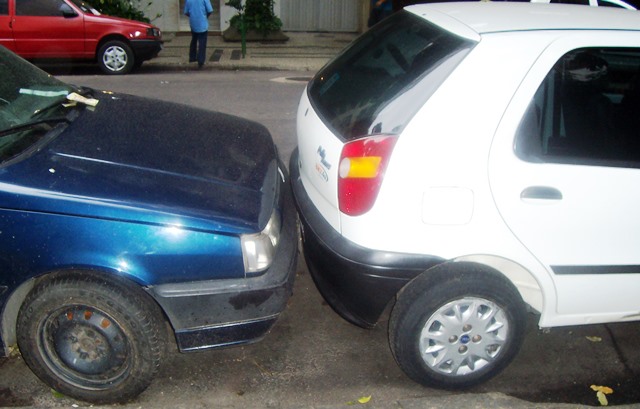 Cariocas spill out onto the beaches from the time the sun comes up. If the guys are not playing soccer in the sand, they’re tossing volleyball. Women wear as little clothing as possible. Obese, skinny, square and tall all wear pieces of string for the bikinis with the aim of getting as dark as possible. As the sun blazes down on the beaches of Copacabana and Ipanema, women just apply more bronzing oil. 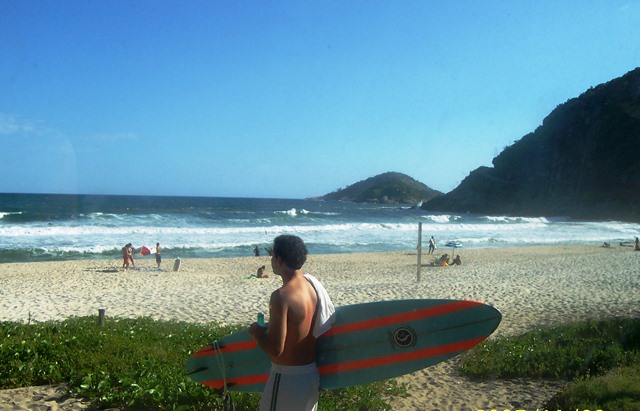 A quieter beach down the coast from Ipanema and Copacabana.

By the time we’ve made it up through Tijuca Forest to Corcovado’s granite peak, we realised too late that we’d picked the worst day to be up there. I could hardly make out the gigantic icon of Christo Redentor it’s so misty. I ran over to the wall and hung over the edge. What would have been a spectacular panoramic view the city was replaced with grey mist. I could see absolutely nothing. 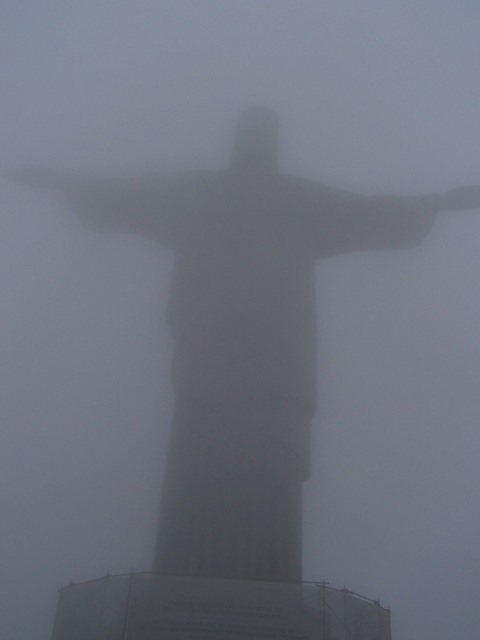 Christo Redentor in the heavy mist.

Our surf tour took us on a road trip of the coast. The Aussie instructor surveyed beaches with motionless ocean- until we reached a one with a few foamies breaking on the beach. Sunbathers looked at us curiously as we fake paddled on the sand and jumped up onto stationary boards. It was the first time I attempted to surf. My weak arms tired quickly of paddling but I managed to stand for a few seconds as the wave propelled me forward. I was hooked. We fell onto the sand exhausted and slept in the sun only to wake up to strange guys taking photos of our derrières. 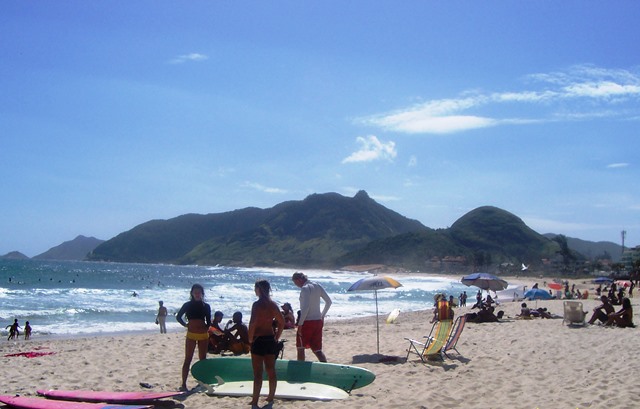 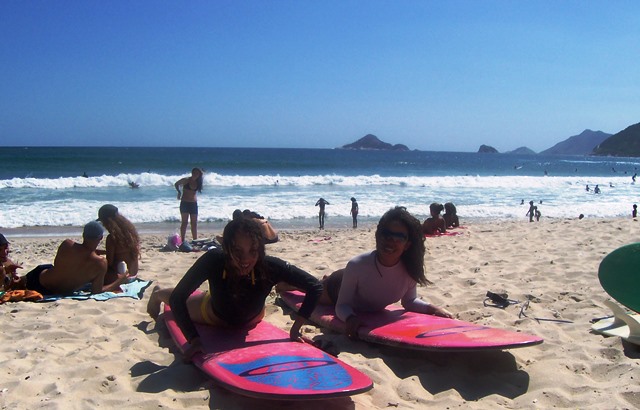 As the sun cast its last rays over Rio, I walked over a beach of squeaky sand. Cariocas smoked marijuana beneath a tree and our instructor told us this was a beach featured in the movie “City of God”. We hiked up a hill with forests of trees and bushes and found an exquisite view over a bay just below. 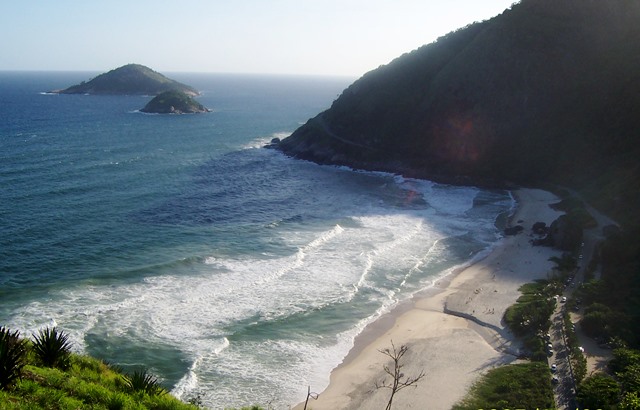 The reward after hiking up to the peak.

The night time offered up more beats, baseline and rhythm. We went to beach parties held every night of the week; caipirinha’s served up at the bars all along the beach. Couples groped each other and kissed fervently on every bench, corner and street. Our backpackers took us to a Funk party in the Favelas. Massive bodyguards stood guard around demarcated ‘VIP’ areas upstairs for foreigners. People spoke Portuguese to me and I just smiled, going along with the whole ‘I’m a local thing’. The funk music dictated that everyone move in exactly the same way. Bums swaying forward and back…constantly. There was no other way of dancing at funk party it seemed.

By the humidity of the day, we explored markets, the arches of Lapa and took the tram through Santa Teresa and at night we ate delicious foods, danced to live music and skipped along the artistic pavements with their patterns made from black and white limestone and basalt stones. But it truly is the taste of acai, the smell of coconut oil and sweet sounds of samba that take me right back. 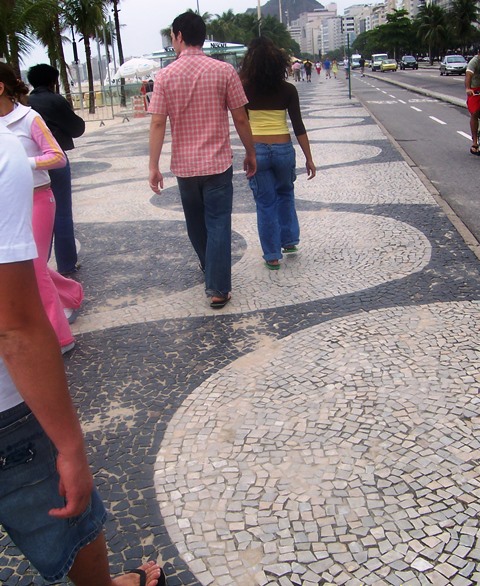 The patterned pavements of Rio. 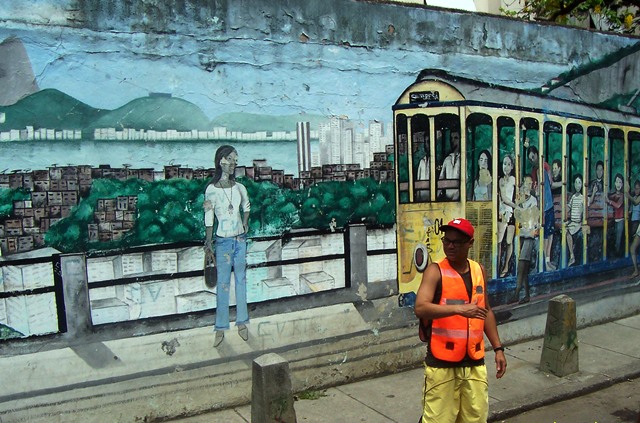 The tram through Santa Theresa. 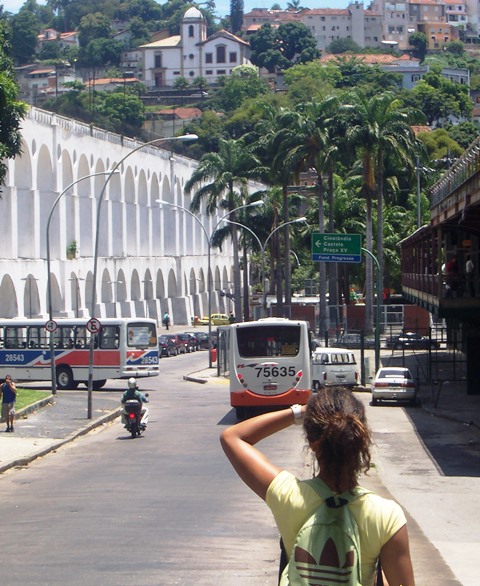 The arches of Lapa. 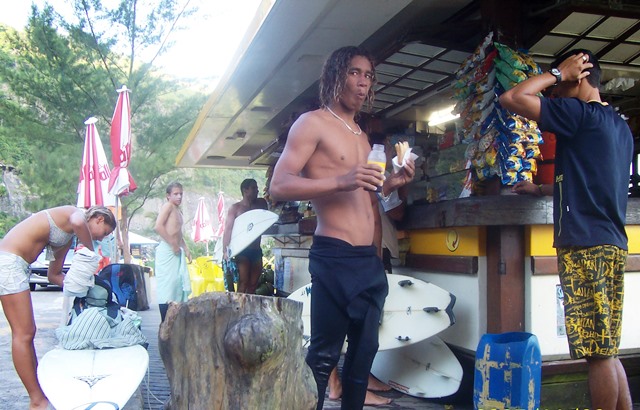 Surfers grabbing snacks beside the beach.