Whilst I am truly devoted to the ocean and the bush, there is an desolate beauty in South Africa’s Karoo which is so easy to fall for. You’ll find a peacefulness and beauty somewhere in its barren open lands, succulents and sparse shrubbery, abundance of whirring windmills, stormy clouds and mountain ranges.

On the weekend of the 24-27th September we road tripped in a car from Around About Cars up to South Africa’s fourth oldest town, Graaff-Reinet in the name of the first National Instameet. The best part of the weekend was meeting up with like-minded countrymen addicted to capturing superb images in their cities and those who loved telling stories of this land we call home and the tracks less travelled on.

It is tough to pinpoint what makes towns like Graaff-Reinet and Nieu Bethesda worth visiting, but there are some reasons we will return: 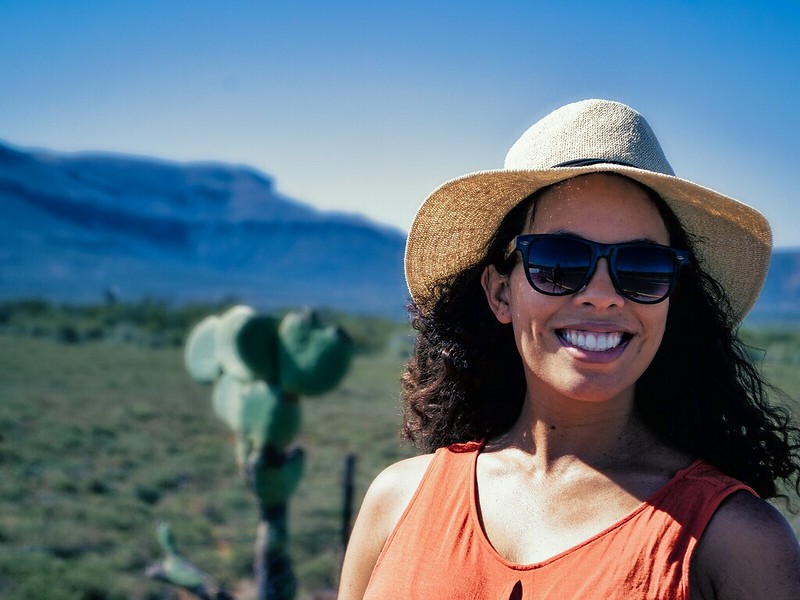 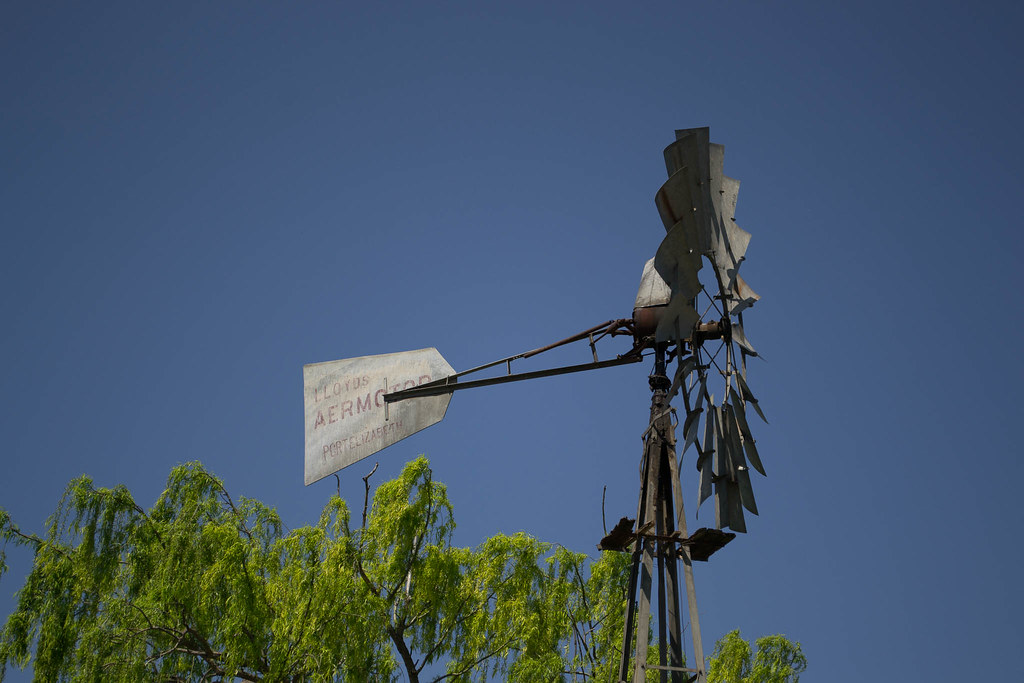 The land of windmills, cacti and succulent shrubbery. 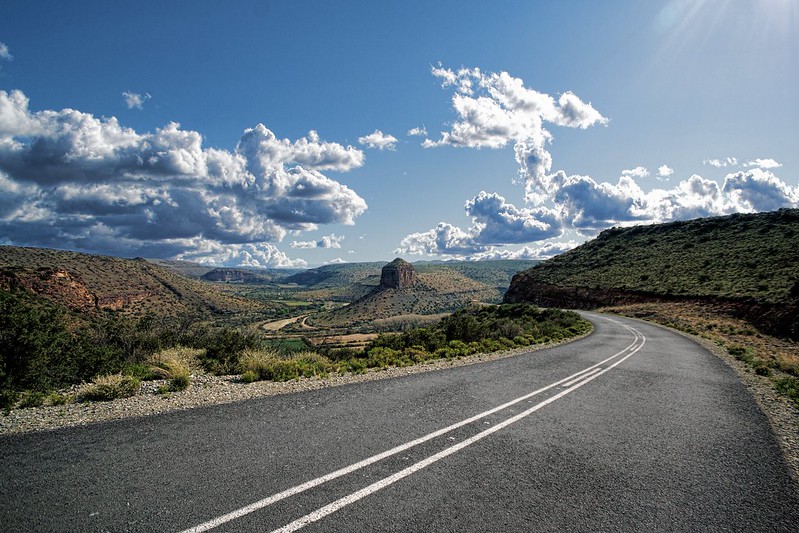 The road to Nieu Bethesda

A haven of artists in Nieu-Bethesda and Graff-Reinet.

From the cluttered studio of sculptor Frans-Boekooi to the First People Art Centre, I encountered endless passion for creating and forming unique works of art. Whilst the descendants of the San /Xam people showcased mythologies from the bushmen on giant tapestries, stained-glass and cushions, seasoned Frans Boekooi adds his own interpretation to portraits of inspirational playwrights such as Anthol Fugard and other popular subjects such as children and animals.

Past artists of bygone era such as Helen Martins has her lifeworks displayed in her childhood home now known as the Owl House. Take in the cement, glass and wire sculptures which proved her as an artist ahead of her time as well as isolated her from the community in which she lived. 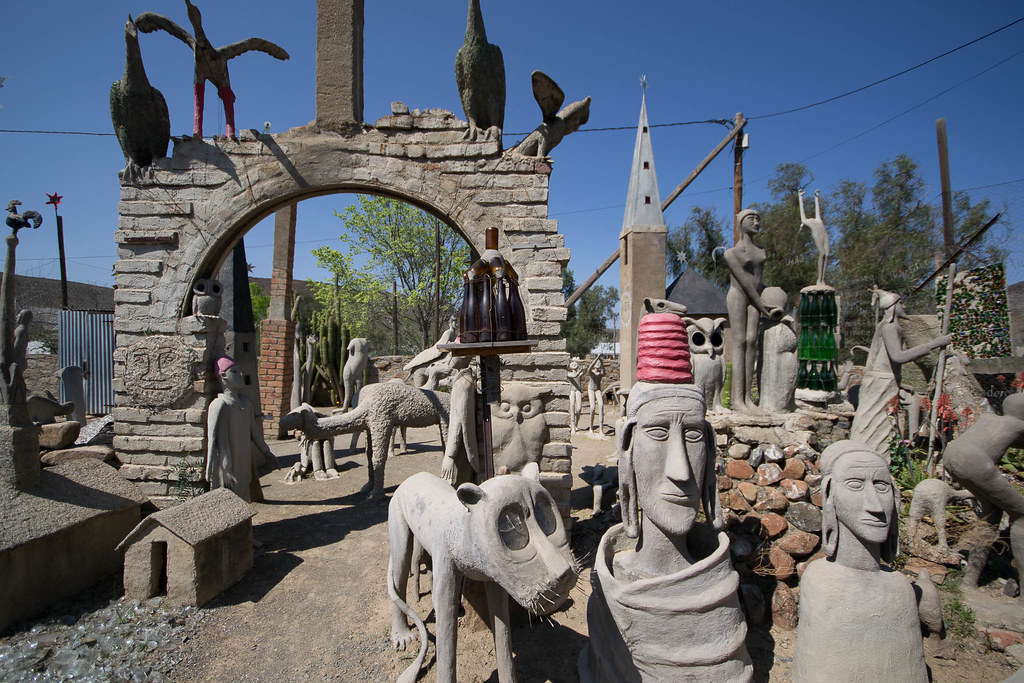 Helen Martins’ Owl House- a haven of enchantment and despair.

A heavenly assortment of Karoo cuisine.

In Niey-Bethesda, you can’t miss out on an afternoon picnic at The Brewery beside the stream whilst munching on one of their cheese platters with salami or their in-house roasted coffee or beer. The Ibis restaurant was a bit too quiet for us but the Karoo Lamb gathered quite a crowd no doubt for it’s famous Karoo meaty offerings.

We loved the assortment of meals on offer at the Polka in Somerset Street with its abundance of meat, pizzas and cake/desserts everywhere you looked. Breakfast at Villa Reinet with boerewors, bacon, eggs, ground coffee, pancakes and fruit makes overnighting that much better. On the last night of our Instameet we enjoyed a variety of meals such as spitbraai of lamb, beef potjie, chicken curry and venison pie from local restaurants. Definitely a reason to visit again. 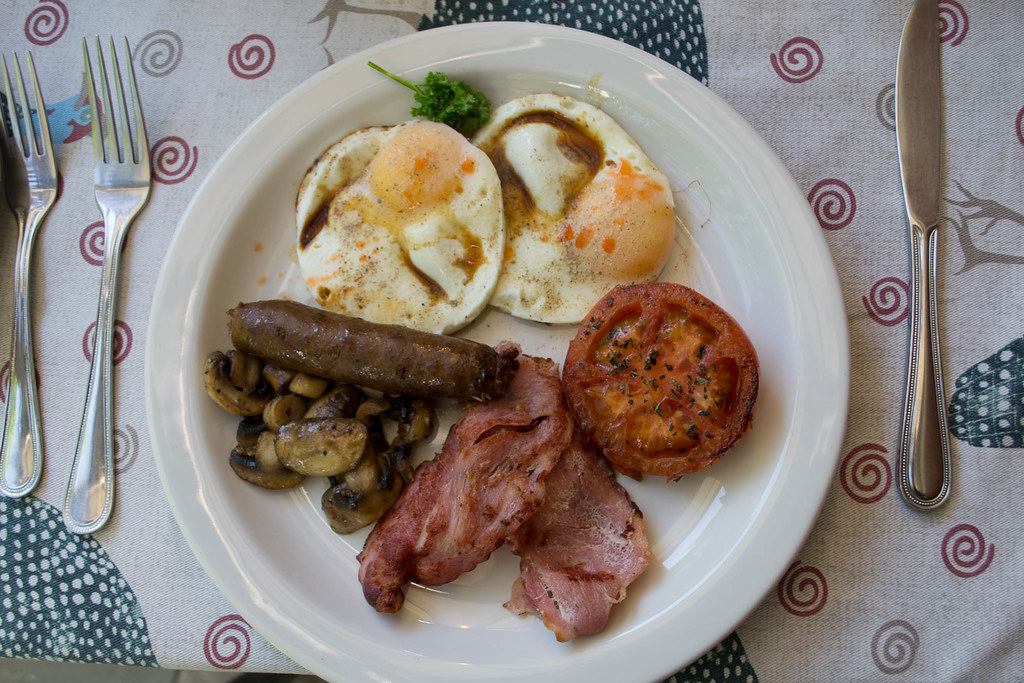 Always a story to be told and heard.

We didn’t even have to leave our guesthouse, Villa Reinet, to get great insight into the past of this town. After owning this B&B for the past eight years, Nick and Ailsa entertained us with stories of how this land was once a boys school. And a strict one at that- one where the boys were taught to grow up tough with no curtains to keep out the cold, freezing showers even in winter and regular beatings for misbehaviour. To this day, Ailsa still receives requests to visit from past students who wish to see certain rooms they had spent some of their childhood days in.

Our History Walk with resident Chantelle Marais revealed many intriguing tales of the old days when Anthony Rupert spent his days restoring properties in the town and the way the Dutch Reformed Church is the only church in SA with a chimney ( quite hidden) and fireplace which was never used. We marvelled at the original homes of abolished slaves before the Group Areas Act came into play and how residents continue to resist fracking with all the might to protect their clean water and old architectural treasures. 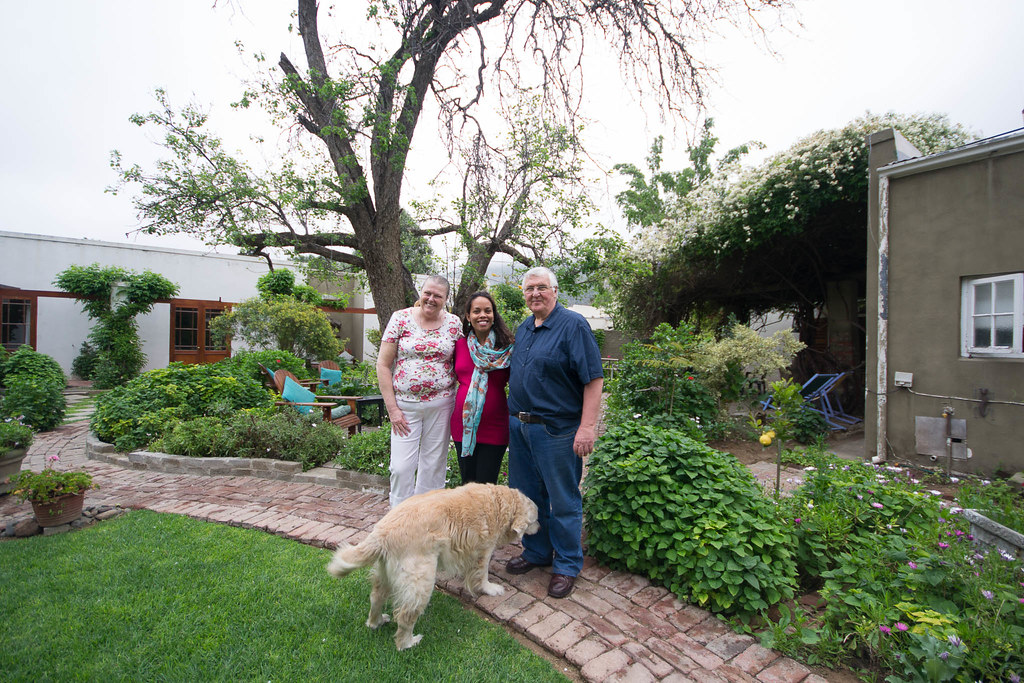 Such wonderful stories to be shared by the owners of our B&B, Nick and Ailsa. 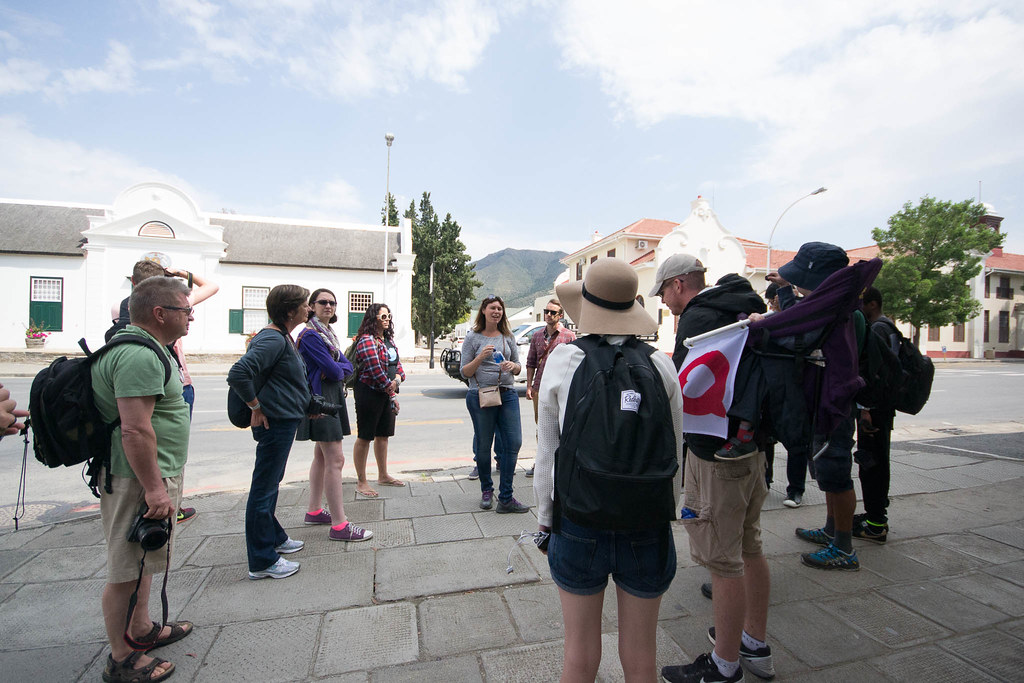 Find Chantalle Marais on Twitter @Karoo_Stories and join one of her tours around the Camdeboo.

Treasures from the past.

From the 220 green and white homes which have been declared National Monuments to the Town Hall and stately Dutch Reformed Church to antique stores in the centre of town, there are items and buildings to be preserved from the past.

I especially enjoyed visiting ‘Tannie Ira se winkel’ as referred to by Graaf-Reinet’s residents. Ira Maarsdorp has been gathering antiques at auctions in the Eastern Cape for a short lifetime and has collected an impressive house-full of everything from Chinese porcelain, to the wagon her family first arrived in to a large photograph of the Queen of England who had tea in there very tea room we stood in. If you have time, I would encourage you to sit down and ask to hear the stories of items she’s collected including the cake which is still in tact and listed in the Guiness Book of World Records. 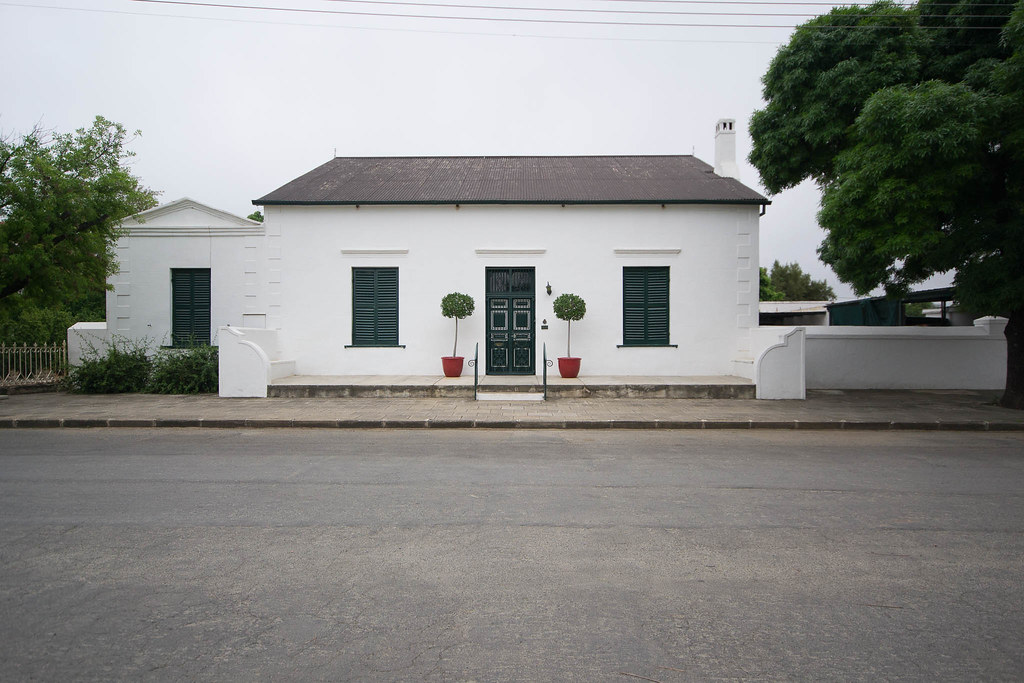 One of the 220 white and green houses which have been declared National Monuments. 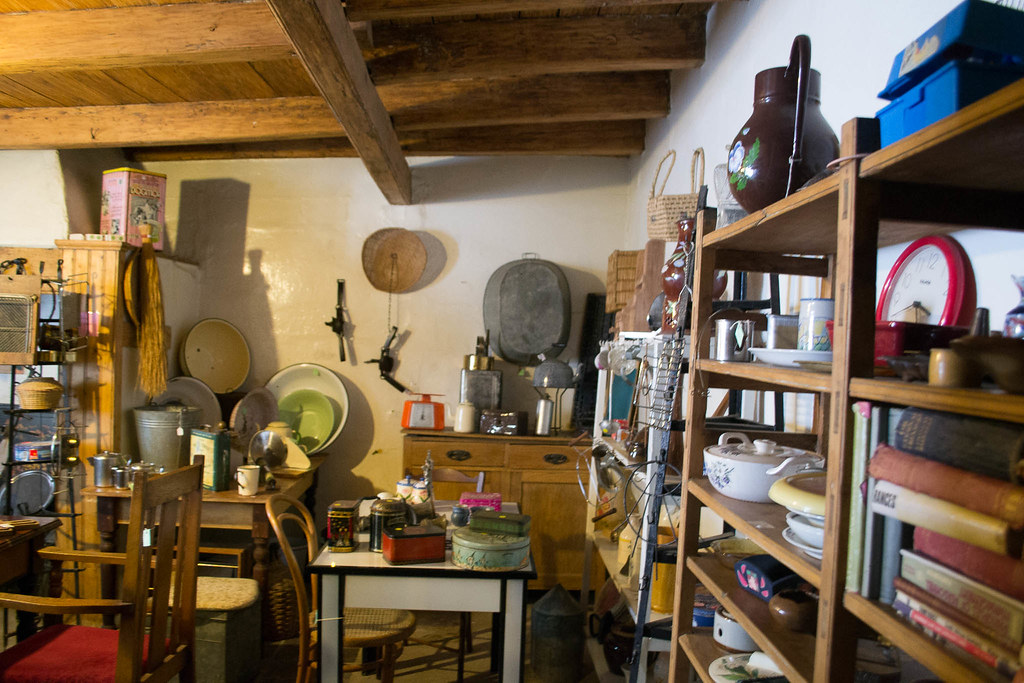 From nearby game reserves, to farmsteads and the Camdeboo Park, there is so much natural beauty to behold. Sunsets hikes up to the Valley of Desolation will bring your days to a breathtaking end and if you’re up for it, sunrise around the Nqewba dam is a wonderful way to usher in the day. Even if you’re not an avid hiker, you can drive up to the Valley of Desolation, walk up a few steps and enjoy craggy drops, karoo’s vastness and view of Graaff-Reinet from above. 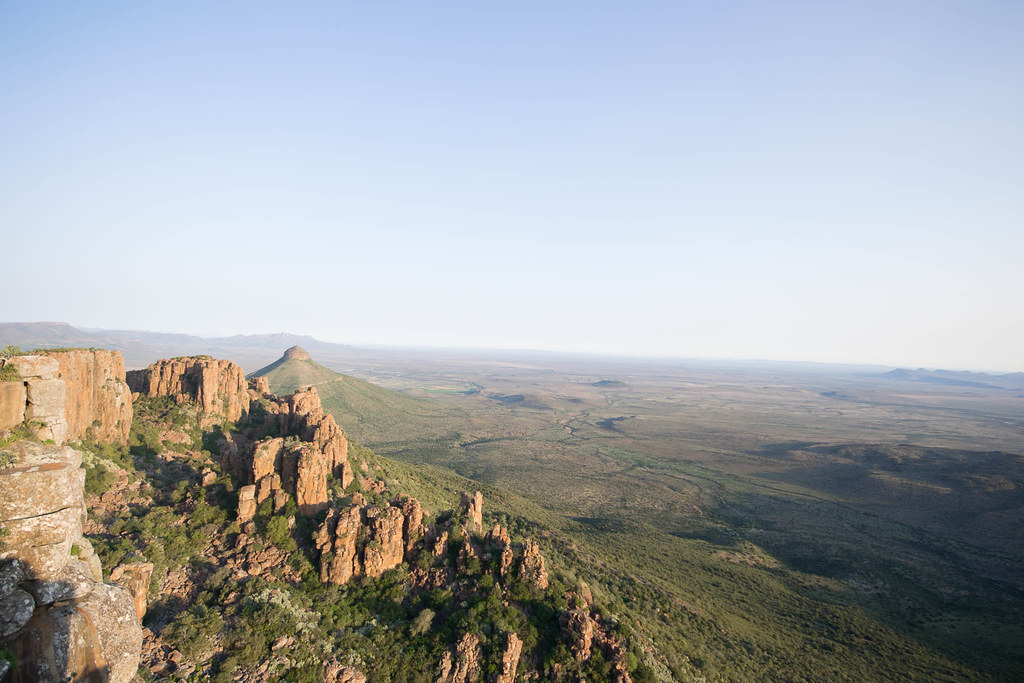 Overlooking the Valley of Desolation from a viewpoint in the Camdeboo National Park. 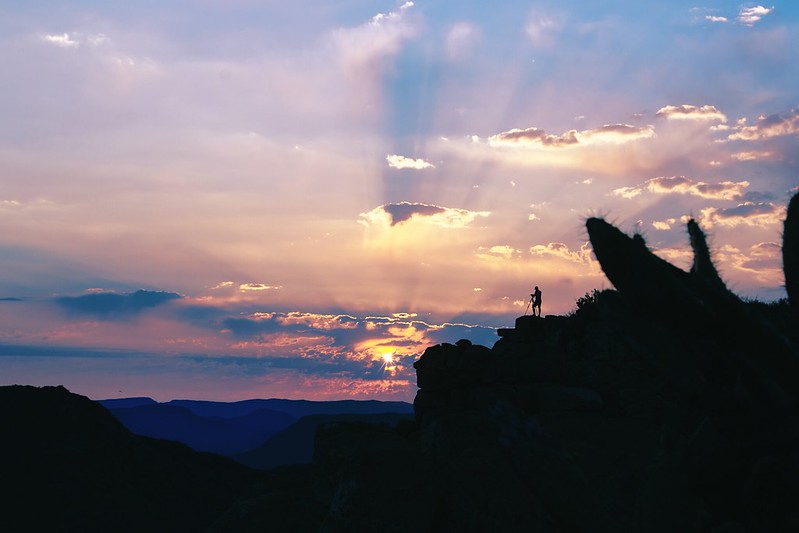 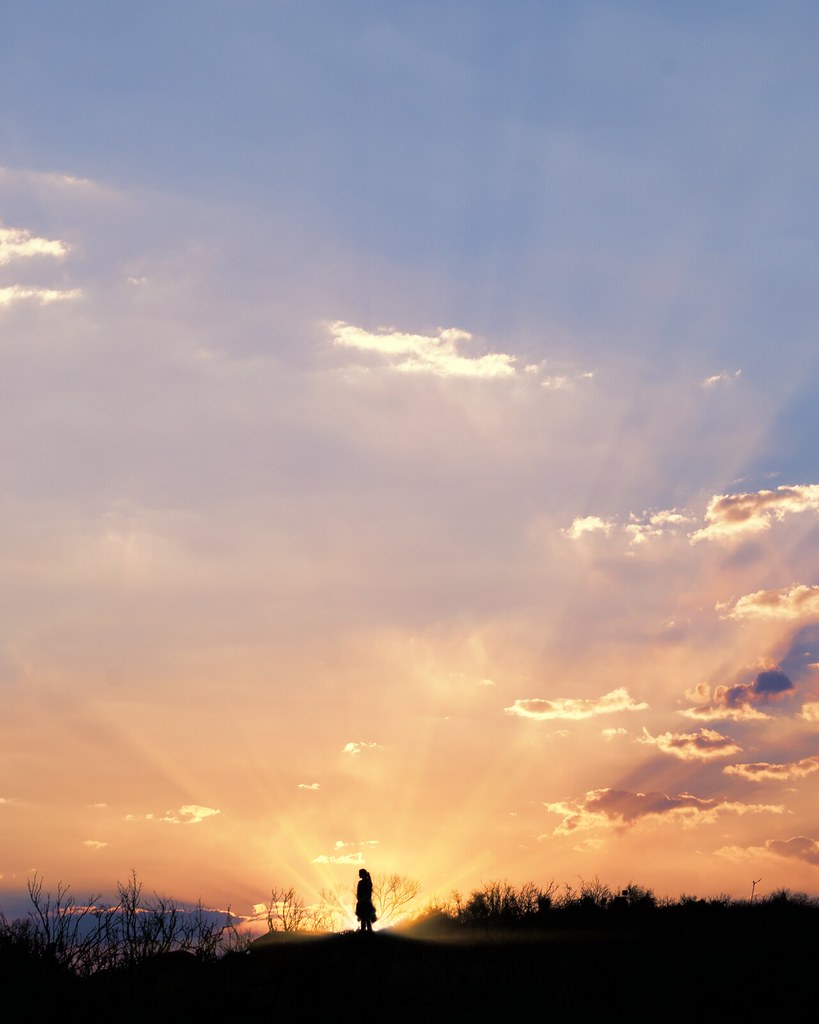 From the son of the local pastor to waiters and petrol attendants everyone in this town had a smile, story and kind words to share. The chef at Polka came out to ask us how the food was, we would get well wishing every time we filled up the car and joining a walking tour with Chantelle was a delight. We stayed at great B&B’s before, but our hosts at Villa Reinet really went to extra mile to chat to us about everything from rugby to the way they’ve also grown to love this area and the fascinating artists and stories from the Camdeboo region. Not every small town is warm, welcoming and so hospitable but Graff-Reinet is definitely is. 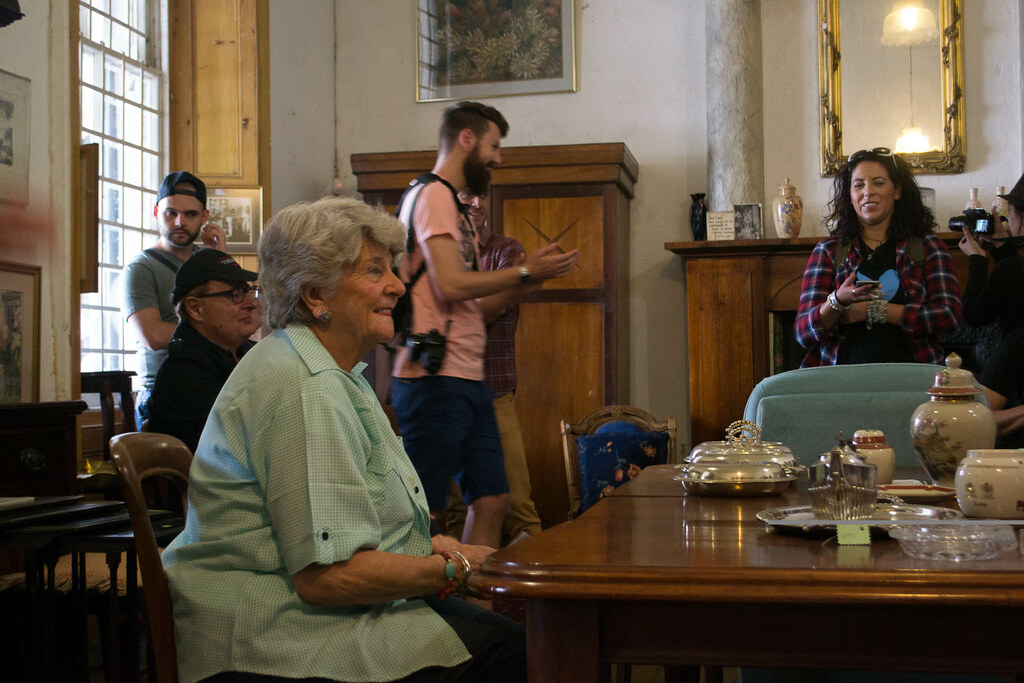 Ira Maarsdorp sharing stories of the Queen’s visit to this very room. 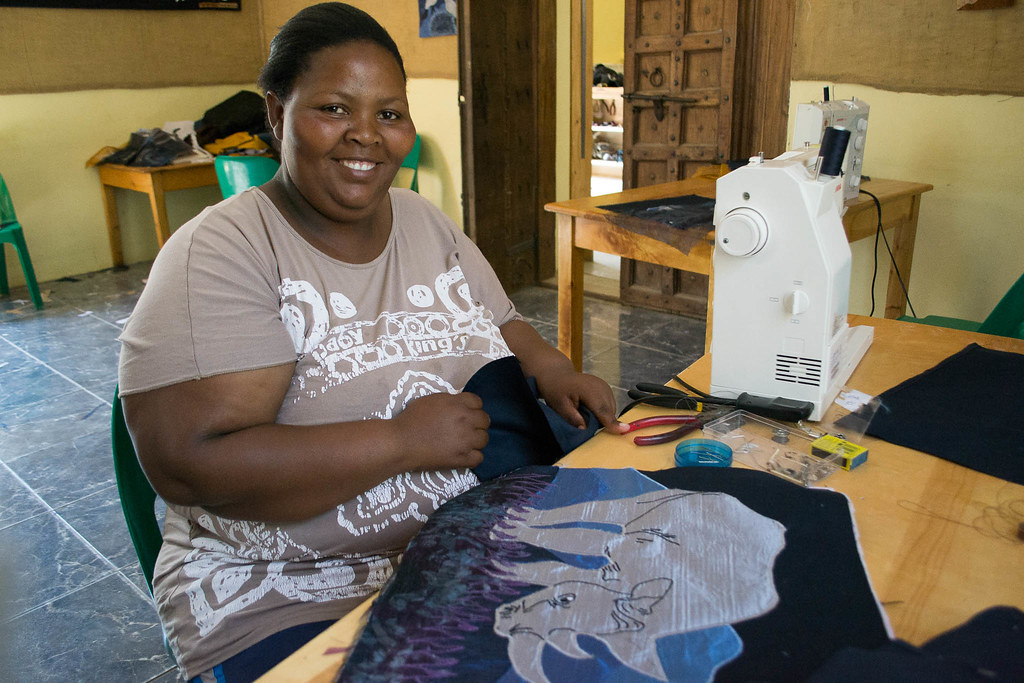 Artist Seralyne from the First People Centre in Nieu Bethesda.

All the convenience of the city with none of the traffic and all of the charm.

With unchanged dirt roads in Nieu Bethesda and lots of four way stops in Graaff-Reinet, you will get to enjoy life away from the street lights and traffic of cities like Cape Town, Joburg, Durban and Port Elizabeth. You will be able to find most things such as supermarkets, ATMs, petrol stations and debit card machines ( The last three are unavailable in tiny Nieu Bethesda), coffee shops, restaurants and clothing stores; but everything is prettier with a good helping of small town charm.

In Graaf-Reinet, you’ll find the old Gentlemen’s club which since 1994 serves lunch to women and men; corner decor stores with handmade furniture and keepsakes, modern restaurants combining farmstead flair and trendy trinkets, coffee roasters, art galleries, succulent nurseries and bakeries with the best Afrikaans desserts on offer such as koeksisters and milk tart. 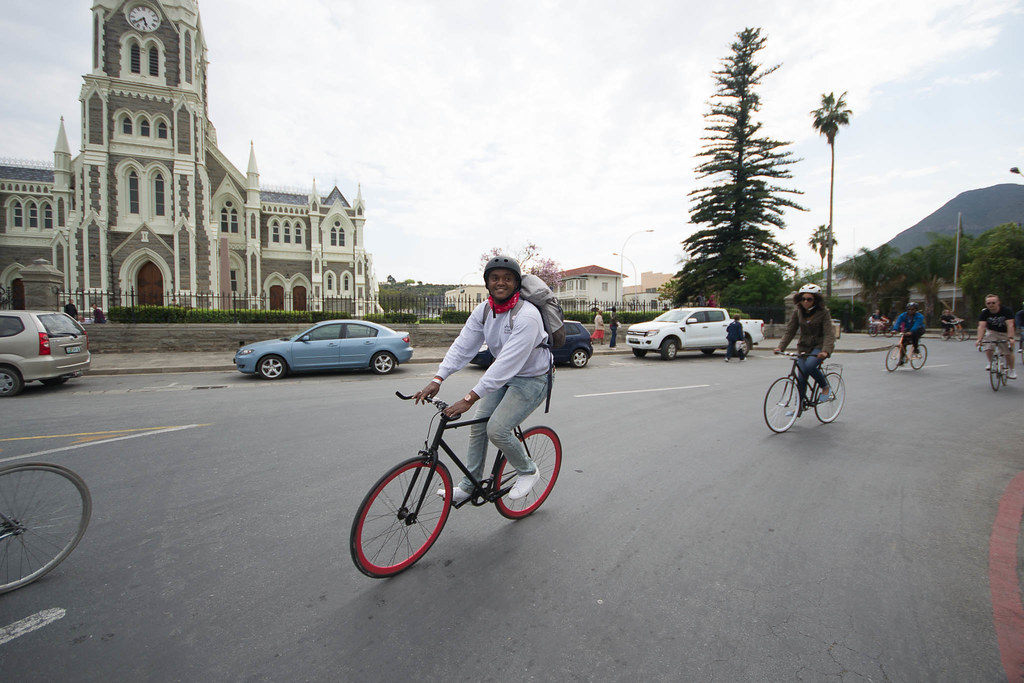 Cycling in a small town is bliss.

An assortment of pretty little B&B’s and Guesthouses.

Little towns like Graaff-Reinet and Nieu Bethesda are filled with quaint B&B’s each with their own personal touches from the owners and personalities. Far from the city’s noise, you can find solace in a garden filled with birds, enjoy home-made breakfasts on the patio, maybe watch rugby with the owner or find out all about the region and it history. And best of all you can meet fellow travellers and swap stories in passing or over breakfast- something which never happens in a big hotel. 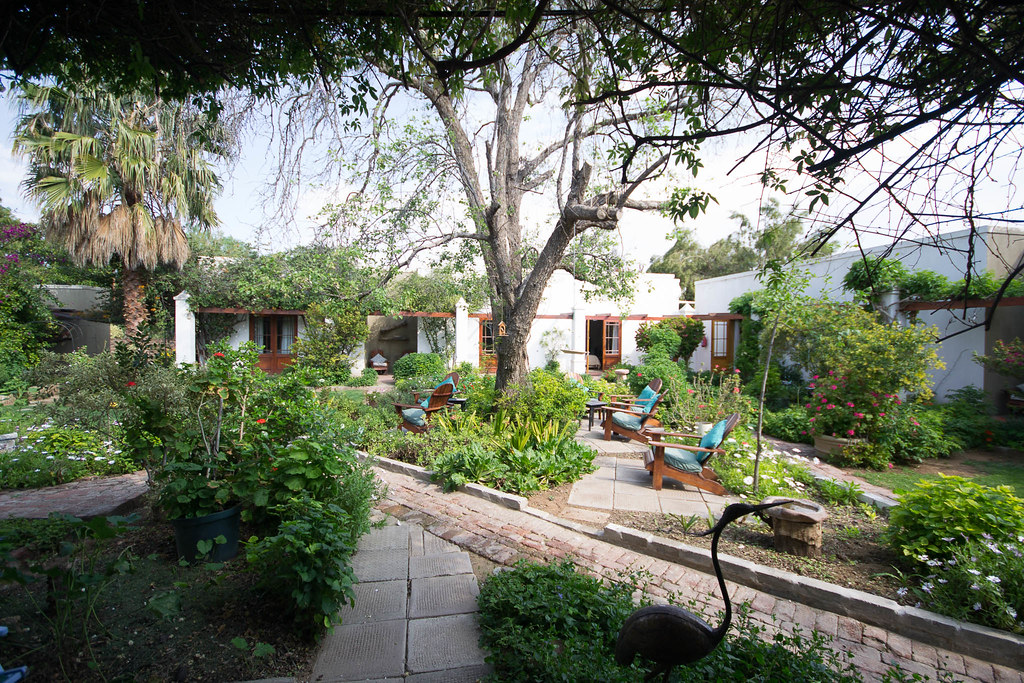 The two Dutch Reformed churches in this are of the Camdeboo form the centre piece of each community layout. Whether it’s in the soft morning light or dusk with the moon appearing over the mountain, these churches are something to behold.
The Dutch Reformed Church, also known as die Groot Kerk (The Big Church) was built in 1886 and took 18month’s to construct. Each oregon pine beam was first made before being brought here by ox wagon. The cost at the time was a whopping R36 000 and it took 1250 people to put it all together. This beautiful building remains exactly the same barring the replacement of oil lamps for lights and an upgrade to the organ from handpump to electric. This is the only church in South Africa to have its own fireplace ( which has never been used) as well as a chimney which is fairly well hidden.

The Old Drostdy Hotel with its Victorian style has a wealth of past tales hidden within its buildings as well as the adjacent Stretch’s Court( so named after Captain Stretch who bought it in 1855 and sold to many coloured labourers. Their street of houses took on the name of “Free Street” ( vrygang) to signal their freedom as slaves until they were forcibly removed under Apartheid’s Group Areas Act in 1960. To this day the street still maintains its white-washed walls with various colours of shutters and windows closely resembling the Cape Malay quarter, Bo Kaap in Cape Town. 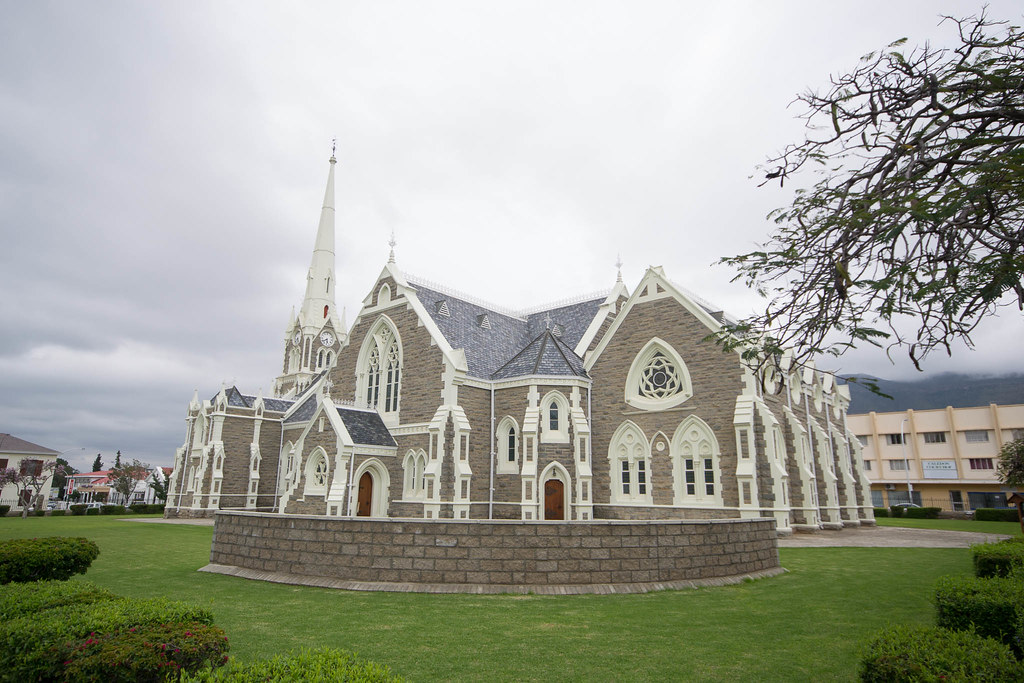 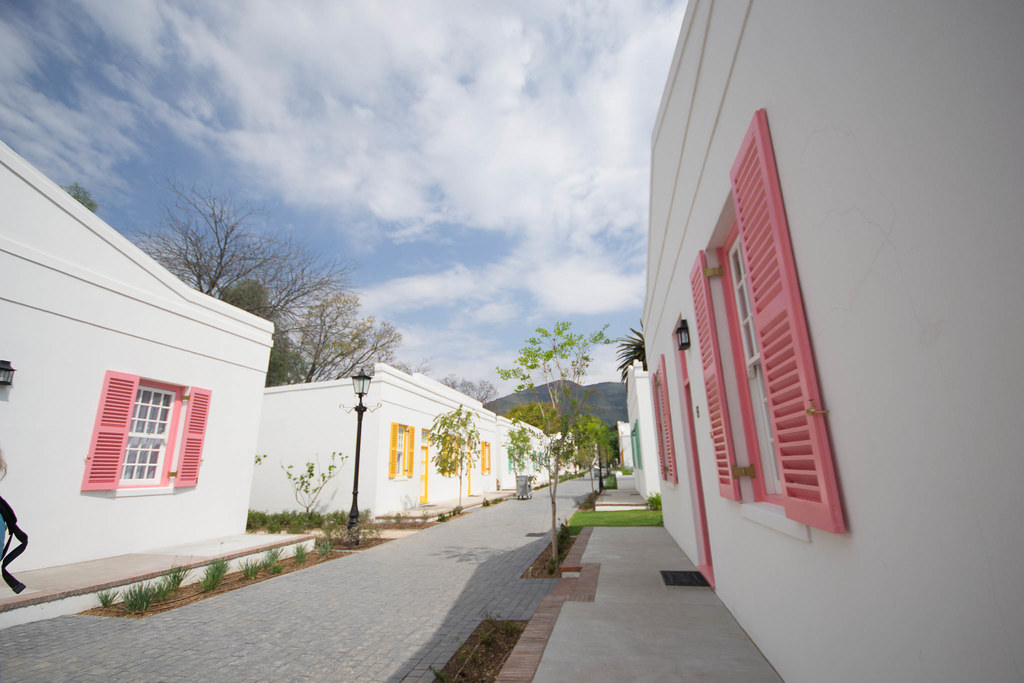 If you are keen to road trip around South Africa, visit Around About Cars from any one of their branches around the country. This is the second time we’ve used one of their cars and have loved it. They are running a special this Spring 2015 with R100 off each rental. 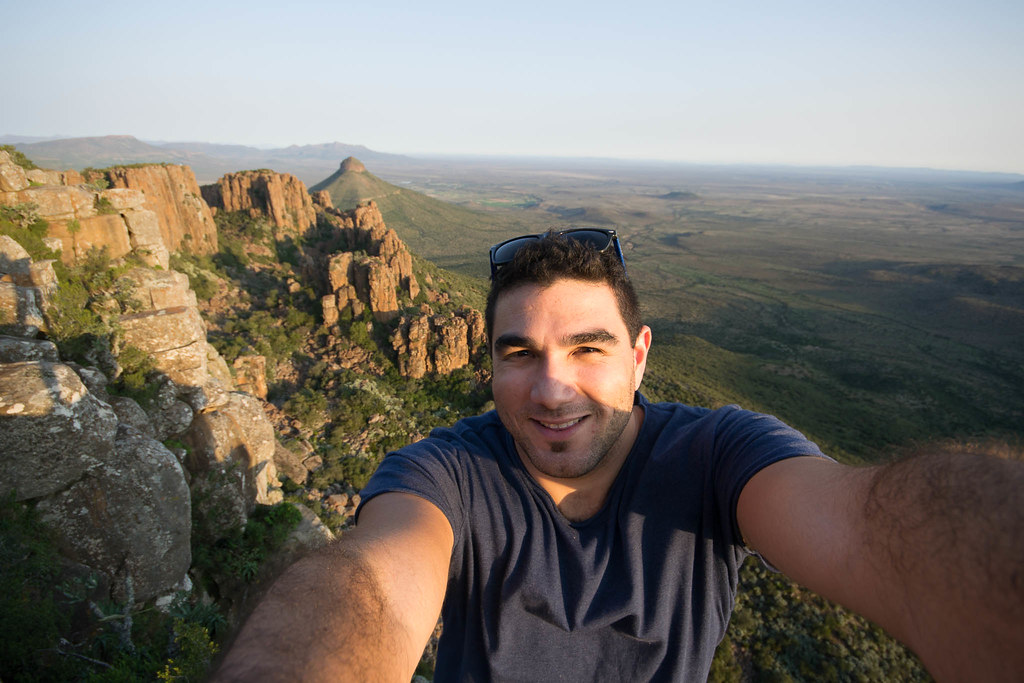 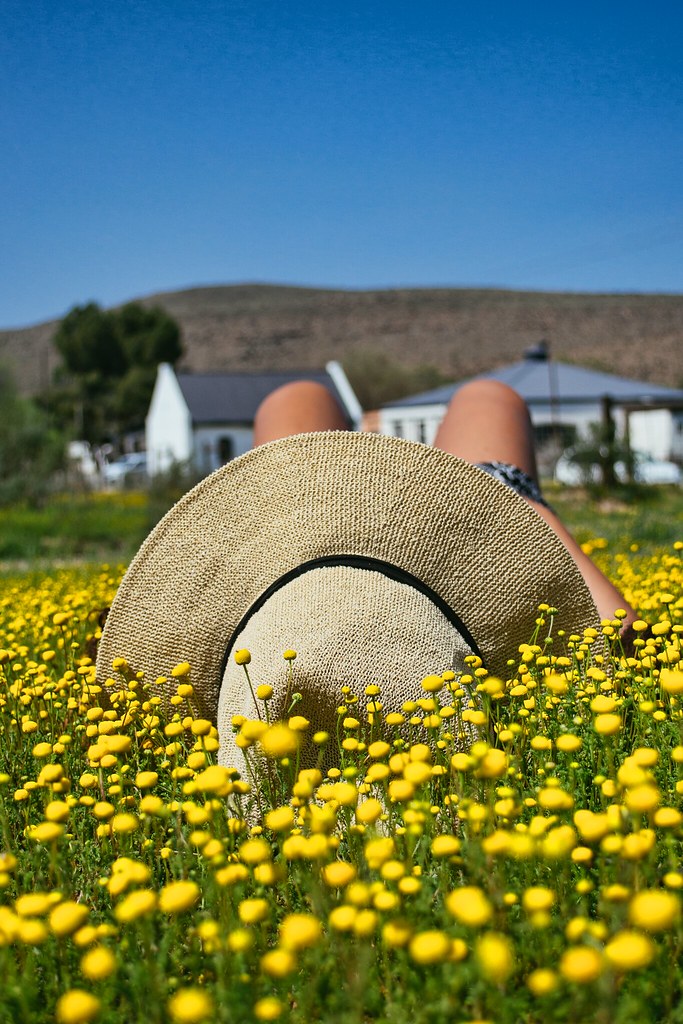 A stop over in the karoo doesn’t get sweeter!