In a time when rapid travel and technology is the norm, Lauren and Vaughan McShane relish a luxurious, slow  journey through the Karoo, discovering the beauty of a bygone era onboard the Rovos Rail… 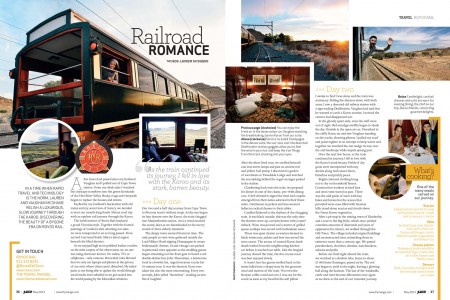 First published in Mango’s in-flight magazine, Juice, in May 2014. 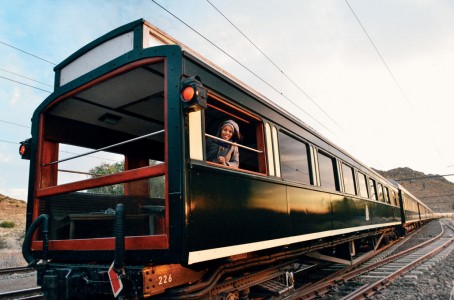 You can enjoy the fresh air in the observation car.

[dropcap] A [/dropcap] few hours had passed since my husband Vaughan and I pulled out of Cape Town station. From our sleek suite I watched the cityscape transform into the green farmlands of the Hex River Valley. Rocky crags and vineyards began to replace the houses and streets.

Fuelled by my husband’s fascination with old trains and my secret love of luxury, we decided to start our month-long South African road trip with an opulent rail journey through the Karoo.

The lavish interior of Rovos Rail emulated?a grand Victorian style. Together with the framed paintings of London’s elite adorning our suite, we were transported to an era long passed. From my bed I surveyed South Africa’s driest region beneath the lifted shutters. 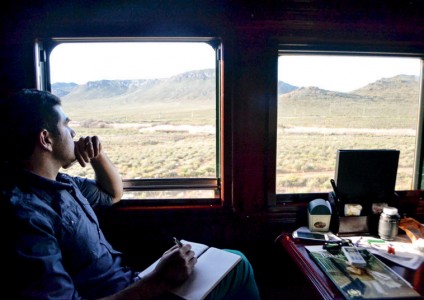 Watching the breathtaking, barren Karoo from our suite.

As we enjoyed high tea in polished leather couches on the mint carpets of the observation car, no-one was using electronic devices. No radios, TVs or cellphones – only cameras. Rovos Rail rules dictated that we only use laptops and phones in the privacy of our suite where others aren’t disturbed. My initial panic at not being able to update the world through social media soon subsided as we got sucked into the world passing by the Edwardian windows.

[blockquote cite=”” type=”left, center, right”]“As the train continued its journey, I fell in love with the Karoo and its stark, barren beauty.”[/blockquote]

Our two-and-a-half day journey from Cape Town to Pretoria wasn’t without stops. As the sun began its lazy descent over the Karoo, the train chugged into Matjiesfontein station. An icy wind mocked the sunny skies as we disembarked to the merry sound of three elderly minstrels.

The sleepy town seemed frozen in time. The only people in view were gathered outside the Lord Milner Hotel sipping Champagne in cream bridesmaids’ dresses. Grand vintage cars parked in patterned rows opposite as the wedding guests began streaming out the front gate to board a red double-decker bus. John Theunissen, a boisterous local in a bowler hat, urged everyone to join his 10-minute tour. It was the shortest I have ever taken but also the most entertaining. Every two seconds, John yelled “showtime”, sending us into fits of laughter.After the short-lived tour, we strolled beneath cast-iron street lamps and past an ancient red- and-yellow fuel pump. I discovered a garden?of succulents at Tweedside Lodge and watched the sun sinking behind the regal carriages parked in the station. 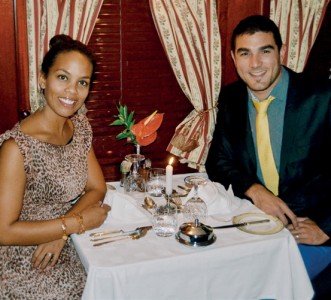 Candlelight, cocktail dresses and suits are worn for evening dining.

Clambering back onto the train, we prepared for dinner in one of the classic, pre-1940s dining cars. A bell chimed to signal the time and couples emerged from their suites adorned in their finest attire. Gentlemen in jackets and ties escorted ladies in cocktail dresses to their tables.

Candles flickered to the rhythm of the chugging train. It was black outside; this was the only time the shutters were up, curtains drawn with a tassel tieback. Wine was poured and a starter of grilled queen scallops was served with hollandaise sauce.
There was quiet chatter as waiters dressed in black waistcoats, jackets and bow ties served the next course. The aroma of roasted Karoo lamb shank wafted from the neighbouring kitchen car before it reached our table. Like the languid journey aboard the train, the five-course meal was best enjoyed slowly.

It wasn’t late but guests strolled back to the suites lulled into a sleepy state by the gourmet meal and motion of the train. Not even the Kenyan coffee could save me; I was out for the count as soon as my head hit the soft pillow.

I awoke to find I was alone and the train was stationary. Pulling the shutters down with both arms, I saw a deserted old railway station with a sign reading Deelfontein. Vaughan had said that he wanted to catch a Karoo sunrise; I noticed the camera had disappeared too. 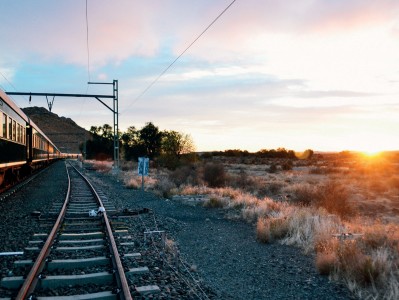 the sun rises over the deserted Deelfontein station

In the ghostly quiet aisle, even the staff were out of sight. Red smudges swiftly began to shade the sky. Outside in the open-air car, I breathed in the chilly Karoo air and saw Vaughan standing on the tracks, shooting photos. I pulled my scarf and jacket tighter in an attempt to keep warm and together we watched the sun nudge its way over the arid landscape while impala sprang past. 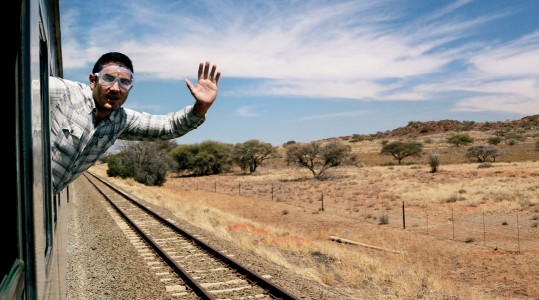 Goggles allow you to feel the wind in your hair and keep the iron filings from the track shooting into your eyes.

Over the next few hours, as the train continued its journey, I fell in love with the Karoo’s stark beauty. Fields of dry grass were interspersed with tiny shrubs along with sweet thorn, bitterbos and prickly pears.

Bright-coloured clothing hung out to dry on household fences. Construction workers in hard hats and neon vests waved us past. There was the odd patch of lawn with hay bales and horses but the scenes that prevailed were ones filled with faraway hills, stand-alone acacias and clouds above the Nama Karoo vegetation. 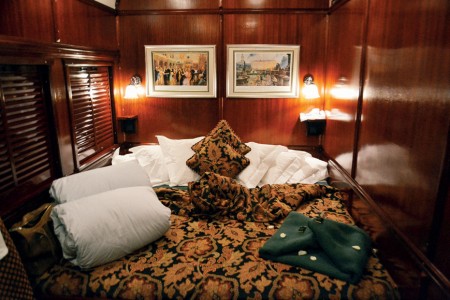 Inside the deluxe suite.

After a pit stop in the mining town of Kimberley and a tour to the Big Hole, which once yielded countless amounts of diamonds and years of oppression for miners, we walked through the Old Town. The village included original buildings and reconstructed ones, mimicking those in existence more than a century ago. We passed pawnbrokers, churches, dentists, watchmakers, saloons and pubs.

Before our final night aboard the train, we watched as a shallow lake, home to about 23 000 lesser flamingos, passed us by. The red sun began to yield to the night, leaving a glowing ball along the horizon. The last of the windmills, cattle and trees became silhouettes once again as we drew to the end of our romantic journey.