As the name suggests this is a swim that involved jumping into extremely cold water in the middle of South Africa’s winter.  Do not for a second get confused- I was not one of the crazy people to actually place even a single limb into Clifton beach’s icy water, but there were many who did and I was there to observe it all and take photos.

In the heart of summer, when the the heat is scorching and I have no other option but to cool off in the Atlantic ocean, I will do so.  My ankles numb after less than 3 minutes, but the swim is nevertheless refreshing only because I know once I step out the sun will dry me very quickly.  On this Saturday morning, this was not the case.  Luckily it was not raining, but I was in a warm jacket with a scarf and beanie whilst many surrounding me were either in speedos ( scary on so many levels), full-piece costumes and bikinis.  Many people usually refuse to go onto beach in their pale, unsunned state for fear of blinding others with the glare of their translucence.  This was not the case now and I’m proud to say that everyone took off their kit without  a worry that everyone was looking at their winter skin.

To be totally honest I’m not sure why this event happens, I know it’s partly to do with welcoming the winter Solstice.  I say fly a flag, roast marshmellows and watch the moon, but swim in icy water, um not thanks.  When the time came to strip down and run towards the waves, some participants knocked back some sherry, posed for numerous photographs and waiting in a line before the signal.

They all started running ‘ baywatch’ fashion into the water, but soon slowed down tremendously by the shock of the water’s temperature.  Somebody would’ve had to pay me to do this and it would’ve had to have been a substantial amount.  Some came out very soon after wading in up until their knees, whilst others went full tilt and swam out until a rock far away.  My boyfriend and friends cleverly kept moving with a ball as entertainment and swam around for the full 30 minutes.

It took them another 30 minutes to actually heat up once they were out.  Scarves, gloves and beanies were put on, coffee placed in hands and more sherry was knocked back to encourage heat back into their bodies.  I was oh so content and warm behind my camera lens sipping some coffee from the beach.  Who knows, maybe next year I’ll be adventurous and insane and try it out.  Or not. 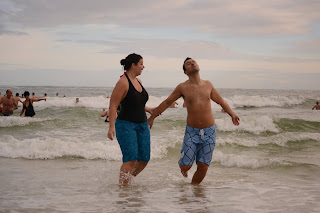 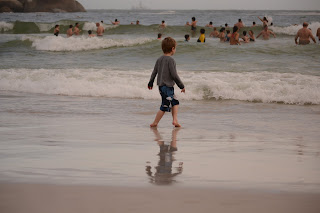 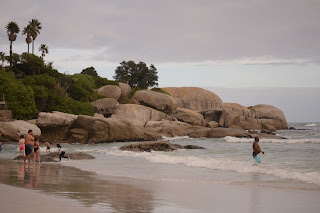 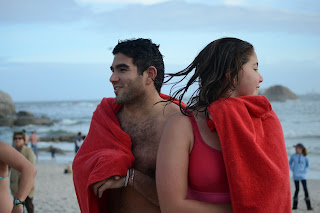