Amidst the chaos of Bangkok city lies the calm of Lumpini park. Positioned in the trendy Silom neighbourhood, you’ll pass upmarket hotels, massage parlours and restaurants to get there but the walk in the humidity will be well worth it. I felt like I had transcended into a tropical oasis where residents came to exercise, relax and enjoy a bit of green in an otherwise grey cityscape. Elderly citizens did Thai Chi, countless amounts of women did an aerobics class and giant monitor lizards swam in the lake. Familes took paddle boats out on the lake as the sun sunk below the skyscrapers and everyone stopped what they were doing when the National Anthem played. If you’re wanting to escape the loudness of the city, sit on a bench or walk in a serene garden, visit Lumpini Park (Silom MRT stop). Here’s some of the images I captured of everyone going about their day… 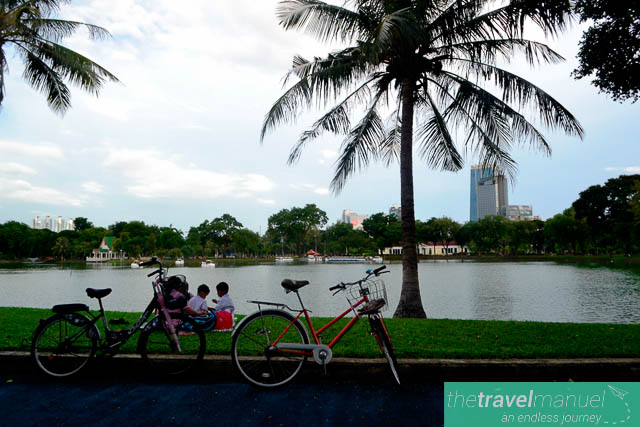 Families relaxing beside the lake. 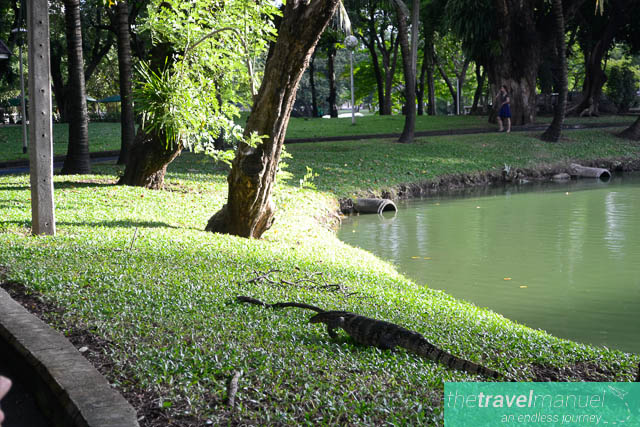 A monitor lizard moving out of the water and onto the grass. 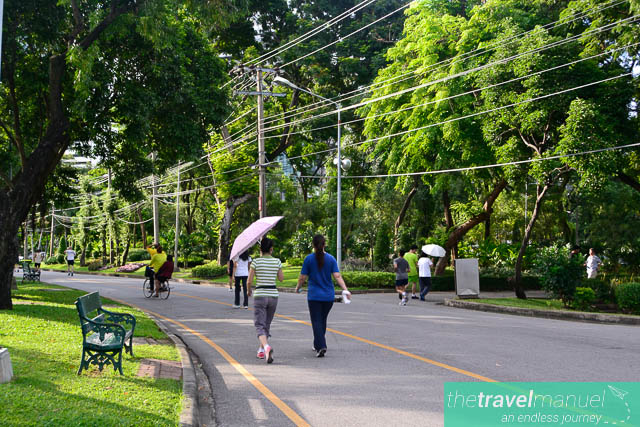 A place to walk, run and cycle. 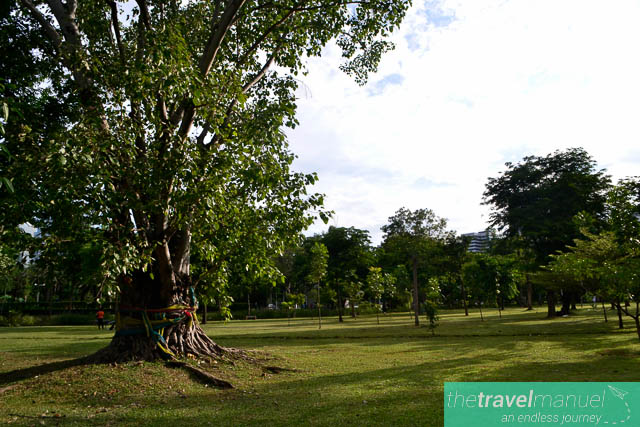 The Thai colours for each day of the week…wrapped around a tree. 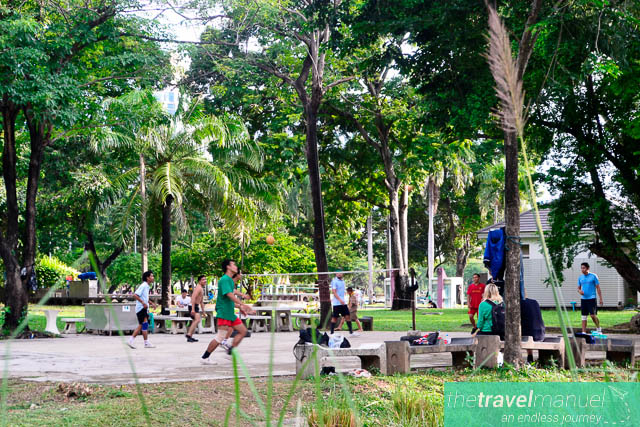 Guys kicking a small ball over the net. 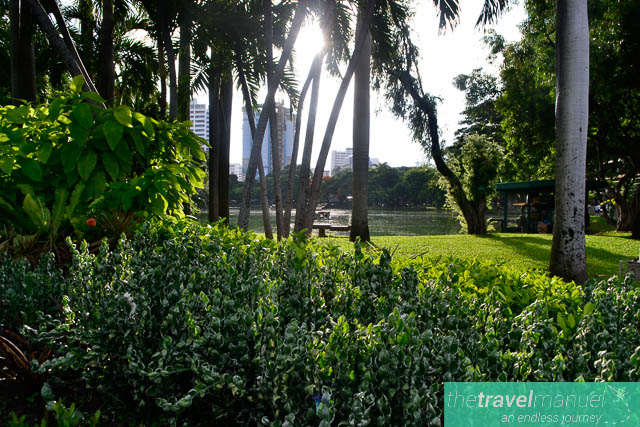 The tired sun disappearing into the green. 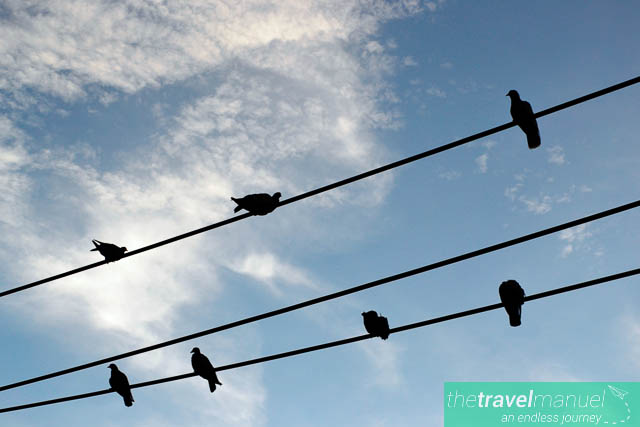 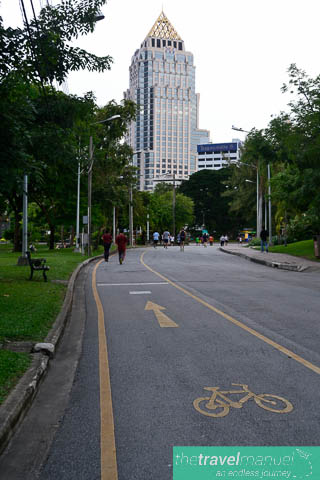 Lanes just for the cyclists. 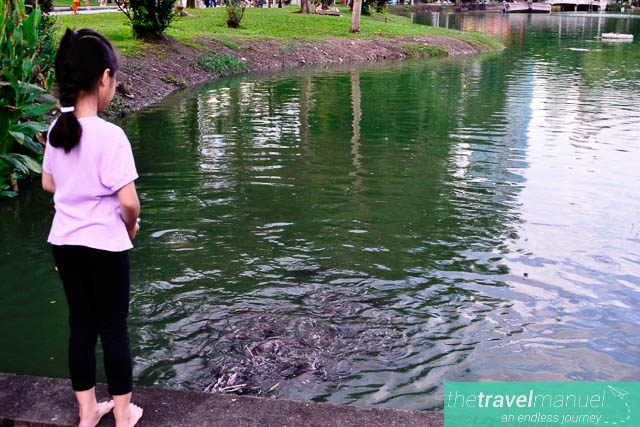 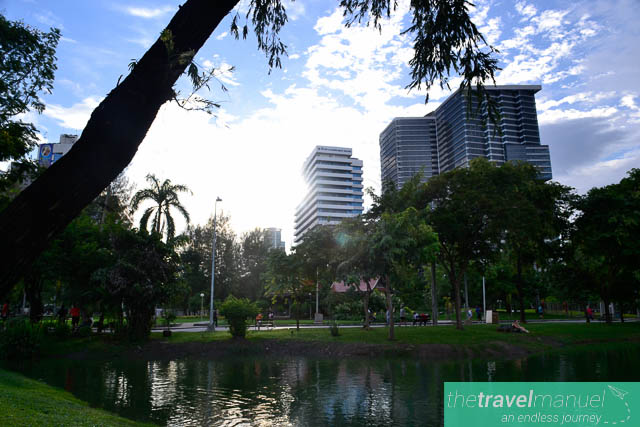 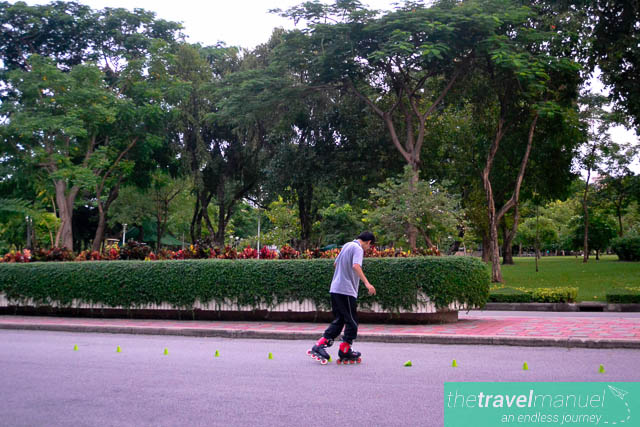 A rollerskater weaving backwards through obstacles. 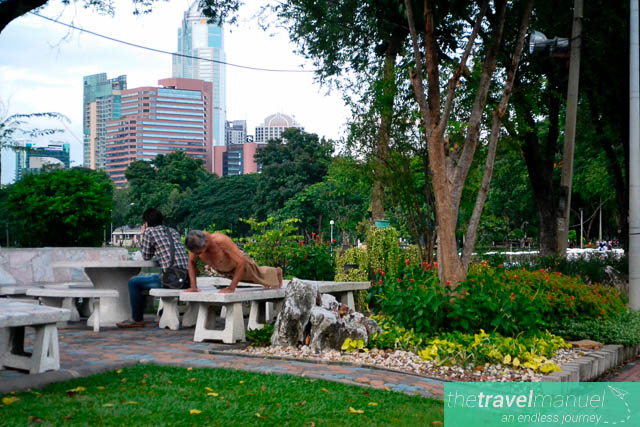 An elderly man doing push-ups on a bench. 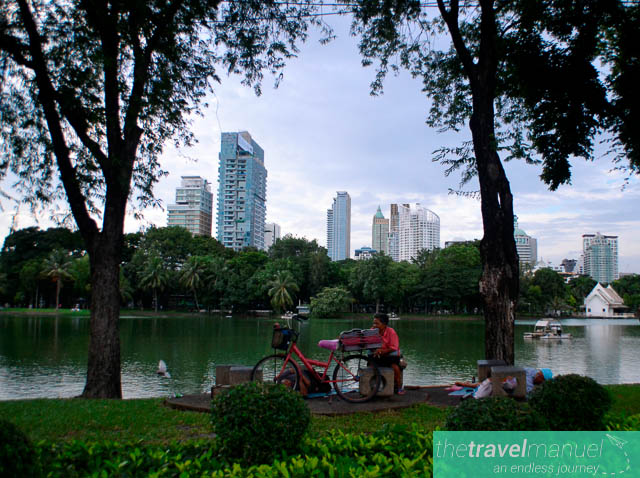 A woman relaxing on a bench with Bangkok skyscrapers in the background. 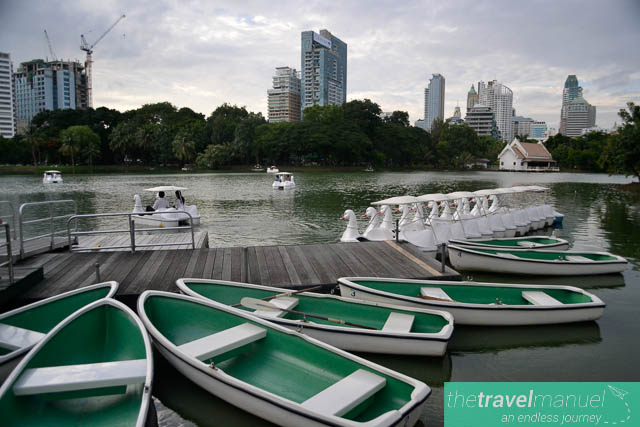 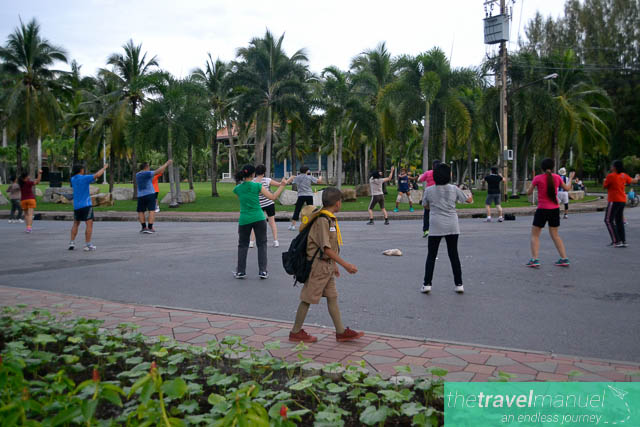 A school boy walks past an aerobics class. 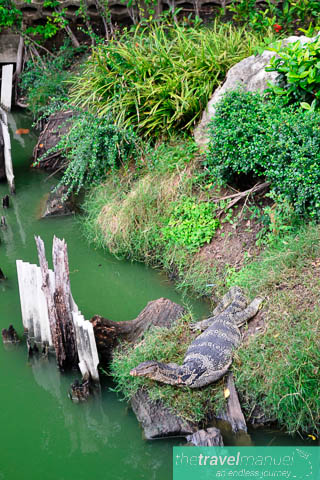 A monitor lizard that swims in the city’s waterways and lives in the park. 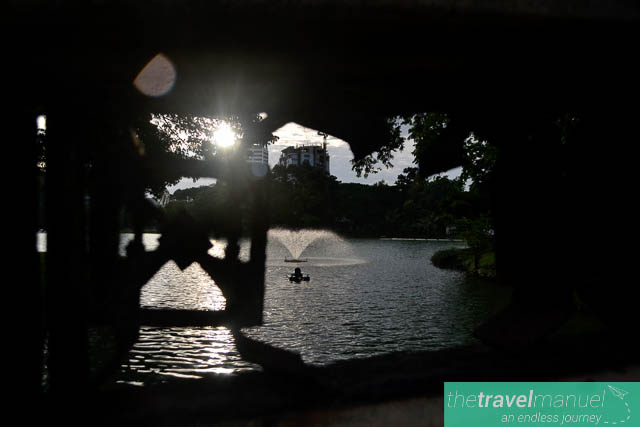 A fountain and sunshine. 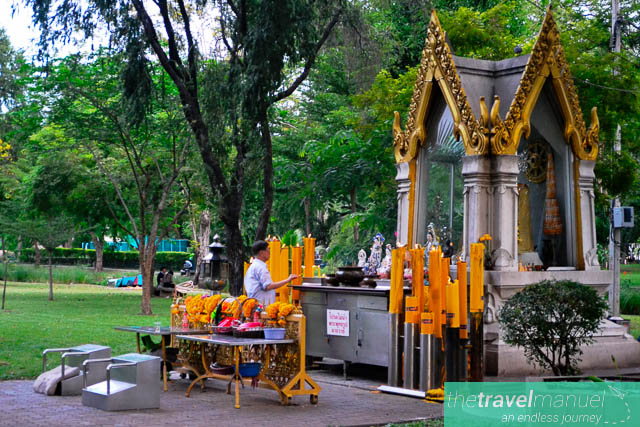 A man lighting candles in front of the buddha statue. 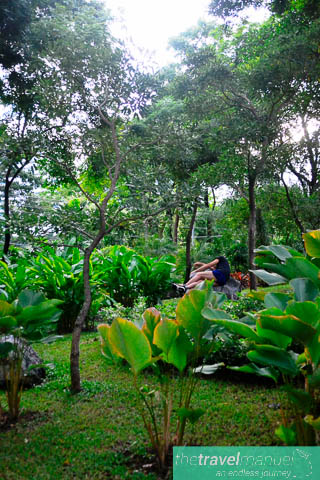 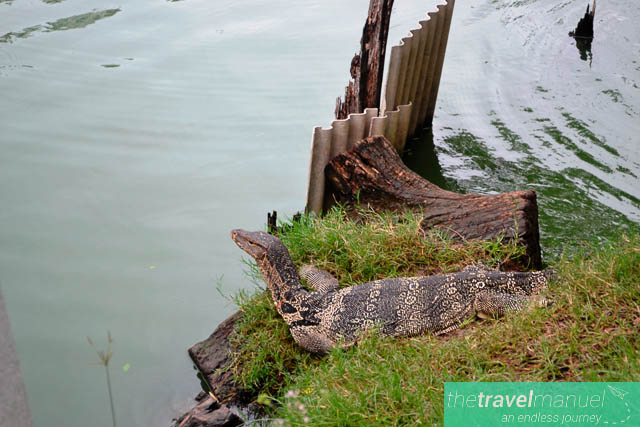 A giant monitor lizard lies on the edge of the water. 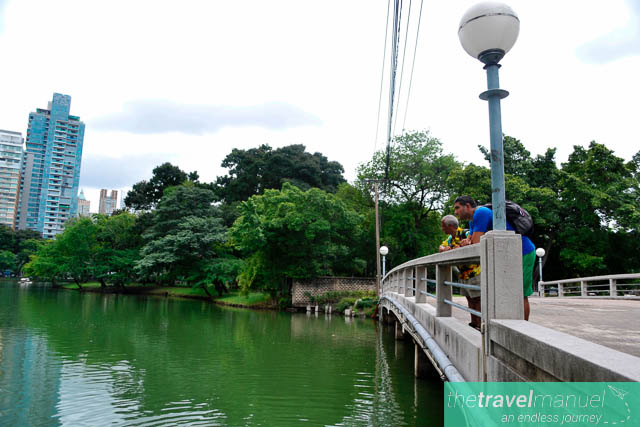 Vaughan and my Dad on the bridge. 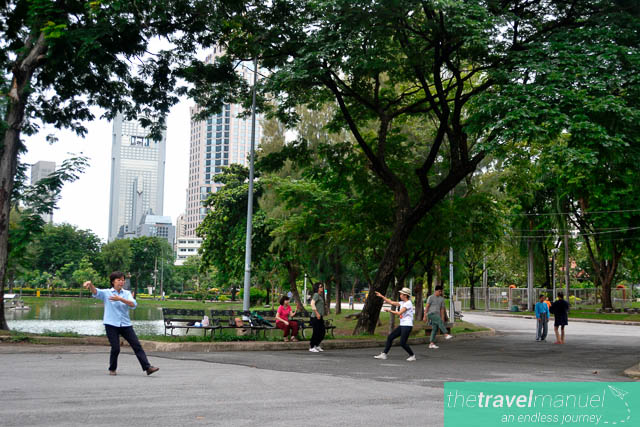 Thai chi in the park. 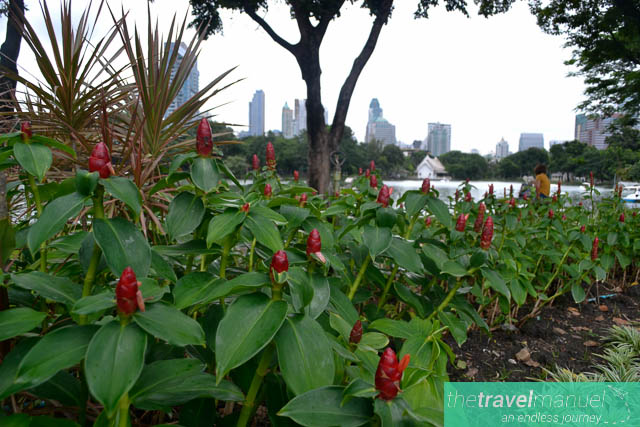 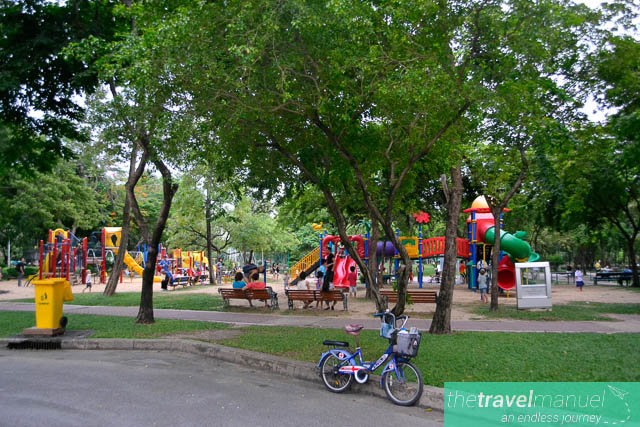 A playground for the kids. 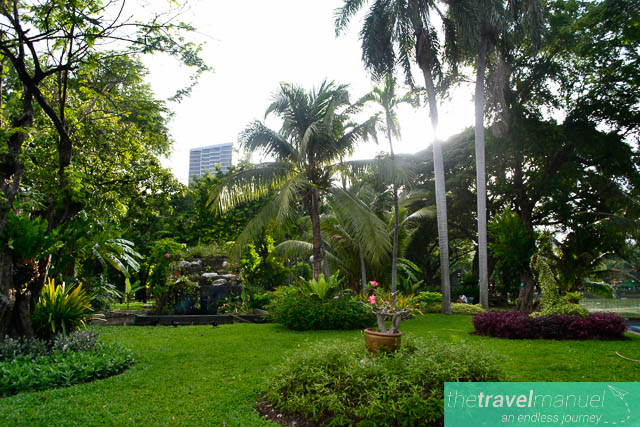 A garden of green. 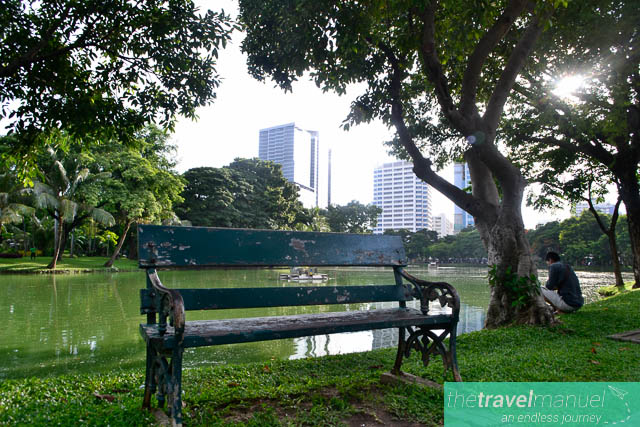 Benches to take a breather.