After hiking up to Kettle Spout waterfall and wandering down a steep path to see the Madonna and Child Waterfall, I had completely fallen for Hogsback and its strong resemblance to the Lord of the Ring’s ‘Shire’. However I wasn’t sure I was ready to tackle this Shire on the back of a mountain bike. It had been a good years since I was on one and even then, it was on flat tarmac roads. I decided however that it was time to get back in the seat so here is my version of what it’s like to go mountain biking in Hogsback, South Africa. 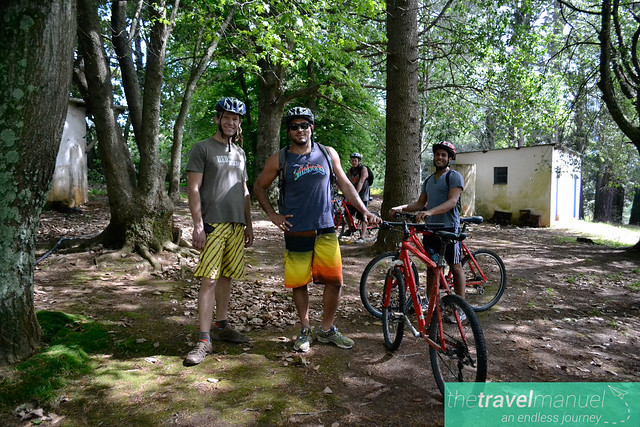 Our fearless leader and owner of Hogsback Adventures, Neels, led our eager group of five from the Hogsback Arboretum beneath the bright red Chinese Maples, old Yellowwoods and oak trees. I ducked beneath an overgrown fuchsia bougainvillea bush to reach “39 Steps,” the first of nine waterfalls we would see that day. 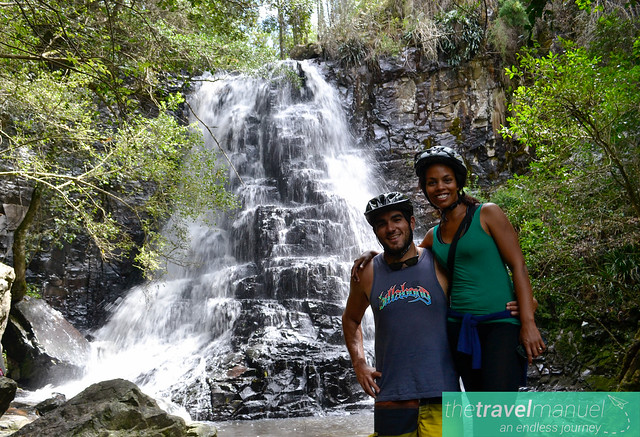 Along the trail we were surrounded by enchanting green hues; forest green in the Hogsback plantations, lime green in the oak trees of the arboretum and the rich emerald tones of the valley below as we looked toward the Kettle Spout Waterfall. On windy days, its water is said to blow upward and spray upward as if from the spout of a kettle.

The sandy road soon morphed into a graveyard of pine needles and pine cones that taunted me with their ability to send my front wheel skidding off track. Pine trees stood tightly together climbing towards the sky in unison, allowing long shards of light to fall in between the green canopy they formed. These woodlands are so fragrant and alive with birds singing amidst the trees and insects buzzing about their days. As we stopped to breathe and munch on apples, the plantation seemed endless and the depth of this magical forest untold… 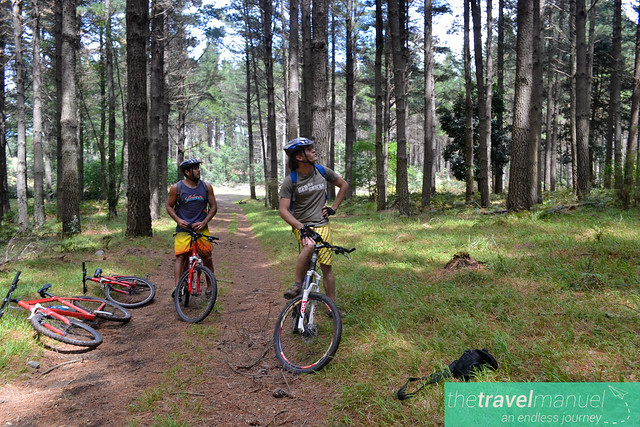 My entourage of males zoomed off to the other end of the forest and all I could hear was a faint “careful on this downhill”. Whilst I looked around, clueless as to what they were talking about, I was suddenly on it. My bike seemed to know what to do, but my heart jumped into my throat as I looked down and felt the speed my bike was reaching. The guys stood at the bottom watching me fly down. In a panic I clutched both front and back brakes, but continued speeding downward over stones, pine cones and twigs all the while my arms and upper body shuddering from the impact of the tyres hitting the track. I had survived the first downhill of many and I was ecstatic.

We swung right and set our bikes down on the grass between the brambles and walked down alongside a gentle stream looking at tiny frogs on the slippery rocks. We were instructed to take off our shoes and form a human chain across where the water began to flow quite strongly over rocks. 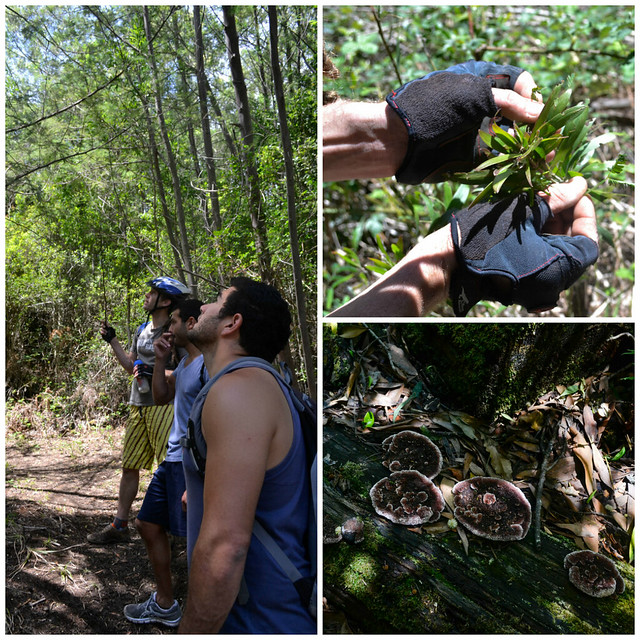 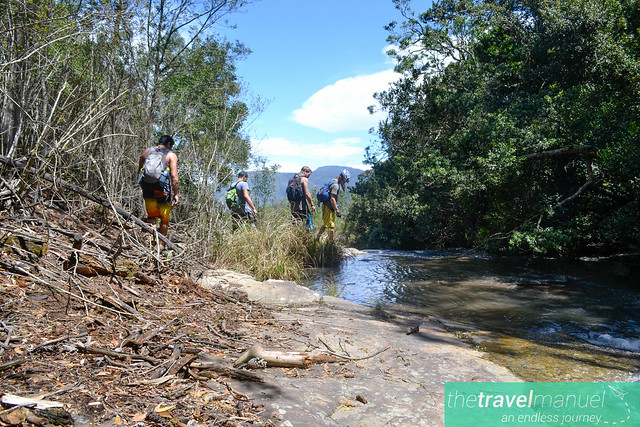 Leader Neels somehow cemented his bare feet, amidst the flow, on a boulder and helped each of us across. We climbed down a rock or two and before I knew it I was standing at apex of where the water went gushing over a short ledge into the depths below. We were atop the famous Madonna and Child waterfall, with nothing but sheer mountain cliffs, air and a vast canopy of trees layering the earth beneath us for company. 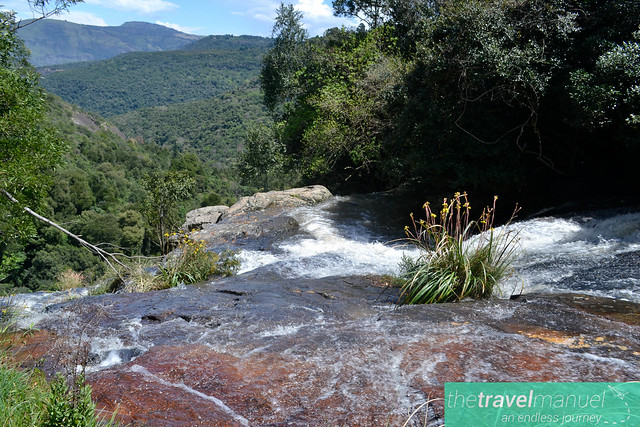 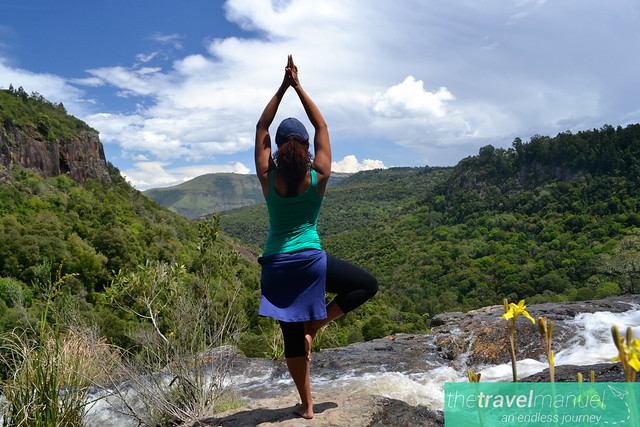 I fell down (intentionally!) on the soft grass along the banks of a lake and rested while silently mesmerised by its tranquil beauty. Nothing seemed to move beneath its languid surface and a sparse collection of trees formed the only obstacle between the undulating mountain and its waters. Other than a motorcycle and a Toyota Hilux bakkie, there was nothing else moving along these forgotten dirt roads. 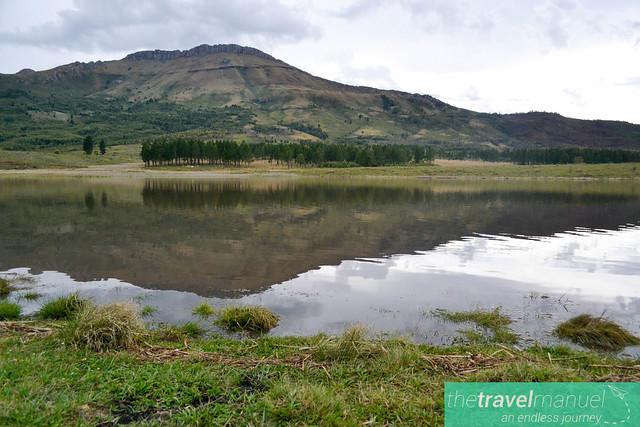 About three hours into the trail, I ate my lunch and gazed into the lake, not thinking about the single-track we were about to face, “Puff Adder”. It is supposedly the easiest track Neels has built here in the mountains, but judging from my jelly legs, the hilly trail we had already covered and the fact that’s named after a snake, I presumed that ‘easy’ was a relative term. 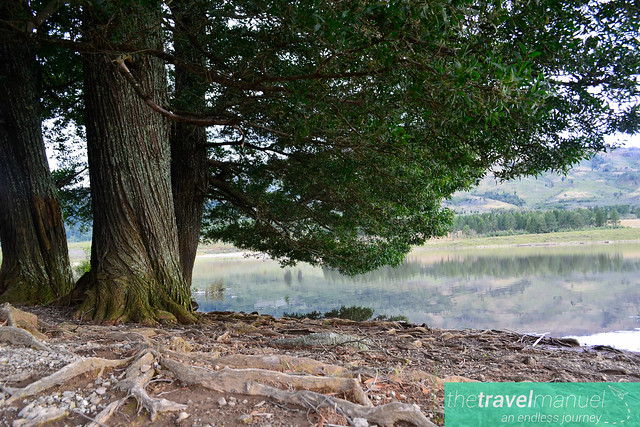 As we veered left into a wooded area, the wide road disappeared and was replaced by a single, narrow slither of a track. Again, I heard shouts of caution from the pack ahead that sent my heart pounding and my hands clasping at the breaks.

It grew dark in the shade of these trees and, out of sight from the grey clouds, I moved tentatively over large exposed roots and down a short, steep incline before reaching a rapidly flowing river.

I took one look at the speed of the water, pictured it washing me away, and slowed to a crawl, right at its edge. This however proved to be a bad idea as my shoes got completely soaked as my mind kept telling me to do the opposite of what I was meant to do (pedal like crazy!). I eventually got across only to find a hill. With the conquering of the river rapids still fresh in my mind I decided to choose my battles from now on and pushed the bike up.

Back on the bike, my tyres slipped on the moist pine needles as a field of ferns appeared on the slopes beside us. This was the all encompassing green which seem to illuminate the entire forest. 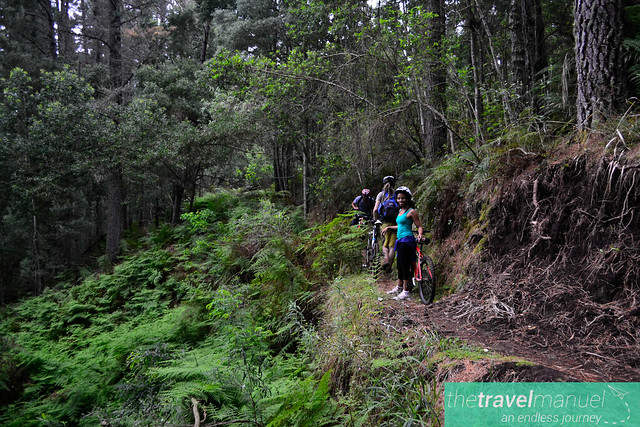 For the last 45 minutes of the five hour trail, I pushed my bike along the edge of the mini-cliffs, up hills and cycled where it was easy. Unlike my tired thighs, the views of Hogsback never once disappointed. The clouds shape shifted to form various, magical arrangements in the sky and the trees showed a different face with each turn of the track.

It was the single most beautiful and grueling track I had ever navigated and I would do it again just to immerse myself in Hogsback’s enchanted groves. Even more rewarding than not having to sit my bruised buttocks on the seat once more, was returning to Away with the Fairies Backpackers where they’d lit the fire to heat a hot bath for me perched on a precipice overlooking an endless wilderness below. 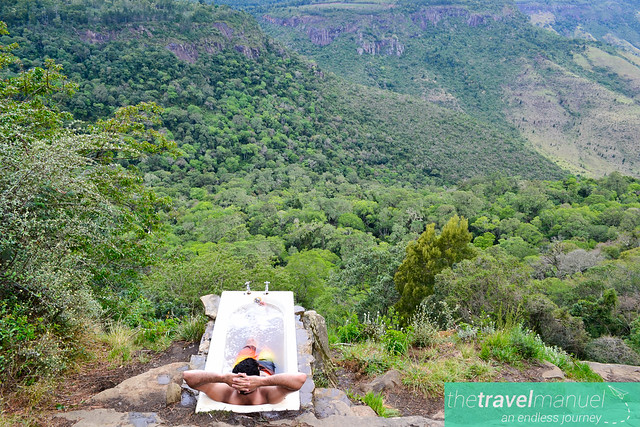 For more information on guided mountain bike trails, hiking and abseiling in Hogsback, contact Hogsback Adventures on +27 74 721 4885 or email hogsbackadventures@gmail.com Neels proved not only to be an incredibly gracious guide but also an absolute wealth of information. We loved and learnt so much out there with him.

Away with the Fairies is one of Hostelling International South Africa’s backpackers. Visit their website for info on more rocking hostels around the country. 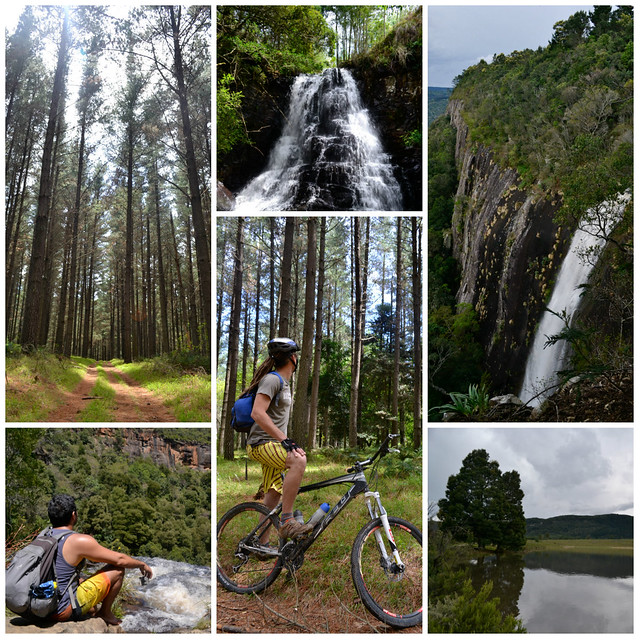