Recently we joined one of Lauren’s schools on an outing (or day-trip) to one of Johor’s best attractions (at least for kids) – Legoland Malaysia! When I say “kids” i’m totally including myself 🙂 We had so much fun there and took sooo many photo’s that I thought i’d write a blog post about it.

At the time of writing tickets for foreigners cost RM 140 for just the Theme Park or RM 105 for just the Water Park. But forking out RM 175 will get you access to both for the day – definitely worth it if it’s a hot day. There are also different prices for seniors and children under 12 so check out the website for those.

Back home South Africa, where the cost of living is a fair bit higher than here in Malaysia, few, if any, themes park charge this much for a day of fun so I had no idea what to expect – except that it had better be worth it. Legoland has practically been built on the border of Malaysia and Singapore though so I suspect that their pricing system has been calculated with that mind. 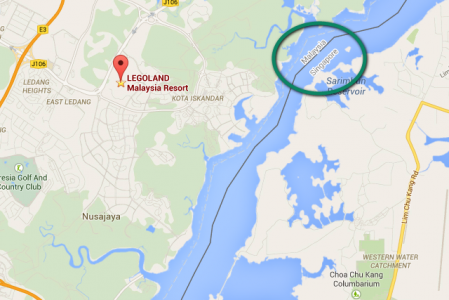 Anyway, Lauren keeps telling me not to convert prices all the time so I just went with the flow and handed our money over. We decided that since we weren’t going to be there for a full day we would just get the Theme Park access. (RM 140 each for us “Non-Malaysians.”)

Getting to Legoland Malaysia

The directions provided by Google Maps to Legoland work perfectly and though I know that Malaysia’s is more of a Waze country than a Google Maps one – I figure that Google owns Waze so therefore they work the same – which probably not true – but I’m stubborn. The point is that Google Maps work just fine.

Just smash “Legoland” into your Google maps or Waze or whatever GPS you fancy and you are sorted. For us the drive was just over two hours long (coming from Mersing) and by the time we got there we were pretty excited to get inside.

Legoland Malaysia is definitely worth it!

As a blogger I’m supposed to leave my conclusion to the very end, to try and keep you reading, to keep you glued (anything more than a minute these days) to my website. But i’m not an amazing writer and to be honest, I was so pumped after our trip to Legoland that I just want to share the love!

In any case, you can keep reading. I certainly won’t stop writing here. But if you want to know my final thoughts on Legoland and whether it’s worth your money. It is. It just is. So forging ahead, we arrived in the oddly laid out car park (still in the zoning stages) and found that the entire area surrounding Legoland is still in development – it looks clean and modern and Legoland will soon no doubt be the epicenter of a very swanky area.

Parking costs RM9 per entry, though you only pay when you leave. This caused some confusion as to enter Legoland you need to walk through the Medini Mall which has at least three or four parking validation machines between the parking lot and Legoland.

BUT you can’t use any of these to validate your Legoland parking. You’ll need to walk all the way to the parking lot and use the one machine there.

At some point we’ll put up a proper photoblog / gallery of this incredible place but for now we’ll leave a few pics here.

When we got to the entrance (after going through the Medini Mall and after ordering a Voltage from Gloria Jeans) we were greeted with a view of Lego – EVERYWHERE! (The kid in me instantly went bonkers!) To the left a huge Lego hotel rose up (this is actually a real hotel) and to the front a huge reception that led us to ticket sales etc. The ticket buying process was very easy and we got through in no time. As I suspected they do cater for the Singaporeans and even provide facilities to accept Singaporean Dollars. No need to convert before coming over.

The park was much, much bigger than I expected and we had no idea where to start. A brief consultation with a Map board pointed us in the direction of Mini-land and I headed straight for it. I expected a representation of the Petronas towers and some Kuala Lumpur highlights but when we got there it blew me away. And despite being called “Mini-Land” it was huge! 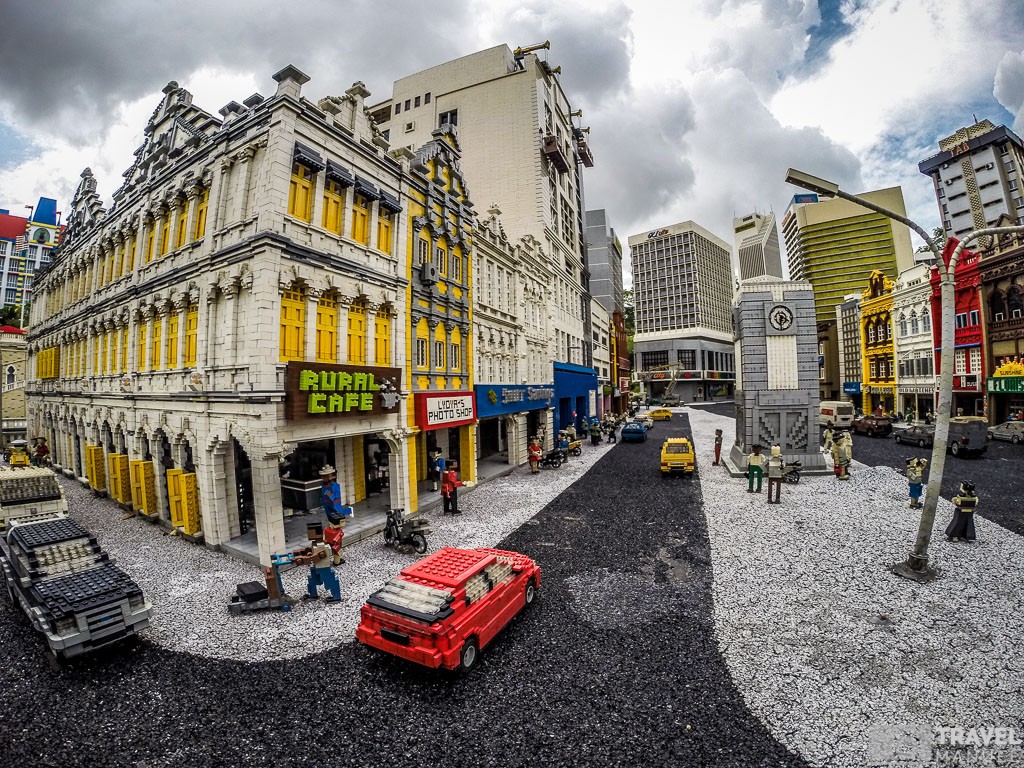 There were large sections of KL, the mono-rail, popular streets, the KL tower, Putrajaya, KLIA, the harbor, government buildings, mosques and much more. It wasn’t even limited to Malaysia and we found incredible scenes from Indonesia, Brunei, Angkor Wat in Cambodia, The Forbidden City in China, the Taj Mahal in India, a huge section of Singapore, Wat Arun in Thailand and more attractions from Laos, Vietnam, Myanmar, Johor, the Philippines and more. Mini-land was seriously cool and I could have spent hours there alone. In fact, because it’s in the center of the park, I found myself wandering back there quite often and every time I did, I uncovered whole displays that I had previously missed. I forgot to mention that most of these display have moving parts – certain boats, cars and even construction teams were fully animated – which brought it all to life nicely. I’m not sure who was more mesmerized – the kids or me! 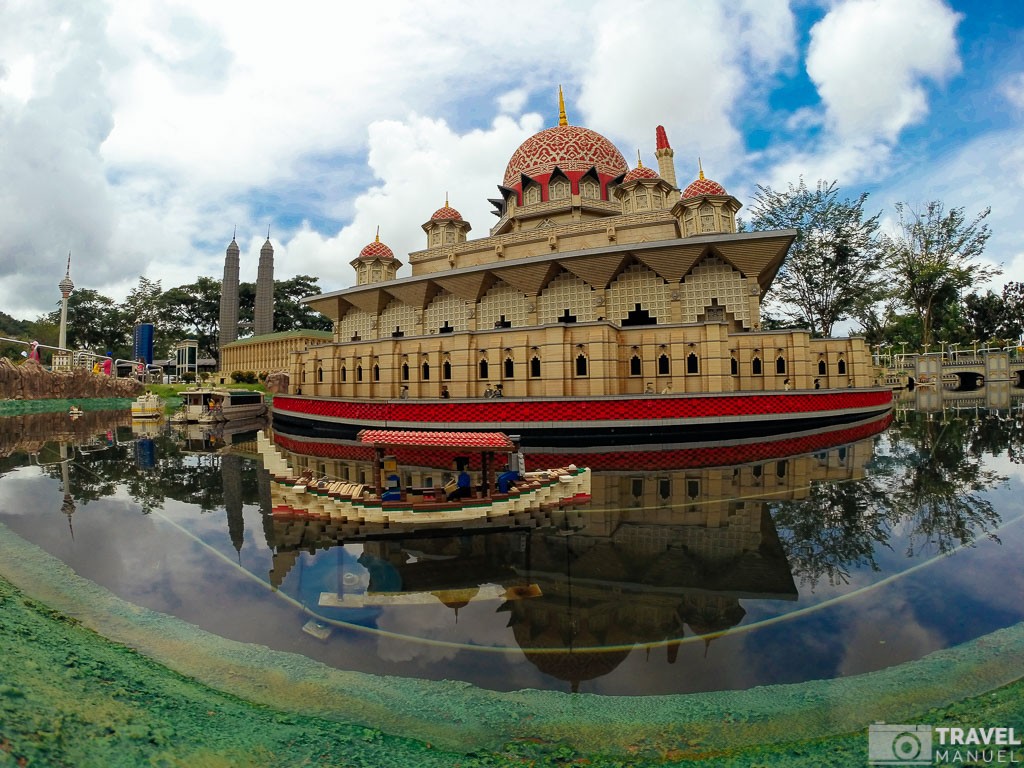 The rest of the theme park is divided into Lego sections such as Lego Technic, Lego Kingdoms, The Land of Adventure, Lego City and of course the Water Park – which we didn’t go into this time. There is also an “Imagination” section which we didn’t really explore as it’s geared more at younger kids – they can build Lego here, go on epic little-people rides, watch 4D movies and more. It’s really cool but we were limited by time and there was so much more to do like hit the rides and roller coasters. If you weren’t aware – Malaysia is a piping hot country – we were on the verge of monsoon season when we went but it didn’t rain (thankfully) and turned out to be just another scorching day.

The first thing (after mini-land) that Lauren wanted to do was hit a water ride so we could get wet. After checking out the map again we headed to The Land of Adventure which was super cool. It’s actually set in Ancient Egypt and there are Lego statues of Pharaoh, camels and all those sorts of things (very very cool). 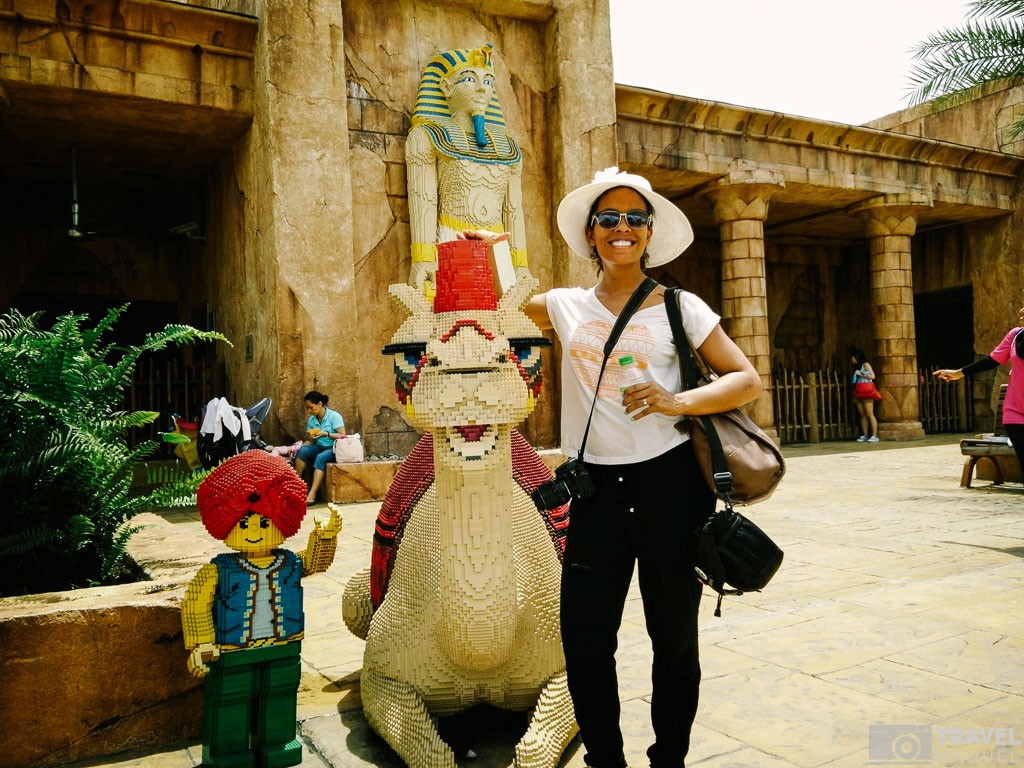 Before we got to the water ride we stood in a short line for what we thought was a roller coaster but ended up being a ghost train ride that you shoot haunted ancient Egypt artefacts on, or something. We were basically Tomb Raiders. It turned out to be super fun (and air-conditioned) so we were stoked.

Next we found the ride where we ended up getting drenched. Thankfully they point this out before you got so we had time to put our valuables away. The ride is called Dino-Island and is set in a time where humans and dinosaurs co-existed. The displays are just incredible and before we knew it our boat was headed up a steep platform with tribal chanting playing over the speaker. It was fascinating. As you know, what goes up must come down and once we were through the dark display area in the boat the doors opened to reveal a steep drop down a ramp into water. We got soaked! Which was heavenly in the heat. If you want, there are “Body dryers” available but we were so hot that we didn’t mind walking around through the park drip drying. The rest of the day seemed to fly by. We posed with Darth Vader, went on Roller coaster rides, ate great burgers, laughed a lot, took way too many selfies and felt like a kids again. And we weren’t the only adults to feel this way. The sound of laughter and people smiling were all around us. I can’t even imagine how stoked the kids were.

Though we originally only intended to stay there for two or three hours we ended up staying for around 6 hours. Which speak volumes about the kind of place it is.

Legoland Malaysia pleasantly surprised me and I really can’t wait to go back and check out the water park. Even if it is going to cost my other arm and leg.

The one thing that irritated me (literally, the only thing) was that they didn’t let me take my Go-Pro on many rides for whatever reasons. Obviously I don’t take kindly to authority so I ended up sneaking it on many rides 🙂 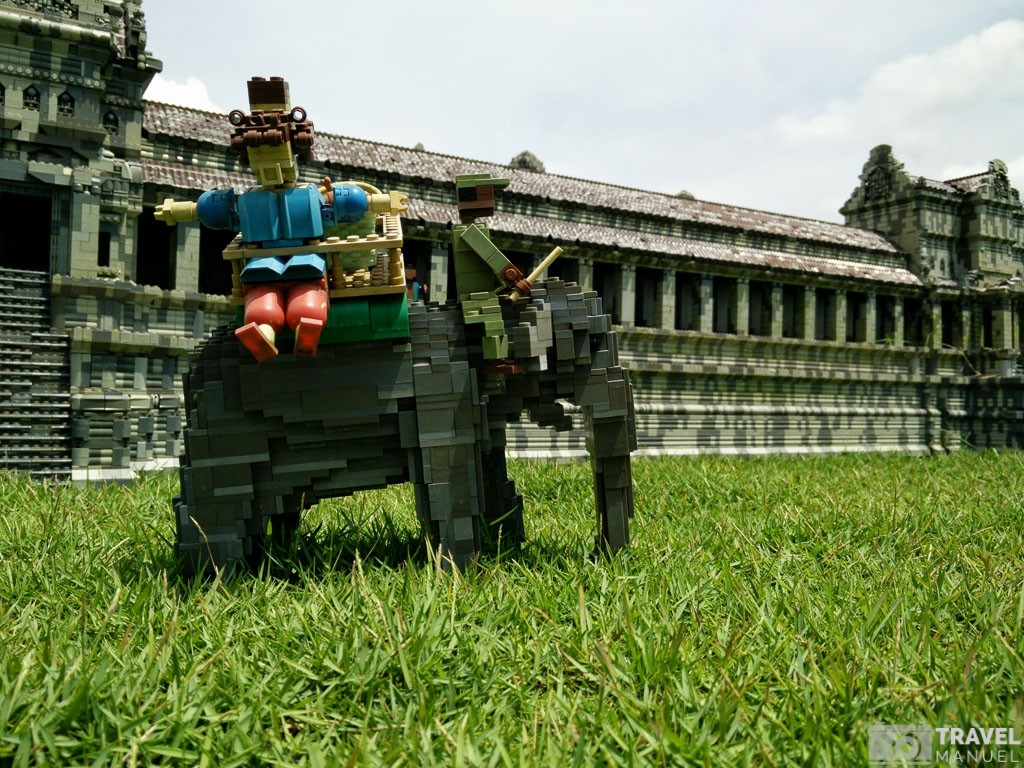 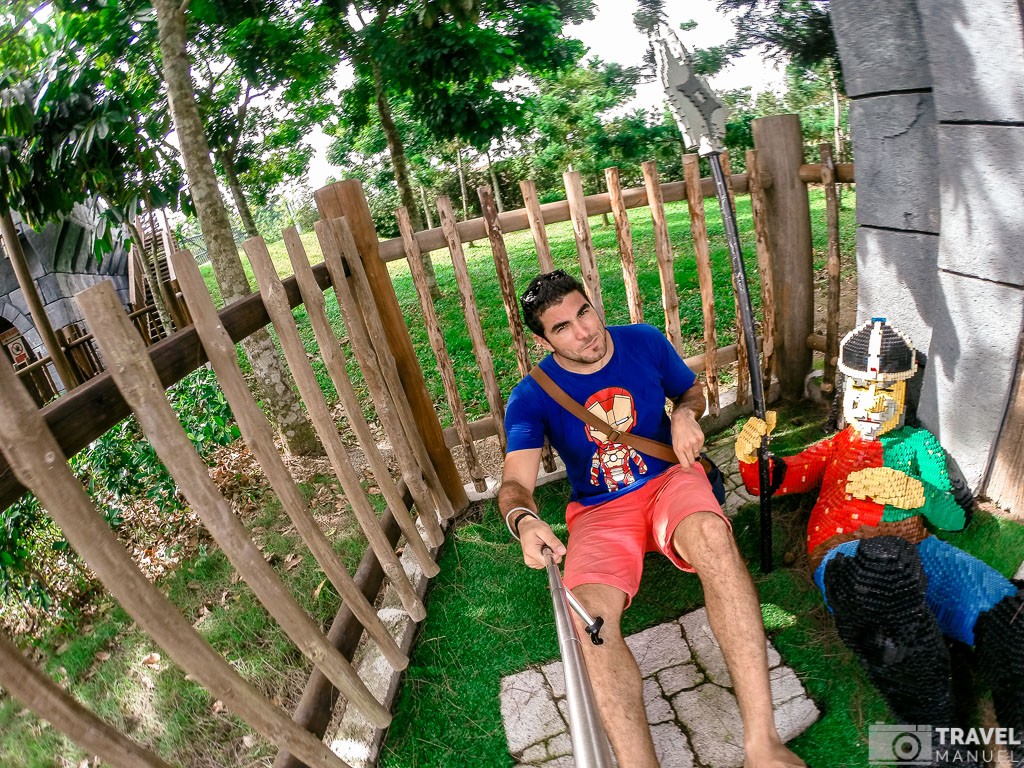 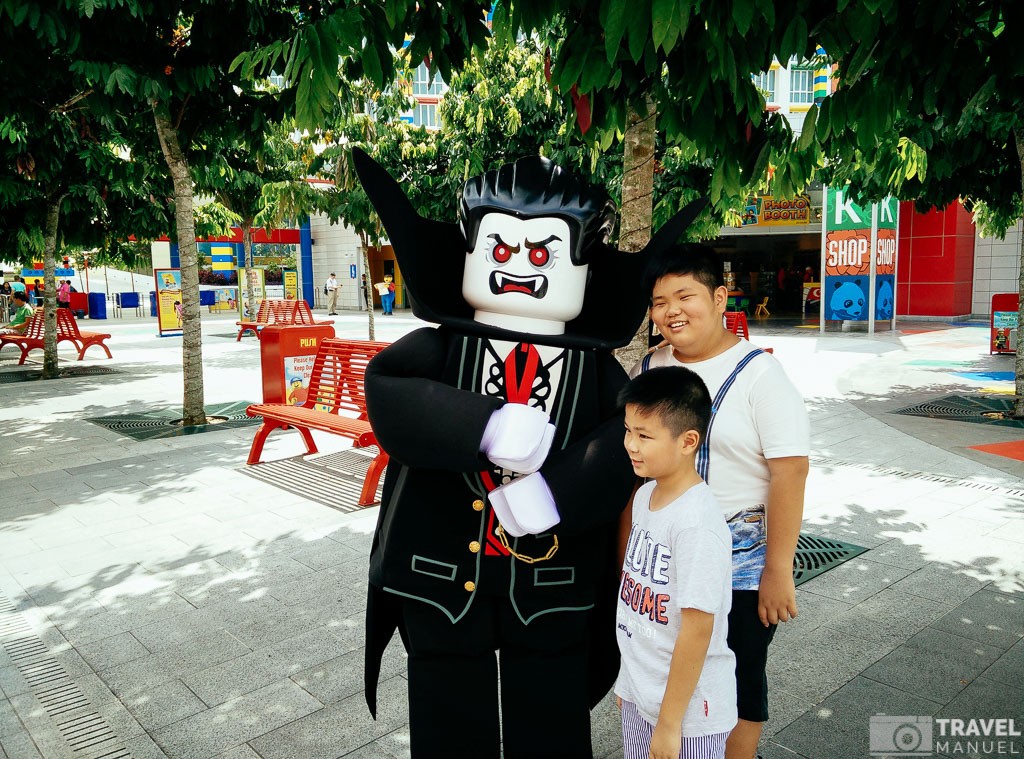