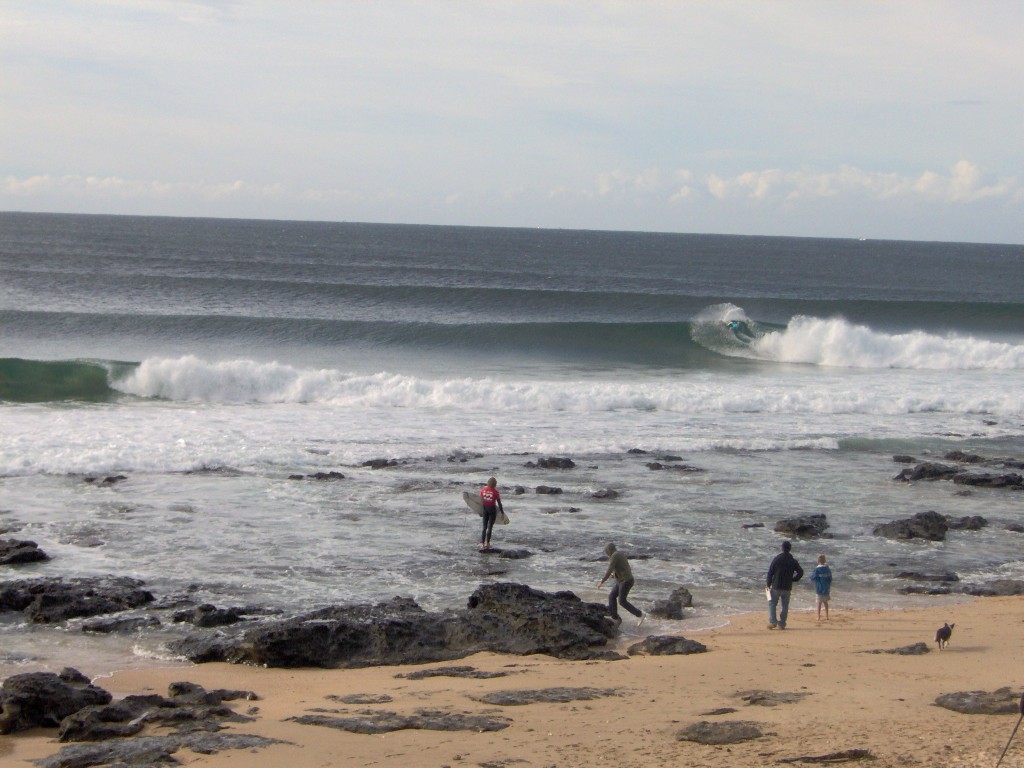 Long distance relationships have never been known as ideal. But you hang on to your loved one via available telecommunications until the time arrives when you can be reunited.  Closing the distance gap between us meant that I would visit him in the seaside town of Jeffrey’s Bay (Jbay), home to the best right hand point break in the world.  If you have no clue what that means, then we have something in common.  You too are no surfer.

Because of his long-term devotion to the sea, I knew beforehand that this idyllic town had started out as a fishing village before the early 60’s when hippy surfers discovered its perfect waves.  Thereafter International pro-surfers flocked to this spot in the same breath that they cruised to Hawaii, to find perfect points, classic reef, sunshine and aloes.   To non-surfers this means that there are huge waves allowing you to ride to the right for ages and rocks that will cut you mercilessly if you can’t surf well enough.  Today this bustling tourist haven has everything from restaurants, bars, factory shop outlets with great prices and beautiful beaches.  You can find various accommodations from camping on the sand dunes to backpacking, guesthouses and self-catering apartments all with a sea view.

The regular bouts of wind from the coast kept me off the beach for fear of an involuntary, sand exfoliation.   It is impossible to get lost here and one can easily navigate everything in the town from the main Da Gama road.  Walking from our apartment in the town centre, I enjoyed a perfect cappuccino at Potter’s Place which also stocks creative arty bits for your home and has a mini-theatre for local performing artists and musicians and a magnificent brie cheese burger at Portofino.  A block away I stumbled upon a second-hand bookstore that also served as an internet café and munched on some chilly, biltong sticks from Mr. Biltong next door. (It is South Africa’s equivalent of Beef Jerky, only much tastier).  Wax café’s nutella pancakes cannot be missed while strolling along Da Gama Road either.

I knew the time would come when he would suggest that we bond in the sea and surf side by side.  So when he did the expected and nudged me towards “Kitchen windows” a well-known surf spot where the reef (scary, jagged rocks) cause surf-able waves to crash before them, I agreed.  It’s not as if I hadn’t surfed before or that I couldn’t stand up on a board, but the fact that no one else was out in the water, should have been the first hint that it was not meant to be that day.  The numbness that immediately engulfed my feet as I stepped into the ocean should have sent me running for cover, but instead I smiled, shivered and followed him blindly into the waves.

I only agreed to this as the waves looked fairly friendly from land and I was eager to say that I had surfed these world-class waves.  Being the well-oiled machine in water that he is, I quickly found myself way behind in the paddling stakes before we even reached the destination where the waves were waiting for us.  By the time we arrived, my arms were crying out to stop paddling and I had to resist the urge to collapse on my board.  Instead I clenched my fists together in attempts to retain heat, whilst trying to stay afloat and avoid toppling off as the next set of not-so-small waves came in. 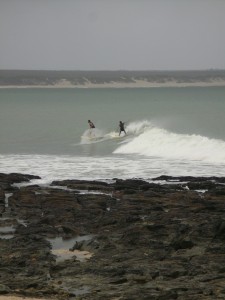 When the inevitable moment arrived, I turned the board around and paddled my little heart out while he encouraged me.  It was all set up.  I was in the correct position, confident it was mine, but once the wave carried my board, I was so terrified by the speed it was carrying me forward that I remained in the same position.  Glued to my board, on my stomach with salt water spraying my face and too afraid to stand up.  With each oncoming wave I was confusingly advised that I either waited to long to stand up or that I tried to stand up too early.

As this nightmare of choppy waters, strong wind and huge waves unfolded around me I stared in horror at the sand, which seemed an impossible distance away from me.  In my panic-stricken, freezing state, I remembered I was safely with a former lifeguard and decided that this day would not end in death by drowning, perhaps only by hypothermia.  I dreamt of hot chocolate, warm blankets and dry land and decided that I was abandoning ship and heading for the beach despite my unfruitful session.  What was meant to be a fun time for both of us, left me in a jaded position of wondering why I ever imagined I could surf in the first place and vowing to never to attempt it again.  If it was not for the lamb souvlaki at The Greek restaurant down the road, magical sunsets and white-sand beaches, I may have never wished to return to this laid-back town.  But as it turns out, I’m hooked on its peaceful beauty and have managed to catch a few waves here and will be sure to return many times over.

For ladies who are really keen to learn how to surf or gain a bit more experience in Jeffrey’s Bay, there are good spots to do so.  The main beach (also known as dolphin beach) provides an excellent place for beginners and I would suggest going for a surf lesson with the Wave Crest Surf School (+27 73509 0400) directly opposite Dolphin Beach. Surfboard rentals go for only R100 for an entire day from surf shop Surf Africa     (+27 422934 128).  There is nothing that really compares to the exhilaration of standing up on a board especially for the first time, just make sure you are with someone who knows the waters, rocks and conditions before heading out in the water.  Otherwise Surf’s up! 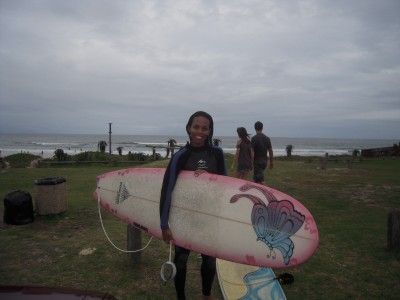