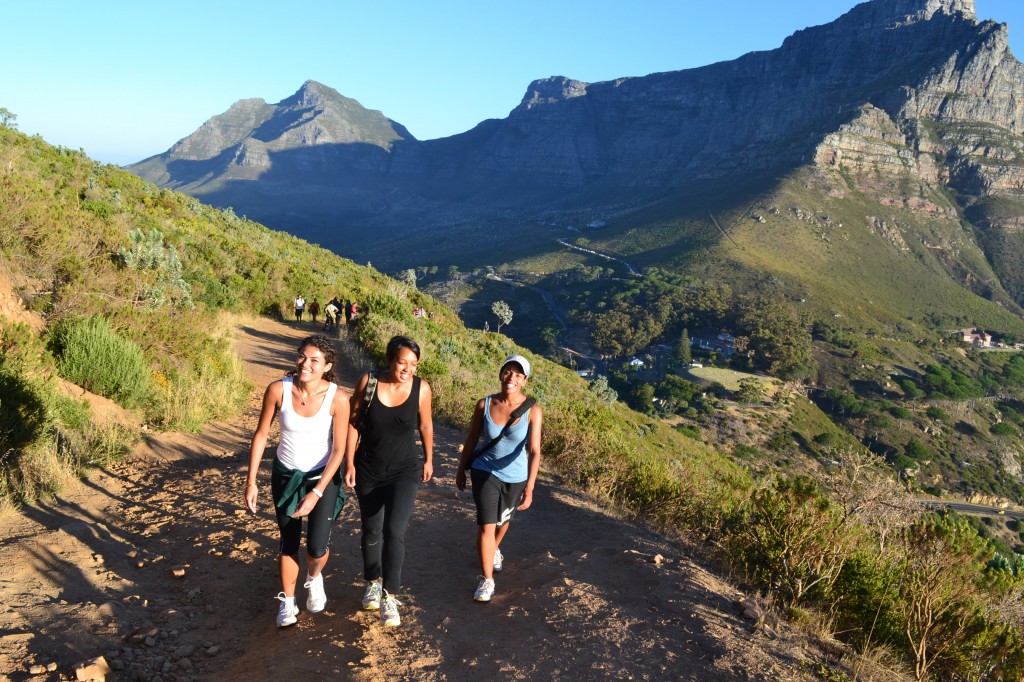 When standing in the city bowl centre of Cape Town, if you look to the right of Table Mountain, there’s where you will spot a mountain with its most northern peak resembling a lion’s head or so they say.  The ‘buttocks’ are known as Signal Hill and overlooks the Cape Quarter, de Waterkant neighbourhood and the newly built Cape Town stadium.  Today was the day I made the entire trek up to the tip of Lion’s Head.

As a group of three girls and two guys, we parked the car along the bustling road and made our way up the incline in a race against the sun.  The full-moon hike had failed only the night before when the Cape’s wind had been too fierce.  But tonight, there was not a breath of wind about and my UK friend eagerly took the front position urging us all to hurry up so we don’t miss the sunset.

I’ve never been a fan of inclines and the fact that we were practically sprinting up the mountain sans break was becoming somewhat unbearable given the heat.  Two of us were tragically behind, but I took the opportunity to shoot photos of the expanse of ocean, rocky outcrops and forest just below us.

Once the gravel portion of the trail disappeared, we began moving up rocks.  The incline was still fairly gently and I glanced down at Signal Hill, the krammat on the pass below and Sea Point. 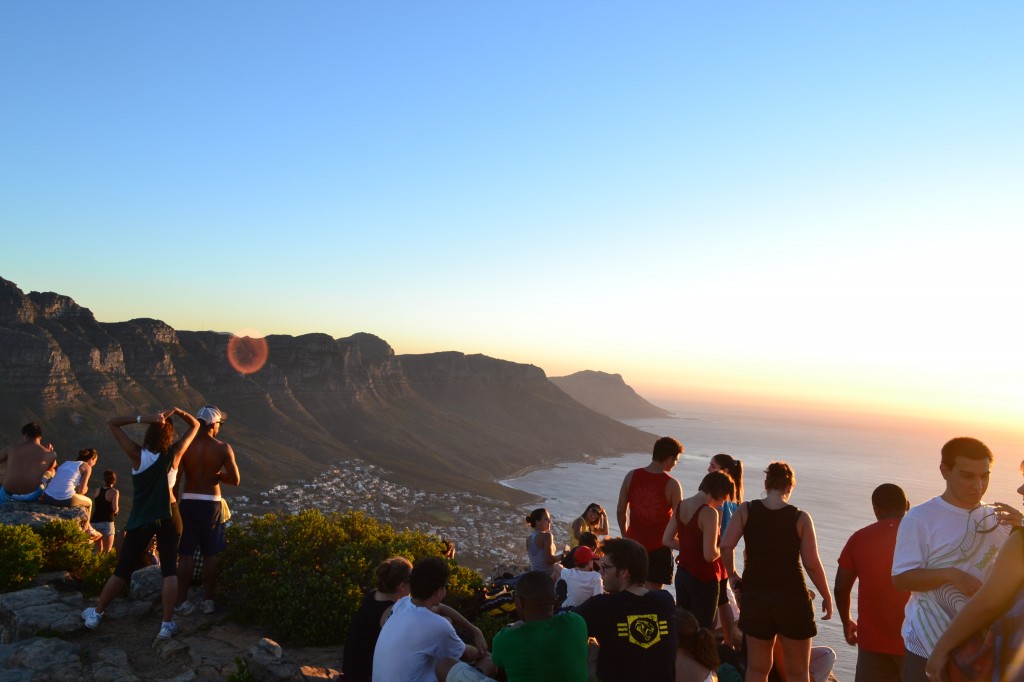 It seemed that all of Cape Town had also planned to hike, as there was ample traffic along the way.  Couples overtook us, Portuguese tourists moved slowly in front of us and it was now time to use metal ladders to ascend.  Tucking my camera away, I crept up the ladder and stood in the queue to move even further up the mountain.  The sun was slipping ever closer to the ocean’s edge and we imagined that we wouldn’t make it on time to see it setting.

I was sweating madly in the summer heat as I reached the chains hanging on the huge rocks of the mountainside.  I had underestimated this hike and envisioned more of a relaxing walk, but strangely enough I enjoyed this climbing portion more.  Once again we had to pause as if waiting in line at a busy boerewors roll stand.  I sipped my water and stared at the Twelve Apostles mountain range, the palm trees lining Camps Bay beach and the navy blue sea undulating as it reached land.

The last bit was exceptionally steep and I had to get a firm footing with my feet in the rocks and hold firmly with my hands.  A Labrador made it up slowly with the help of his owner and as the tired sun bathed the rocks in a warm glow, we reached the very top.  It looked like a block party on a peak.  Hikers covered nearly every part of the top surface.  Perched on rocks, they drank, ate and huddled in groups relieved that the climb was over.

We took out our fruit, juice and snacks and squatted on any available rock space.  I stood in awe of the red ball that now dared to disappear completely.  The horizon had been painted with orange and pink streak and to my left Table Mountain was covered in shade.  I ‘held’ the sun, ‘kissed’ it and did all the silly things one does for photos when the sun is aflame.  My boyfriend and I sat on a rock jutting on over the steep edge and sat in silence taking in the view.

When the red dot had fully hidden for the night, we moved to the other side and waited for a moon that did not appear.  The sky showed purple and light blue signs of an absent sun and as the city lights beamed to life, the moon stayed away.

Walking down the mountain was just as tough, my knees took strain and eventually my feet too as each the gap between steps was so large. It was only once we were halfway down, that the moon decided to show its face.  At first it resembled a huge ball of cheese poised in the twilight, but when I took my eyes off my feet trying to navigate in the darkness, it was an average, white gold ball finally provided essential light to descending hikers.

We made it safely to the bottom after 9pm. Ravenous, sweaty and exhausted we drove off into the night and I decided I would have to do that all again. 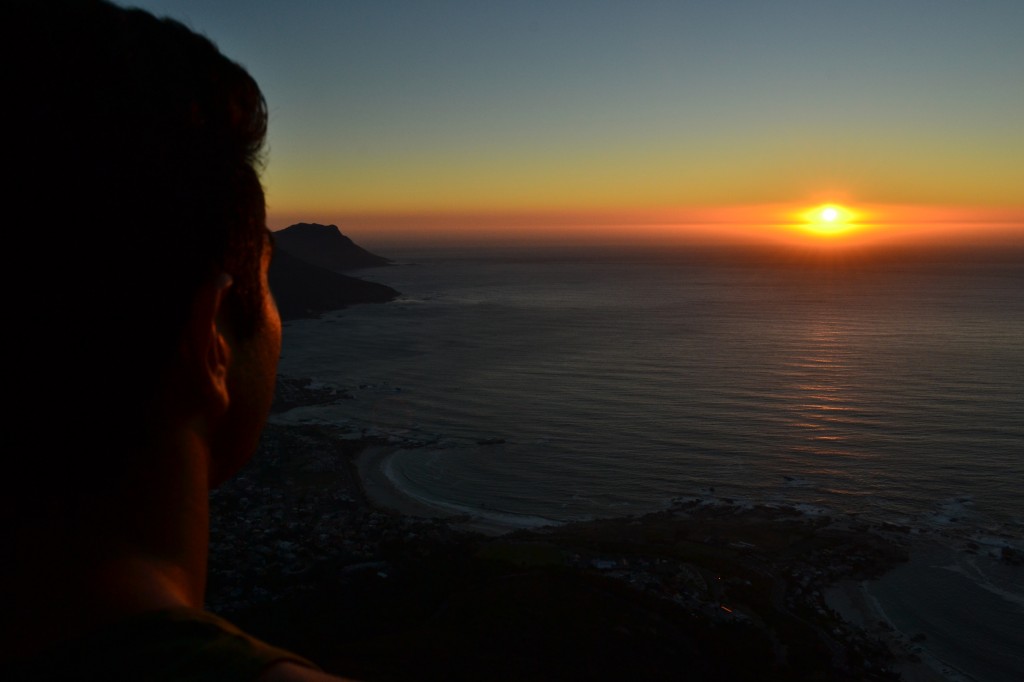 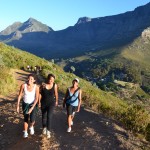 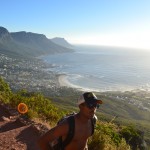 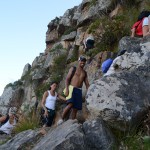 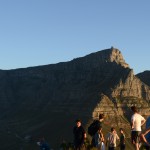 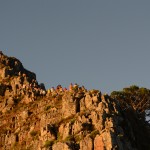 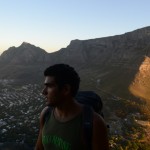 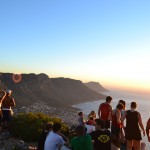 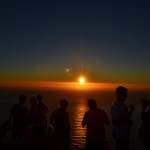 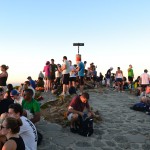 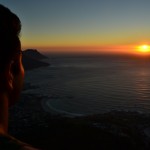 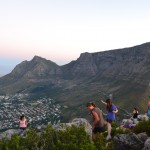 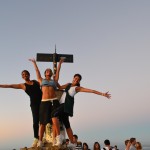