You are here: Home / Travel / Hiking Tales in the Drakensberg.
85
SHARES
FacebookTwitterStumbleuponBufferPinterestPocketGoogleWhatsapp
Mail

Shifting my weight ever so slightly onto my left leg, I slowly creep towards the edge of the cliff and peak below into the misty abyss. The abyss is grey, a foul grey, a grey that mimics the lair of a gigantic dragon waiting for his next meal. My heart starts to race as I realise this shaky chain ladder is the only way down to freedom, to safety.

As my brain instructs my wobbly legs to start retreating backwards, I turn to my right only to see a patrol officer from the South African army, take a few deep breaths as he squeezes the guardrails; his knuckles turning white.

The weather in the Drakensberg Mountains has turned on us and now we have to face the consequences of mother nature. My macho bravado decides to stay out of this one and all I can blurt out is “Guys I’ve seen this movie before…this is when we die.” 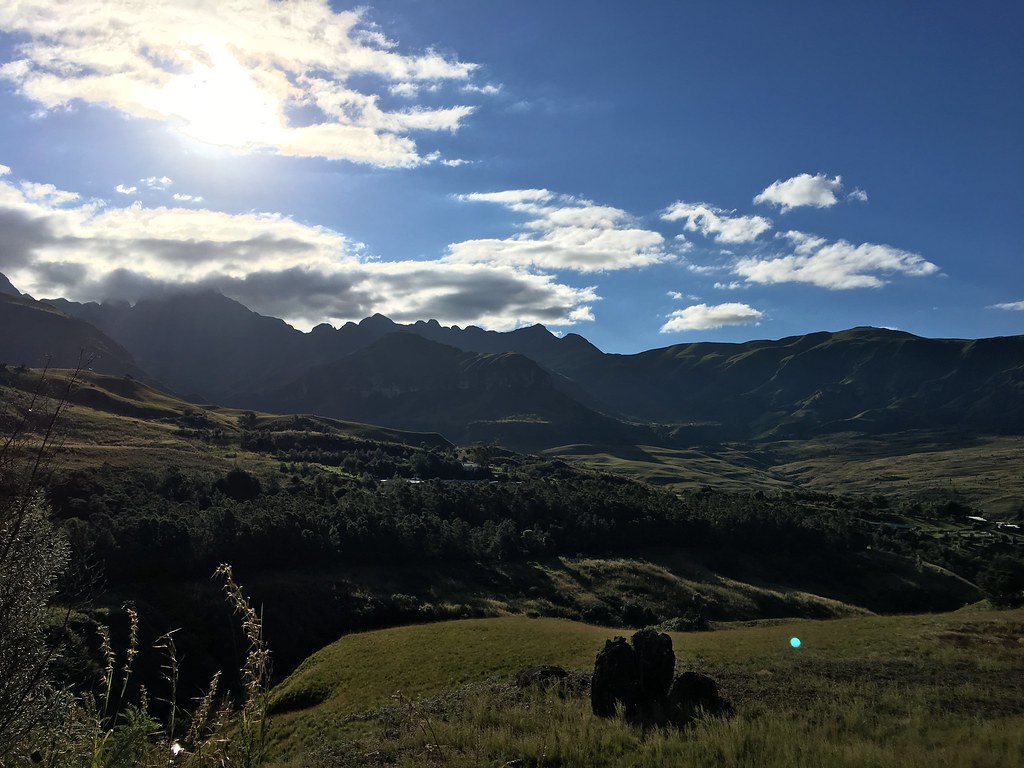 I’ve been living in Johannesburg for the past 4 years, yet I had never visited the Drakensberg. Popular amongst the people of the North due to its close proximity, the ‘Berg’ is ideal for a long weekend getaway that won’t break the bank. As a result of this, we decided to use Amphitheatre Backpackers as our base from which to explore this hikers’ paradise.

The most popular hike in Northern Berg is the hike to The Tugela Waterfall – the highest waterfall in Africa. The top of the falls is situated at an elevation of 2 972m above sea level with its actual height cascading down 948m. We decided to undertake the hike to the top of the falls starting from the Sentinel Car Park which could take you anywhere between 5 to 8 hours depending on your fear of heights and Bear Grylls abilities. 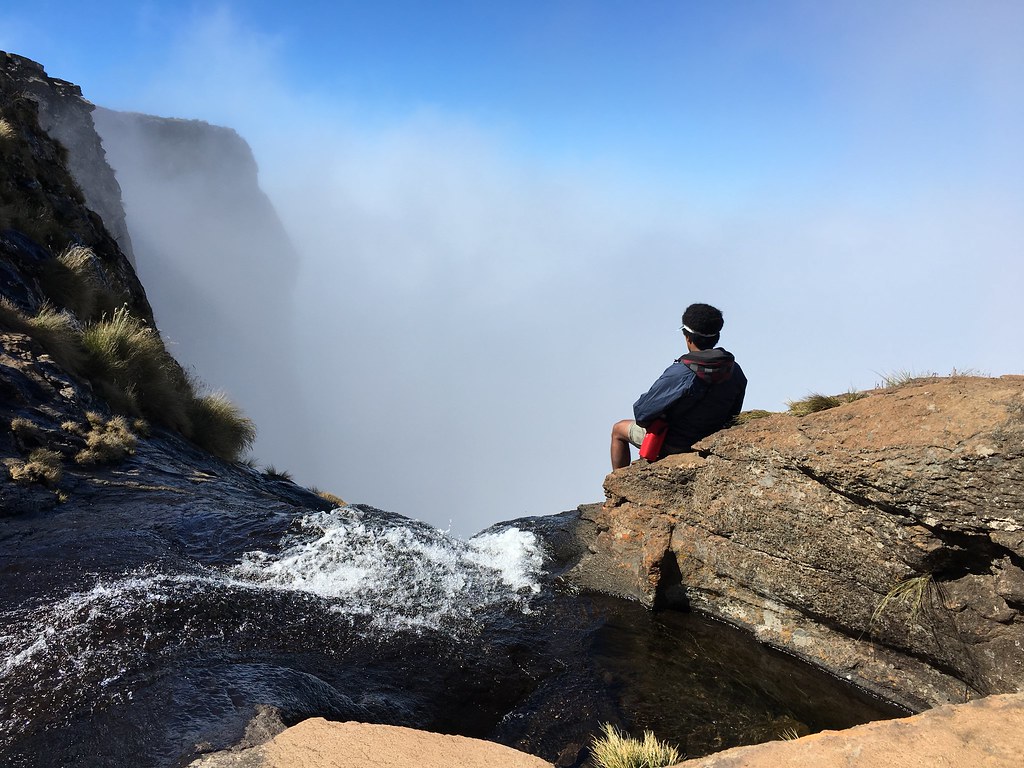 A self-guided hike is possible, however, we joined an organised hiking tour run by Amphitheatre. Our group which consisted of Americans and some locals enjoyed the winding ascent while we chatted away and indulged in some snacks en route to the summit. We took the most direct route which comprised of climbing up a steep ravine laden with huge boulders. This attacked the quad muscles but before we knew it, we were level with the candy floss clouds, breathing heavily but in awe nevertheless. 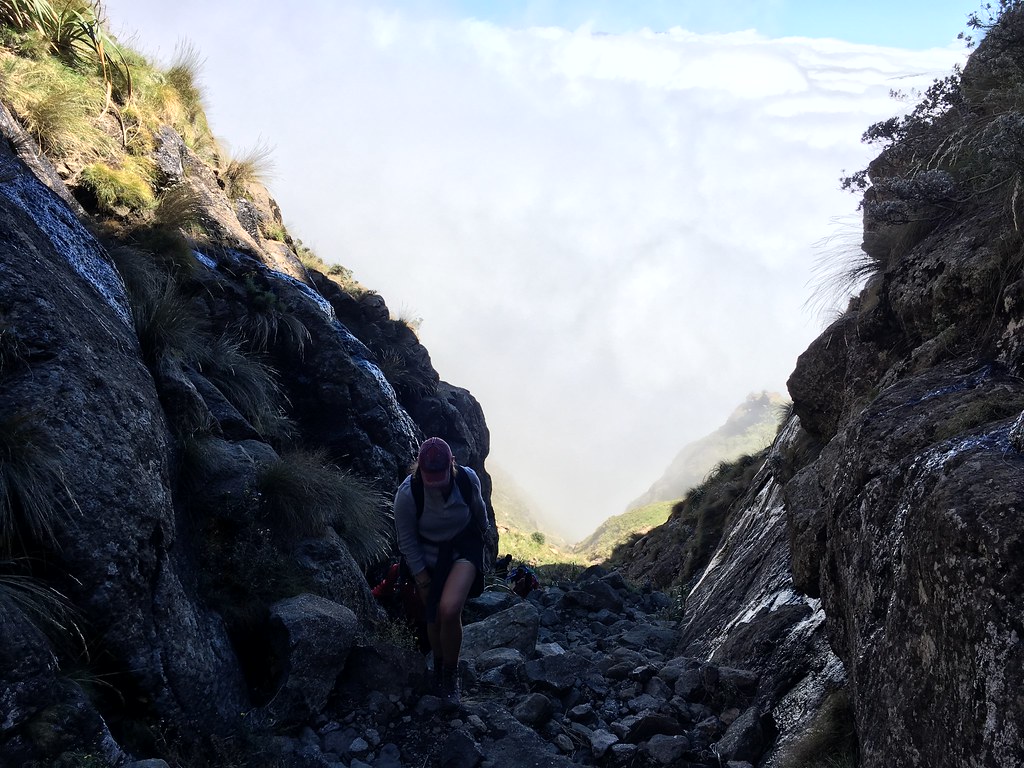 We devoured a quick lunch at the top of the ravine before we started chasing clouds on our way to finding the top of the falls. The warm sunny weather down below soon turned into a chilly bite with our rain macs coming in handy.

The much talked about view was non-existent due to the cloud cover which hid the world beneath us and gave the impression that we could just take a step off the escarpment and fall into its beauty. The proverbial selfie sessions took place with some dare devils braving the freezing cold mountain water and having a ‘jump in jump out’ kind of swim. 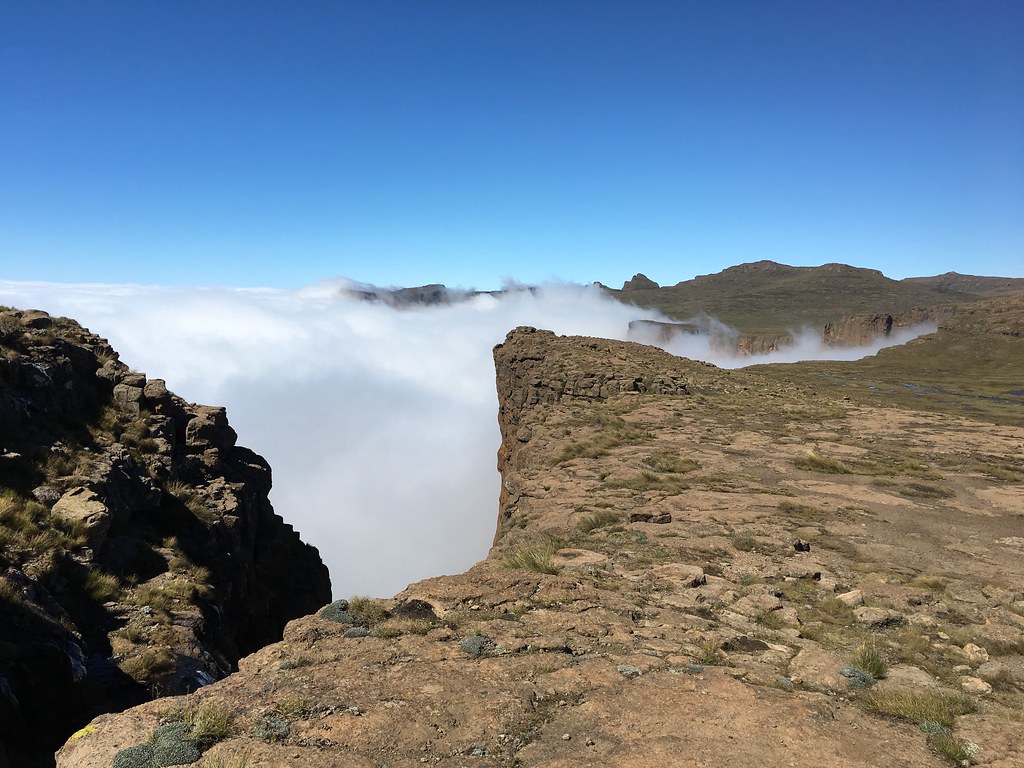 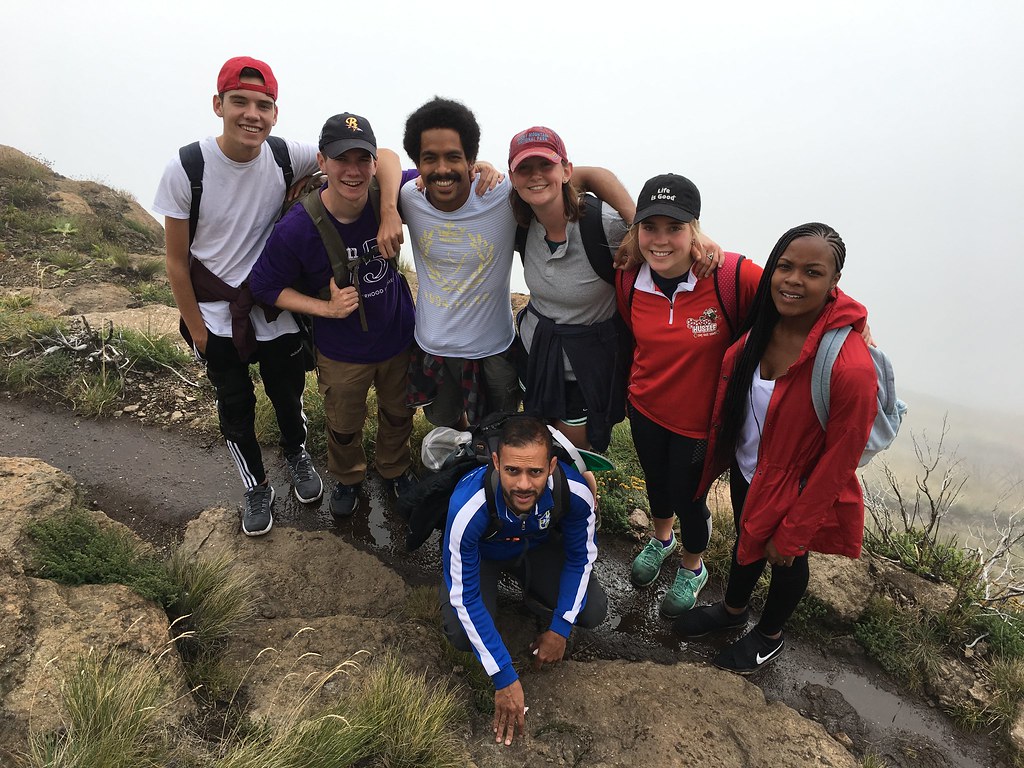 Before we knew it, it was time to head back down the mountain. The route we used to descend was different to the one we used to hike up; we now had to climb down two sets of chain ladders which were fixed against the near vertical rock face.

This sounds exciting in theory until you arrive at the demarcated point only to realise that the weather has turned and you can’t see further than a few steps on the ladder. Our group suddenly became quite anxious as we looked into the dragon’s lair. The mist had now overwhelmed us as we stood in the cold contemplating if our guide is actually being dead serious; my mind fixated on the word ‘dead’.

I waited for two of our fellow group members to descend first before I managed to pluck up the courage to drop down into the abyss. To manage the fear as best as I could, I had to concentrate on the process – sit on bum and face ladder, lean over left shoulder and swivel body so that chest faces the ground. Place right hand on guide handle and follow suit with the left hand. 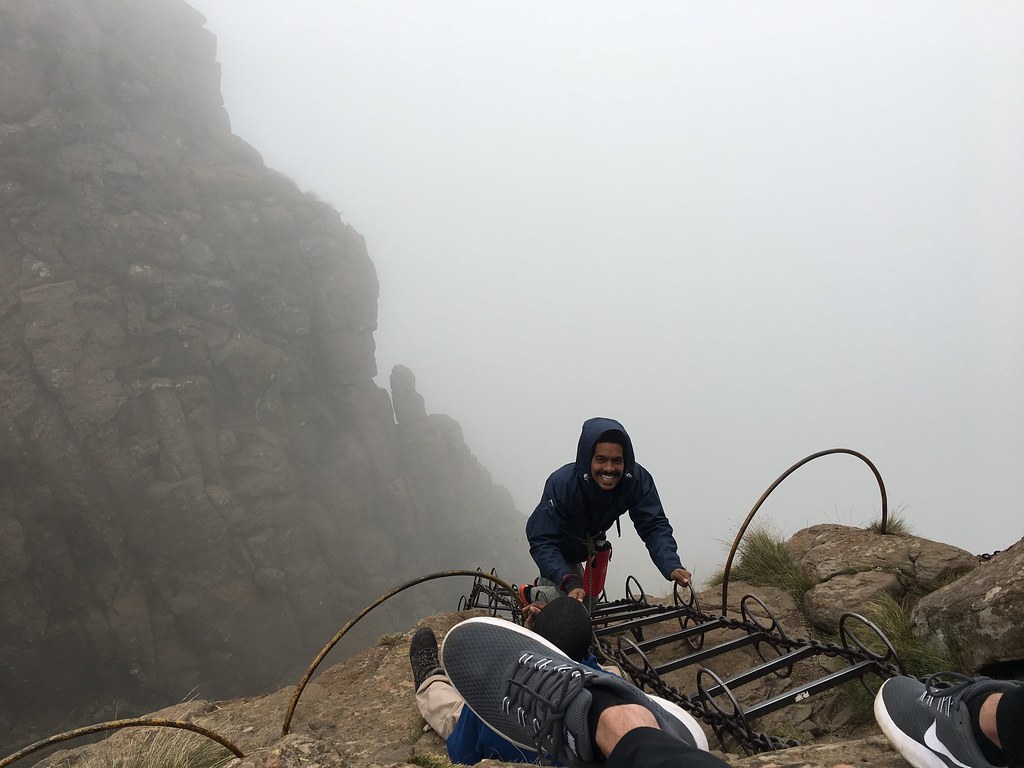 I’m half way down the ladder when my earlier statement of “Guys I’ve seen this movie before…this is when we die” pops back into my mind. I keep it at arm’s length and convince myself to just keep following the process. Eventually I manage to step foot onto solid ground and finally my ordeal is over!

As I sit on a rock mentally exhausted, I watch the rest of our group come down at a snail’s pace. My heart beat has final slowed down, I’m relieved but spent. Now for the walk back.

We woke up feeling a bit fragile from dancing the night away with a live band at the Backpackers. As a result of this, we decided to abort any organised hike for fear of being left behind. We slept in and lounged around until just after lunch time when we took a drive down via the R74 to the Cathedral Peak Nature Reserve located in central Berg.

We eventually managed to find a parking spot and ventured out map in hand towards Doreen and Ribbon Falls. Time was not on our side so we did a brisk walk past fellow nature lovers and laid eyes on these beautiful earthly waterfalls. These Falls form part of the Mlambonja Wilderness Area which is home to the Berg’s largest indigenous forest and thousands of rock art. The main attraction is Cathedral Peak which soars 3000m above sea level and is a gruelling yet magical hike for seasoned outdoorsmen. 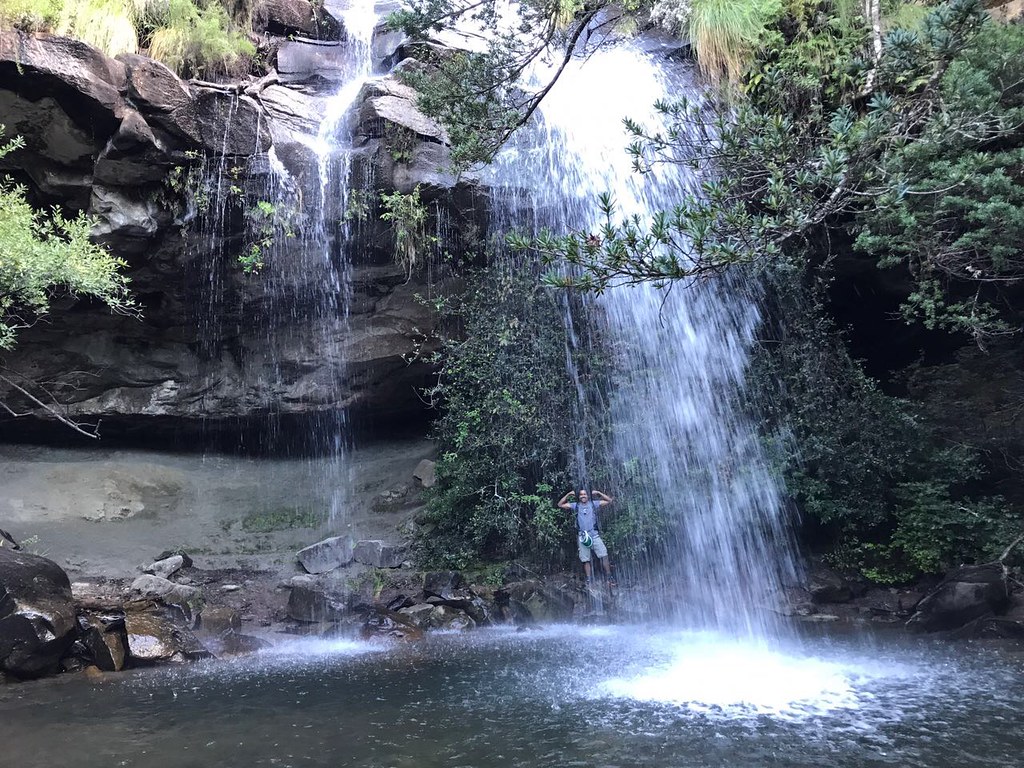 The sun was starting to set so we jumped in the car and started to navigate our way back to base. Nature is a wonderful creature – being in it is a form of meditation. This was certainly the case as it erased my memory of the fact that we arrived at the foot of the hiking trail with our fuel gauge indicating that it is in reserve. We were low on fuel when we started the drive that morning but skipped the only filling station as we assumed the hiking trail was uber close to the R74. How could it not be when the mountain was so visible, so near. Or was it?

Our naivety blinded our judgment as the distance from the R74 to the nature reserve was about 50kms one way over rolling hills and through sunken valleys. A 28-year-old male in his prime with a friend more closely aligned to his late 30’s found themselves wanting. Desperate times of starting the return leg of 50kms back to a filling station with hardly any fuel called for desperate measures. We now had to rely on our training, not combat or fitness training but rather university training. The university training related to when one is driving a jalopy, has run out of fuel, has no money and needs to get home… it’s called freewheeling!

Freewheeling is when one releases the gas pedal puts the gear shaft into neutral and freewheels down hills to conserve fuel. Yes, I will repeat – freewheel down hills to conserve fuel. We even switched off the music so we could concentrate! So much for becoming real men in society. We eventually made it by the skin of our teeth and arrived at the filling station. The expression on the pump attendants face said it all, we were lucky!

Warning – When in doubt, ALWAYS fill up your tank during a road trip. You never know where the road may take you. 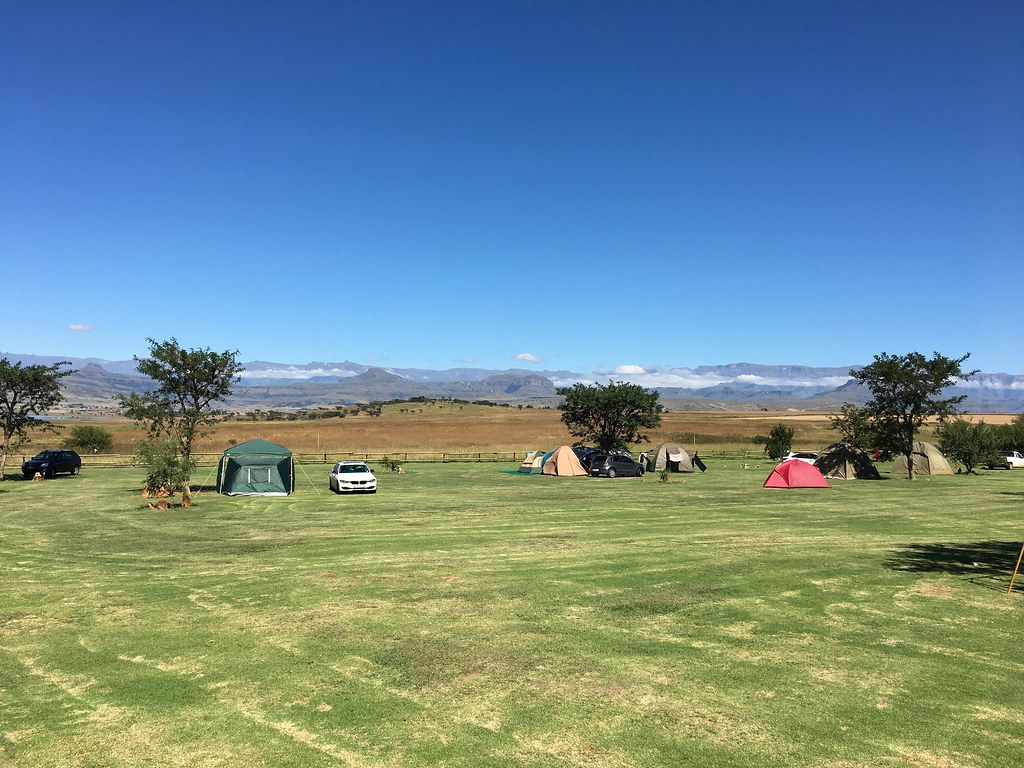 Amphitheatre Backpackers is the ideal place from which to explore Northern Berg. It offers a wide range of accommodation as well as a fully-fledged restaurant and bar (All female bar crew). Half day, full day and overnight activities are available to suit all tastes and it is the only backpackers in the Berg that has a BAZBUS stop on site.