You are here: Home / Travel / The Travel Experience of visiting Hermanus during Whale Season.
161
SHARES
FacebookTwitterStumbleuponBufferPinterestPocketGoogleWhatsapp
Mail
There are few creatures quite as majestic yet gentle and innocent as whales. Many people travel clear across the world just for the chance at a glimpse of them.

Well, if you would like more than a “chance” at just “a glimpse,” then perhaps it is time to plan a trip to Hermanus, South Africa. Known as one of the best whale viewing destinations in the world, Hermanus has also built a unique, quaint culture that you wouldn’t want to miss out on anyway!

Hermanus is a small town off the southern coast of the Western Cape of South Africa. It is a truly idyllic little coastal town happily situated between the Kleinrivier Mountains and the ocean.

Begun in the early 1800’s by its namesake, Hermanus Pieters, the people of the town have defended its quaint, sleepy small-town feel. So determined were they that, despite a train station being built and made ready for a railway, when the railway manager arrived in the town, he was convinced not to allow the rail to pass through after all. This prevented the commercialism and population growth being experienced in nearby areas to not make it in to Hermanus itself.

So, despite being an incredibly popular vacation spot, and recognized by the World Wildlife Fund (WWF) as one of the top 12 whale watching destinations in the entire world, Hermanus remains a quaint, small ocean town. 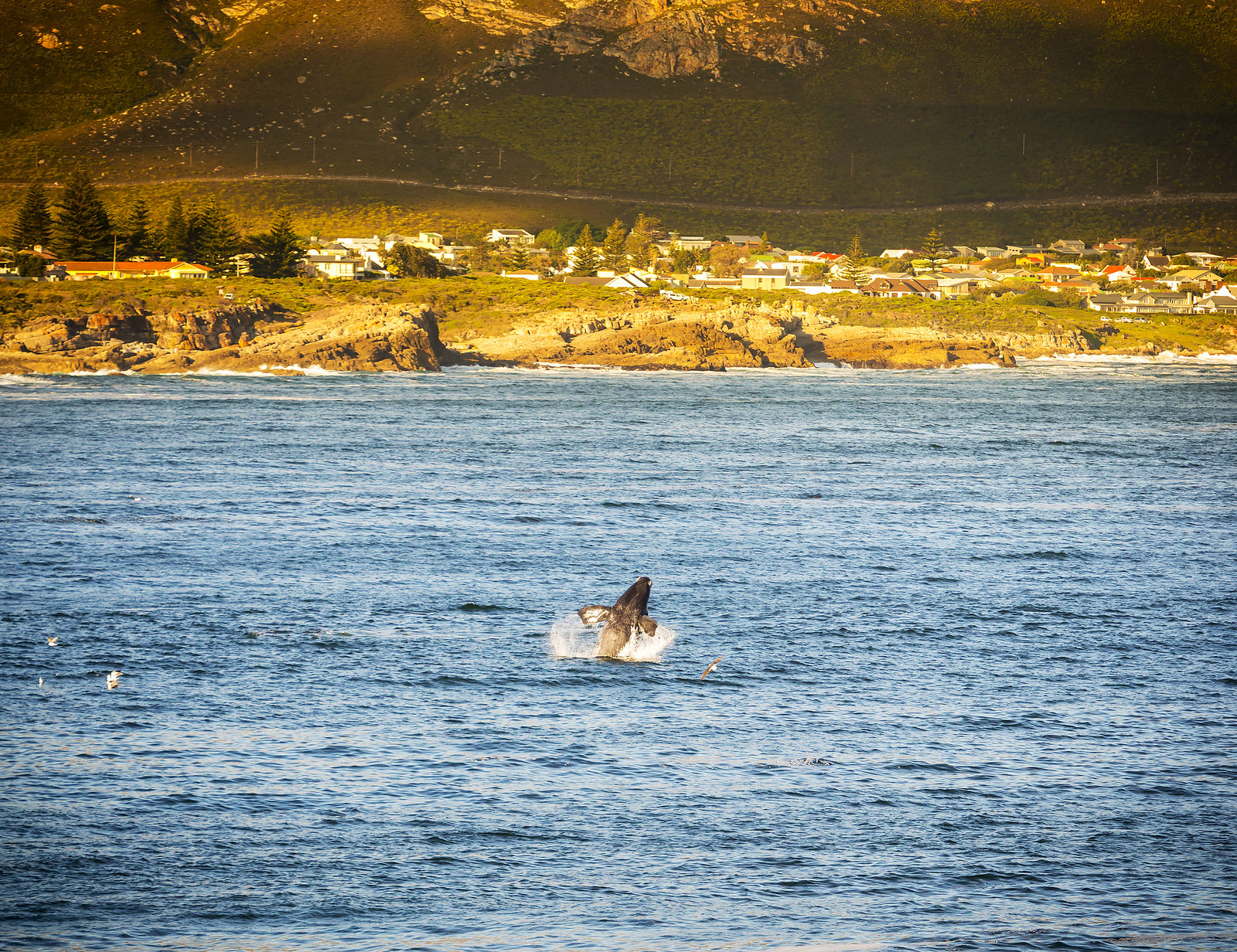 Why Hermanus is the Perfect Whale Season Spot

So, what makes Hermanus such a prize among whale watching spots?

During the winter months (June-October in the Southern Hemisphere), Hermanus’ Walker Bay becomes a whale haven. Whales can be spotted from the cliffs as early as June and can usually still be seen all the way through to December, though July – November are the prime months.

During this time, the whales come so close to shore, that even those walking along the beach line can gain a good view. Whales, particularly the Southern Right whale, come into the area to calve and mate.

As a result, viewers get to see a lot of activity and displays that are rarely seen elsewhere, including tail sailing, a behavior almost purely associated with Southern Rights and usually observed specifically in Walker Bay and few other places. In addition, it is not uncommon to see them breach (completely leave the water), as well as blow water out their blow-holes, and perform numerous other antics.

During August to September especially, visitors will likely get to see brand new calves, followed by mating frivolity in October, which is the peak point for number of whales in the bay.

Besides this being such a prime time and up-close location for spying spectacular whale activity, Southern Right Whales also happen to be some of the most curious and friendly whales, known to get close alongside vessels and interact with humans a bit more than most.

During the winter and early spring months, the Southern Right Whales of course flock in. But they are not the only ones!

Humpbacks and Bryde’s Whales also make trips into the area, along with African Penguins, Cape Fur Seals, and sometimes pods of Dolphins. Great Whites are also known to be in the area, and for very adventurous visitors, diving with the sharks is a popular activity.

With such a thriving and distinct whale season full of so many unique opportunities for whale watching, it is no surprise that Hermanus is indeed considered one of the world’s best places to go whale viewing.

As such, it should also be no surprise, then, that the culture of the town has developed quite a lot of festivities and activities surrounding the season.

Probably the two most distinct whale activities of Hermanus is their full-time Whale Crier (the only one in the world), who walks the length of Hermanus to announce where the whales are being spotted at that moment, and their annual whale festival that marks the arrival of the Southern Right Whales.

The festival is considered a great event among eco-tourism, as in addition to the numerous craft and food vendors, there are also many talks and demonstrations on the whales and environment, as well as unique dramatic performances, music and art all celebrating the whales.

Besides there being numerous cliff-top hiking and biking trails that allow people to observe hosts of playful whales from above, and numerous beautiful beaches that travelers can visit to see whales playing just meters away, there are also many boating and flight adventures.

There are a couple of licensed boat “safaris” that take groups for up-close and personal viewing opportunities with the Southern Rights. There are also kayak trips that allow individuals to get right out in the middle of the frolicking gentle giants.

If you want a bird’s eye view, you can go by air on scenic flights, and there are even hotels you can stay at that are strategically located to allow you to look out your windows to see them.

Needless to say, if you want an up-close and personal view of whales and see them at their most amazing moments, a trip to Hermanus during whale season is a must for you.

About Brittany Hawkins Brittany’s passion for food and wine began in her hometown, Napa Valley, California, where she grew up immersed in the wine industry. After receiving a degree from DePauw University, she began her career in Silicon Valley in the advertising and marketing industries. Brittany moved to Cape Town 3 years ago where she launched Explore Sideways and has since been able to marry her interests in food, wine, travel and tech to create transformative experiences around the world.