“In this very moment, she pulled out a ring and ever so slowly went down on bended knee in the MIDDLE of the dancefloor…”

When returning from AfrikaBurn, it’s likely that you’re still floating in the afterglow of pure joy with a renewed sense of faith in humanity and a profound sense of what life behind the curtain looks like. The curtain of pre-conceived societal norms. The most obvious question I’ve been inundated over the last few weeks by friends, family and work colleagues is, “What is AfrikaBurn?” 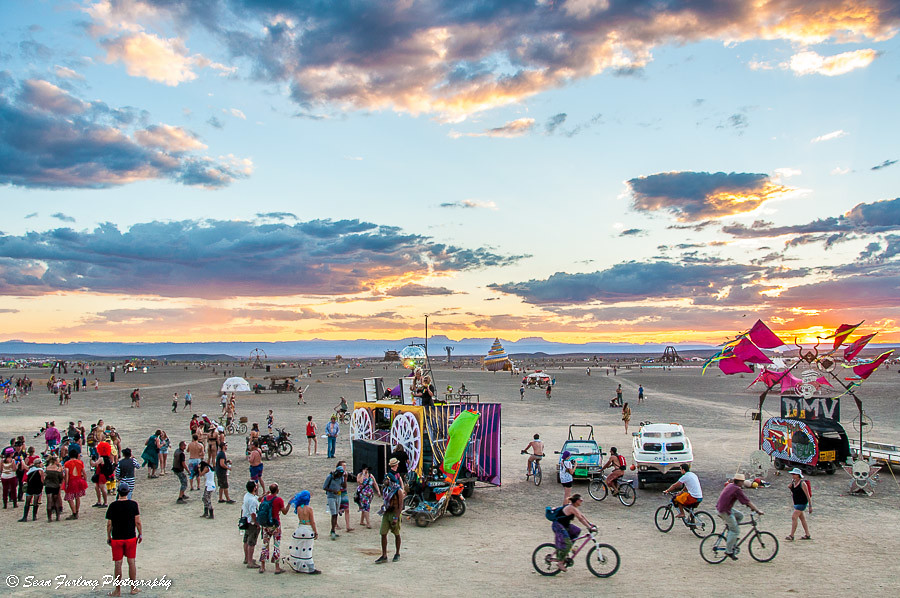 AfrikaBurn or ‘Burn’ for short is a total unencumbered immersion into a society which is based on the participation of people just like you and I who come together once a year in Tankwa, Karoo to create a temporary oasis of structures, artwork, theme camps, mutant vehicles, costumes, music and so much more.

The foundation of Burn is based on 11 guiding principles which are the building blocks for those who dare to venture into this Utopia for humans. These principles such as communal effort, decommodification, gifting, civic responsibility and radical self – expression are guidelines which help one fully embrace the magic that takes place.

I’ve had countless sleepless nights trying to figure how best to write about my personal experience. The best way I could think of is to provide a raw account of my journey. These are the extracts from my Burn diary… 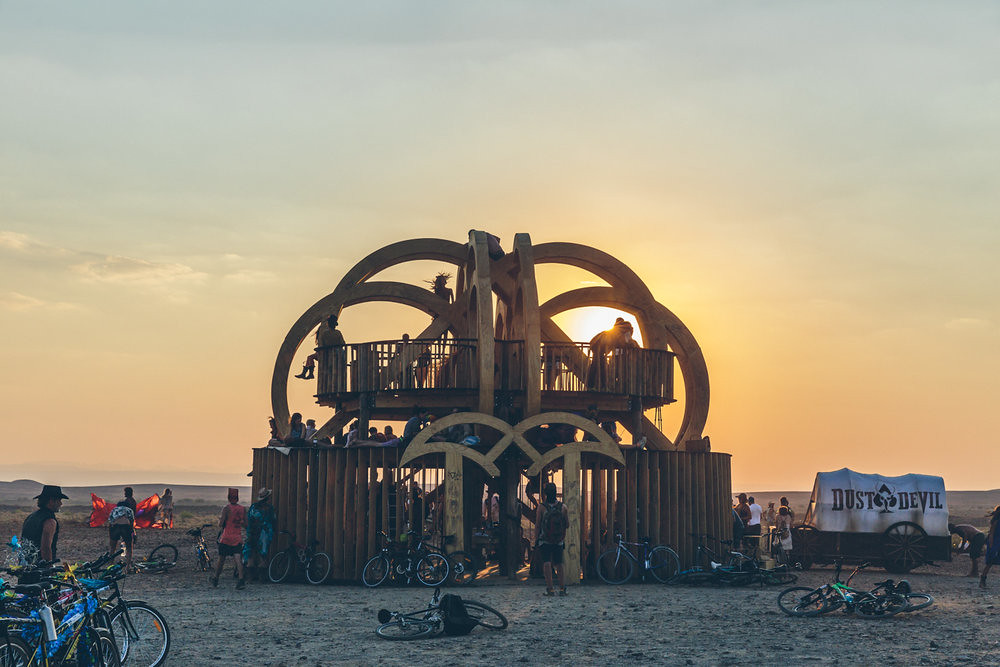 Benny, Jonny and myself finally make it onto the R355 which appears to be just another dirt road. Surely, it’s not as bad people make it out to be? It stretches for just over 110km’s and appears to be one of the many ordinary farm roads in the area. We are about 20 minutes into the drive when it suddenly dawns on me that this road is far from ordinary.

I start getting a nervous sensation in my stomach as my faculties begin to understand that this is the graveyard for all vehicle tyres; old and new, big and small, sedan or 4 x 4. We quickly reduce our speed to +-40km/hr as the shock absorbers of our vehicle shudder incessantly during which time a 4 x 4 aggressively speeds past us and ever so kindly kicks back a stone onto the front windshield. A crack which appears to mimic the length of the River Nile is now a fixed feature in Benny’s line of sight. Breath in, Breath out…

In spite of this, the combination of our youthful banter and some old-school Craig David tunes blasting through the stereo system helps to keep our spirits up. We have now been found guilty of basking in the false sense of security that we’re almost there. Take it from me, you’re NOT nearly there, not even close, not ever! It feels like the sands of time stand still while en route to Burn. The heavens did, however, bless us with a ray of piercing light through the dark heavy clouds. I knew then and there, that this was going to be a spiritual adventure.

Finally, we’ve arrived! Parked the car, checked in, received our wrist bands and due to being a Burn Virgin, I had to perform the right of passage at the entrance which is to roll in the dirt and hit the gong. I am always up for a dare but I felt so out of place. 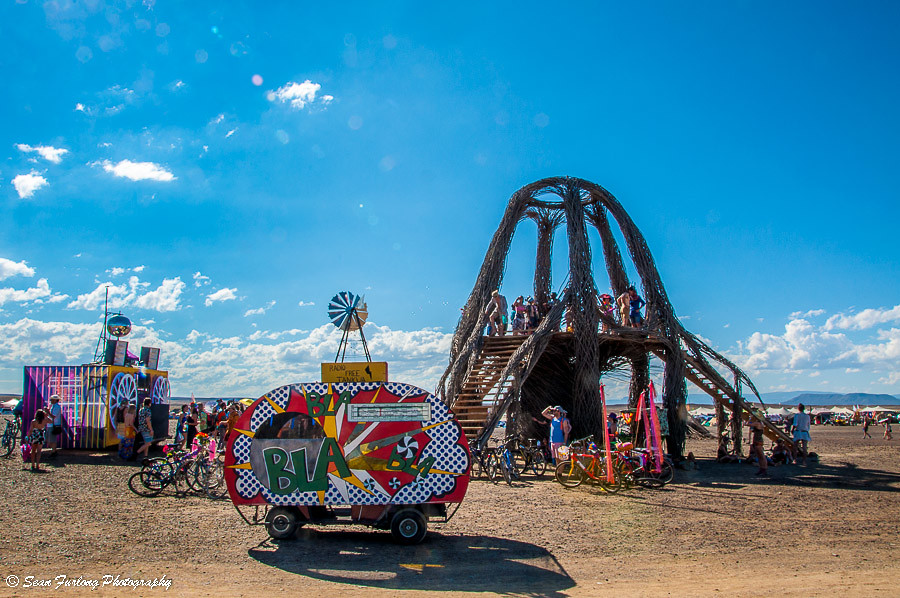 As we enter Welcome Road we hit a right on the Buitekring (outer ring) and cruise down towards our camp called Tony’s on Arrival which is situated at ‘2ish’ on the horse shoe layout of the camping area. As soon as we enter, I realise that there are no vendors, branding or advertising. Everybody’s necks are straight and erect, not hunched over looking down at their mobile phones checking their Instagram and Facebook feeds. How refreshing?!

We find ourselves on the dancefloor at the theme camp called Samsara which is the home of the Vibe Tribe. Shirt off, shades on, eyes closed, while stomping and sipping on some G & T. My nirvana was shortly disrupted as I felt a tug on my left shoulder. A quick turn indicated that it was a female whom I did not know but whom offered a beautiful smile to put my mind at ease.

Before I could utter one syllable, she communicated that she loved my ‘vibe’ and most surprisingly my moustache. My 80’s disco look which consists of a semi well maintained Afro and thick-ish moustache has its fair share of haters so I was appreciative of her kind words. I thanked her, during which time she asked if she could give me a gift. A ring to be exact. I had an inkling of an idea about this whole gifting concept but this was my first time being on the receiving end of it. I gladly obliged.

Expecting her to take the ring out and put it in the palm of my hand, things took a turn for the worst! In this very moment, she pulled out a handmade ring and ever so slowly went down on bended knee in the MIDDLE of the dancefloor. Say again?! She then took hold of my right hand and slowly slid it up my ring finger. To both our shock and horror, the ring was too small for my finger so she slowly slid it back down and proceeded to slide it up my pinky finger. During these few seconds which honestly felt like several fortnight’s back to back, my fellow party goers halted their dance routines to watch if this marriage proposal was going down there and then. 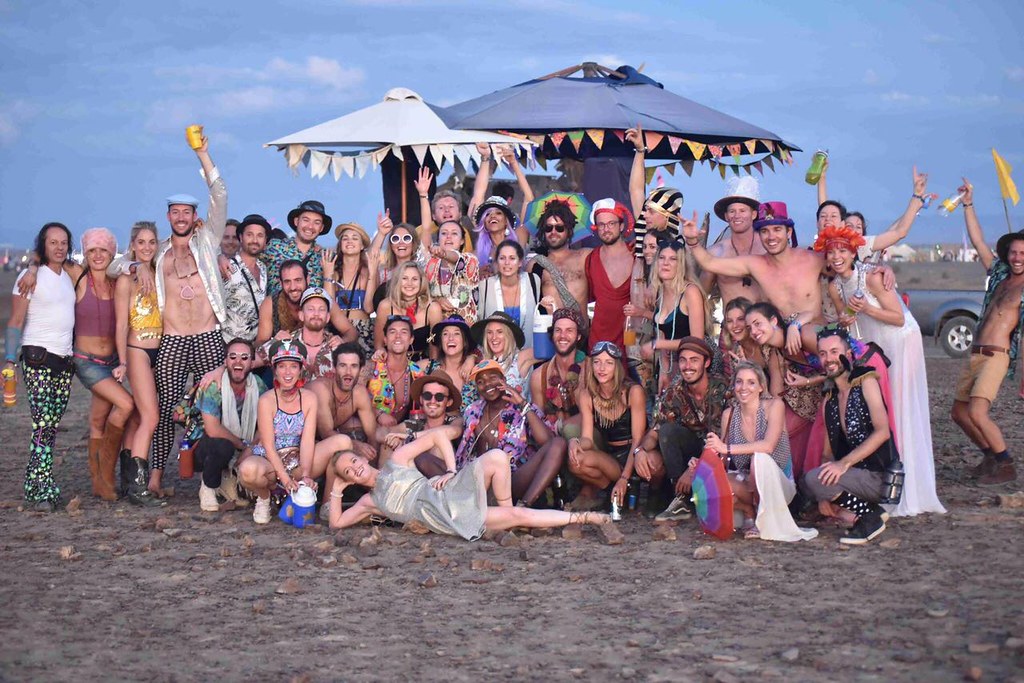 I’m not usually one to shy away from the spotlight, but this Beyonce moment was too big, even for me. As soon as the ring was placed on my finger, I helped her up from the scorched earth and tried my best to smile sincerely. In my attempt to make it less awkward I gave her a hug and started throwing out questions about who and where she takes her place in this world.

I found myself utterly confused about what I should do? kiss her? Ask her to join us on the dancefloor? Does she expect me to give her something in return? My thoughts were all over the place except in the place where it should’ve been – fully present right there in that moment. Raw interaction between two human beings without ego, without judgement, without an ulterior motive is a lost art. A true gift does not expect anything return nor something in exchange. It is unconditional. She didn’t expect anything in return.

Yes, I am guilty of letting society numb my senses to raw human emotion. This begs the question, who of us are NOT guilty of this in our daily lives? I’m slowly starting to get the sense that Burn is moulding me to begin the journey of shedding the layers of societal conformity and embracing acceptance of individuality. Just be yourself and do not judge others. We are all cut from the same cloth. 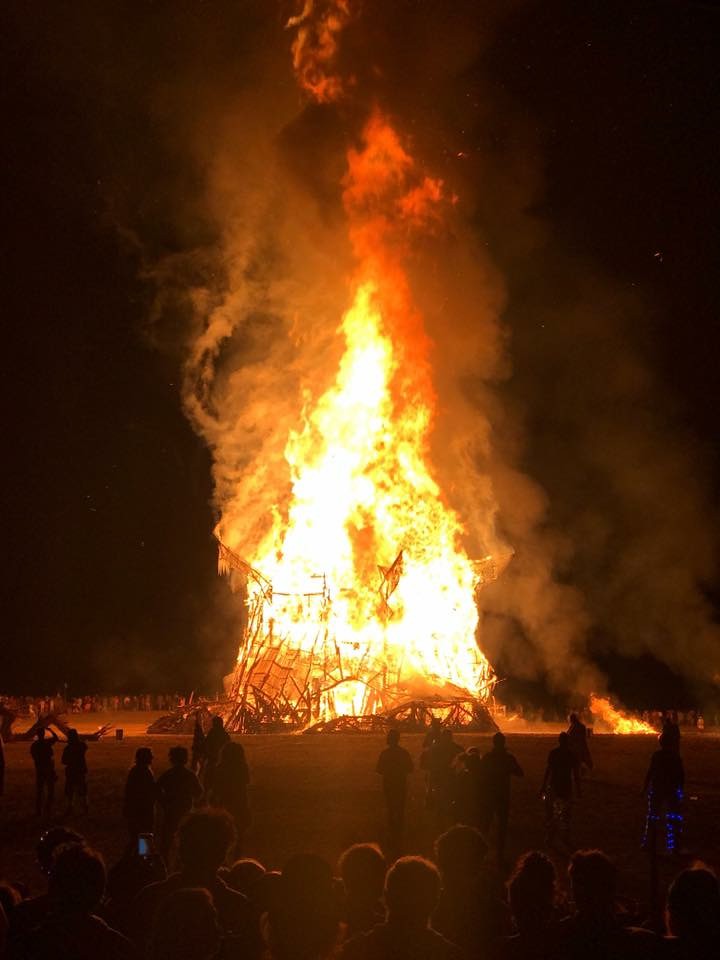 My day has been a blur. A warm fuzzy blur. We ventured out into the desert to check out some of the artworks on display. Hot as hell and with hurting feet. I need a bicycle desperately please! 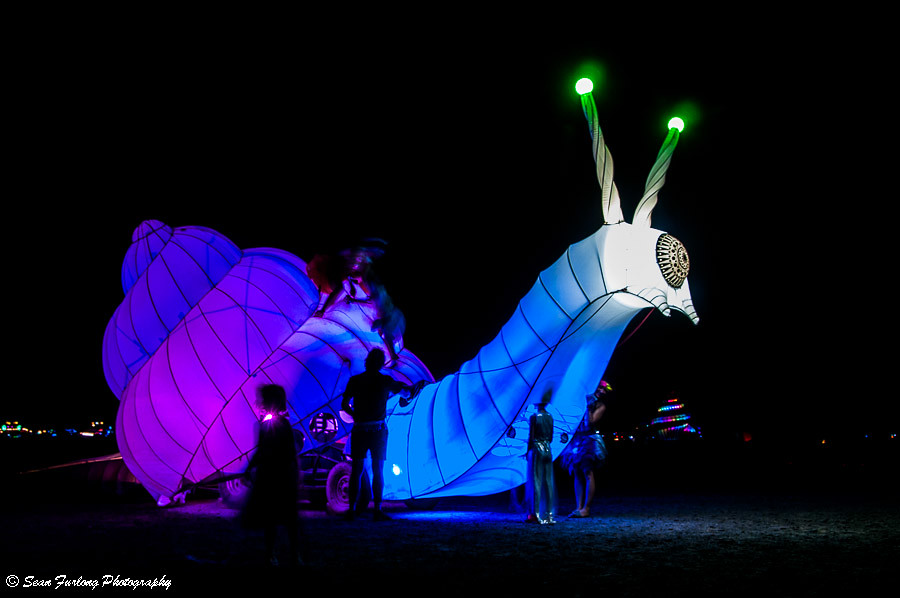 We stood in awe while watching the most beautiful sunset on the horizon; played a game of doubles tennis at the Love All Tennis Court at 10pm (Benny and myself won, obviously); braaied marshmallows on a fire; and set the Moulin Mirage dancefloor alight with our disco dance moves. John Travolta watch out! 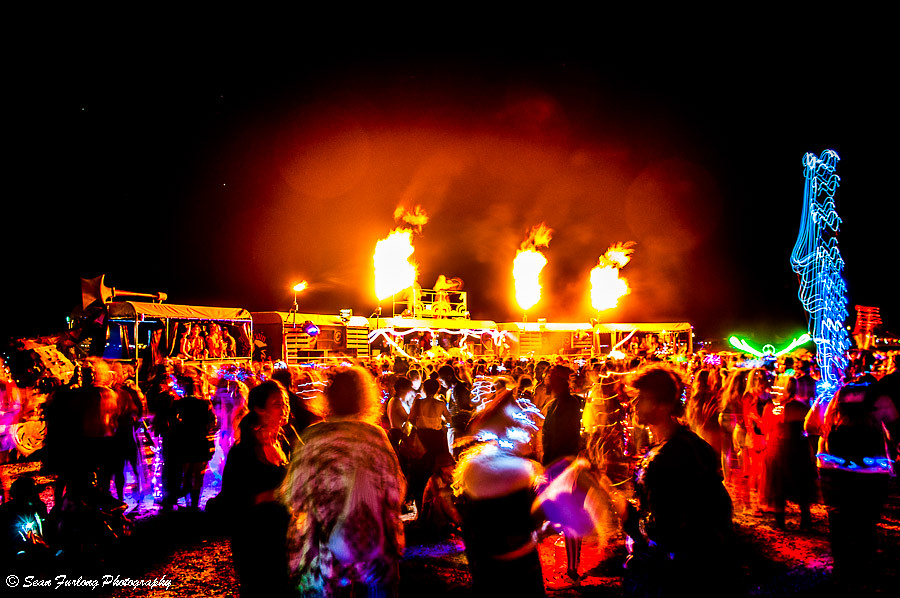 All this ‘down on bended knee’ shenanigans carried through until today when our disco mutant vehicle aptly named Tony Manero married another called The Sub Boogie Marine against the back drop of a giant sea shell. The whole wedding ceremony was organised by our crew with the guys in full force rocking lipstick and wigs. Sadly I missed that memo! 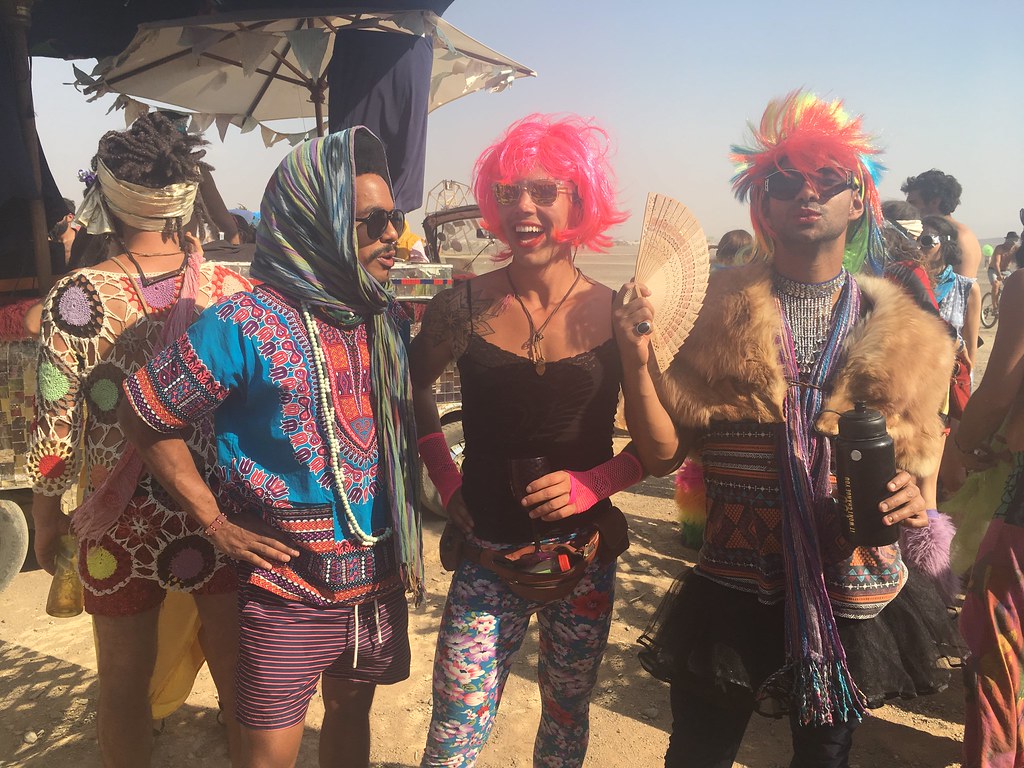 The wedding party and all our invited guests, which happened to be just about everyone who walked past us, danced to funky house beats under the scorching Karoo sun while being surrounded by folks in costumes resembling a scene from a Mad Max movie.

This all took place before and after one of the most magnificent wedding speeches I have ever had the privilege of listening to. The spoken word by one of our fellow campers Travis was pure poetry – we all just stood in total awe of his oratory skills and looked at one another thinking,“is this really Travis?”. 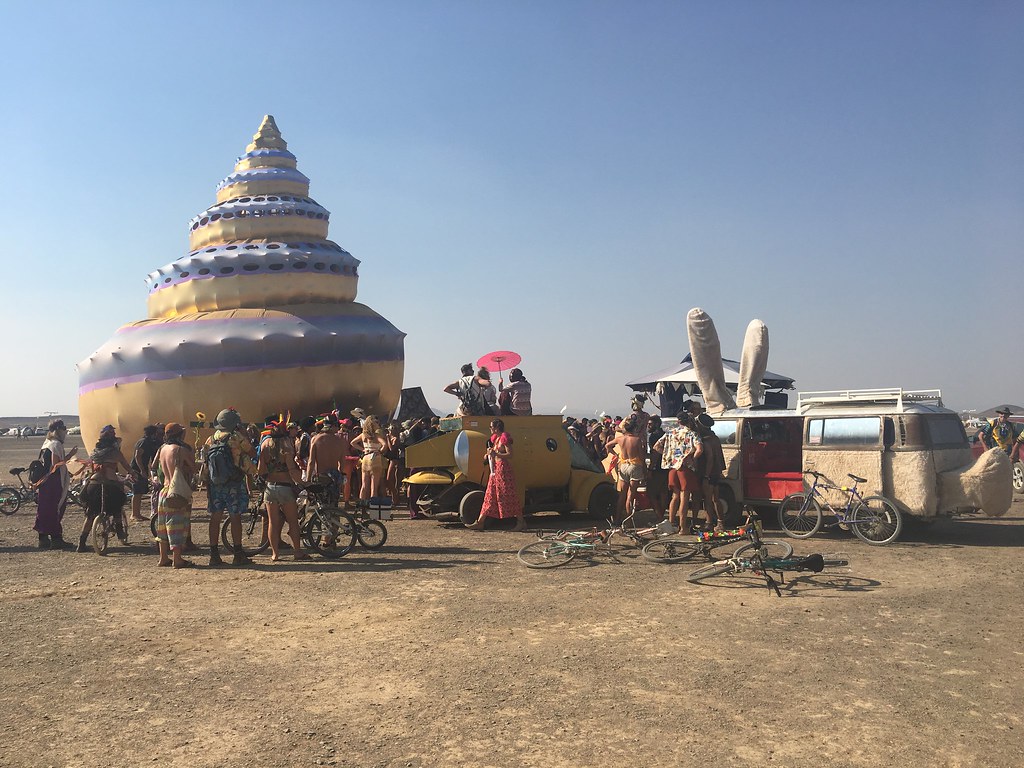 I’m in the car trying to stay awake to help keep our designated driver Jonny awake. After last night’s final throw down, I’m floating in and out of consciousness and can barely string together a coherent sentence in the English language. My subconscious is replaying the Burn ever so sweetly and my Blog brain is trying to store memory of what I learnt as a Burn newbie who lost his virginity: 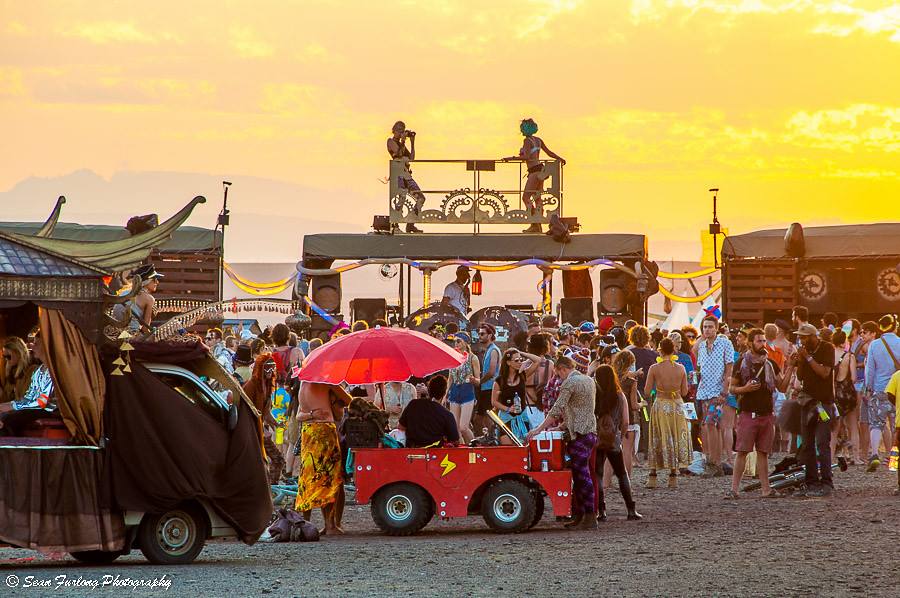 My exhausted brain has come up with these 10 key survival tips:

I could write a memoir about how this whole experience has changed my life and so many others in some way shape or form. The common thread I believe in all of this, is that not ONE major event at Burn will alter your reality; but rather small incremental occurrences which build upon one another until the lense with which you look at life through, shifts to a new paradigm. It will make an imprint in your book of life.

Now go out and PLAY! 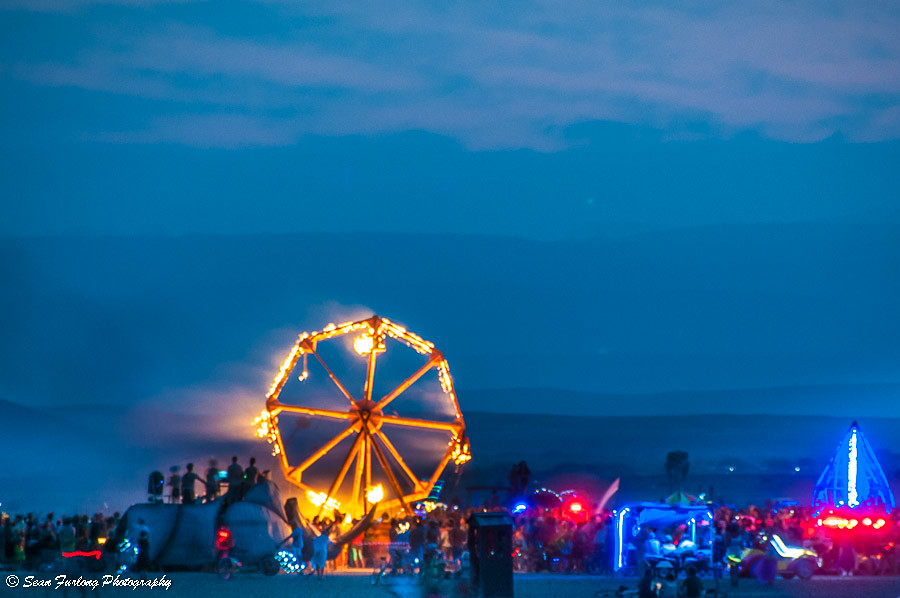 For more information on the AfrikaBurn Festival, visit the website here: AfrikaBurn. To see more incredible photography from the festival visit Sean F Photography and The Truffle Journal.