The rain drops fell onto my plastic rain poncho from Thailand as we rounded the corner in the midst of Old George Town, a UNESCO World Heritage site nestled between two core zones. The rain could not be more different here. The tropical, torrential downpour of Koh Samui had been replaced with a soft drizzle.

This road got its name, Ai Cheng Hang’ (Love Lane) from the local Chinese who said that all the rich men living on Muntri Street brought their mistresses here. My husband and I turned left only to stop and gaze at another welded iron caricature on the wall. I kicked my bike stand out and sought shelter beneath a cracking, white archway.

This iron piece of artwork depicted a Cantonese domestic work kicking her leg high up in the air whilst nursing a baby and wielding a kitchen utensil and duster. Because they did absolutely all kinds of house work, they referred to themselves as ‘Yat Keor Jet’ meaning ‘One leg kicks all’. We spotted more walking iron men across the street and a half a bicycle cemented outside a close coffee shop. 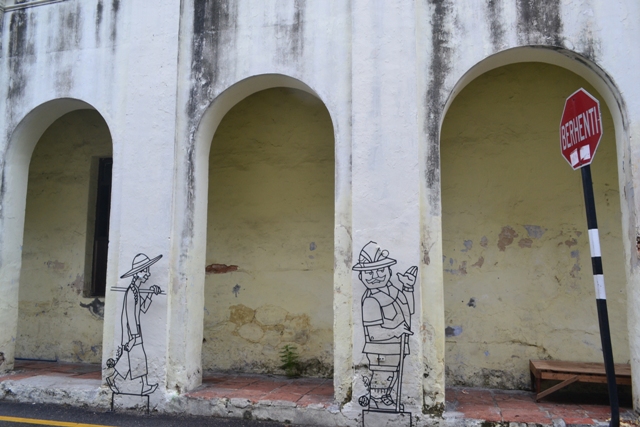 I was so intrigued to continue journey through this old world town injected with new, retro backpackers, trendy coffee shops and upbeat bars. I wondered whether all these minibuses constantly arriving with tourists were here for the same reason as we were-a visa run from Thailand.

In pulsating Chulia Street alone, hostels, guesthouses and hotels had their rooms full with those wanting tourist visas to extend their stay in Thailand. We heard the Penang State Museum was right beside the Catholic Church. Once we had cycled to the top of the street, there were too many cars on the road to chance taking a bike down, so we turned onto the pavement and continued left. We chained our bikes beneath the Frangipani tree beside the old tram and Rolls Royce in the courtyard. 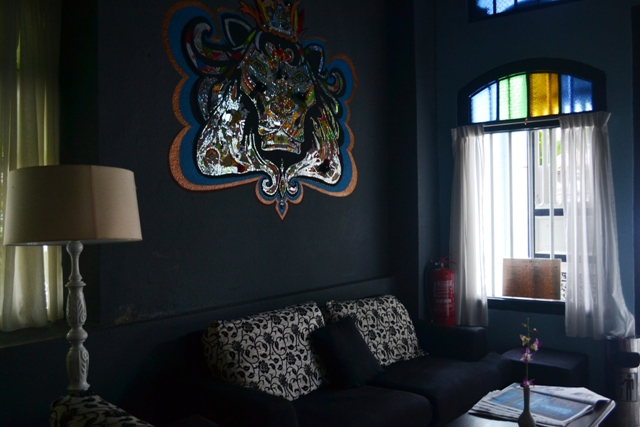 The retro interior of Reggae Mansion backpackers where we rented bicycles.

Once inside, the past and current lives of this town’s Malay, Chinese and Indian inhabitants were laid bare for us to see. There were massive Opium benches where the Chinese once relaxed on and colourful costumes of the Malay Boria who paraded and performed in the streets.

The Malays hailing from Kedar, Sumatra and Southern Thailand were interested in rice cultivation, boat building and fishing whilst the first Chinese settlers were traders who intermarried with Malays to introduce a new Baba Nyonya (Chinese Malay) community whose culture and language are still preserved today. The Indians of Penang served the economy as merchants, traders and money lenders. The temples built by its early citizens still stood tall today welcoming visitors to leave their shoes at the door and offer up thanks at their altars and statues. 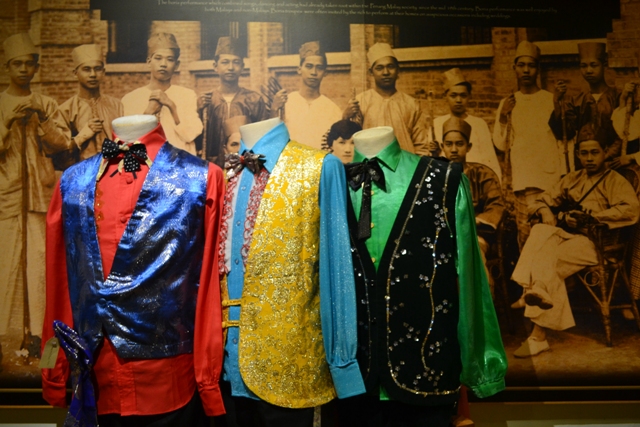 The colourful costumes of the Malay Boria.

I could not help but notice the diversity of the people of this town. We drove through Little India with its jade, fuchsia and royal blue saris hanging in shop fronts with the smell of garlic naan and curry cooking on the corner. Cheerful music reminiscent of a Bollywood movie flooded out the speakers until we were roads away and in an area which now felt like a completely different city altogether.

Chinatown passed us by with its dumplings, boiled chickens hanging from the vendor’s stalls and smell of discarded food in the exposed drains which rats would help themselves to later. I couldn’t help myself and had to stop on nearly every corner to shoot the precious painting of children laughing on a bicycle. The bike was stuck into the wall and formed a perfect combination to the hand painted art. I stood in awe of more murals from the same Lithuanian artist; a trishaw driver waiting for more passengers, a young boy reaching upward from a chair, a boy on a motorbike in front of an red, wooden door and an old man. 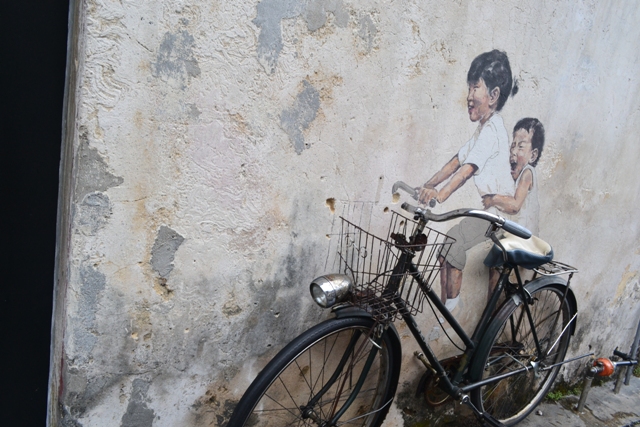 ‘Little children on a bicycle’ mural in Armenian Street by artist Ernest Zacharevic.

I tried to ignore the pain my hard bicycle seat was causing me and nearly crashed into a man hurtling down the road on a scooter. Even if the souvenir shop in this road was void of rainbow quilts hanging over the entrance and its array of beautifully crafted toys, I would still be drawn to this little store called ‘Living Story’. At its entrance was a man playing the most fascinating instrument. It had strings and keys and he was renowned for playing it for the past 50 years. He did not look up as I read the newspaper article just in front of him and eyed how his fingers skilfully manoeuvred to make music. Passersby were lured into the store to watch him in action and became mesmerised with his talent. 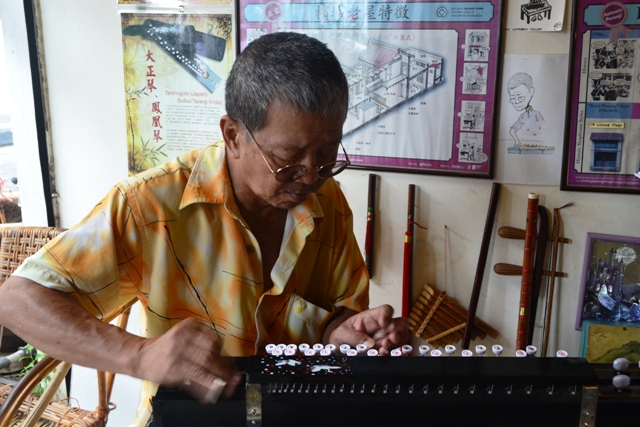 The music man in the ‘Living Story’ store.

We cycled past Fort Wallis along the water’s edge, the clock tower built to honour the Queen of England, the Pier and into more one ways than we dared to admit. The city was riddled with them and when it seemed too dangerous we stuck to peddling on the sidewalk. While the architecture of this ancient town were described as Late ‘straits’ eclectic, Southern Chinese eclectic and Art Deco style, this part of town echoed their English colonial past loudly.

As we made our way home we couldn’t resist Old Trafford’s cheeseburger stand and chatted to the Indian vendor about Durban, his life in Penang and his South African girlfriend. Guitarists strummed to a clapping audience inside an art gallery in our road and bold, Cantonese music bellowed from the studio next door to our Old Penang Guesthouse. Even though we were elated and exhausted from cycling through this intriguing city, it seemed that the city would stay awake long after we had fallen fast asleep. 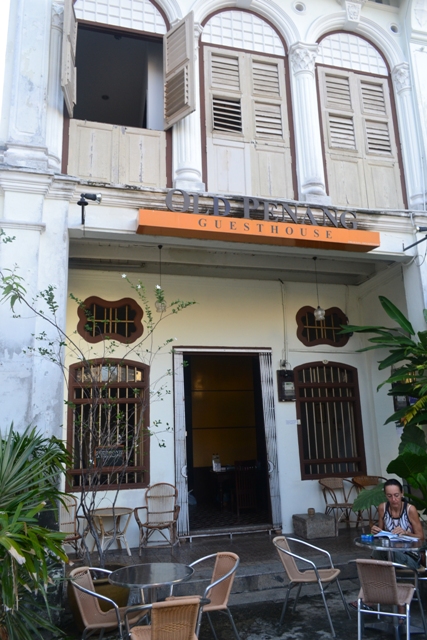 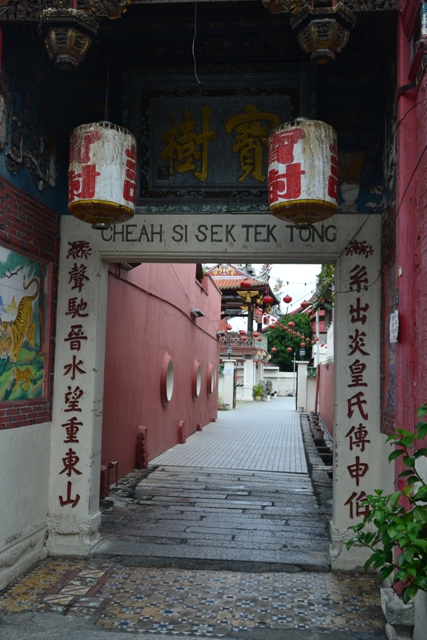 A temple in Armenian Street. 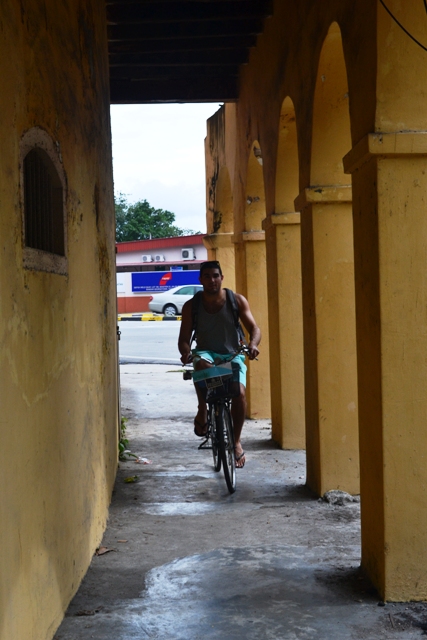 Cycling is one of the best ways to explore the city. 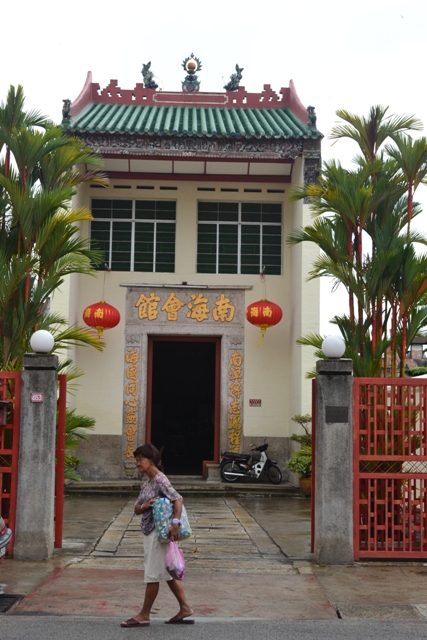 A local woman passing a temple on Chulia Street. 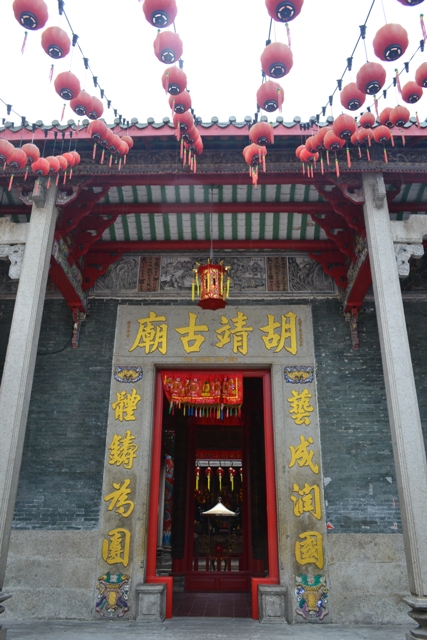 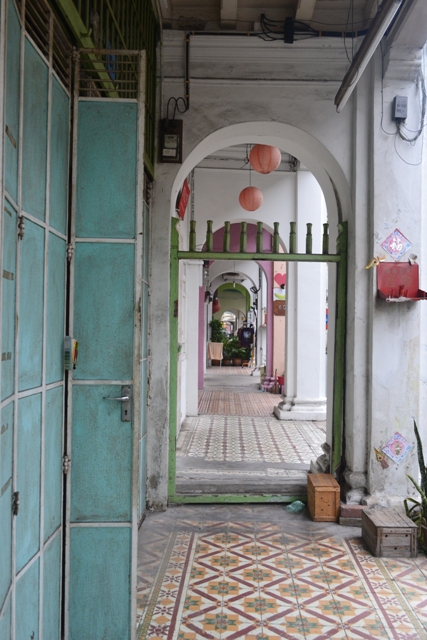 One archway leading through many more. 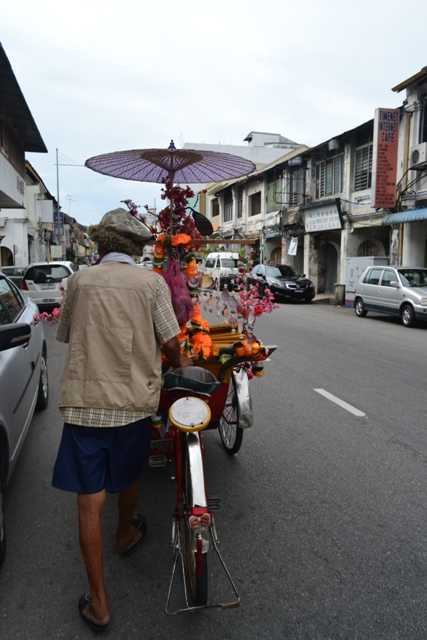 A paddler with his trishaw. 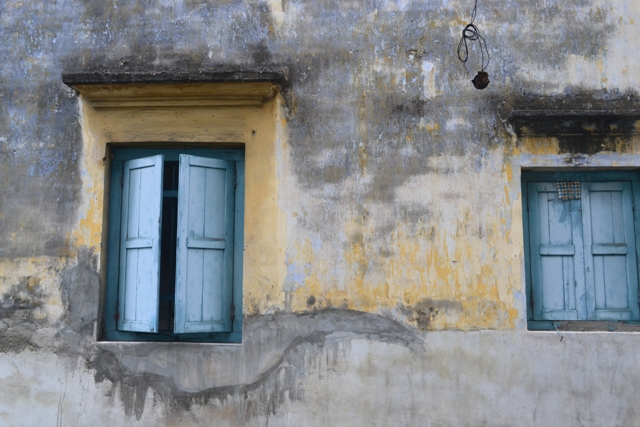 Blue shatters in an ancient building. 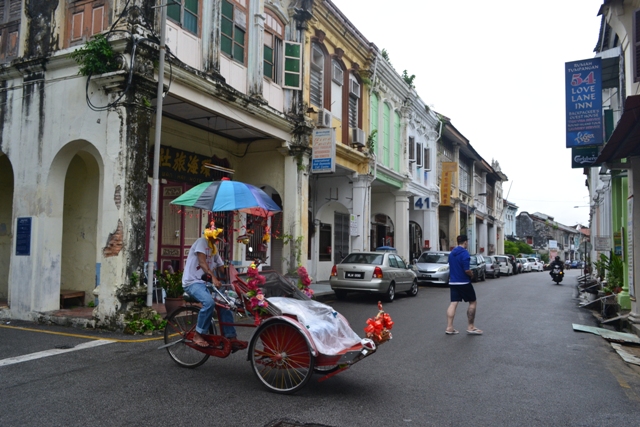