When I imagined what my Thursday morning would look like as a cold front pulled into Cape Town, it did not involve cycling through the township of Masiphumelele in Kommetijie. Snow threatened to fall on Table Mountain and the rain had already shown its face.

Our guide, Zwai, cycled a little way in front of us looking back every known and again to check that we were keeping up. I pulled my scarf tighter around my neck to ward off the chilly breeze and tried to focus on stopping by back pedaling and not with my hands as these bikes had no breaks on the handle bars. With Zwai beckoning us to stop outside a childcare centre, a dog running past me and blogger Abigail King, stopping in front of me, I tried to stop, forgot to backpedal and crashed lightly into her bike. I could see it coming, my brain just didn’t remind me to use my feet in time. It was all fun and giggles as we joked about these strange bikes. 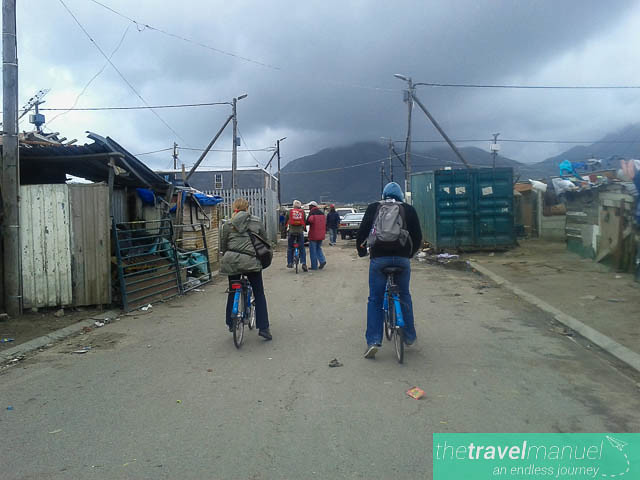 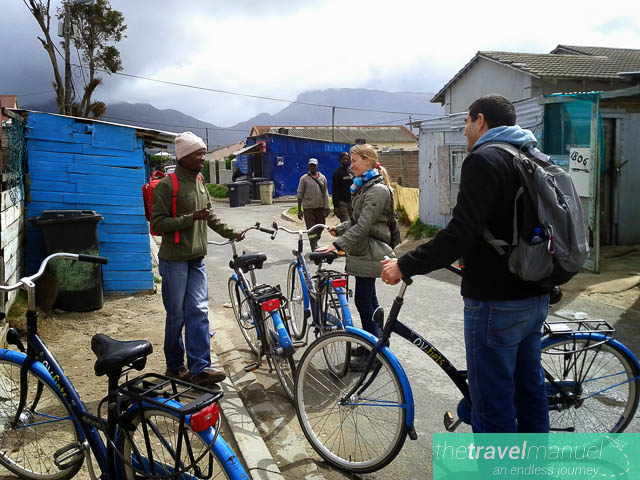 We parked our bikes within the gates of the Masivelane childcare centre and popped our heads in through the doorway. We were welcomed in by three local ladies who work here with 65 kids from 7am to 5pm every day. They were currently assisted by three volunteers from Britain. The 3-5 year olds sat quietly around red, yellow and green tables munching sandwiches, rice and other meals provided by their parents. It didn’t take them long to ask my name in Xhosa, I replied “Lauren” and some stared at me in fascination whilst the little girl beside me drew nearer and smiled. 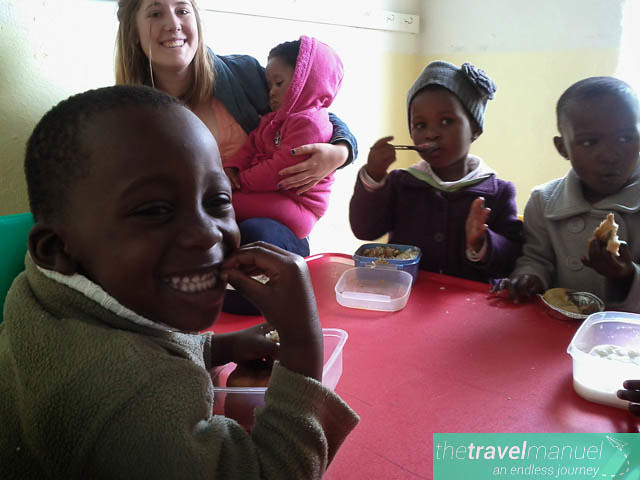 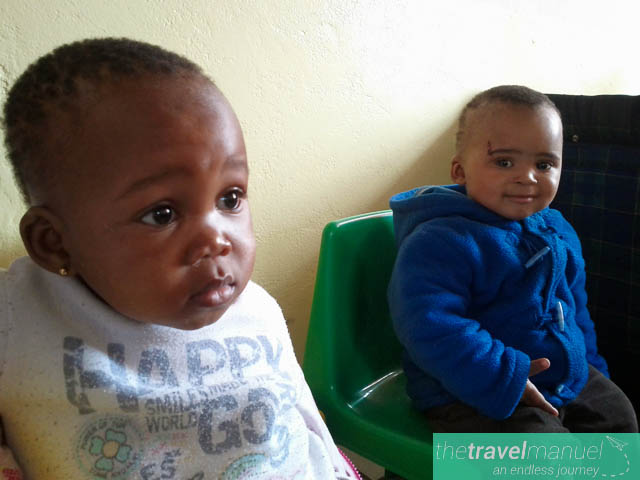 The babies were in the adjoining room. Two young to feed themselves, a staff member fed each one in turn from a bowl. I sat down on a tiny red chair, the exact same chairs I’d had as a child and held a beautiful girl in a pink jersey. She was too little to talk, but enjoyed the affection. Others napped in their cots, one girl walked around never smiling. But it was the young, chubby boy on the chair beside me that I absolutely fell for. His big cheeks seemed to grow even larger as he continually smiled and placed his little hand on my leg and drew nearer so he could lean on me. 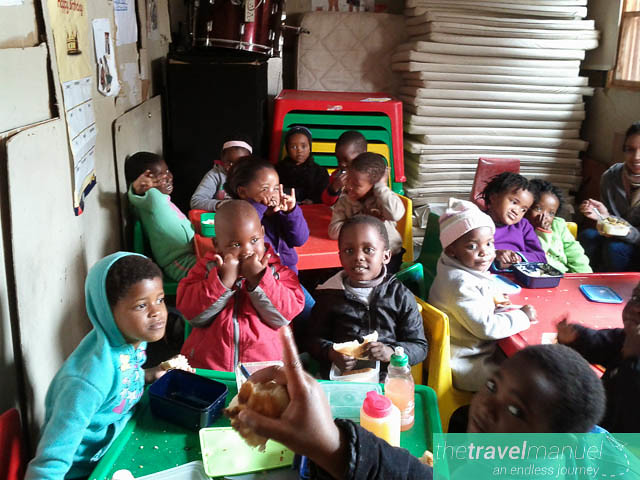 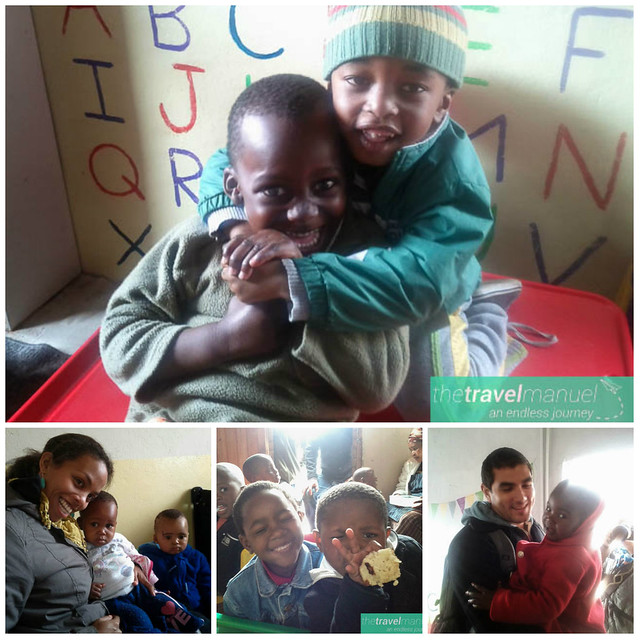 I didn’t want to have to leave him, but Zwai said it was time to go and before we were off, we visited the back room where the six year olds were eating. Way more confident and boisterous, these children asked our names, wanted to touch our phones and see the photos we’d taken on our cameras.

We peddled off to the workshop of Baby Shweshwe clothing, founded and owned by Ndileka. Growing up and watching her mom sew, she began to love it and at 19 she started renting her own sewing machine before she was able to buy her own. Before studying fashion design, she sewed after hours to feed her family. Once she obtained a diploma, she started her own label, Baby Shweshwe, clothing from children using denim and traditional Xhosa Sweshwe fabrics from South Africa’s Eastern Cape. Beautiful patterned t-shirts and tiny, colourful trousers were displayed on hangers. And a friendly staff member stopped her work behind a sewing machine to greet us and show us around. 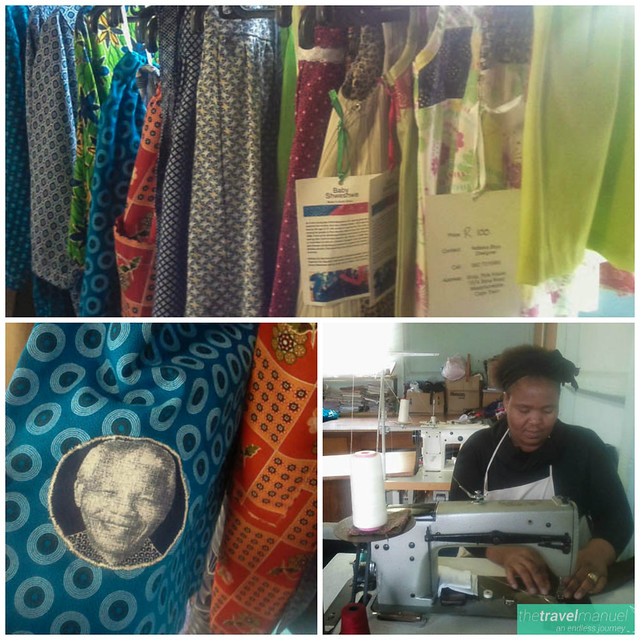 We said goodbye and just around the corner, we parked our bikes beside a dark grey, murky river which was partly being used as a dumping site. Due to poor sanitation and lack of a proper sewerage system, the smell in this area was something to behold. 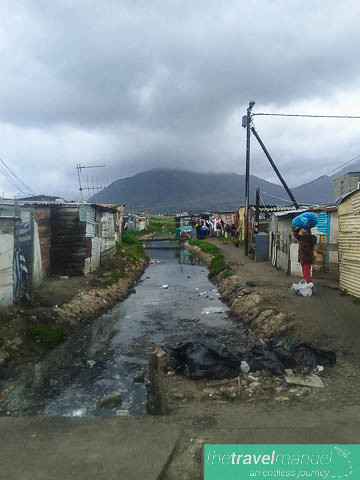 On foot we walked through the tightly packed shacks on patches of carpet which had been laid down to avoid the sand turning to mud. We passed washing hanging on lines, dogs wandering around and a mother with her baby wrapped to her back. 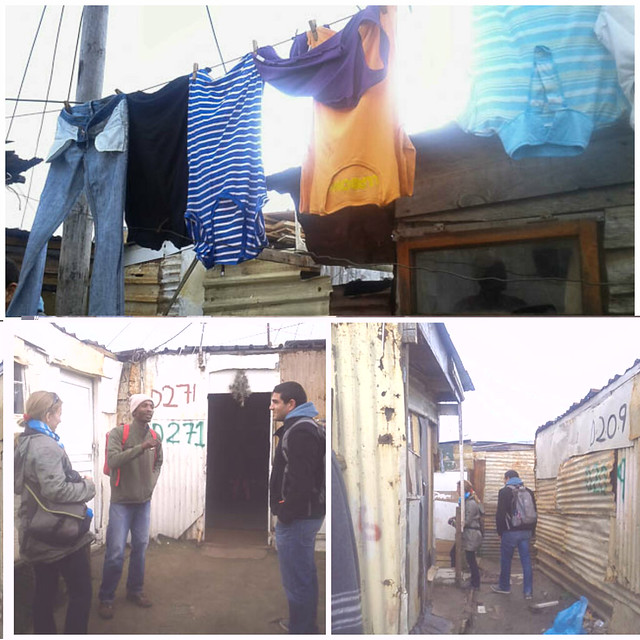 When we arrived at the Sangoma’s house, he already had two couches full of locals awaiting consultation. The role of the Sangoma (traditional healer) has been a very important one within many tribes and communities within South Africa. Zwai explained that whilst many young black South Africans prefer to go to Western doctors and hospitals now, their parents choose to consult these healers who are practitioners of traditional African medicine. Zwai told us that some can take many years to become a Sangoma but once they do it is believed that the ancestors of the Sangoma will hear from the patient’s ancestors what their particular ailments are and be able to heal them thereafter. 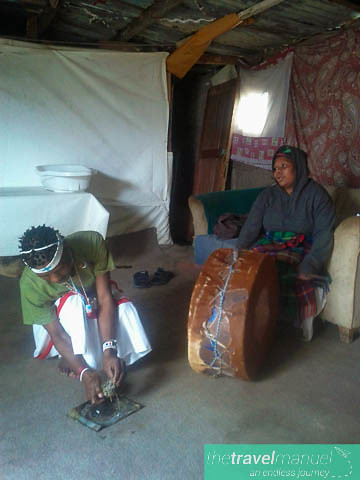 This particular Sangoma lit the imphepho (African Sage), whilst a woman behind him began beating a drum and others starting singing. Unbeknown to us at the time, this is the way they usually summon the ancestors. He danced around the smoking plant and tapped his feet onto the ground in quite a jarring fashion all whilst the songs continued. Sangomas are known to administer muti (a combination of plant, animal and minerals) to cure illness, spiritual difficulties and to bring luck, protection or love. 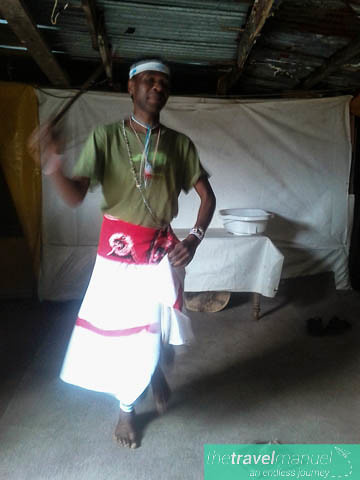 Just as the rain starting pouring, we found refuge inside Ngolozas restaurant and shebeen. In no time large, juicy lamb chops had been braaied over the coals as well as spicy sausage and delicious chicken wings. Together with pap, a staple for many South Africans, and beans salad we grew full so quickly as the rain continued to fall.
We said goodbye to Zwai who was already gearing up for his next tour of the day. Whilst a significant portion of South Africans grow up living in townships living in less than adequate housing, many wealthier locals have never been inside a township or get to experience a day in a life of a family who call this home.

Although this was not my first experience in a township or Masi in particular, I gained so much insight into the roles of various individuals within this community and its rich spirit of togetherness. For many outsiders looking in, their living conditions and lifestyles may seem bleak, but inside there is so much optimism, hope and a rich entrepreneurial spirit within its people.

Thank you to Cape Town Tourism and Awol Tours
for making this tour possible during the #lovecapetown campaign.

Even though this experience was sponsored all views expressed are my own. All photos in this post were taken with my cellphone camera.