When you’re on the beach or passing the coastline, you’ll recognise these women as the ones standing all alone looking far out to the backline to see if she can spot her man or the girl braving the not-so-beachy weather while huddled up in a hoodie with a book.  For those of you dating or married to a surfer, I’m talking about you my friends.  Much like the wife of a fisherman, you’re left alone for hours at a time whilst your man is out at the whim of the ocean whilst you eagerly await his return from the comfort of the car, a nearby coffee shop or the beach.

Here are some things that only surfer’s widows will know to be true about dating a man wielding a surfboard.   And for the rest of you; whilst you may find their bodies, surfing ability and the idea of dating a surfer irresistible, here is some food for thought:

–   You life and schedule will change with the wind.

Whilst you may have planned a wonderful afternoon together, if the wind is blowing in the right direction, you can kiss those plans goodbye.  You may already have commitments for the evening, but I’ve learn’t that when it’s offshore conditions I know that we’ll probably be late as he’s squeezing a surf in first.  He may suggest going to the beach, but before you know it you’ll be applying your own sun block and getting out your zoom lens to shoot some photos of him to occupy your time. 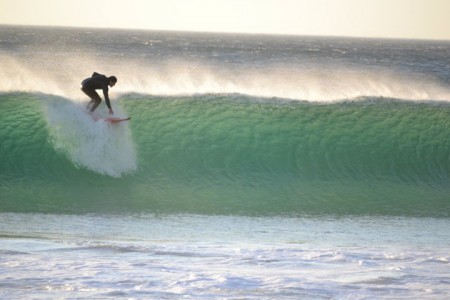 –   His moods will vary with the tides and quality of his surf.

You may never see your man as bouncy and energetic as he is post-surf.  It’s like his gummy berry juice or kryptonite.  So in actual fact, it’s good thing for you to encourage him to surf.  In the same way, that I get irritable and slowly go insane without dancing for long periods of time, he will lack lustre until he returns to the water.  A bad surf however can have the opposite effect.  If some punk cut in front of him, let go of their board and hit him by mistake or if he insisted on venturing out in bad waves, know that he may return grumpy.

–    The only time he’ll rush, is when the waves are cooking.

My boyfriend is by no means punctual. Whatsoever.  We’ll have birthdays, weddings and family gatherings and he’ll take his time getting dressed, locking up his place and dawdling.  But once the webcam shows cooking waves and he’s decided he’s going surfing, know that he will transform into speedy Gonzales.  The tables turn and you’re the one dragging your feet.

–   You have to be ok with everyone seeing him in his underwear.

At the parking lot of Muizenberg, you’ll see a lot of men in next to nothing.  (I can see the single ladies perking up already)  Guys have the ability to just strip down behind their cars in public and put on their wetsuits.   Everyone will see him in his underwear and this is not your cue to death stare passing females.  Your man has a hot body.  Be thankful.

Unless you have roof racks, know that his surfboard comes first in the car.  There have many times when it’s been him, his surfboard and poor me squished into the tiniest corner of the car behind him or if you’re lucky you’ll still have your place in the front seat but his surfboard will come between you.  Literally. 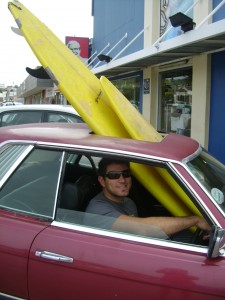 Whilst you may long to go to the Maldives, Zanzibar or even Croatia, he will not be interested unless there’s even a slight possibility of waves.   You’ll struggle to get him to relax on a beach and just tan for long enough never mind travelling somewhere where there are flat, tranquil waters.  But Bali, now there’s a destination that will make you both happy with beautiful beaches, zen-like resorts and perfect point breaks.

Because I hate being left behind and realise that “if you can’t beat em, join em” I have decided to start surfing too.  Whilst I’m quite fair weather surfer and refuse to go in when it’s chilly, I fully understand the strong desire to ride a wave for as long as possible.  There’s a freedom in taking your work clothes off, pulling that skin-tight wetsuit over your bikini ( except for the dodgy, ogling car guards) before grabbing your board and running off into the waves.  Jack Johnson was onto something when he sang, “its better when we’re together”, as we have such fun surfing together.  We could even be arguing but surfing is as therapeutic as it is exhilarating, so we’re happy chappies once we start surfing. 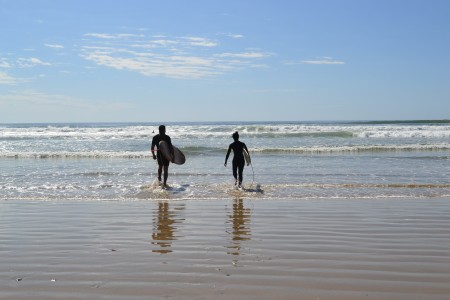 There are some things you can never do as a surfer chick such as apply nail polish an hour before or hope to have luscious, moisturised locks whilst surfing weekly.  But it was when we stood up on the same wave beside each other, rode the wave all the way to the right, cheering and high-fiving whilst on it, that I realised that giving up my surfer’s widow status was the best thing I could’ve done. 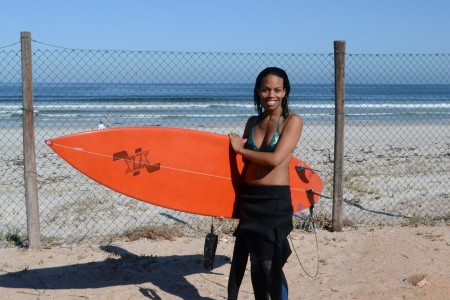 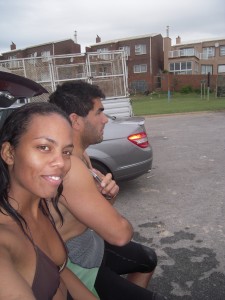 Lauren Manuel is the Founder and Editor of thetravelmanuel.com. Having launched the website as a solo traveller. Six continents later she still has itchy feet and wanderlust for adventure in all corners of the earth after exploring the globe with her family.