With my eyes pinched shut, my face turned to the right and my gun pointed to the left, I anticipated the onslaught. As we moved forward at snail’s pace, ice cold water was poured directly over me from a moving vehicle. I seemed to be bleeding, but it was only red dye in the water that dripped from my clothing. I opened my eye to see the group in the passing Hilux van that had attacked me. With that I lifted up by multi-coloured gun and fired. A direct line of water spurted out and hit my target in the face. This was a war, one using only water. This was Songkran. 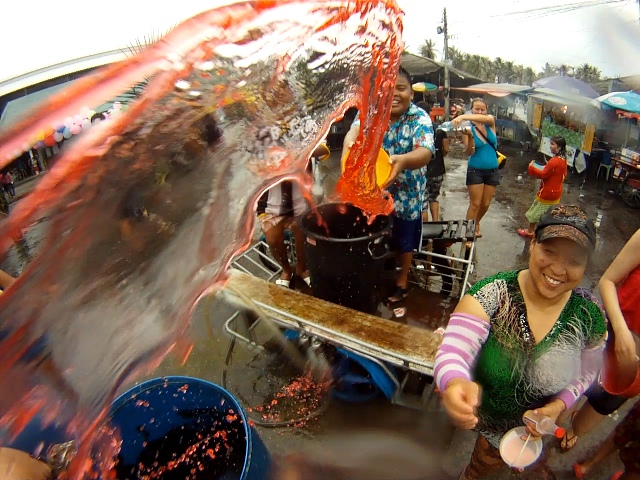 Songkran comes from the Sanskrit word “Sankranta” meaning ‘a move or change’ and in this instance the sun moving into Aries. The tradition of water throwing began has a means of paying respect to elders and family. Once water was poured over Buddha images, it was then captured as ‘blessing water’ and poured over the shoulders of family. The water symbolises the washing away of all the old and bad to make way for renewal and cleansing.

Once we walked into the main road near Thong Sala Pier in Koh Phangan, I knew that festivities had somewhat evolved since then. What was once a calm on-the-shoulder water sprinkling was now a total war of water. No one in sight was dry. Every human whether 60 or 3 years old was ready and armed with plastic water guns or heavy buckets. Girls in shorts and bikini tops screamed and ran for cover, children gleefully sprayed any passer-by and water hit me from every angle. 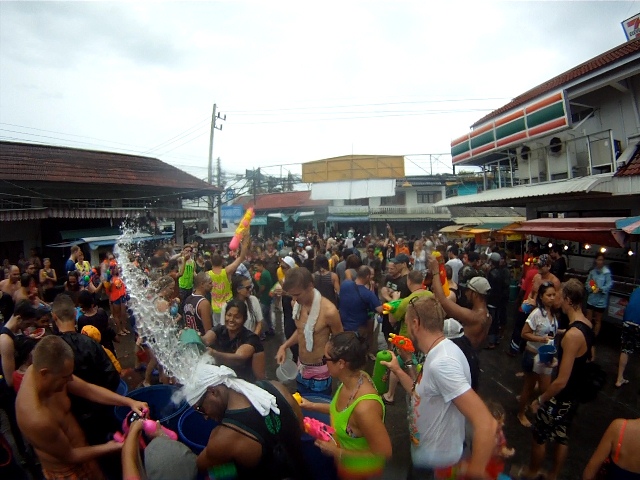 The only semblance of stillness occurred when a procession of elderly Thai people made their way down the street along with beauty queens in vans covered with roses. I think everyone, including myself, felt too bad to shoot them with water. At that point we weren’t even sure if the policeman was fair game, so we shot him in the back to be safe.
If your camera, phone and valuables were not hidden in waterproof bags, you were in trouble. Ours was tucked safely in our bike and we walked down the road, shooting onlookers who were either just standing there or who shot us first. 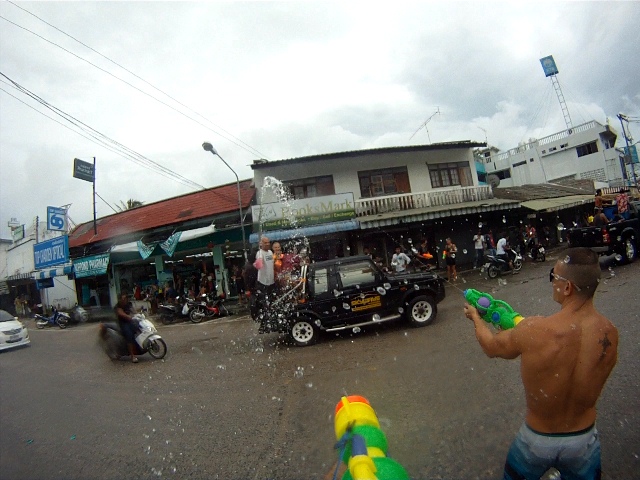 Large barrels of water lined the streets and those nearest to them had the main advantage. We were clever enough to join them and form part of the attack as groups of happy people drove by in their vans. We would take turns to see who could do the most damage to the passing party. I must admit that the people with the ice cold waterfall water definitely won. And those who’d mixed tiger balm into their paste and smeared it onto the cheeks of unsuspecting revellers. 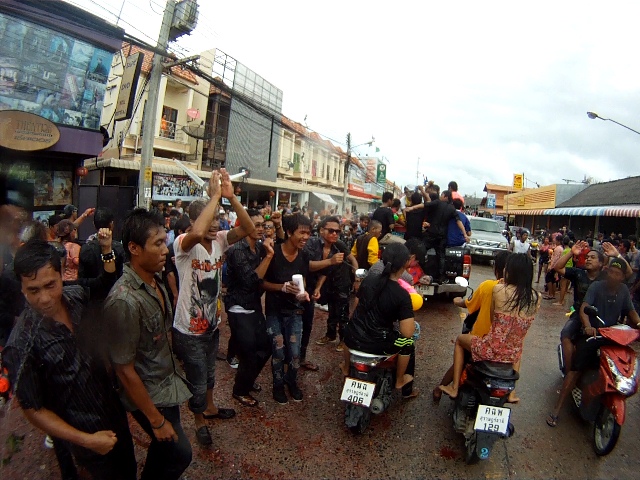 April is usually the hottest month of the year in Thailand and for the past two months there hadn’t been any rain on Koh Phangan and temperatures of over 34 degrees where we live in Samui. But this weekend of all weekends, it was overcast, slightly cooler with a bit of rain.

Thai guys danced around pouring talcum powder on everyone. Powder was mixed with water to form a paste which was then smeared onto cheeks and bodies. I joined the crowds in dancing to the blaring music, squealed when I was hit and laughed when I was shooting others. The town was awash with white powder, colourful water, drenched crowds and liquid flying through the air. Even the policeman who attempted to keep the peace in the road had to succumb to it all and ended up wet with red markings on both cheeks. What an incredible to celebrate a New Year. As I hung up my water gun for the day I wished this was how we celebrated New Years at home. 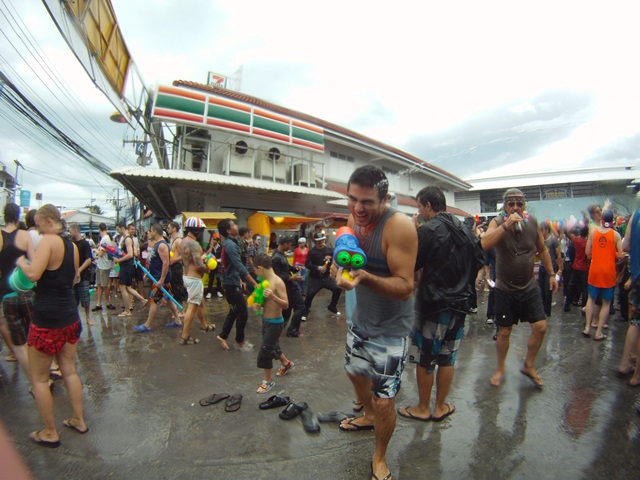 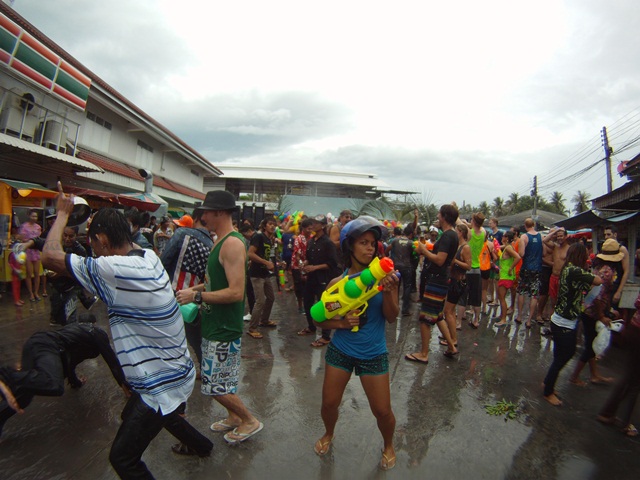 Ready and armed with my loaded gun. 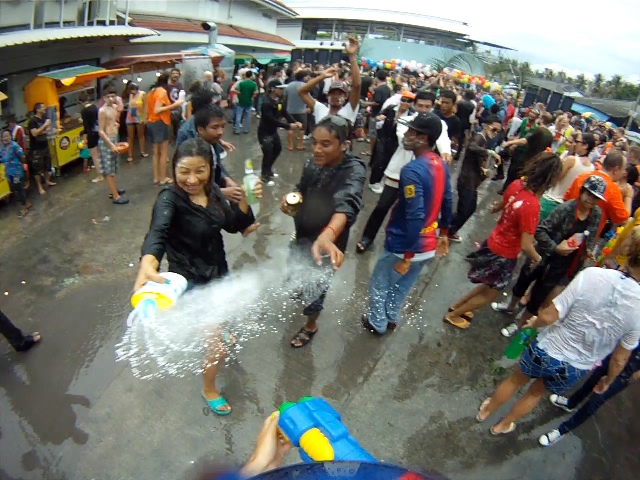 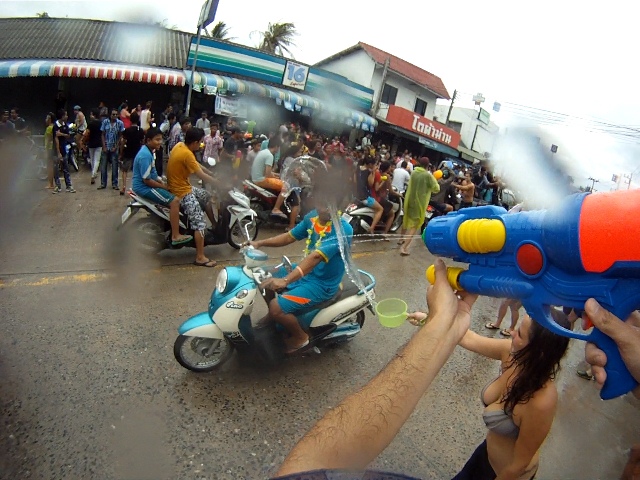 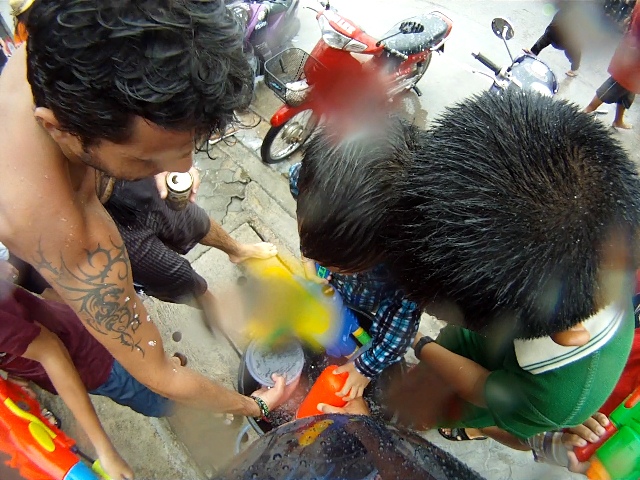 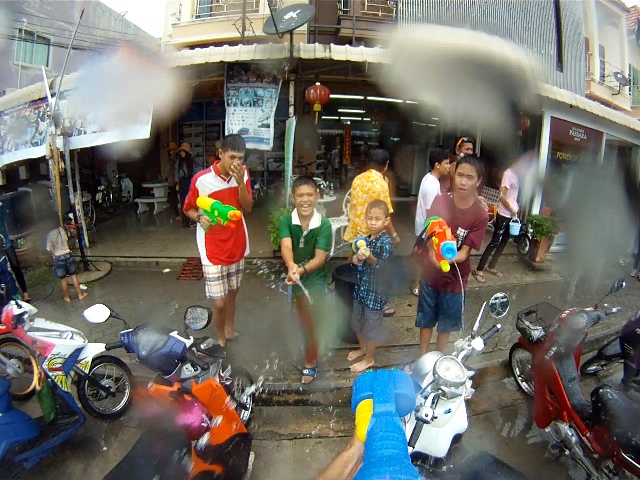 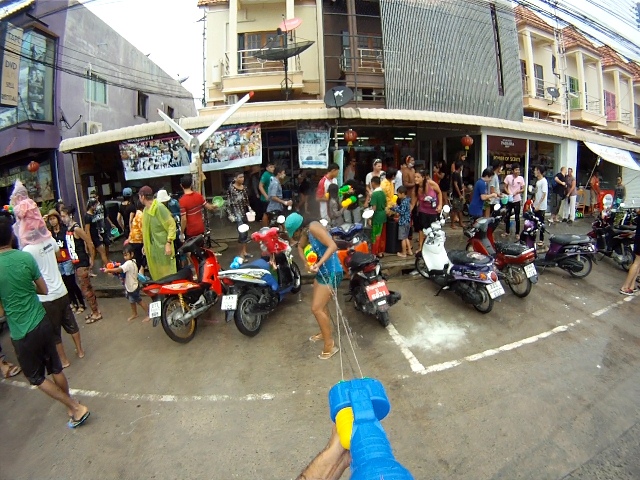 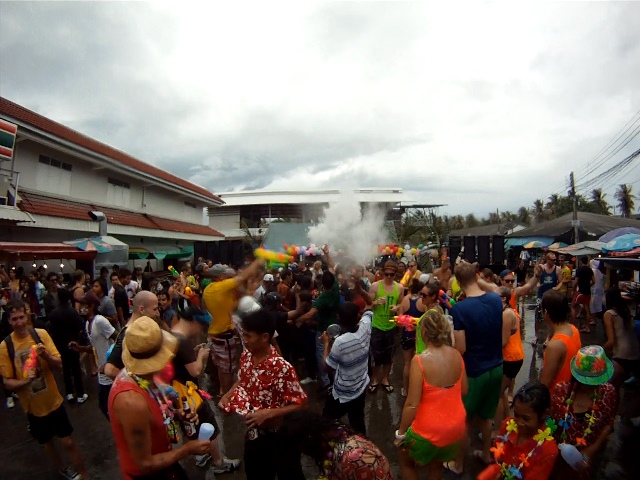 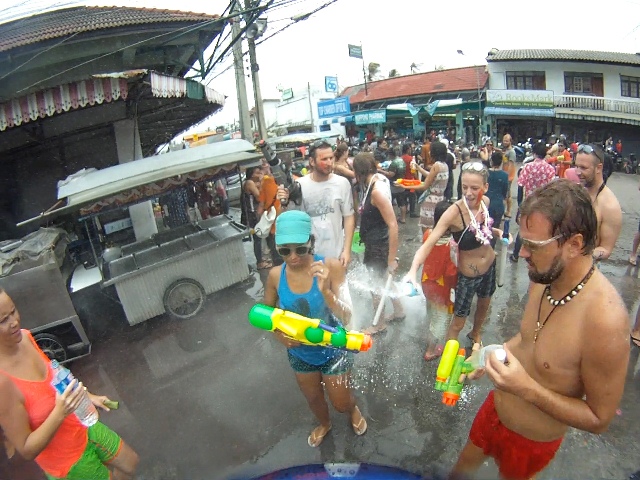 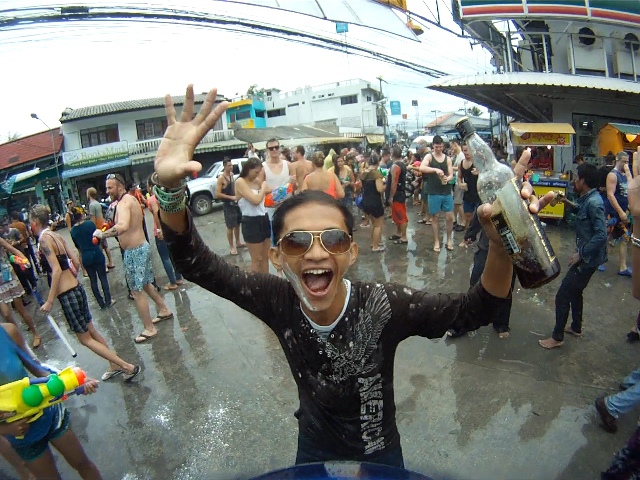 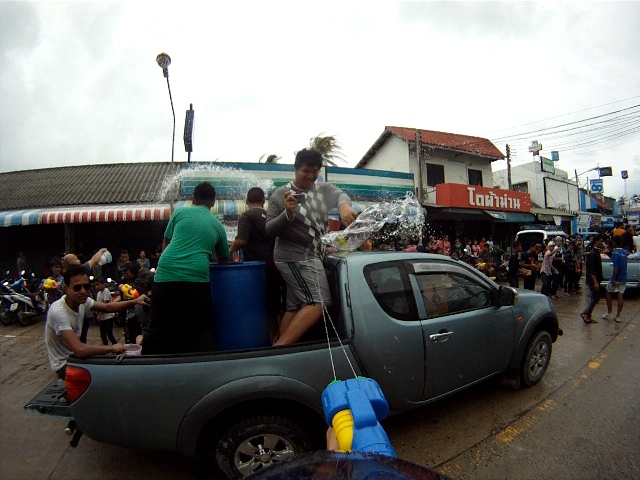 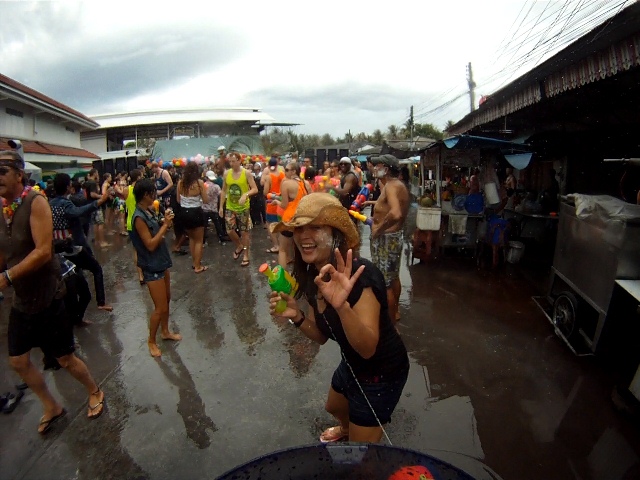 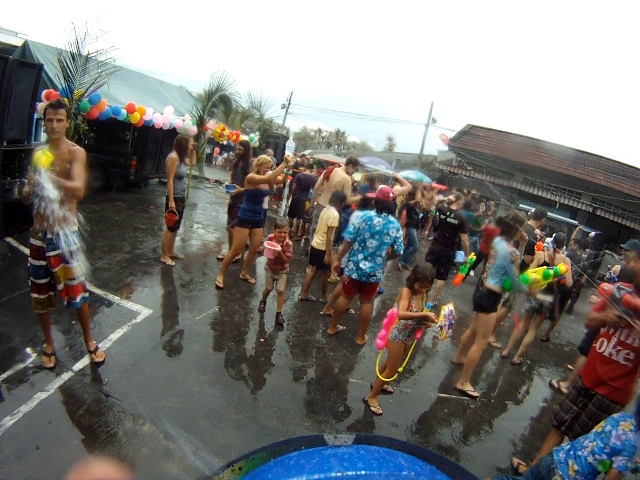 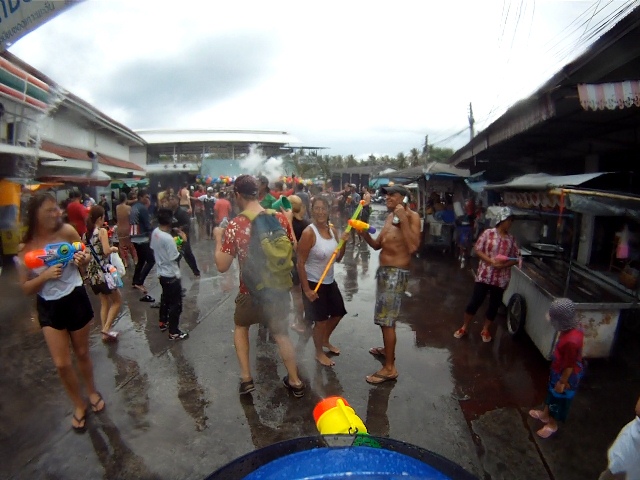 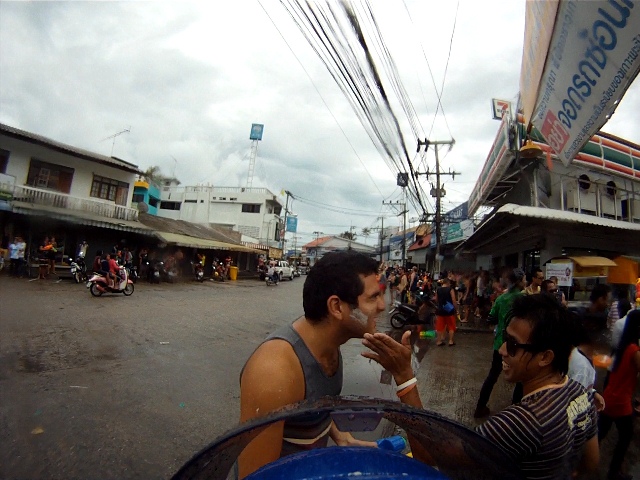 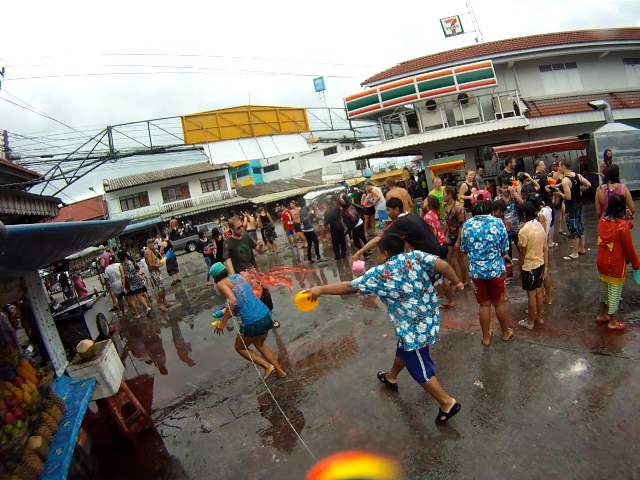 All photos were taken by Vaughan McShane and are subject to copyright.