What on earth is going on?

I’m sitting on a rickety bench makeshift warehouse. Daylight filters in through the rafters, dimly illuminating the ring in front of me. The smell of sweat, dust and cleaning fluid assails my nostrils. No, I haven’t been kidnapped.  I stare eagerly, along with hundreds of other spectators into the ring which dominates the centre of the room. Two figures enter it. Both of them are women in their twenties, surreally they are clad in the traditional clothing of a Bolivian woman. Their thick, layered skirts swish around their ankles and atop their heads sit precariously placed bowler hats- a fashion they adopted from British rail workers who lived in the region over a century ago.

I have encountered these women before. They sit calmly at the flea market it El Alto, Bolivia’s second largest city, which sits adjacent to the capital La Paz. If you ask politely, they may let you take a picture of them in their full traditional dress whilst they sell their wares. The two combatants face off. The fighter on the left utters a blood curdling yell and charges at her opponent. Adroitly, her adversary steps to the side, snapping her arm sharply into the throat of her aggressor, who is thrown to the mat with a thunderous crash. We, the audience, roar our approval. I have never encountered these women before. 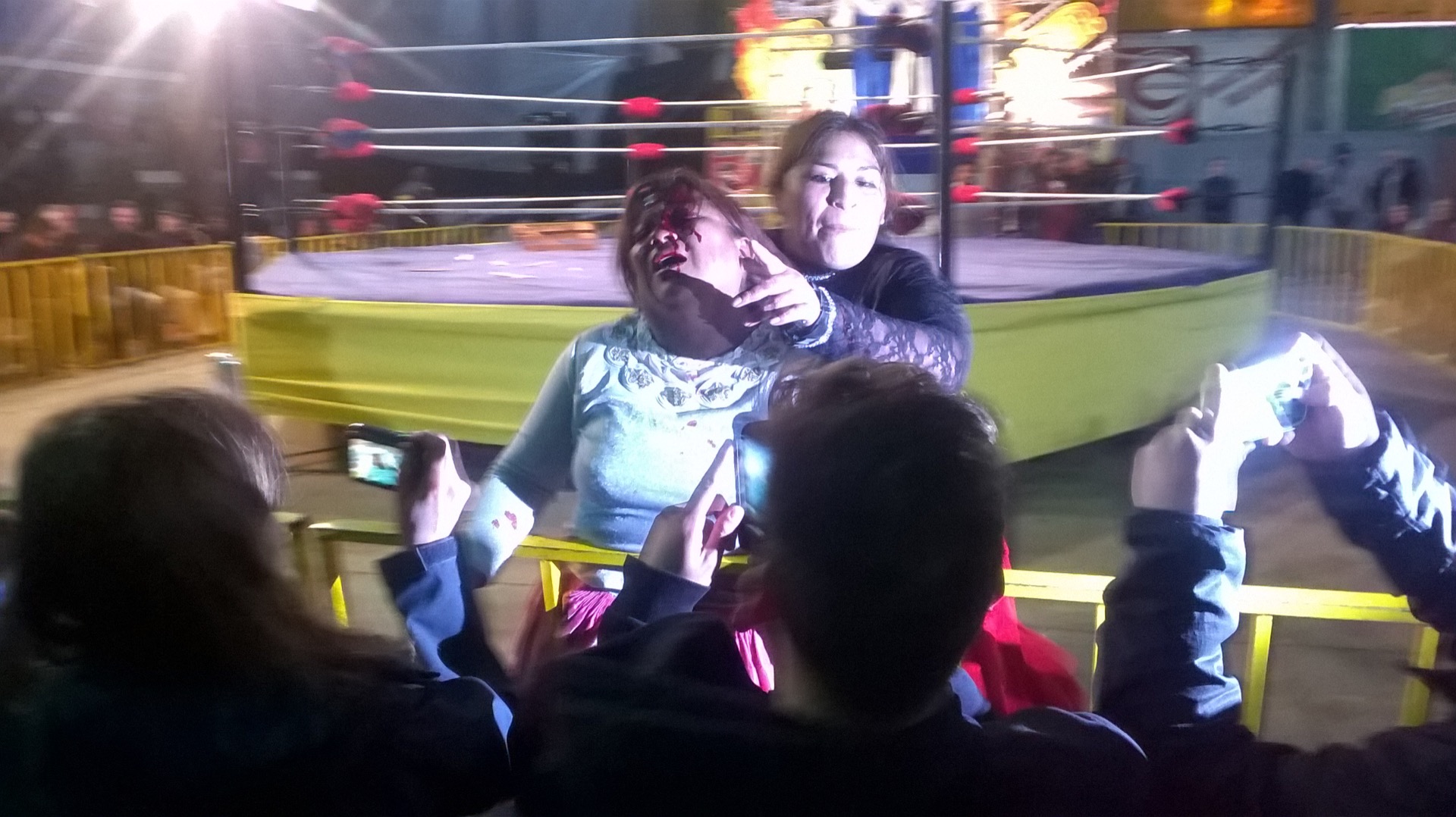 Getting up close and personal. The reigning champion humiliates her rival at the end of scintillating bout

Welcome to the world of Cholita wrestling.

I should add a little context.

How did I come to be here?

A few hours earlier, I was sat in my hostel room in La Paz, wondering what Sunday evening would bring. I had already explored the markets and taken in the rarefied air of Bolivia’s capital. On one of my speculative trawls of Google yielded a suggestion, ‘Cholita wrestling’.  I’d never watched live wrestling before, unless you counted highly unscripted bouts which took place at 4a.m outside a kebab shop in Birmingham. I was intrigued.

Back in the ring, a grudge match is taking place. The matches follow a format similar to that of WWF- a likeable protagonist faces a baddy. It’s a simple format, but a crowd pleaser. One Cholita, undoubtedly the villain of the piece, reaches under the ring and grabs a chair. Her opponent gesticulates wildly at the referee before turning to plead with her chair toting rival. I’m no Spanish linguist but I’m pretty sure I could hazard a translation.

“Can’t we settle this over a cup of coca tea?”

Apparently not. The chair is acrimoniously smashed over her back. Jagged wooden fragment fly into the audience, catching a woman two rows behind me, blood begins to pour from her face. I laugh delightedly about the cholitas sheer commitment to involving the audience in the drama. Yet as the woman gets up and lurches towards the bathroom, still clutching her face I realise this was unscripted, she has been genuinely hurt by the splinters. The audience gape at each other like wide eyed children.

Back in the ring, meanwhile, the performers are unperturbed. The final match is in full swing. An older, more experienced fighter faces a young firebrand of a challenger. The youthful fighter shimmies up the turn style, catapulting herself onto her opponent’s shoulders, before sending her flying, head over heels with a twist of her legs. It is a move as precise as it is fearsome.

Just as the youthful challenger seems to have the better of her opponent, she makes a crucial mistake. Like a naive bond villain, or Donald Trump before the US mid terms, she stops to taunt her opponent. Alas, a cruel twist occurs. A male ally of the defending champion sneaks into the ring and sucker punches the unsuspecting fighter. Betrayal! The two fighters dish out a thorough beat down on the challenger. This culminates in her being dragged into the audience, face theatrically bloodied. To cut a terrible cliché, the crowd goes wild and the show ends to rapturous applause. 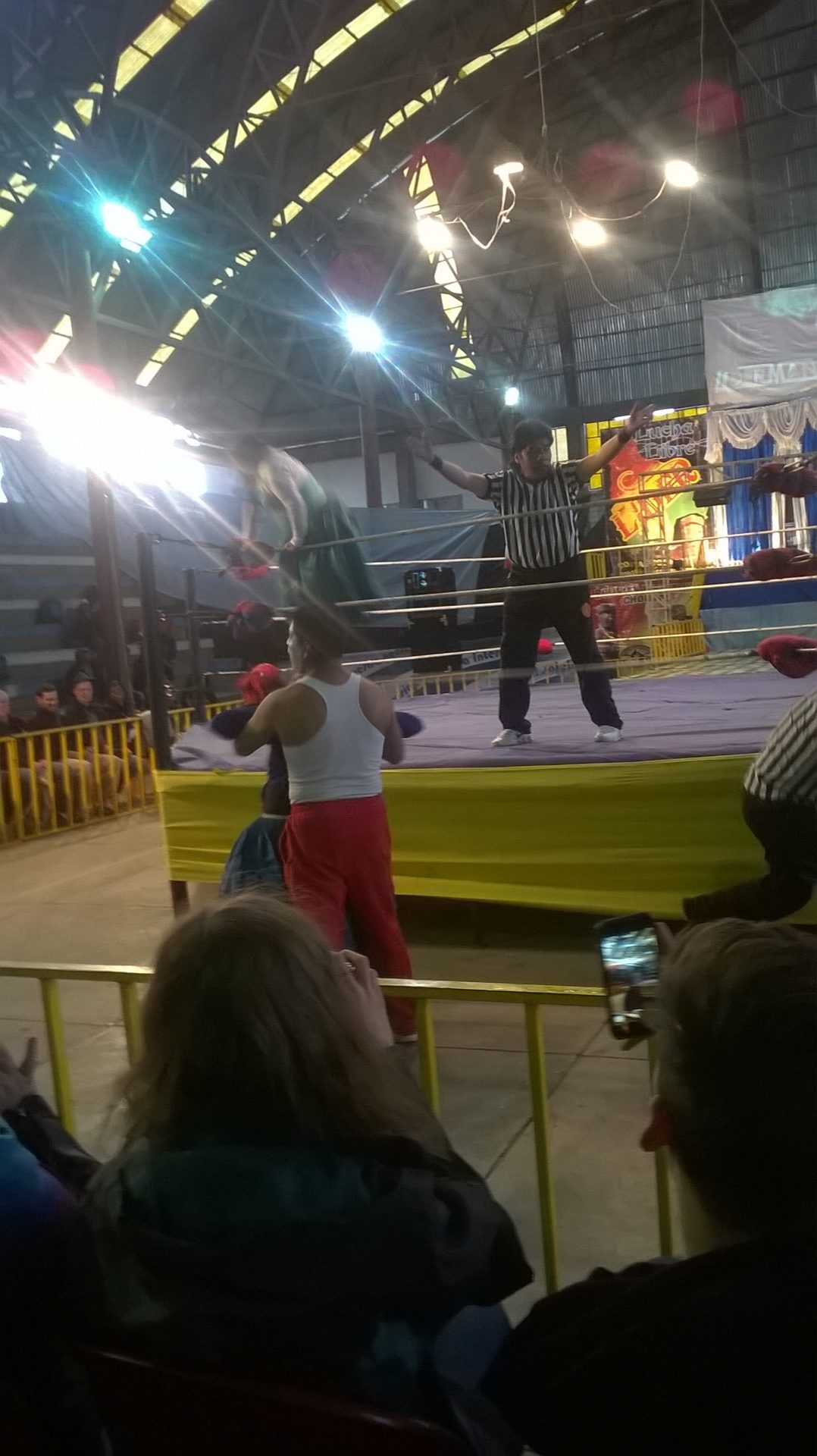 Treachery most foul. The challenger is held by an accomplice whilst the defending champion recovers her wits.

More than a wrestling match

The entire match, of course, is scripted. But don’t let that detract from the level of commitment and training needed to pull off stunts like these. It’s infinitely harder to pretend to grievously assault someone than it is to simply punch them in the face. Yet what makes these women different to their American WWF counterparts, what made me really want to see the show, runs deeper than the scripted violence. I came to see the Cholitas themselves.

Whilst their American counterparts are televised and earn millions of dollars, these women are paid around $13 per match. When not training, they are busy working second jobs. Their devotion to their roles is staggering. Furthermore, they have come to represent so much more than performers; they are symbols of empowerment and equality. The majority of El Alto’s population are Amerindian, 85% of them hail from a Queucha or Aymara background.

The wrestlers’ ethnicities mirror this demographic. Those from indigenous backgrounds still face massive discrimination in Latin America. Indeed, the word ‘Cholita’ initially carried negative connotations for Bolivian women of Amerindian descent. The wrestlers, however, have repurposed and altered the meaning, so that it becomes a term of empowerment.  To the audience, the word Cholita embodies many meanings: a protagonist, an artist and an entertainer who proudly celebrates one’s heritage.  Oh, and the gregarious fighters are more than happy to pose for a photo at the end. 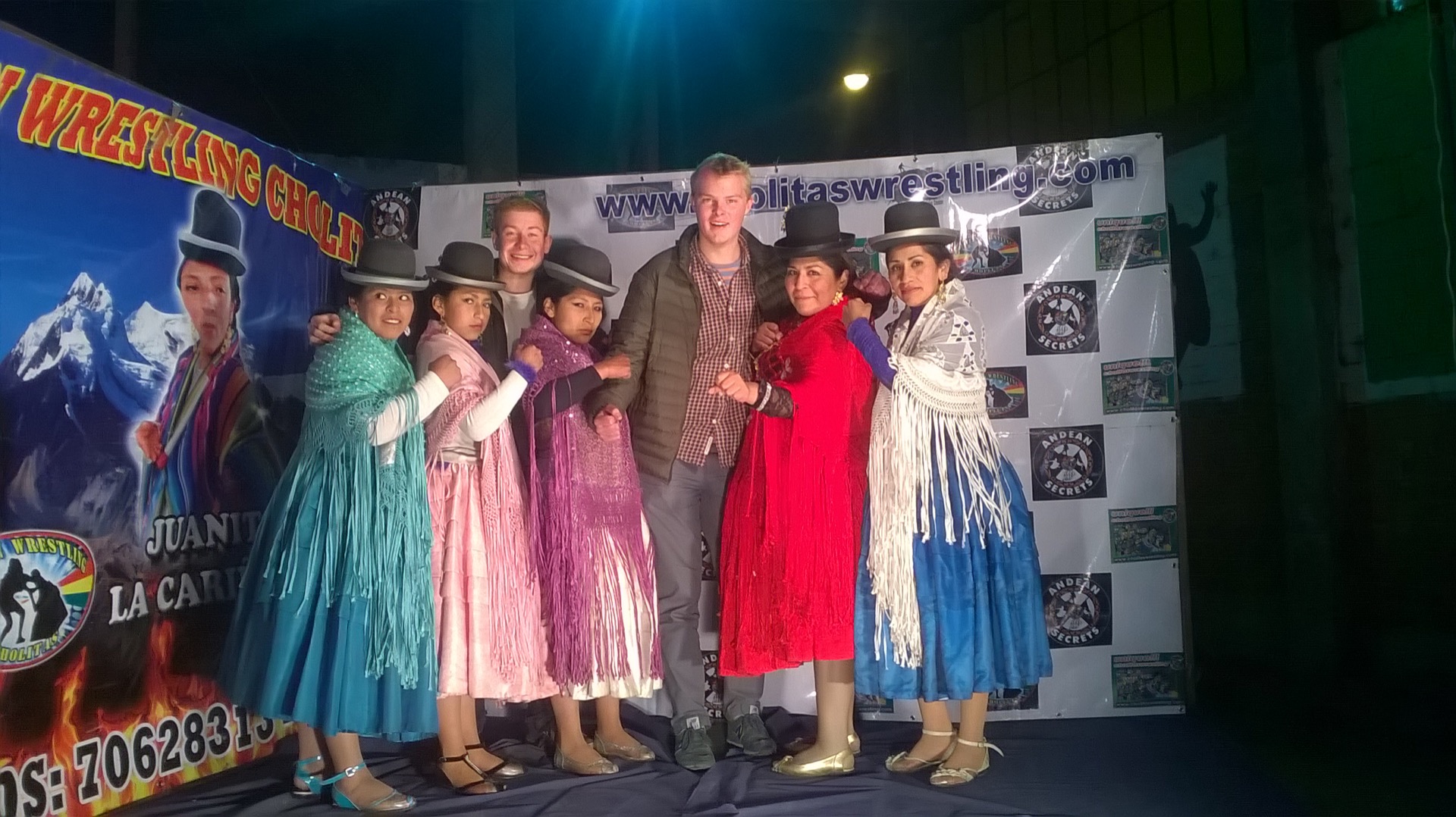 A post- match pose and a fun fact. Bolivian women who are married wear their hats directly on top of their head, whilst those who are single do so at an angle.

Shows take place at the Multifunctional centre in El Alto on Sunday evening. You can travel there yourself by catching a bus from San Francisco church, which is located centrally The Plaza San Francisco. A return bus ticket will cost you 4 Bolivianos and an entry ticket $7. There are also a number of tour companies which take you. Redcap tours charge $25 and begin at Oliver’s tavern at 2 p.m. Following the match, they transport you back from El Alto on the cable car, which provides breathtaking views of the city. You can find a link to their website below

La Paz sprawled out below the cable car. The city is 3640m above sea level. Allow yourself time to acclimatise before making the journey to El Alto.

Born and raised in South London, travel writer and delinquent James Diffley has taught around the world and now calls Canada his home. When not writing his travel blog he can be found gallivanting around Ontario in search of a decent pint.