You are here: Home / Featured / Another Day in Paradise – Bulungula
379
SHARES
FacebookTwitterStumbleuponBufferPinterestPocketGoogleWhatsapp
Mail 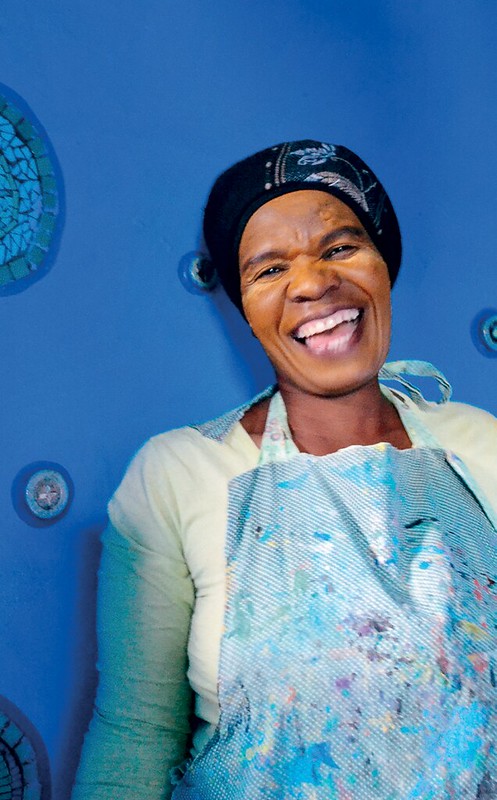 [dropcap]T[/dropcap]he warm glow danced on our faces to the rhythmic beat of the bongos. My wife Lauren and I sat beneath the star- laden skies, listening to tales in the familiar but foreign language of Xhosa. We hadn’t left our country and yet here we were, finally, in Africa. Campfires have a way of drawing all sorts together: the young English couple to our left, ironing out the lastkinks of their social awkwardness with alcohol, the deep-thinking American researcher to our right with a hunger for knowledge, the Dutch lady, a dredger by trade, and, sitting across the flames, a diviner who always managed to speak with a certain mystery in her voice.

Our adventure began at the turn-off near Umtata where the Eastern Cape roads began to deteriorate with impressive speed. Potholes were grouped in clusters, almost mocking our lack of extra tyre insurance as we passed by. Slowly, the roads wound us in. The hills are endless here and captivating, too; buildings and shop fronts are replaced by cows, goats, sheep and turquoise-coloured mud huts. 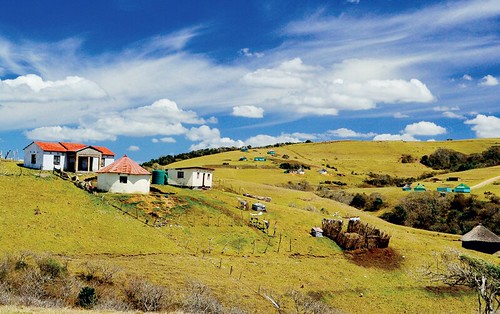 Eventually the tarmac became nothing but a distant memory and my smartphone’s Google Maps failed me for the first time. Lauren sat in wonder, clutching our printed map in one hand and camera in the other, uttering directions like “in 5.4km at the wide tree take a left…”

These words guided us over the roads, which had reached the bedrock in several places. The journey had the feeling of a treasure hunt. Along the way we witnessed men thatching the roofs of rondavels and young children on adventures of their own. Through it all we only got lost once, corrected by a friendly woman carrying a large bundle of wood on her head.

When we first laid eyes on the winding rivers I knew we were close. The hill troughs began to explode in lush green thickets of grass and trees. Barely 10 minutes and a rather intimidating descent later, we were perched at the crest of a hill looking out over an enchanted scene. 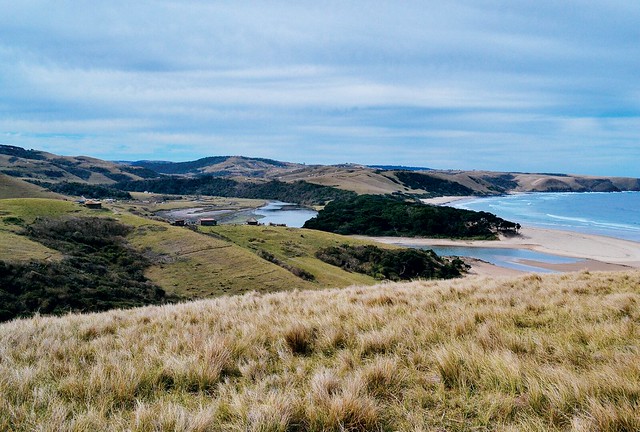 Rivers found their ends in the ocean, brightly coloured huts were dotted over the landscape, Xhosa people went about their daily lives, cows grazed on sloping hills and young boys tended to unconcerned sheep. As we began the slow descent to our accommodation at Bulungula Lodge in Nqileni Village, it felt like we had arrived in paradise. 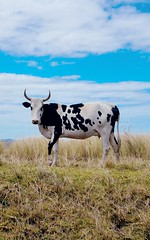 Three young boys, no older than four years of age, met us quite by accident where we parked our tiny vehicle. Practising the few phrases of Xhosa we knew, they responded with a flourish of words we couldn’t understand but smiles and laughter concealed the language barrier.

Two of them wanted to carry our bags, heavier than they were. This was our first taste of the friendliness of the Nqileni people, the village based between the Xhora and Bulungula Rivers.

ON CAMERAS AND MAKESHIFT RUNWAYS

The 80km drive from Coffee Bay had taken us three hours and had left us ravenous. After checking in and whisking our luggage into our traditional mud hut, we made our way to the kitchen for chicken mayo sandwiches toasted on traditional Xhosa bread. One slice is quite possibly equivalent to a quarter of a loaf at home and I began to wonder, with a smile, if this delicacy was not perhaps the reason behind the voluptuous frames of so many Xhosa women. 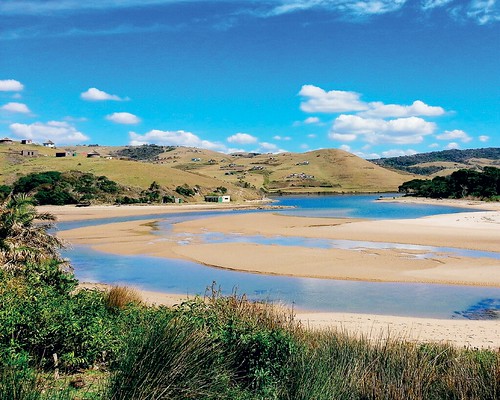 After lunch we sat on the green slopes overlooking the river mouth and relaxed with not a soul in sight. To the left were an abundant community of homes, crops and livestock, to the right an unspoilt stretch of coast. Bizarrely, three light aircraft appeared out of nowhere and flew low over the ground just metres from where we were. 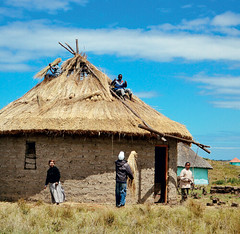 Eventually I gave in and made my way to the water’s edge, my toes feeling the bite of the cool water first. I lay on my back and floated as far as I could into the mouth. By the time I returned, a group of girls from the village were huddled around Lauren. She looked up at me from the game of Scrabble, which she had been sharing with them, and directed me with her eyes to look at a group of older girls who had got hold of the camera. They were instantly transformed into runway models, posing with sunglasses and cellphones. Some other young villagers had started playing bongo drums with a youthful blend of energy and skill.

That evening, the sunset seemed to paint the sky with orange shades of smudgy pastels. As the fiery orb completed its descent out of sight, it cast the hilltops into a stark silhouette. On them, we made out the cylindrical huts, a pair of horses and a woman carrying a basket on her head.

There is no electricity at Bulungula Lodge other than the solar-powered system to run the essentials. Between bouts of conversation around the campfire, I looked up towards the sky in search of shooting stars. Rumour has it that if you don’t see one within 30 minutes here, you get an extra night free. 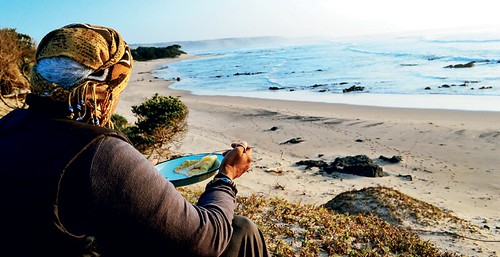 The days that followed were some of the most relaxing I’ve experienced, exploring the deserted coastline with its pure white sand (thrown into contrast by the green hills and grazing cows alongside it). We were led on foot through the village down to the Xhora River, spending a day paddling canoes. Along the steep rocky banks we encountered goats that had somehow made their way down the cliffs to the river’s edge. Further down, we found youths fishing for a bite to eat and, on the way back, we stopped for lunch at Ilanga Fire Restaurant, a community-run business that serves pancakes made on paraffin stoves.

Our time here was undoubtedly too short (is it ever long enough?). Yet, as we packed our bags, said our goodbyes and made our way back to our car, this time without the help of our young friends, our souls were moved, stirred and possibly changed forever. 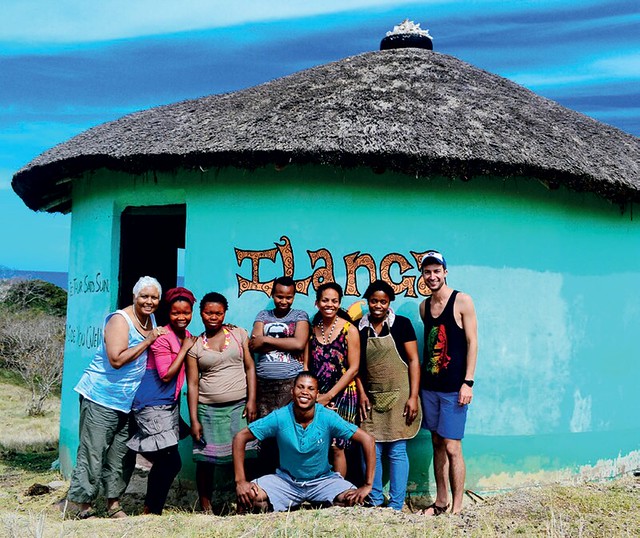 playing the bongos with the local kids.