There is something quite surreal about watching a soccer game in a passionate nation that eats, sleep, breathes and skips work for soccer.  I’ve realised that you have not really experienced a soccer game until you’ve witnessed a match at La Bombonera stadium in Buenos Aires.  It was opened in 1940 and was originally named Estadio Camilo Cichero, after club president, Camilo Cichero.  When visiting this electric city in Argentina, I first got to see the stadium on a tour of the district La Boca.  My tour guide Emiliano warned us not to walk around here at night as this was a poorer neighbourhood (by Argentinean standards) and you could get mugged.  Hailing from South Africa, I looked around at the peaceful streets with its colourful houses and wasn’t convinced.

Archie’s place was the backpackers I called home and when one of our Mexican roommates organised tickets to a Boca Junior game, my cousin and I excitedly got our game faces on and boarded the bus with the boys.  We waited in the long queue with Benoit the Belgian, Ivan the Mexican, Swiss Eric and a Chilean who spoke no English.  Even from outside we could hear the crowd roaring in anticipation. The stadium is widely known as La Bombonera meaning ‘the chocolate box’ due to its unusual shape of a flat side and three steep stands around the rest of the stadium.  It is home to the famous Boca Juniors soccer club. Most locals either supported Boca Juniors or rivals River Plate.  Boca Juniors is said to be the most successful soccer team in Argentina and one of the most successful worldwide having won 51 National and International titles.  Inside the stadium, you’ll find the Museo de la Pasión Boquense (Passion of Boca Juniors Museum) within the stadium which has a Hall of Fame and a mural of legendary player, Diego Maradona.

For only 30 Argentine pesos, we were about to watch a game between Club Atletico Boca Juniors and Universidad Catolica.  Once we arrived, we were forced to sit on the Chilean side as the Boca side was filled to the brim.  We felt left out as the Argentine fans in their blue and yellow beat their drums and sang at the top of their lungs without ceasing.  We sat rather silently on the empty side, hoping we wouldn’t be pummelled if we cheered for Boca Juniors.

I didn’t know this when I got there, but due to the stadium’s unique shape, the acoustics are tremendous and the boisterous Boca support has been dubbed ‘La Doce’ meaning the 12th man.  The Chocolate Box is also known to vibrate as its fans begin to jump, which I felt as the game commenced.  There was a solid beat that made the stadium pulsate in a rhythm with the supporters.  The game started out slowly, but the fans were relentless in their cheering.  We danced around, ate old burgers by mistake and were forced to use a nasty long drop.

In the end, it was a tie with both teams scoring two goals. We got our 2 minutes of fame from a local TV station that filmed us foreigners taking all the action in.  After exhausting ourselves with cheering, we soon got cold seated on the concrete steps one the sun had gone down and left a pink sky behind.  I was elated to have spent my final night in Buenos Aires here and experience the sheer exhilaration of Argentine’s showing love for their soccer teams. 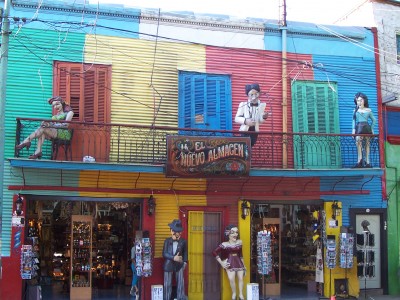 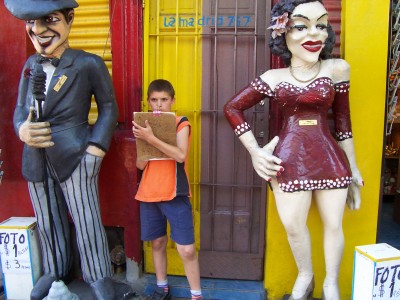 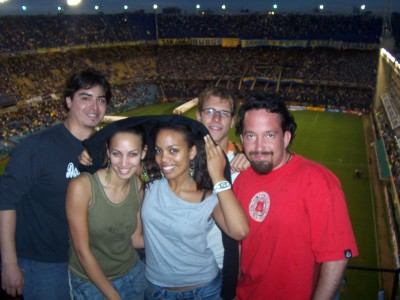 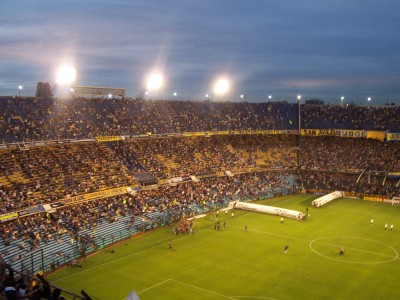 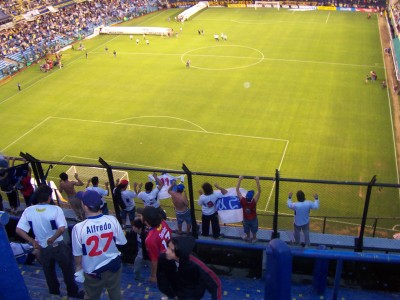 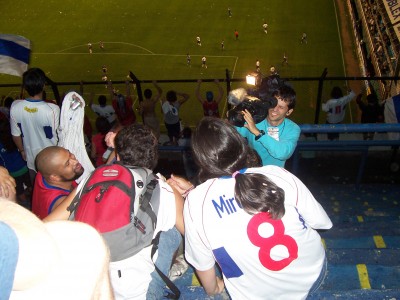 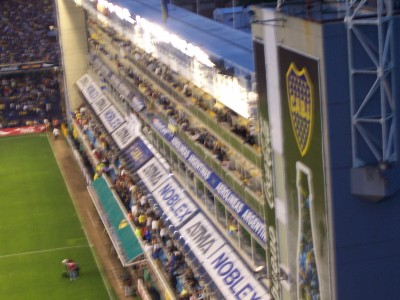 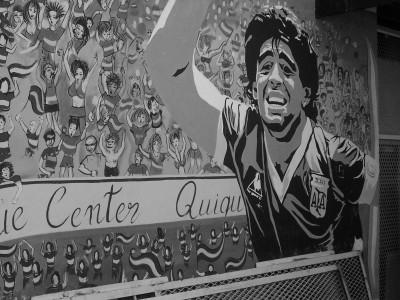 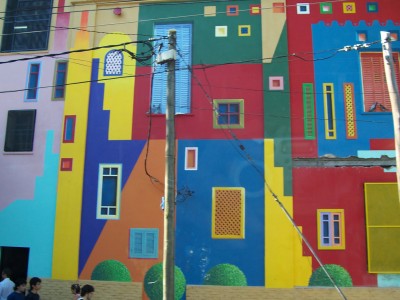 All photographs in this post were taken by myself and Kirsten Murphy.