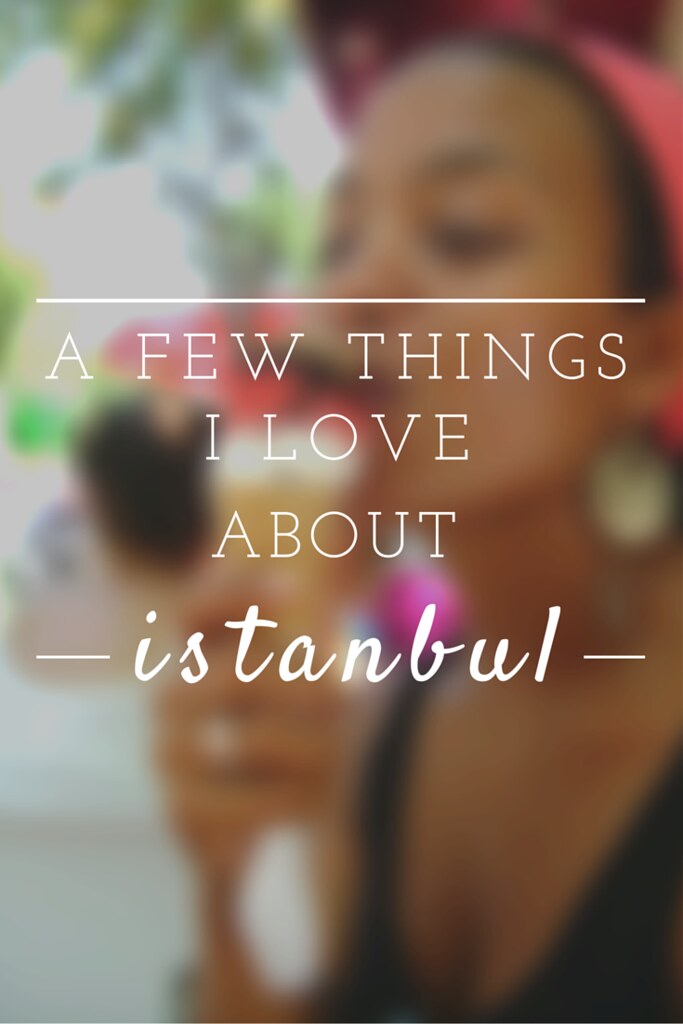 Istanbul is a city that is neither Asian nor European, but stands alone as a unqiue city claiming its very own culture, cuisine and rich history.  Istanbul is truly a city I would return to in order to revisit its markets and islands and taste its ice-cream and apple tea.  Here are a few of my favoutite things.

– Istanbul is the perfect fusion of Europe and Asia. 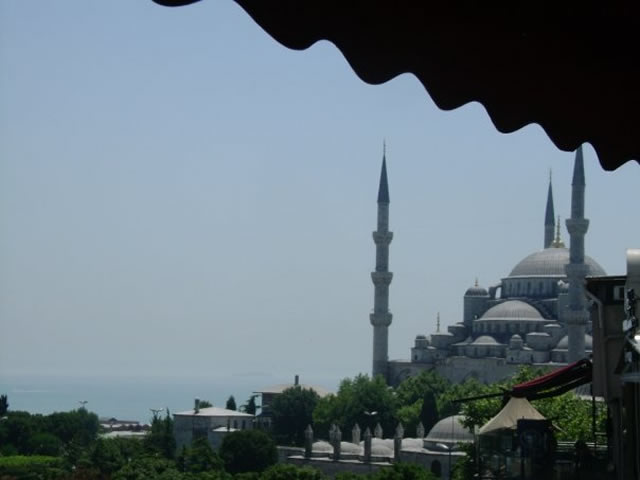 Istanbul is bi-continental in that one part of the city lies in Asia and the other in Europe.  One third of the city’s population reside in the Asian part whilst the historical and commercial hubs lie on the opposite European side of the Bosphorus.  Due to the number of significant empires who called this home, it’s impossible to pinpoint the culture of the city and its people.

Many a time, I felt like I was in the Middle East, due to the past Ottoman influences and abundance of impressive mosques scattered around the city.  But walking through the famous Beyoglu district amongst the patisseries, cafes art galleries and Art Nouveau buildings I was transported to Europe. Ancient red trams still make their way amidst the streets, offices and shops.

– The lavish architecture of fallen empires.

If there is ever city whose architecture will leave you spellbound, it’s that of Istanbul.  Byzantine and Ottoman rule left the greatest mark on the city and what a picturesque one it is.  There are traces of Greek and Roman influence too in the Hippodrome of Constantinople and the Column of Constantine, but I hardly noticed these beside the elaborate churches which were converted to mosques and some to museums.

The Majestic Hagia Sophia was built in the 6th century and followed this succession after being the largest cathedral in the world.  The Blue mosque (Sultan Ahmed Mosque) rings true to its name with delightfully adorned interior walls with blue tiles.  Upon entering, you’ll have to cover your head and body and be mindful of those in prayer. The Topkapi Palace was the home of Ottoman sultans for 400 years and has the most tranquil gardens.

– The Royal Island of Buyukada.

Buyukada means ‘Big Island’ in Turkish and ‘Prince’ in Greek and is the largest of the Princes’ Islands in the Sea of Marmara.  This was an island where exiled kings and royalty spent their days.  It has an age old charm about it.  Locals take tourists around in elaborate horse carriages, wooden houses stand tall having been there for years and the town square’s flags fly brightly in the midday sun.

I take a moment to sit beneath a yellow umbrella and lick my ice cream.  Turkish women lift up their black burkas to put their feet in the sea and children cool down in the water off the rocks.  Waiters beckon us from the seafood restaurants beside the shore.  I find a stairway leading all the way up between white, wooden houses.  On higher ground, I can get peaks of luscious gardens through the gates and Istanbul across the sea.

– It resembles the set of Aladdin.

I’m convinced that if Jasmin and Aladdin were real, they would reside in Istanbul.  Whenever I turned a corner there would be a sultan’s palace, a city market or sometimes a giant lamp of sorts.  Outside the Hagia Sophia, vendors displayed their colourful wares of hats that would make Aladdin and the Sultan proud.

– Exploring the city via Bosphorus ferries.

The Bosphorus straight separates the Sea of Marmara and the Black Sea and provides unique angles from which to view the city.  Once the waiting is over and you’ve found your seat on an outside bench, put your feet up and watch the cityscapes pass you by.  Even from the water, the palaces and mosques tower above everything else and the sun gently sheds light on the gentle waves. 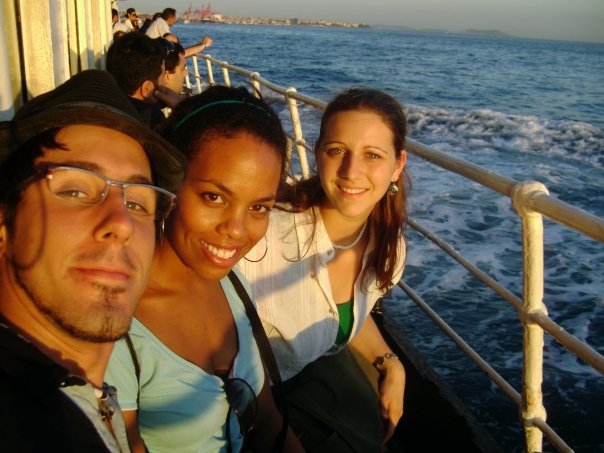 Sunset on a Bosphorus ferry. 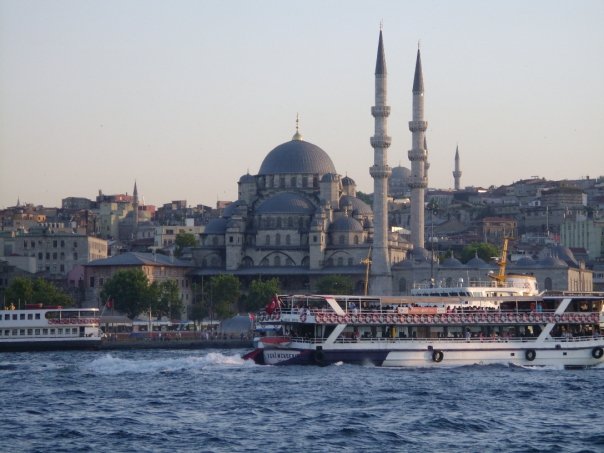 City views on a ferry in Instanbul.

This old market is one of the largest covered markets in the world.  This is a market you need to set time and money aside for.  I went there broke.  Not my finest moment.  As I made way through alleys of lanterns, jewellery, instruments and belly-dancing belts, I kicked myself for not bringing money.  The rings alone could have occupied all my time as I fitted on one ornamented ring after the next. 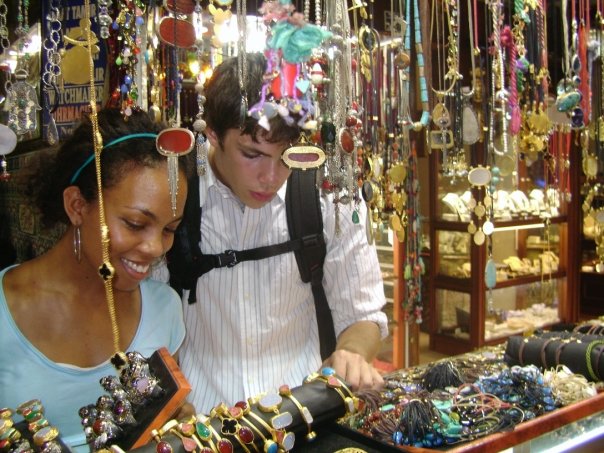 Jewellery at the Grand Bazaar.

I would return to this land just for its heavenly tea.  It is also known as Elma Cay and is treasured throughout the country by the locals.  Ingredients are said to be found along the Black Sea coastline.  And if you’re attempting to make it, I’ve heard it’s a case of simply adding apple flavouring and spices to good quality black tea, but I could be wrong.

Often this tea is the first thing served upon being seated at a restaurant.  A wonderful pastime of many rug store owners is to invite you into the store, serve you apple tea and start conversations on Turkish rugs and beyond.  I had no interest in buying a rug, but I often stayed for the tea. 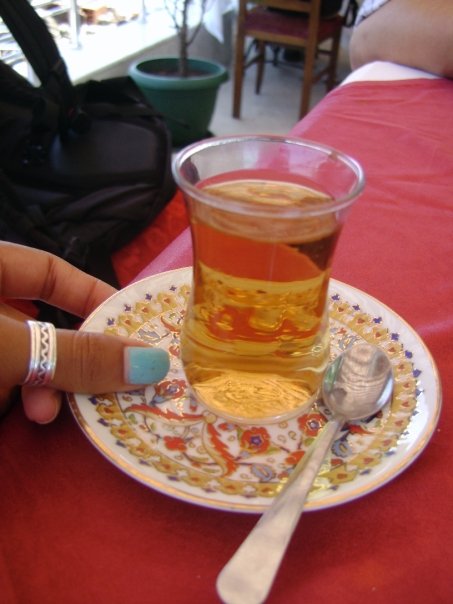 If you like ice-cream then Dondurma (Turkish ice-cream) may blow your mind.  I must admit that I consumed ice-cream nearly each day I was in Istanbul, for three weeks.  It is truly like no other ice-cream.  It doesn’t have the usual texture, takes some time to melt and tastes a lot chewier.  These unique properties are made possible by two ingredients: salep, flour made from the root of the Early Purple Orchid and a resin called mastic.

Not all vendors in Istanbul have this particular ice-cream originating in Kahramanmara?, but all variations are delicious.  Many a time, the vendor will add a mini-performance to the sale.  So you’ll get way more than just ice-cream.

Turkish ice-cream will change your life.

Have you ever been to Istanbul? What was your most favourite part? Any bad experiences? Please leave a comment because we’d love to know!

If you would like to gain a deeper knowledge of Istanbul, Serhat Engul is private tour guide in Istanbul who offers comprehensive history tours through the city. To get in touch with him, head over to his Istanbul Clues travel blog.