You are here: Home / Travel / Africa / A few of my favourite things at the Getaway Show, Cape Town.
71
SHARES
FacebookTwitterStumbleuponBufferPinterestPocketGoogleWhatsapp
Mail 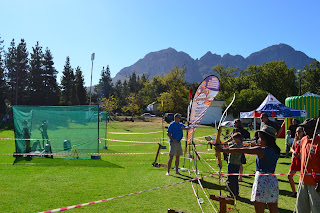 I missed Sunday lunch with the family, hopped in the car and put foot all the way to Lourensford estate in Somerset West just to experience the Getaway Show.  Being mid afternoon on the final day, I missed long queues, parking problems and crazy crowds and got prime parking  near the entrance in the shade of the trees as well as a free ‘getaway blogger’ ticket.These are just a few of my favourite things at this massive outdoor event. 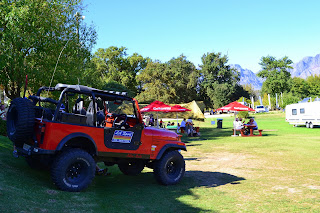 –The Venue
Lourensford wine estate is exquisite and peaceful even amidst many people.  I could sit on the lawn munching chilli biltong with the mountain sprawled out in front of me.  As you drive through the entrance, you pass rows upon rows of vineyards with red and white rose bushes marking their beginnings and tiny stream between large trees and shrubs.  Families picnicked alongside it and enjoyed the coolness of the shade.

– Archery
For only R10 I was able to wield a bow and arrow and flex my archery skills.  The instructor showed me the way forward and when I felt prepared I released the arrow.  For those two attempts, I imagined I was Robin Hood and actually came pretty close to the bulls eye. 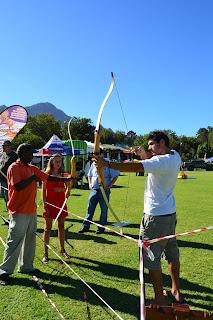 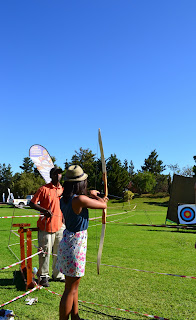 – The all-in-one Isuzu Camping bakkie.
Aside from a caravan or mobile home this bakkie had it all.  A built-in tent  to sleep in on the top, where the canopy should be with everything else your heart may desire whilst camping or on the road.  Your kitchen utensils had their place on one side and the outdoor tools the other.  There is even a place to cook.  An ideal vehicle to hit the road with. For about R400 000 this mobile roadtripper could be yours.

– Paddle boards
The first and only time I got on a stand-up paddle board was in Hawaii.  But more and more I see South Africans using them in flat water. Kraalbaai, Betty’s Bay and Muizenberg beach are some of the spots.  They resemble a chubby versions of surfboards with more foam and width and once you have your balance you can stand up and row for ages.  Unless of course you’re trying to catch waves with them.

-Slush puppies
In the heat of the day in wineland territory there is nothing that cools you down as much as fruity ice in a cup.  The queue was by far the longest at this stand and there’s no guessing why.  When the grape flavour refused to stand frozen, I had to opt for strawberry instead.

-HD TV
The DSTV stand had avatar playing on HD.  Now I’ve seen it in 2D and 3D and neither came even close to matching this visually.  It was almost a complete different movie.  The brightness of the war colours painted on their faces, the vividness of bright creatures they fly on and the realness of the soldiers running through the jungle past me.  Well at least it seemed as though they were.

-Liquid Grace Adventures
I saw a wake surfboard for the first time at this stand.   A cross between a skim board and wakeboard. They offer adventure camps between the garden route that can include kitesurf lessons, canoeing, mountain biking, tubing, zipline, abseiling and bungee-jumping.  All about the adrenalin, adventure and action.

-Photography Safari
One photographic stand advertised a photographic safari whereby you get to float along a river alongside other photographers with a lens the length of my femur.  The photographs captured with this equipment of hippos, birds in flight and other wild animals in their natural habitat make this seem like something I have to do someday.