I’m sure you’ve heard of Zagreb, Hvar, Dubrovnik, and the Plitvice lakes… You should have – these are probably the most popular tourist destinations in Croatia. But there are also plenty of other places worth visiting, ones that are equally beautiful, but aren’t swarming with tourists.

It’s time you hear about Lumbarda, Primošten, Rastoke and some other stunning places this seaside country is hiding from us all. And you are just in time for an off-season vacation, when the beaches are almost empty, luxury villas, such as the ones from Croatia Luxury Rent, are welcoming, and you can really enjoy some peace and quiet!

Ready to discover the lesser-known Croatia? 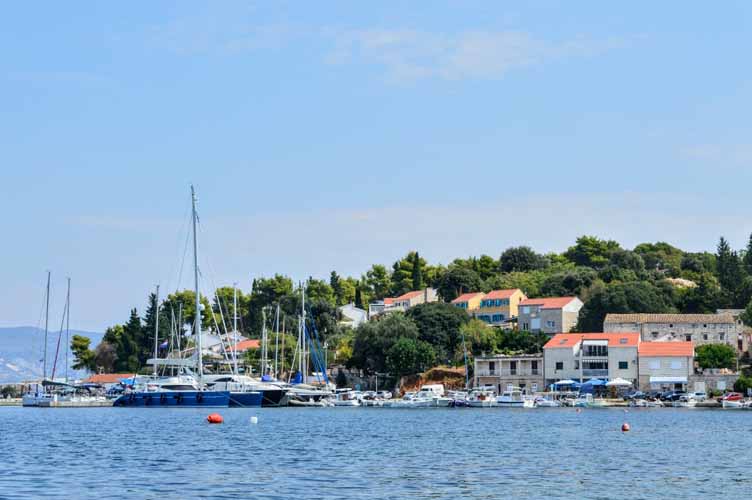 Everyone knows Kor?ula Town, the popular historical town on the Kor?ula Island. But not everyone has heard of Lumbarda, which is only 10 minutes away (by car) from the famous old town.

Kor?ula Island is a paradise because of its stunning sand beaches and crystal clear sea. But the actual town is way too crowded for anyone looking for a peaceful vacation. There are seas of tourists in every one of those narrow cobblestone alleys, and the overpriced restaurants and bars are so crowded that it’s often impossible to relax and enjoy your meal.

That is where Lumbarda comes to the rescue! A mere 5 kilometers away from the birthplace of Marco Polo, you’ll find Lumbarda – truly a paradise on Earth.

Even though the place appears to be quite small when you first arrive, it is actually not. There are dozens of different beaches to choose from: sand beaches, pebble beaches, stone beaches and even concrete beaches. So, something for everyone.

The only time when you’ll actually realize just how many people there are in this place is on a Friday evening, when the locals gather in the main square and grill fish. They do this every Friday, and it’s called Fisherman’s night. If you enjoy fish and Mediterranean cuisine in general, you definitely don’t want to miss genuine gathering.

Trpanj is one of the larger port towns on the Pelješac peninsula. But if you haven’t heard of it yet, it’s high time you checked it out.

If you’re travelling with a group of friends, this is definitely the place to be – especially if you’re looking for a little privacy on the beach. The great thing about Trpanj is that it has so many different beaches that it’s always easy to find a secluded or empty one, even in peak season. On the other hand, if you’re travelling with your family or small child, you can also find a few pebble/sand beaches that are perfectly safe and child-friendly.

Trpanj’s walkway by the sea is something you also need to spend some time on. It is above than the center of the town and offers simply stunning views at sunset  Not only is this place surrounded by beaches, there are lots of forests and walking trails, including several hidden paths that are worth exploring.

One leads to a disco, the “place to be seen” in Trpanj if you want to dance the night way. Another one will lead you to a bay with healing mud, while a third one will take you to the church and back to the center. This is also one of those towns that wins you over the more time you spend here. 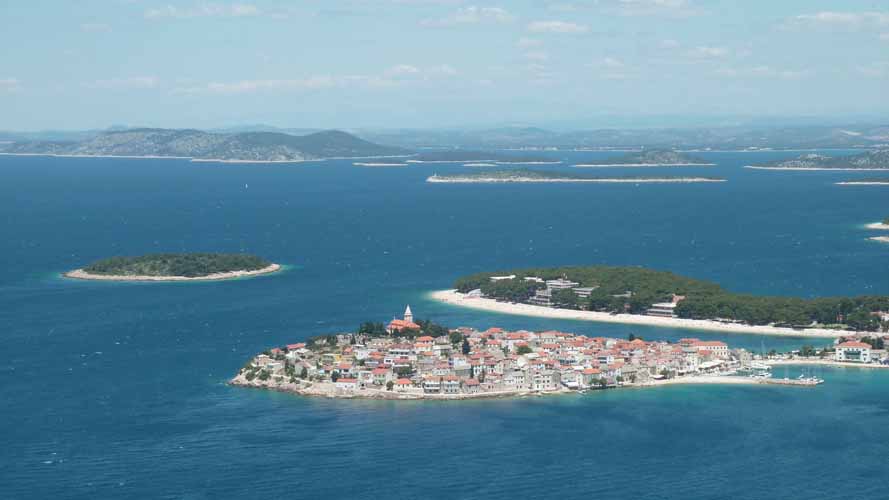 Primošten is mostly famous for its extensive vineyards. In fact, they are so important that they are currently being considered as a UNESCO World Heritage sight. And that alone is reason enough to visit this lovely little port town.

Centuries ago, Primošten Old Town was connected to mainland Croatia by a bridge. This was later replaced by land, which is how the town went from being an island to a peninsula that it is today. The connecting land is also how it got its name – after the verb to bridge (premostiti).

Probably the most stunning part of the place is the promenade surrounded by old town walls. However,  you should also visit the town’s historic sites, such as the St. Juraj and St. Roko churches, which were both built centuries ago.

The old town is only a small part of this place – the entire area is actually quite large, and  has so much to offer.

Want to party all night? Go to the Aurora nightclub. Interested in an adventure dive? Head to the Pongo Diving Center. Looking for a taste of authentic Mediterranean cuisine? Book a table at one of the many different taverns in this beautiful town – your taste buds will thank you for visting. 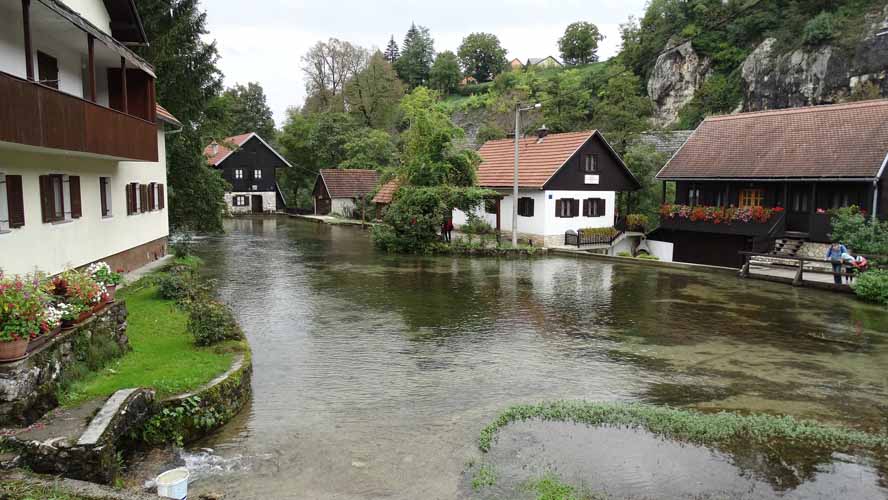 Rastoke is the historic center of the Slunj area in Croatia, about 100 km from Zagreb. And if you’re familiar with the stunning Plitvice Lakes then you are going to love Rastoke!

Rastoke is actually connected to the Plitvice Lakes via the Korana river, and the area is sometimes dubbed the “small Lakes of Plitvice”. That’s because a similar natural phenomenon happens here – the river Slunj?ica flows into the Korana river, forming some stunning waterfalls and cascades. And at the point where the Slunj?ica river enters the Korana river, there is a travertine barrier, formed by  a large lime deposit – something you really need to see with your own eyes.

It is also very interesting to see the water powered mills here, the first of which dates back to the 17th century. And most waterfalls were named by mill owners, the most popular of which are Hrvoje, Buk and Vilina kosa. In addition to that, if you do visit Rastoke, you’ll get the rare chance to spot an otter in Croatia, a creature you certainly will not get to see around the beaches of Dubrovnik or Hvar. 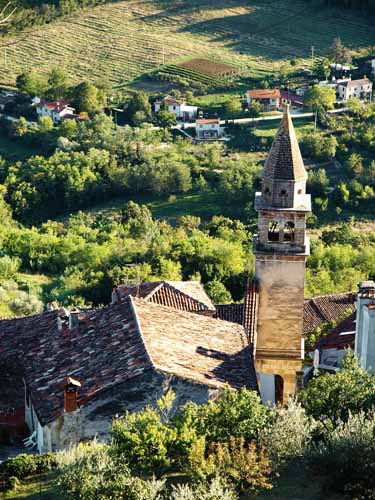 You may have heard of the Istrian peninsula, where Motovun is located. This small town is frequently overshadowed by some other, more popular tourist destinations in the area, such as Pula, Rovinj, Pore? and Umag.

This small town is the home of the Motovun Film Festival, which is held in July every year. It attracts people and stars from the entire region, but it is still a small festival, especially when you compare it with the Cannes film festival, or even the neighbouring one in Sarajevo.

There is still so much more to do and see in this tranquil little town. How does hunting truffles sound? Motovun is one of the rare places you can actually give this a try.

There are also plenty of hiking trails in the area, which will take you through forests and meadows giving you great views of the region

There are also a few biking trails worth checking out, as well as a paragliding center that will give you the time of your life.

Žabnik is in one of the northernmost areas in Croatia, Me?imurje. And if you’re a fan of hiking or biking, then you definitely should put this town on your list. With tons of trails surrounded by untouched nature, this is an oasis for the adrenaline-seeking adventurer.

Here you will also find an area that is encircled by the river Mura, and is also the home to one of the most famous trails in Žabnik – Mlinarov pou?ni put. The trail is about 6 kilometers long, with 12 marked stops along the way. You can both hike or bike across it – whatever you prefer.

And after you’ve done hiking or biking, you can go rafting on the river Mura, or grab yourself a jet-ski. However,  if you’re more into relaxation than adrenaline rushes, then you’ll be happy to know that the entire Me?imurje area is also renowned for its wellness centers. In fact, it is often referred to as  “the Croatian wellness oasis”. So, if you want to relax and unwind, it’s the perfect spot to be!

Also in the Me?imurje area, this tiny town is a place you likely never heard of. It’s far away from all the seaside tourist spots, but also from most urban areas. However, it is the home of something truly unique in Croatia.

Badli?an is known as the labyrinth town, because it is home to 9 labyrinths. Yes nine! perhaps because the first ever labyrinth in Croatia was created there! They are built from stone taken from a nearby quarry, and at first glance you barely notice them – it looks as if though someone randomly arranged some stones on the forest ground. But when you look at how the stones were arranged, you can notice a definite pattern.

Each of the labyrinths represents one of the planets in the solar system. And, each of them is also meant to improve certain segments of your life, once you find your path through it of course. There are labyrinths for love, happiness, mind, body, power, energy, feelings, wisdom, creativity, connection, freedom, change, life and death. People who have actually walked through them swear by their healing powers, so you should definitely give them a shot – you’ve got nothing to lose, right?.

Sure, you could go where everyone else goes in Croatia, but why not throw the guidebook to the wind and discover some of the lesser-known regions. Not only will you come away more relaxed, you will have experienced the true nature of the country too!