This island in the South of Thailand, only a one hour ferry ride from Koh Phi Phi surprises and silently steals the show from it’s better known neighbour. While Phi Phi becomes more and more like a drunk, backpacker’s dream, Koh Lanta is an island where you can escape the bring clusters of tourists and the prices that go along with it whilst living alongside the relaxed Lanta locals. Tuk tuks, bamboo, palm trees, mangroves and beaches; there’s just about everything you’ll need for an unforgettable island stay.

1.Bamboo Bay
This is one beach on an inhabited Thai island where you can find semi-seclusion. Once you make your way down the gravel hill, through the long palm trees, you’ll only find about three beach bars and resorts in the cove. There is on set of ladies offering Thai massages at standard island price of 300 baht, but once you make your way to the end of the beach, you become totally separated from everyone else. Not a soul in sight. Maybe a dog, a crab and an eagle overheard, but otherwise a pretty remote beach. It’s rocky, so be careful when going for a swim. When you’re swimming and you look back on the land, you’ll get an eyeful of the heavily laden green land, hills and forest. Maybe even the lightening cutting into the horizon. 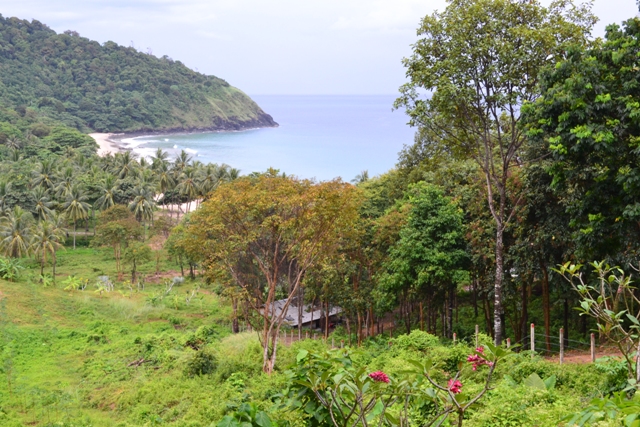 A reminder of what life was once like for many locals living along the coast, the bars, houses and restaurants jut out into the East Coast waters and balance on stilts. Ton Gell is the name of the tree at the entrance of this restaurant owned by a wonderful British man who moved here two years ago. As well as great conversation about the simple life in Thailand and particular area, they make a superb, spicy green chicken curry for 100 baht. We grabbed a table outside above the water and the only thing that gave the time away was the tide bringing the water ever higher. 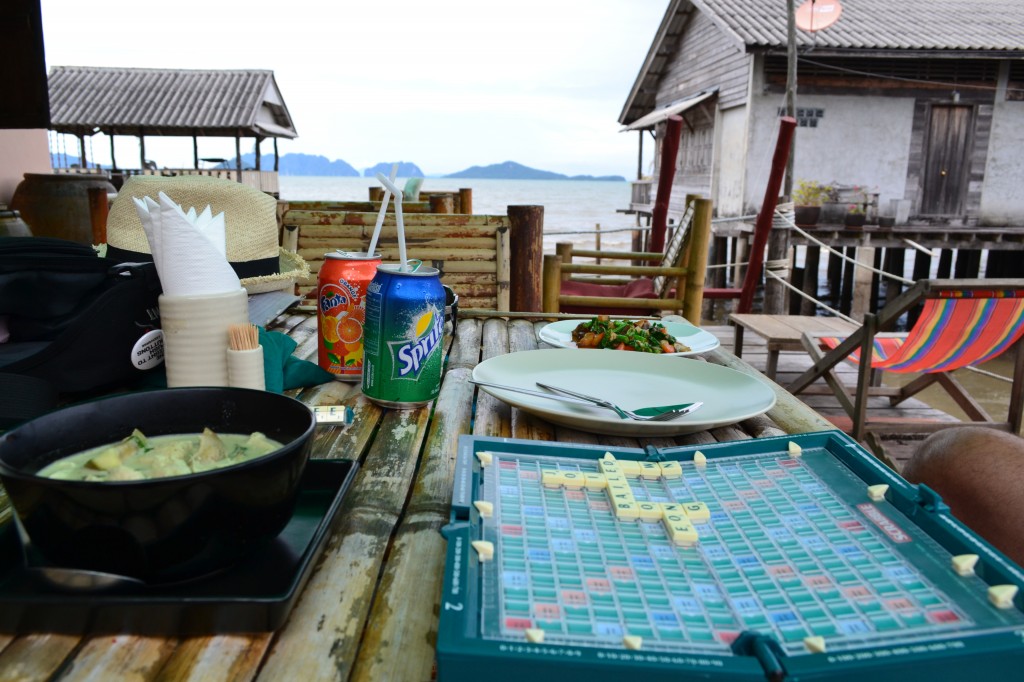 This was one of the best beaches to swim at. There were only a few rocks you have to get passed before its clear ocean. There are no cement bits in the water as found on Khlong Nin’s seemingly perfect beach. Go figure that the really expensive resorts would try hoard this bit of coastline for themselves. We weren’t meant to use any of the loungers or umbrellas but occasionally when hotel staff walked past, they didn’t seem to mind and we found some ice water left at our umbrella after a swim. They didn’t mind us making use of their waterfall shower just off the beach either. I spotted the price of a seafood buffet on the board as I went for a shower. At 2000 baht I wished I hadn’t. We were yet to pay even 200 baht for a meal on the island. 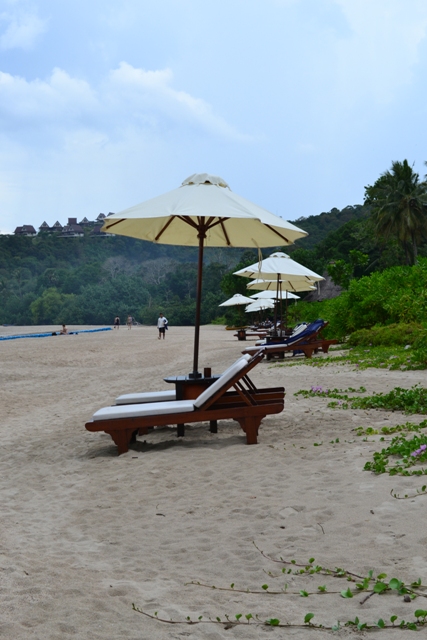 4.The unassuming Lanta lifestyle and charm.

The beauty of lanta lies in the way it doesn’t scream about its beaches and beauty, it goes about its business and still manages to persuade you to stay longer or never leave. The majority of the population on the island is Muslim and all about you’ll see young boys in their white robes and fez’s and girls with their scarves on scooters, walking from school or helping their parents in the evening. In the evening, the call to prayer resounds from the mosque out through the forest all the way down to the edge of waters. Everyone goes about their daily life uninterrupted or phased by the island’s visitors tanning on its beaches and visiting its bars. It was the first place in Thailand where we truly began to relax. 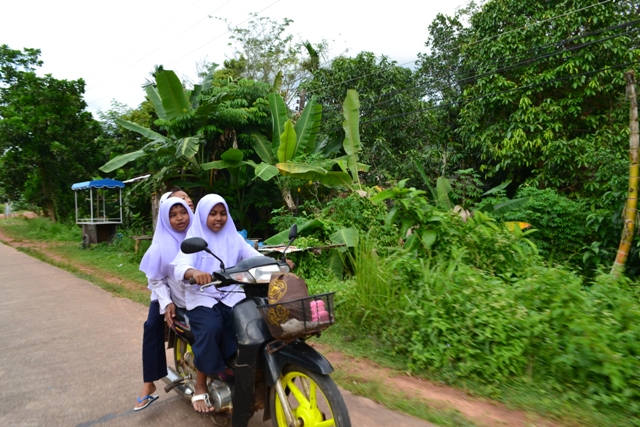 5.Little pockets of Europe on the island.

Only after we discovered a Swedish bar in the busier section of Khlong Nin, were we told that Koh Lanta is known as the Swedish island. Roundhouse serves up a spectacular homemade beef burger and tasty Thai chicken and basically drew all Swedish visitors to its doorstep right on the beach. Saturday nights saw a Thai band playing great rock tunes and entertaining the tanned blonde-haired people well into the night. 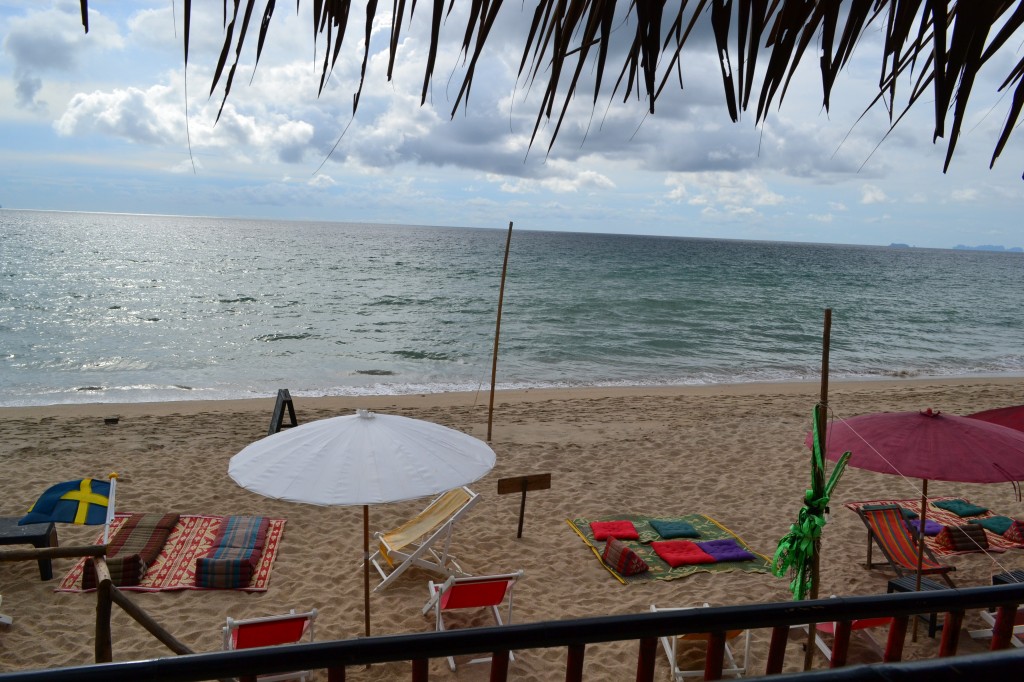 Just across the road from Roundhouse is what I like to call Little France. One of the friendliest owners greeted us with a “Bonsoir”. It was as if we had left Thailand for a bit and taken a peek into Europe. Vintage pictures covered the bamboo walls, music from another time played from the speakers and we chatted to the owner about espresso, his life split between France and Thailand. I’ve had coffee at a few places and would dare to say that this is the best cappuccino you’ll find on the island.

6.The friendly, peaceful people of Lanta

It is a place where people truly smile, not because they’re pestering you to take their taxi or wanting to sell you a tour, but because they want to. Girls on scooters, fisherman getting the last catch of the day from the pier, Rasta barmen, mothers making food whilst their toddlers play at their feet all smiled so easily and welcomed us so readily into their space. Even the dogs never bark here, only lay right beside the warm roads. In typical island fashion, everyone is relaxed and in no hurry to get anywhere or force you to use their service. Even the tuk tuk drivers have hammocks in their sidecars as they wait for passengers. Everyone’s homes serve as their business too and all massage parlours, restaurants and repair places run from the front whilst the toddlers and children play around whilst the parents work. You can stop off at any little food spot along the path and you will only encounter hospitality. 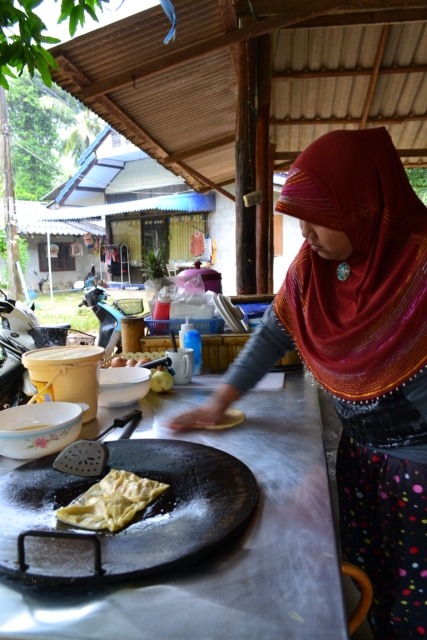 7.The way a scooter can take you around the entire island.

For only 200 baht a day we could drive in any direction and explore the island to the very ends of its land. We could go from the lush, green inland areas where rubber was collected from rows of trees to the houses on stilts in the East and all the way back to the beaches of the South East where the sun says its final goodbyes. You’ll drive past a baby elephant along the winding path and be able to drive all the way until the end of the pier. I can’t imagine a better way to see everything on this island. A tuk tuk or mini bus would be so limiting and expensive. Gasoline for tourists is about 50 Baht a litre and 100 baht of gasoline will pretty much keep you on the roads for an entire day. Watch out for the potholes, the roads are not the best but have the best views by far. 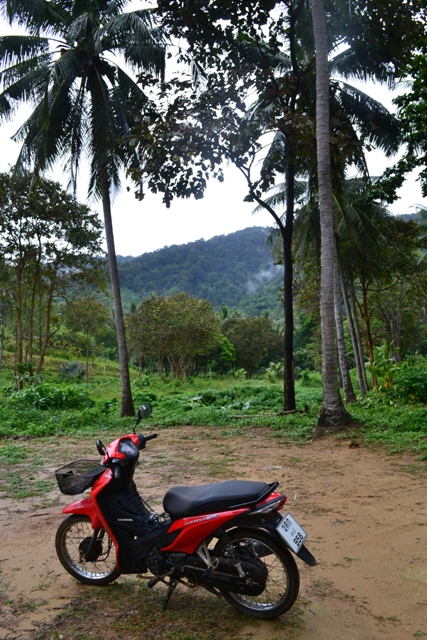 8.Bungalows on the beach

Whilst the price range of resorts throughout the island will differ hugely, they tend to favour the bungalow style of living. There is less building up and more utilisation of space in little Thai style pockets mostly close to the beach. Our bungalows of Khum Lanta Resort was one resort back from the beach but was beautifully constructed with air-con, wooden blinds and ample space, a kitchen and balcony for lengthy breakfasts in the heat. There is not hotel stairs, check-in is a very relaxed process and you have your own space separate from everyone else. 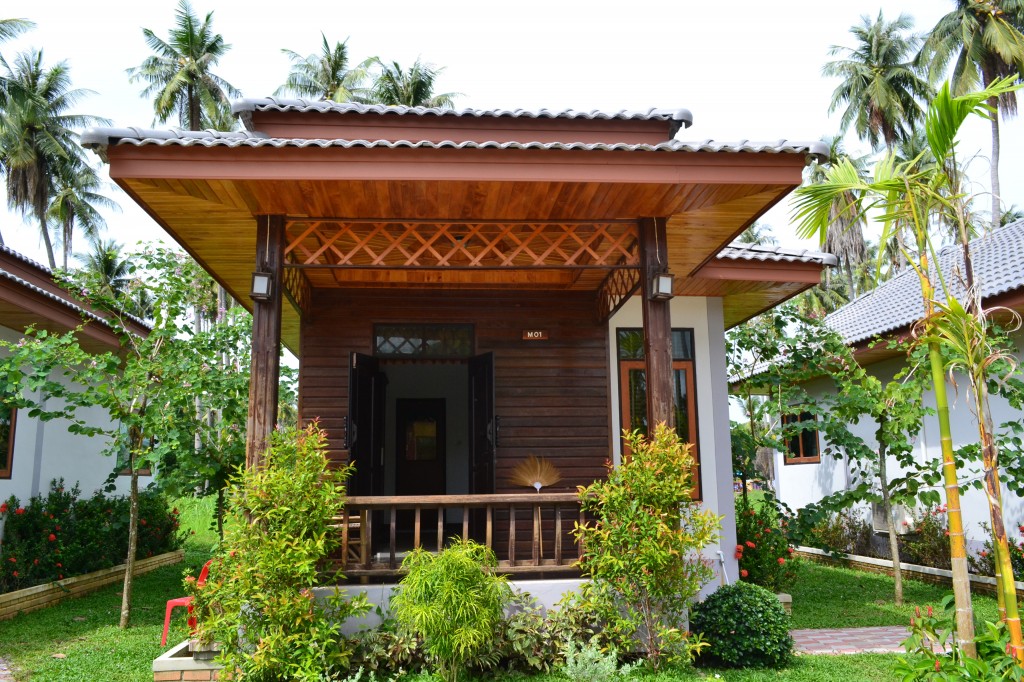 9.It is not overrun with Tourists.

Unlike its more glamourous neighbour, Phi Phi, there are beaches, towns and roads you can visit where you will not find another tourist. Of course tourists can be seen throughout the island in side-street restaurants and beach bars but you’ll see very few at a time. As a result of this, you can still find non-tourist prices in some restaurants and not be ripped off whenever you attempt to purchase anything. 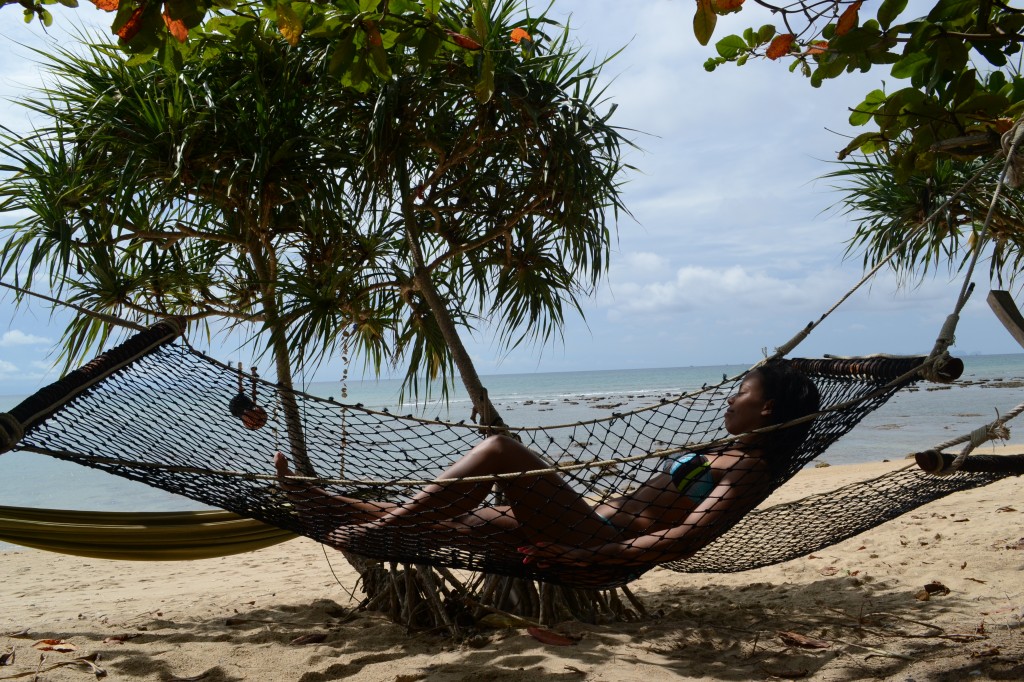 Sure sunsets are worth looking at wherever you may find yourself in the world, but here you want to chase the sun on your scooter until you spot it hovering in between the trees of the jungle. You’ll see the light throw a soft hue of the houses in the forest and the cows chewing grass beside the mangroves. You can catch a glimpse of it fading away amidst the heavy rain clouds and you’ll ride from a pier of the island where the sun last left its mark all the way to the other end where its last seen from the highest points of the island and showing off for the visitors enjoying en early dinner. You want to get closer to the sun as it does a dying dance on the waves of the warm ocean, so you run into the water for a final dip of the day and float on your back and remind yourself to always remember when the sky looked like this. 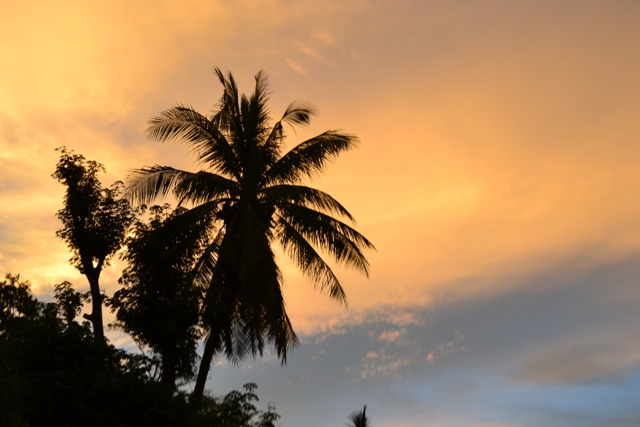