You are here: Home / Travel / Asia / 10 Reasons you have to visit Borneo.
1.5k
SHARES
FacebookTwitterStumbleuponBufferPinterestPocketGoogleWhatsapp
Mail

For me,Borneo has always conjured up all kinds of wild and mysterious imaginings-Fascinating wildlife living in the deep rainforests, native tribes with intriguing old habits and truly spectacular natural beauty. Turns out my imagination and David Attenborough Borneo specials painted a pretty accurate picture, but there is a lot more to Borneo than most people know about it. Our 8 days of river cruising and jungle meandering was a truly eye-opening journey and here’s why I think everyone should visit Borneo at least once in a lifetime.

1. The Wildlife endemic to Borneo.

There is a reason Wildlife experts, film makers and conservationists travel all the way to investigate the unexplored rainforests of Borneo. Both states of Sarawak and Sabah boast some of the world’s most fascinating wildlife, found here only. Seeing Pygmy elephants beside the river, Proboscis monkeys with their long noses and big bellies high up in the trees and Orang Utans (jungle people) in their natural habitat was mind-blowing. As the days drew to a close we saw crocodiles, Rhinoceros Hornbills and Longtail Macaques going about their day in the humid jungle.

The best place to spot wildlife in the rainforest, is to stay along the Kinabatangan River in Sabah (longest river in Borneo) as each lodge and backpackers offer river cruises in the morning, afternoon and night time with a guide. 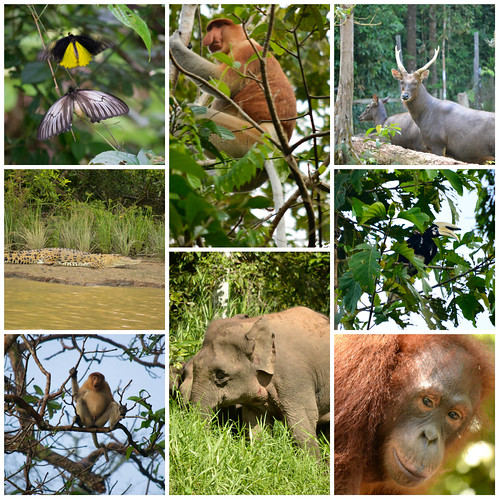 To see animals that have been rescued from hunters or families holding them illegally as pets visit the Matang Wildlife Centre in Sarawak or the Sepilok Rehabilitation Centre in Sabah. Due to some animals, especially Orang Utans, being captured and kept illegally as pets for so long, many are not able to be released and will sadly spend their lives in enclosures.

At the Matang Wildlife Centre in Kubah National Park, we were able to watch two young Orang Utans, Buyee (1 years old) and Dr. Kok ( 5 years old) undergoing their primary school training in the forest. I have seen lion cubs, young rhino babies, tiny zebras and giraffe but there is nothing more adorable than a baby Orang Utan. Sharing 96.4 percent of our DNA, it’s no surprise these little guys appeared so human and very much like mischievous toddlers.

Visitors are not allowed to touch them as the park believes that in order to be released into the wild one day, they need minimum human interaction. Usually Orang Utans have to stay with their moms for their first 6-8 years but when separated from their moms and rescued, one human handler begins to play the role of their mother and teaches them how to build nests and climb up trees. 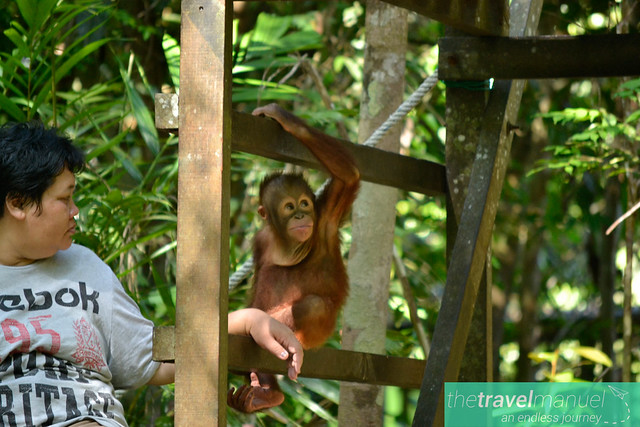 Buyee with the one handler who will look after him and teach him until he can do it all by himself and one day be released into the wild. 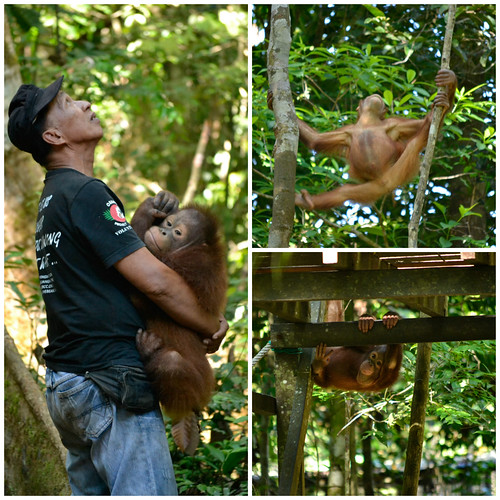 Even though the birds and animals are the purpose and appeal of the river cruises, I found myself delighting in the pure enchantment of the rainforest on either side of the Kinabatangan banks. Our guide, Jamil, took us down narrow estuaries each displaying their own unique flora. Ancient trees with giant trunks stood tall beside the river, whilst other mangroves extended their branches down into the water flow.

Lime green willows swayed just above the surface and sometimes our boat glided right into a lake of lilies and ferns. Purple and yellow blooms sprouted on certain trees and tiny green and purple apples on others. It is a wonderland for photographers and botanists and with the chirping of insects, birds and call of the wild; it was the most beautiful backdrop for a boat ride. 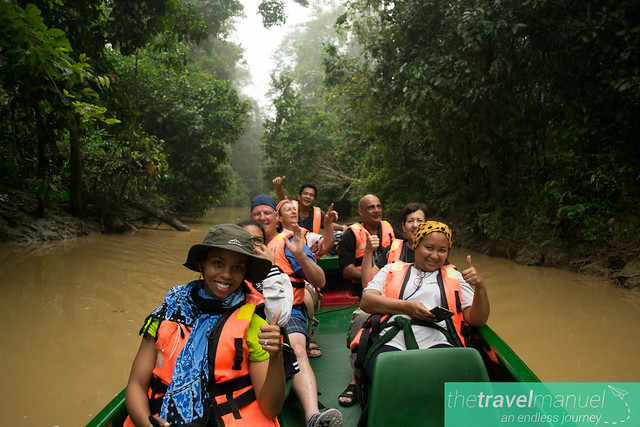 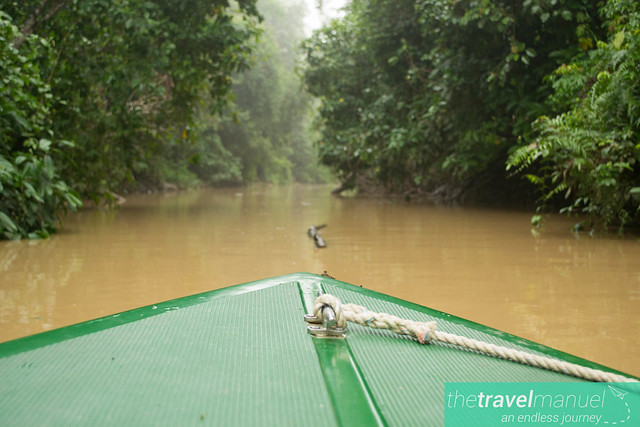 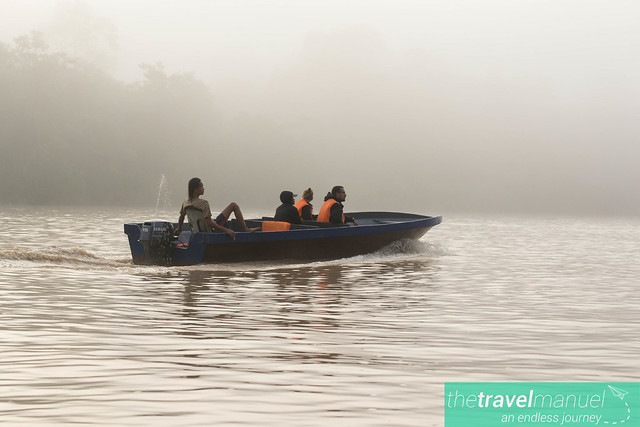 4. Frogging in the rainforest.

I never imagined that searching for frogs would be enjoyable for me. In fact wandering in the rainforest in the Kubah National Park at night with nothing but a guide, Dominic and a small flashlight was quite eerie and exhilarating. Once night falls, the forest becomes alive with the noises and activities of the nocturnal and it took me awhile to relax and stop shining my torch fearfully at every passing branch and tree above me to check for spiders and snakes.

In the tiniest frog pond area, we found over 22 species of frog alone. Bright green ones, brown and black dotted ones, the second tiniest frog close to the side of a thumb and a horn frog that literally resembled a miniature batman. It has got to be one of the most thrilling experiences I’ve had in the wild, but this should not be attempted without a guide. 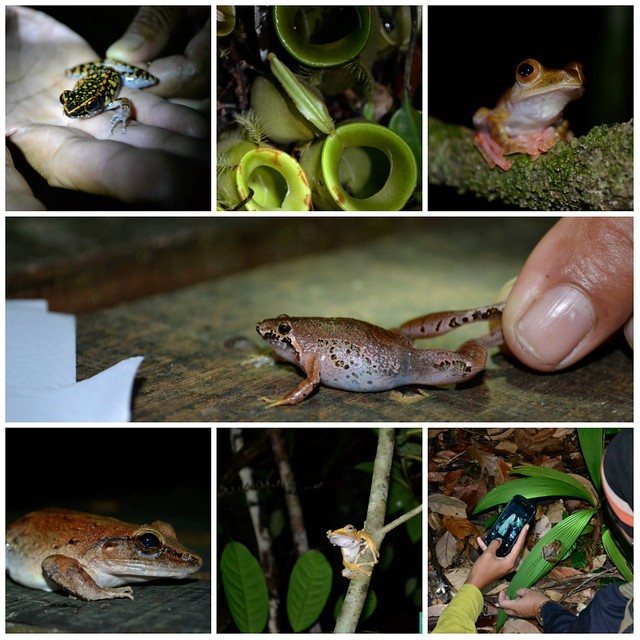 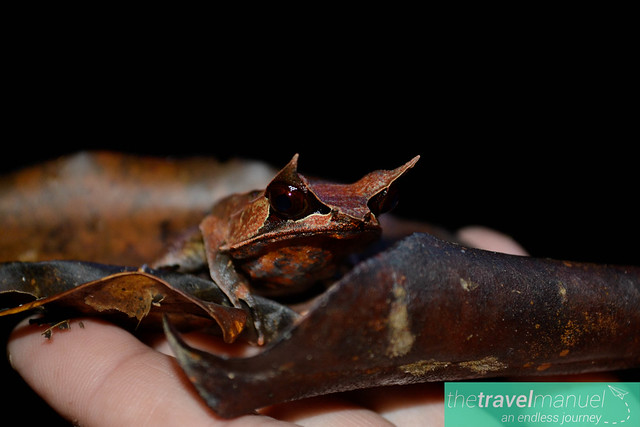 The Horn frog a.k.a Batman.

5. Searching for fireflies at night.

After swimming at an island during the day, we zoomed through the wetlands in search of crocodiles and fireflies in the dark. We spotted a crocodile on the river banks and watched it take off at the speed of light once we came to close. I lay down at the front end of the boat staring into the darkness of the trees when all of sudden I thought my eyes were deceiving me. Either, I was falling asleep or bright little lights seem to be flickering in two trees beside the boat. Others verified my delusions as fireflies. Sure enough there they were ‘switching’ on and off like tiny Christmas lights. It is close to impossible to capture on camera but something magical to behold.

For more information contact Sarawak Tourism with regards to a Kuching Wetland Cruise.

Along our boat cruise which left from Telaga Air Jetty in Sabah, we stopped at the Salak riverside village built almost entirely on stilts. As the sun began its descent over the ocean, in the best light of the day, we met some of the most wonderful people and children. We had a tea with a man who had spent years building his own house by chopping into the hill, we watched young boys playing badminton on the wooden jettys which were their streets and saw the men of the village play soccer on a the one bit of land they hollowed out amongst the rubbish which washed up and cemented itself in the mud below their houses. 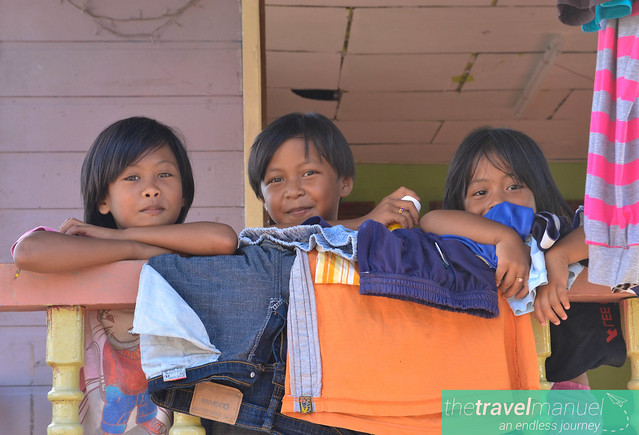 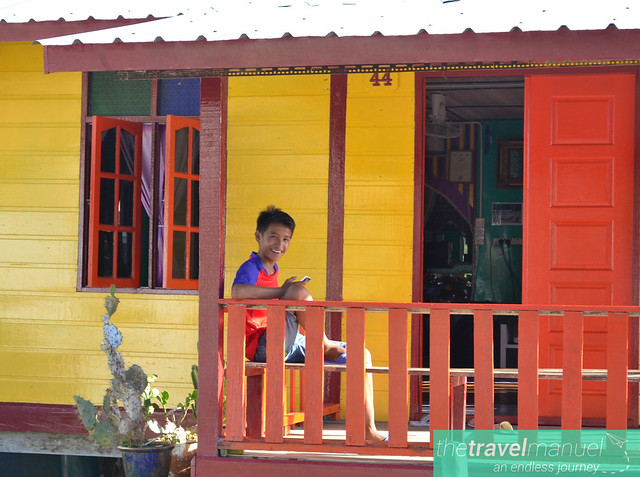 7. Homestay with a Malay family in Telaga Air.

I am yet to meet an inhospitable Malay person who won’t feed you, give you drinks and make you sit down and relax within the first few minutes of meeting them. Our host mom was no exception. We had the pleasure of staying with her and her family for a night. In the short time we were home, she presented us with the most lavish meals including chicken, fish and beef, vegetables prepared with the most incredible array of spices. She spoke no English, but her warmth and generosity said so much. 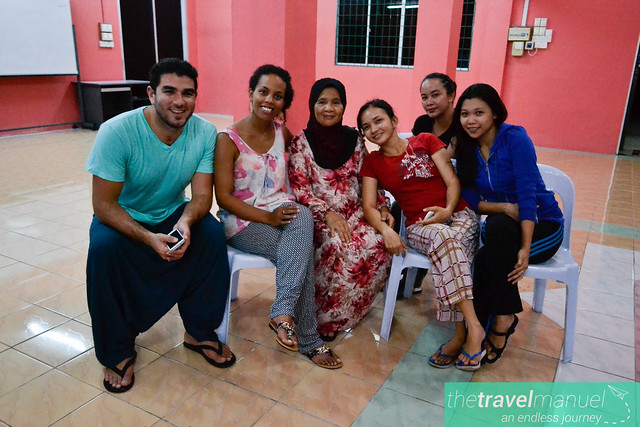 Vaughan and I with our host mom and sisters. 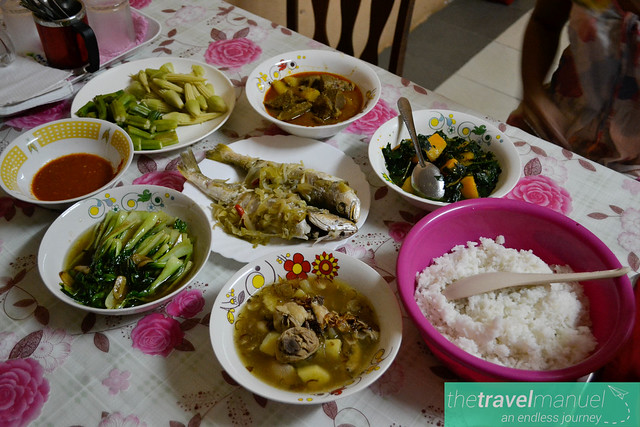 Just some of the incredible Malay cuisine she cooked for us.

From Telaga Air we took a 45 minute book ride to the island of Satang Island Besar. With crystal clear waters, outcrops of islands close by and palm trees providing shade just off the beach, this slice of paradise was the perfect place to stop for a day of lazing on the beach, swimming and perhaps seeing sea turtles if you’re lucky.

After trekking in the humid rainforests, this is exactly what we needed to keep cool. It will cost RM150 for 4 people to be ferried by boat to the island and a further RM 40 for National Park fee. There is an option to stay overnight, but the accommodation is drastically basic and unless you’re really willing to rough it, I would stick with a day trip. Plus there are so many islands just off the coast of Borneo with incredible underwater worlds for divers and snorkelers. 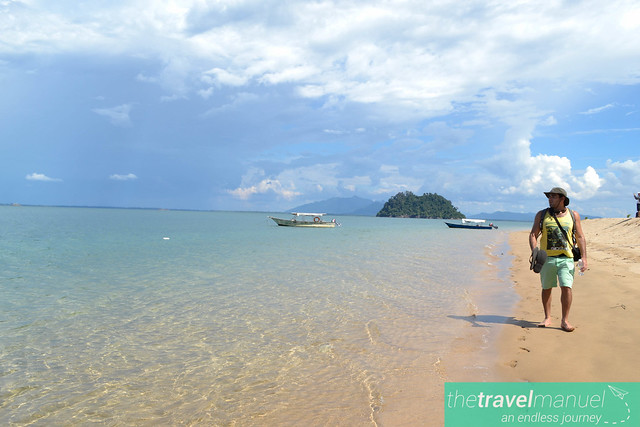 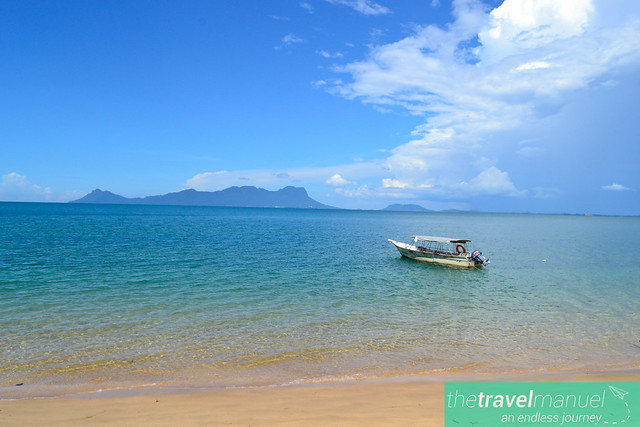 9. Educating yourself and others on the threatened rainforests.

The sad truth is that in Sabah alone, 85% of the Lower Kinabatangan rainforest has been sacrificed for agricultural uses as palm oil plantations. Whilst the government has put boundaries into place, these boundaries serve largely to protect the lucrative palm oil industry and not the rainforests. For example on our river cruise along the Kinabatangan we were told that the government has asked that only 100 m of rainforest be left intact beside the river.

All the animals including Orang Utan, pygmy elephants and proboscis monkeys face endangerment and one day extinction. The elephants need a large feeding range and with less forest they are forced into smaller areas of the forest where inbreeding occurs. Also along with the Orang Utans they face conflict with the local workers when they damage crops. 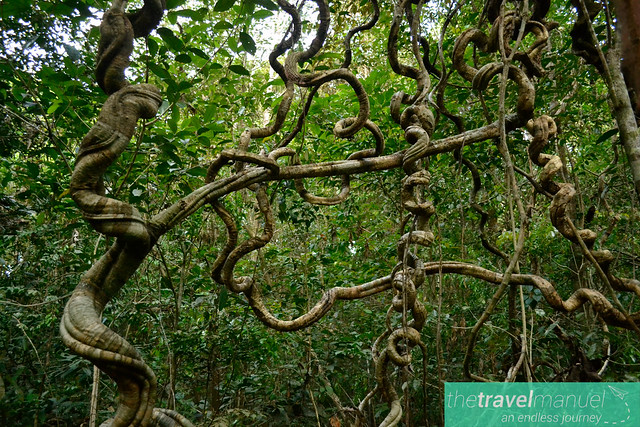 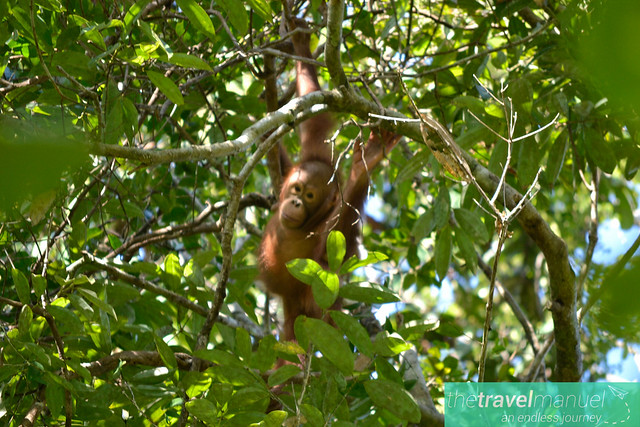 The future looks dim for these Orang Utans and all wildlife who call the rainforests of Borneo.

Whilst I have experienced my fair share of breathtaking sunsets, I have to admit that none were quite like those in Borneo. Both on the beach in Kota Kinbalu and out on the water off the coast of Telaga Air, as the sun descended the sky ignited into strips of illuminating wildfire that changed its fiery hues every few seconds. Its performance in the sky was tremendous alone but then it rested on the water and glowed over the ocean in rainbows of red, orange and yellow. Make sure you experience a Borneo sunset. 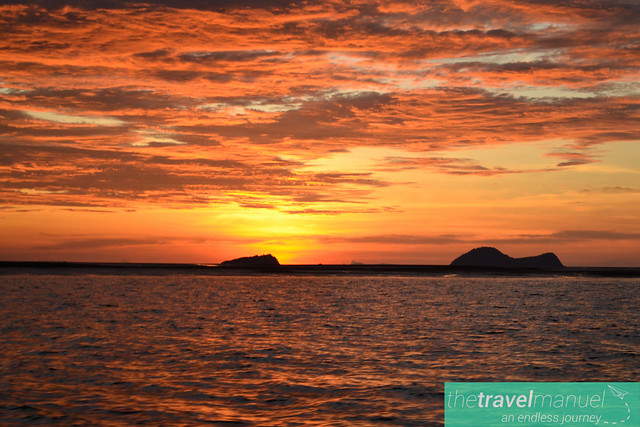 Have you been to Borneo before? What did you enjoy most about it?